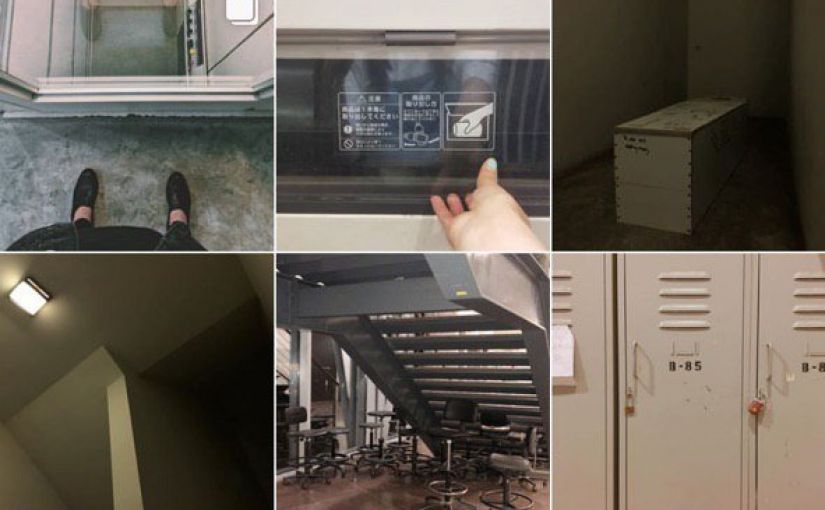 Pictured: A space under a staircase landing in the corner of the ADM basement. Within a nook is a coffin with writing handmade by my friend Nicholas Goh from his project ‘Face the Unknown’.

I chose this space as it contains a work created by my classmate in Semester 1 that was almost collaborative in the sense that almost everyone in the class had close input in how it was exhibited and culminated. It is also a place with a (now heightened) creepy as it is extremely dark and has a horrifying echo. This is especially so when you drag a plywood coffin into it.

This virtual alternative space of ADM is a culmination of many different perspectives from private to public. There are also common themes of posts which reveal aspects of the ADM culture, for example: eating, sleeping and relaxation. Additionally, there are pictures which reveal intimate connections to spaces of ADM.

I’ve noticed that as Week 1 went by and more students uploaded their #1010adm posts, the virtual space expanded as more perspectives and views were collated. Each individual co-creator added their own personal touch to the insight of culture in ADM and comments either provided further context or add new critiques.

Comments revealing shared experiences and reinforcing the reality of this alternative virtual space.

This project allowed co-creation through multiple individuals, in “DIY”, contributed to a shared channel of #1010adm. With this, the “DIWO concept” comes about where a multitude of significant spaces/objects to different people is collected to create a new virtual space that is more than just the usual corporate pictures of the building. This alternative virtual space now reveals the intimate and inter-personal culture and habits in the school, as told by its students.