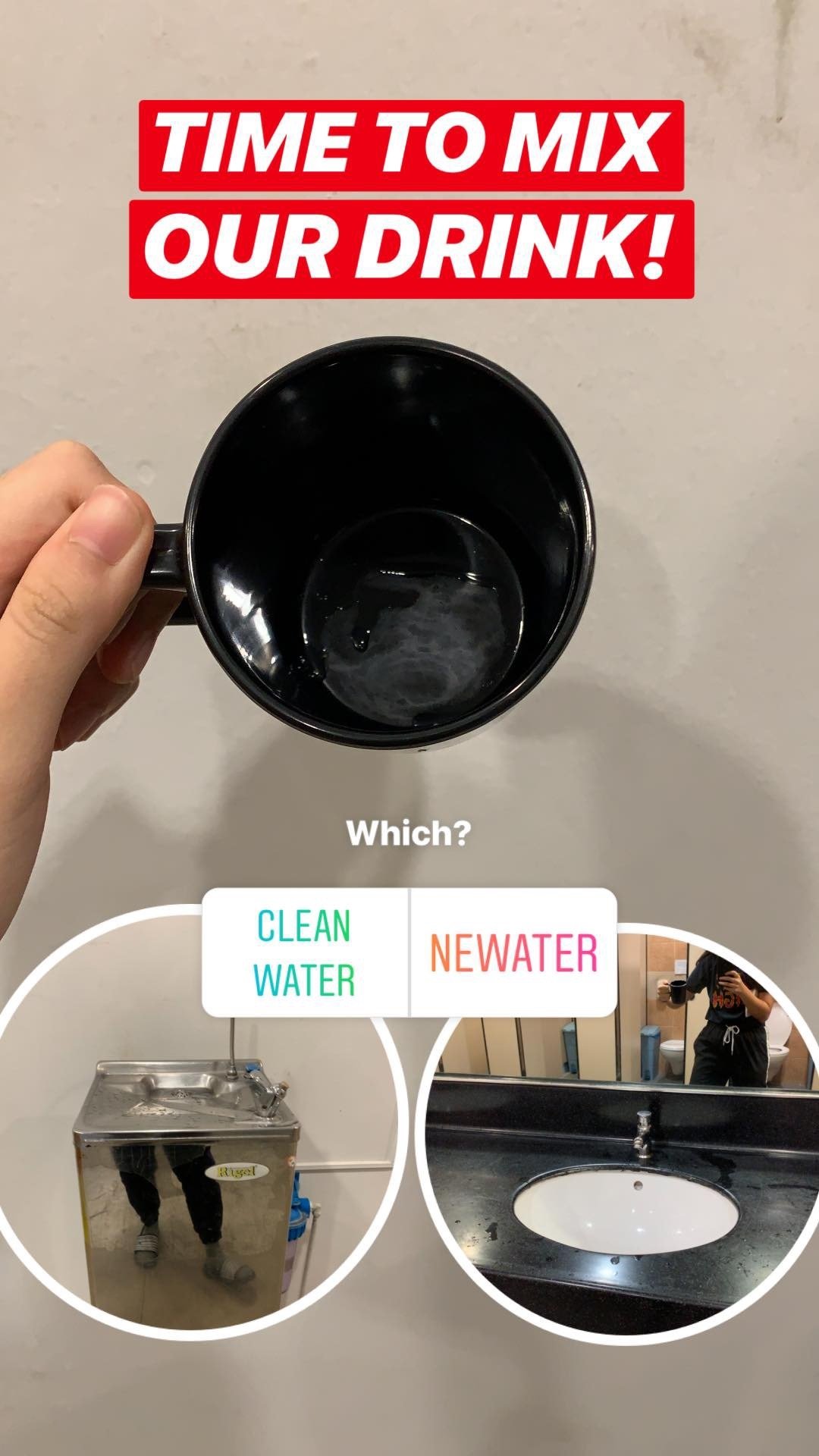 When Shariffah and I paired up to produce some crowd-sourced art, we wanted to do something that could relate to ADM students and to use items we can find in ADM. We listed some interesting things that we knew (coffin, stolen cups from the canteen) and tried to loosely plan the narrative/outcome we wanted to achieve.

We decided to use the poll tool on Instagram which would allow us to control the number of choices (two) and be able to collate response data easily afterwards. 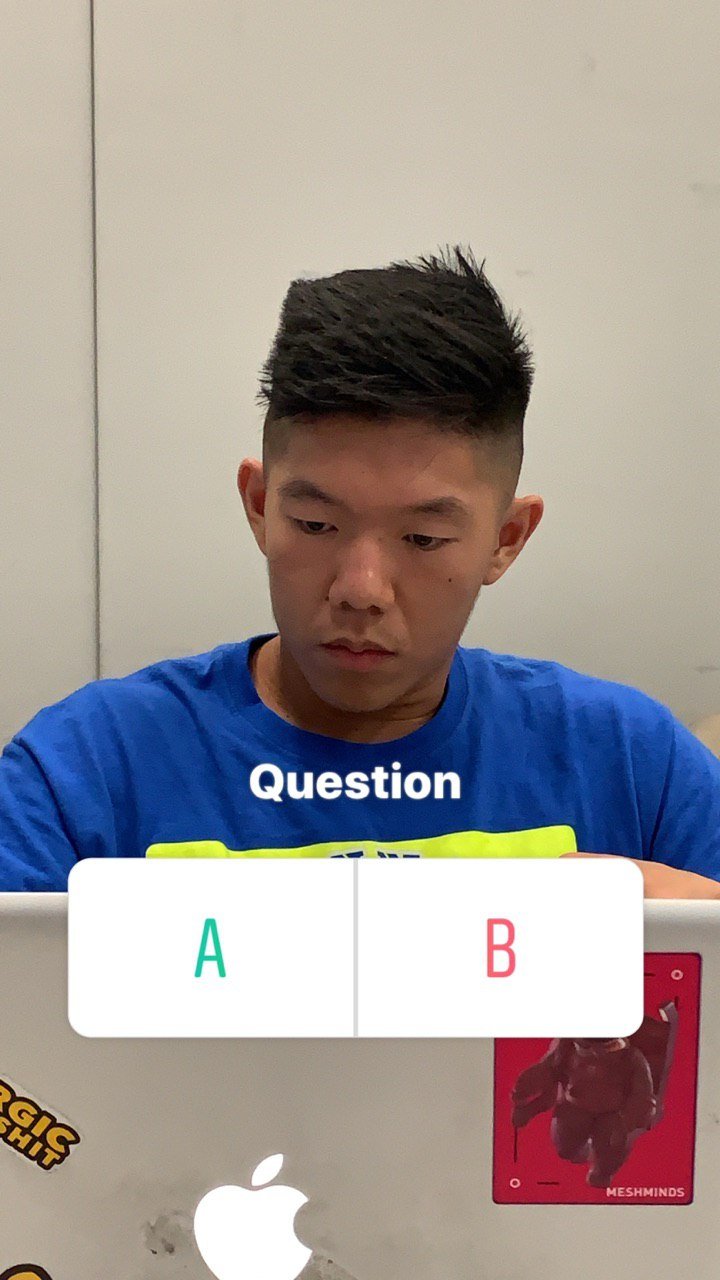 The simple format and layout of this tool is familiar to most Instagram users and students of ADM and thus we deemed it suitable for this micro-project.

From there, we were debating whether or not to have a linear or branched out “narrative” of our projects.

A linear narrative would suggest that we use one item and use the responses as a guide to what happens next to the same, original object.

A branched out path would mean that we would maybe provide 2-3 choices per object before we moved on.

As we could not see a distinct and continuous outcome the branched out path would produce, so we settled on the linear narrative route.

Initially we thought of allowing the viewers/participants to create a story out of the weird objects we chose, but we found that with the Poll tool it would be too restricting and close ended for an actual story. We also took the time limit into account and realised this would not be realistic.

We then thought of a pattern we could follow: Object A + Action 1 = Place X = Object B + Action 2 = Place Y = … where Object B would be found at Place X and so on. This aligned with our linear idea in the continuation of the actions but it still did not create the flowing idea we wanted to achieve.

Eventually, we concluded that we could use this platform of Instagram stories to create a 3-5 ingredient concoction (as we knew for sure that there were stolen canteen cups in the basement) by giving viewers a choice between this ingredient or that ingredient.

We then expanded on this to play on larger trends and themes in the psychology of a society; we decided to have one choice be mundane and regular and the other be something grotesque and out of the norm. Though we sort of guessed that most viewers would choose the grotesque options/ingredients, we were still interested to see the outcome (and eventually surprised from it).

After planning, we moved on to execution: we decided to use my Instagram account to have my followers vote for our drink concoction. However, we realised that there was not a lot of activity online so I had to make my account public and desperately beg people to participate in our activity.

Note:  The  screenshots timed 2:35pm+ were taken a day after the activity ended. Interestingly, the percentage of votes for each choice remained accurate to the outcome that we acted on during tutorial itself.

0. Our opening request to viewers of my story to ask for continued participation: 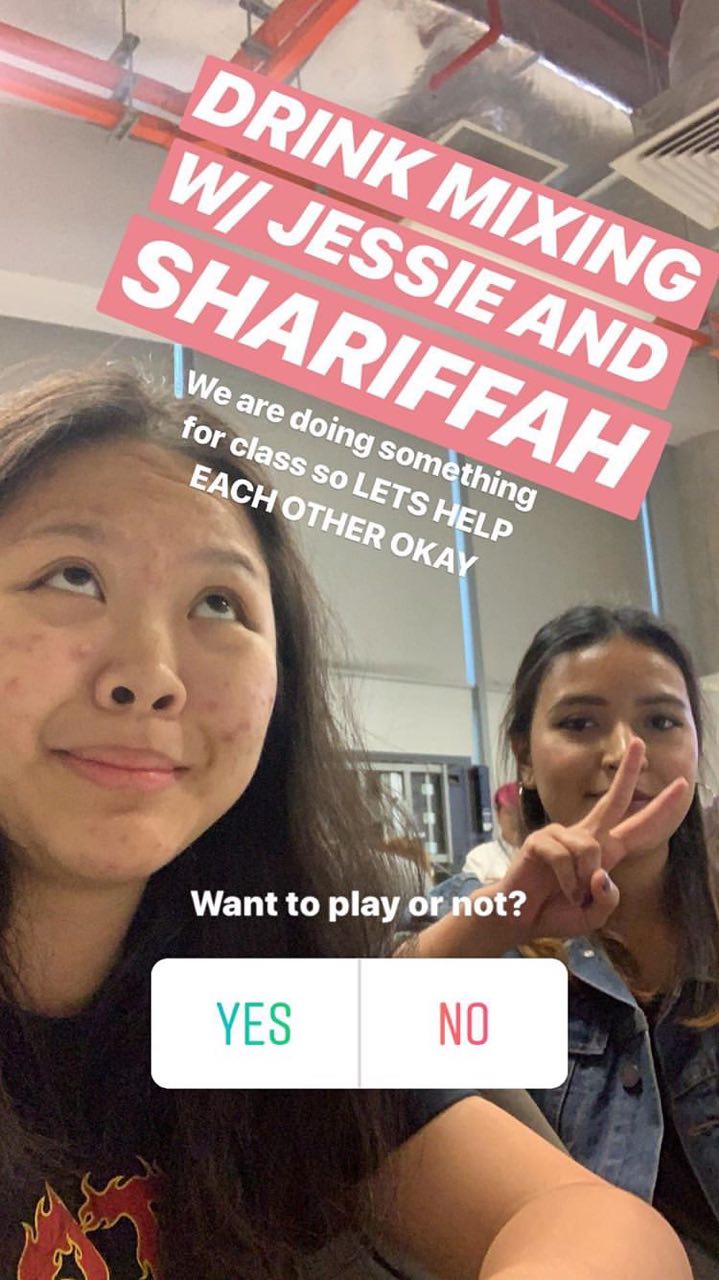 I felt that the added comment that it was “for class” convinced more people to stay out of goodwill.

1. Whether to wash the cup we found or just take it. 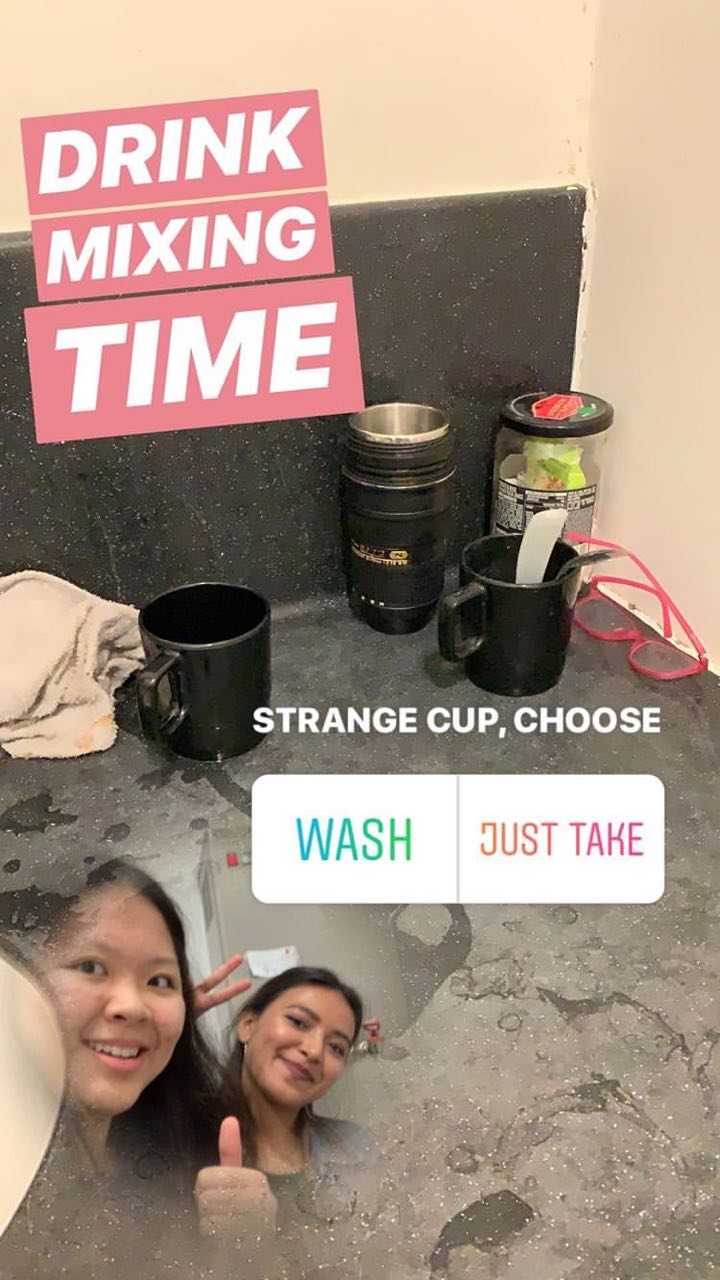 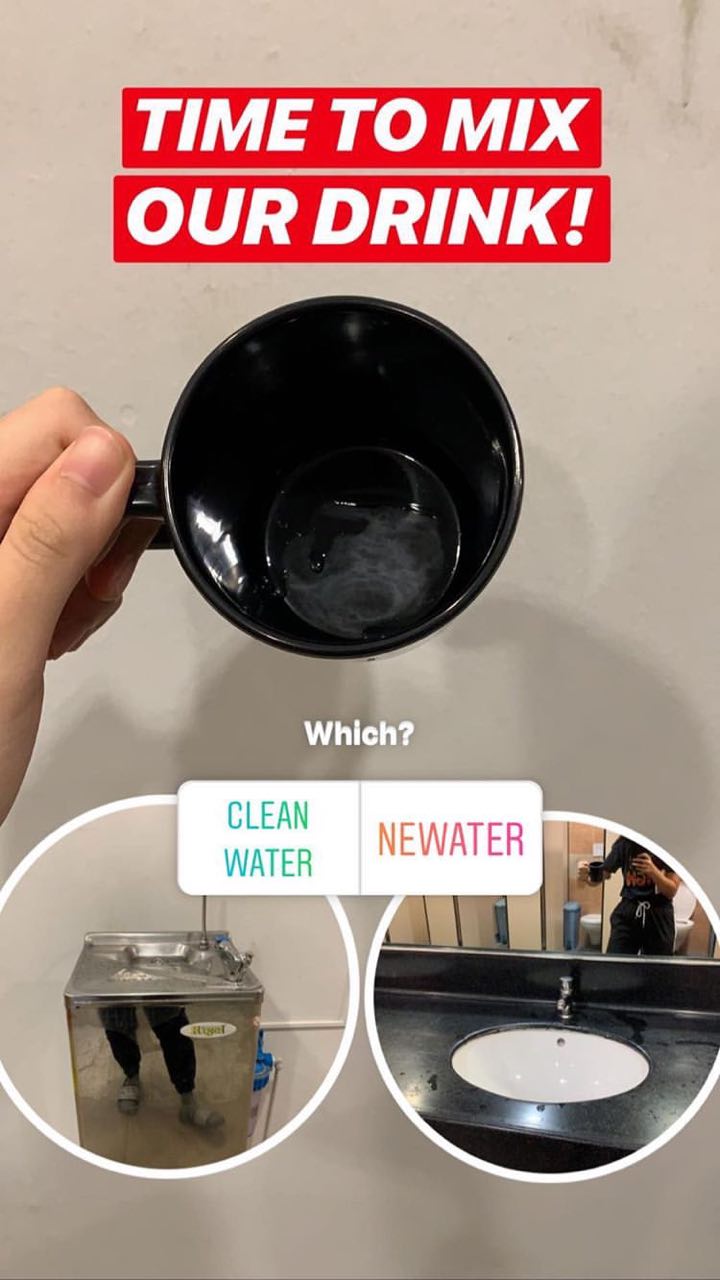 More chose NEWater. At this point during the tutorial, we realised that responses were coming in too slow to progress as far as we wanted (3-5 ingredients) so we started pre-recording certain videos and preparing to post them as soon as there were 5 votes (where either option would be the “winner”) respectively.

3. Whether to add M&Ms or spicy Tapioca from the vending machine. 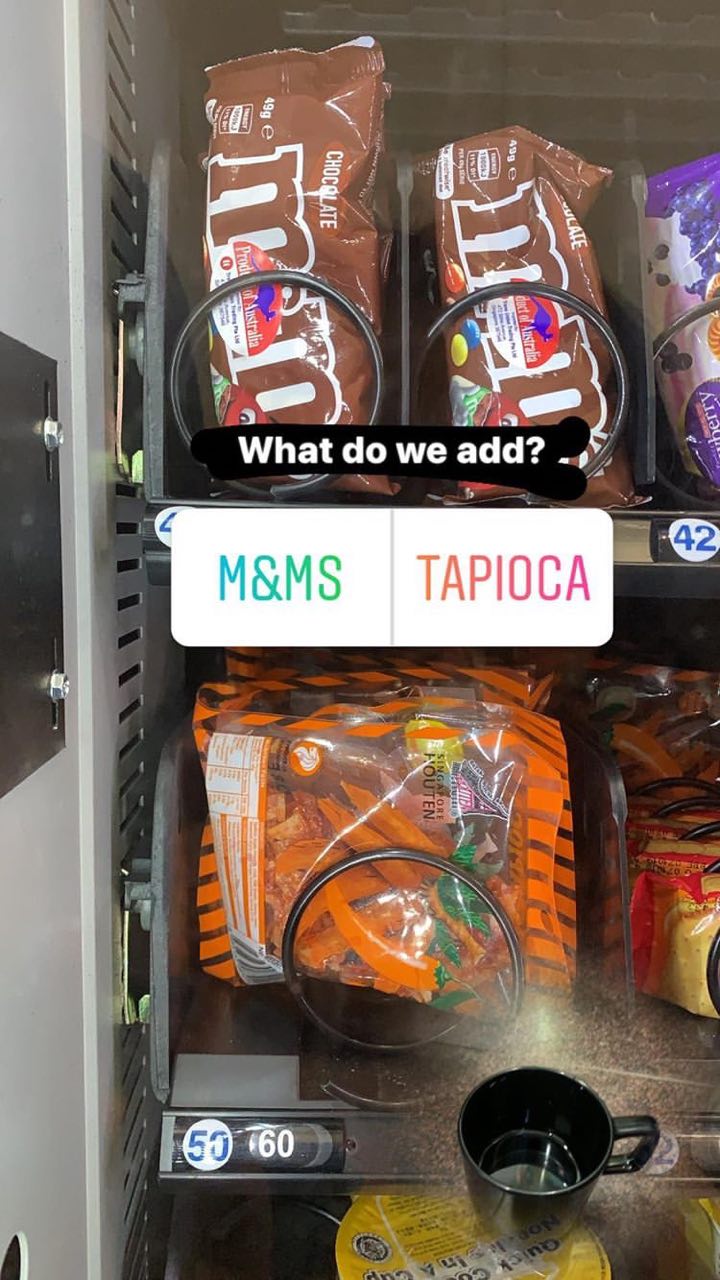 Most chose Tapioca. This confirmed our assumption that when given the choice between something mundane and something disgusting, most would choose disgusting.

I like to think that this particular percentage was closer as neither M&Ms nor Tapioca belong in a cup of water. (Also, we were lucky because the tapioca chips were one third the price of the M&Ms. haha. This is also the reason why we did not pre-record for these choices.)

Published video(s) of the Tapioca outcome:

4. Whether to add some Sandwich or Yoghurt into the cup. 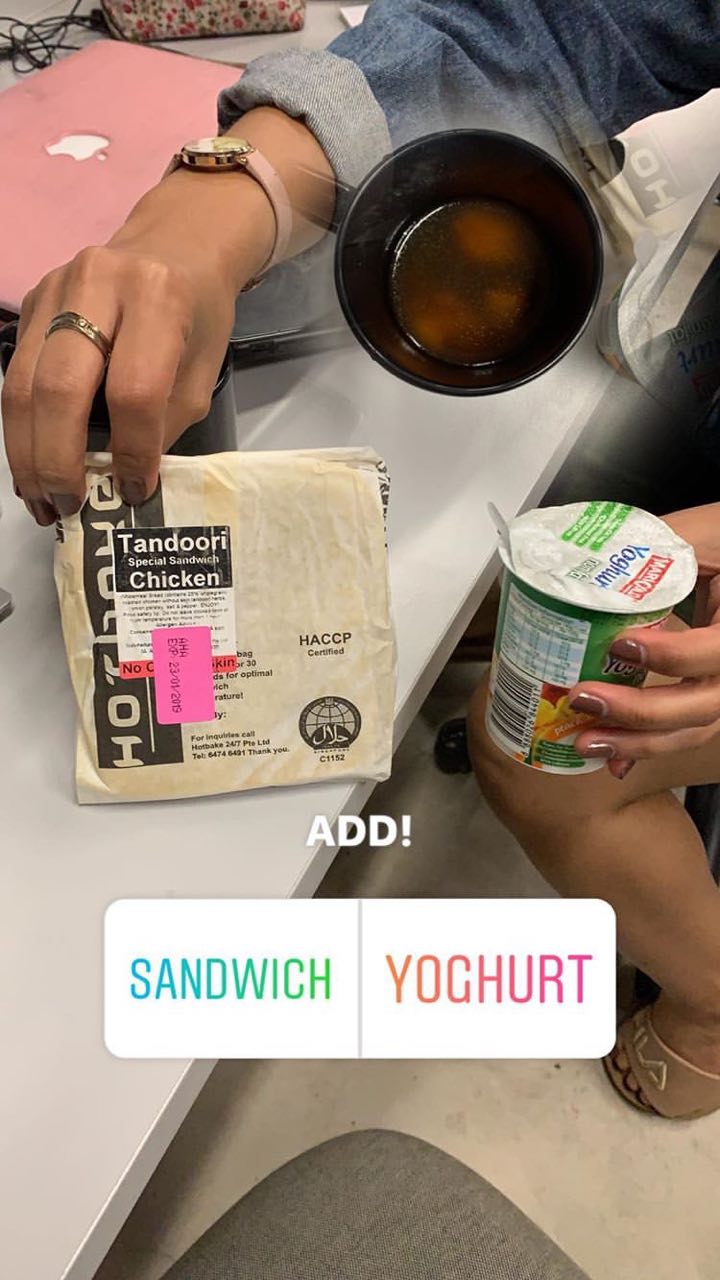 Most chose Yoghurt. Again, solidifying our hypothesis that our concoction was going to end up the grossest it could.

Published video of the Yoghurt outcome:

5. Whether to Jessie or Shariffah gets to drink our crowd-sourced cocktail. 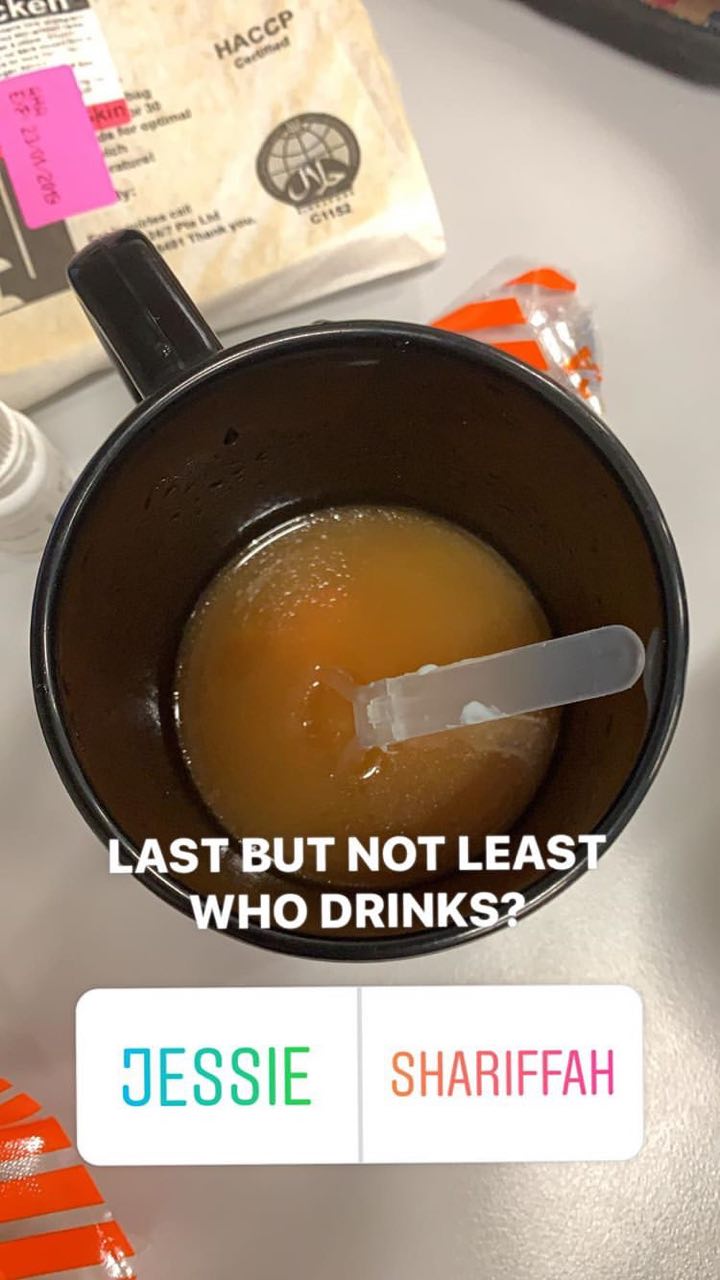 Most chose Jessie. We decided at the beginning of the project that out eventual outcome was for one of us to drink from the cup, but we chose not to publish this with the intention to avoid swaying the choices. As most of my followers are friends of mine, they would most likely want to see me do something disgusting (like drinking our spicy yoghurt-infused tapwater mixture)

Despite leaving this choice to the very end as the climax of our project, most voters still chose the more disgusting of the two choices.

Published video of the Jessie outcome:

In the end, I felt that our micro-project was a success as we produced a crowd-sourced outcome and managed to have a peek into the human psyche at the same time.

I believe the way we structured the activity was effective as viewers got to make a choice and then see an almost immediate outcome of their decision in video format. This aimed to make a viewer feel rewarded and powerful in this project which is important in having an active audience in a crowd-sourced work.

Though we as artists had the control of what the choices would be, the voters still independently determined the direction of the work (which turned out: disgusting but also entertaining). Thus, I do believe that despite the work being a crowd-sourced artwork, there is still a possibility and even a necessity to create some rules and control aspects of the work.

If I had the opportunity to do it again (with more time) I would have definitely taken this project out of ADM and into Canteen 2 where there are many “free” condiment options to choose from and possibly interact with the people who are physically there and buying food.