Task: In groups of 4-5, create a 1 to 3-minute collaborative performance that involves split-screen video chat features on social media.

Four collaborators use Instagram’s group video chat to create a 2×2 grid video of them singing the ABCs and freestyling. The video starts with a diamond shape created by the arms of each performer. Between each individual performance, each performer will “pass it on” in a clockwise fashion to the next performer. At the last part of the song, all performers synchronise to do the “floss” dance and end with an ‘X’ across the screen.

This was performed in different corridors of ADM and we aimed to create a video that was not just four videos put in a grid, but a final video where it looked like all four participants actually have interacted with each other.

‘Together Split’ was definitely the hardest microproject so far for me as I found it very challenging to communicate with three other people over the video chat and direct all of us as all of our screens showed different arrangements of the video.

Despite all these challenges, I found the experience very enjoyable as we all struggled together doing something ridiculous. 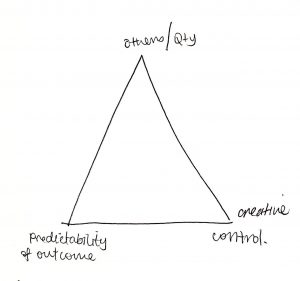 Out of all the 3 Micro-Projects,

I collaborated with Ik Hwa, Sabrina and Shariffah for this project. We wanted to utilise the Instagram Group Chat function because of its 2×2 grid and screen record it for the purpose of documentation.

We also considered using the Live function where you would also be able to have the same grid, but we decided it would be easier if us four were the only input and wanted to avoid more lag than necessary.

Trying to create a face with a quarter of each of our faces proved to be VERY DIFFICULT.
Despite this being a trial and all of us being in the same room/at the same table, we struggled so hard to communicate what we wanted from each screen.
We realised from the start that every screen showed a different arrangement of our self-recordings.
This meant that it was very difficult to arrange even a face as we were all looking at different “screens”.
The person screen-recording (me) would then have to direct the other 3 participants and this proved to be challenging. 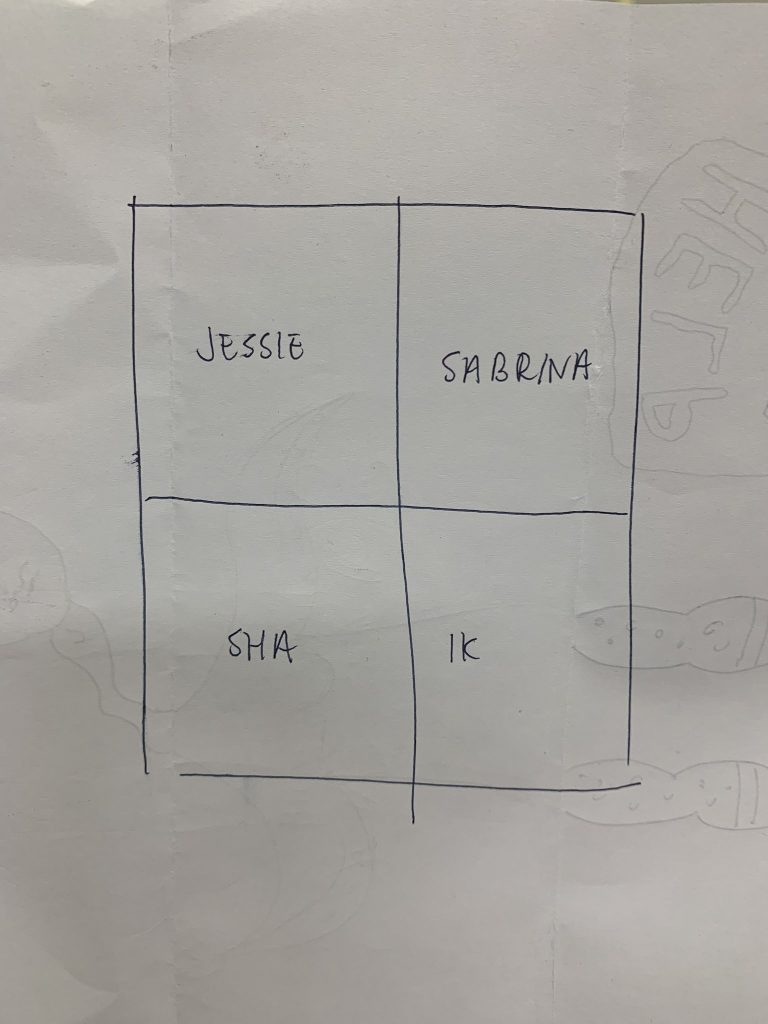 I drew out this diagram to try to help us as a group understand a visualise where each of our faces were.
This made the process clearer, but we still decided the face alignment was still too difficult and proved to be over-ambitious. 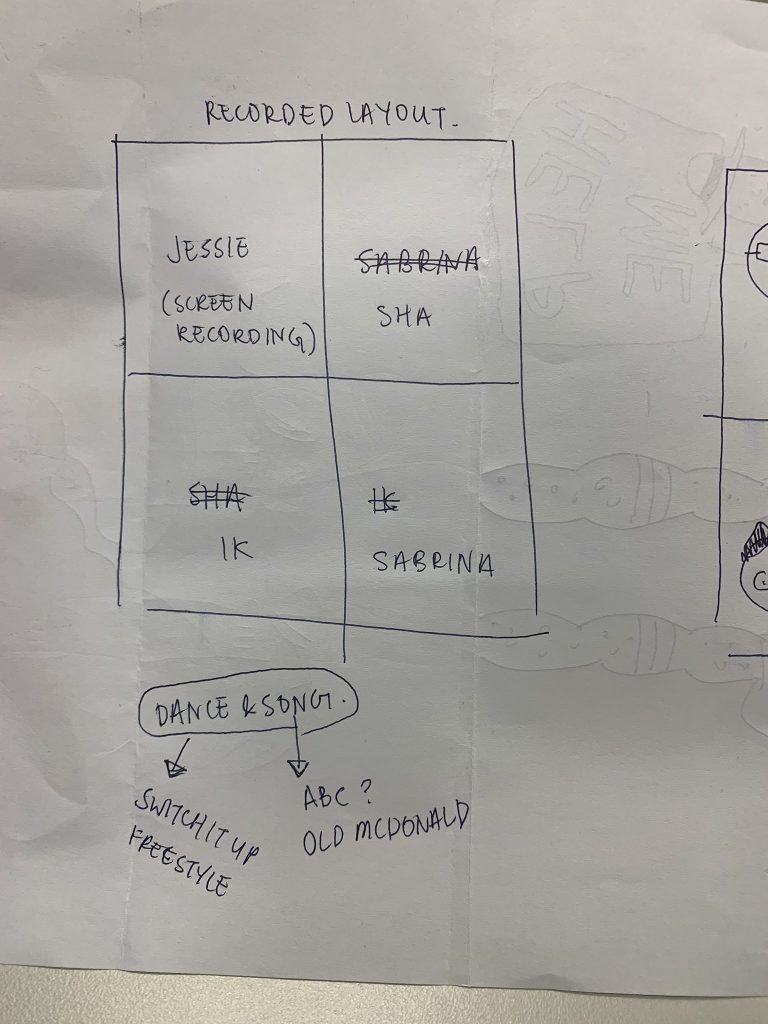 For the actual content of the video, we chose song and dance and then immediately
an issue with
choosing the song.
With four people with completely different music tastes, we deliberated for a while until Sabrina joked about doing the Alphabet song while freestyling.
Even though it was a joke, it turned out to be the best option for four of us to do.
In between recording the song and dance bits, I suggested that we make some “bigger pictures” that included all of us as a whole video. So we created an X and a Diamond with our arms. This was a little difficult as even though we now know which corner each of our videos would be in, the arrangement across the phones was still different. It was thus really difficult for some of us to visualise and form the shapes.
But I think it was a nice touch to have us all form a unified shape for our video.
Choosing our locations:

Meeting physically to discuss our next actions as we found it difficult to communicate over the video chat:

https://youtu.be/3BEEmotleyw (video has problems with embedding)

Having many call problems:
Final receipt of our 50+ minutes of recording for our ~1min final:

When we thought we got the final take of our Song and Dance, we cut and reviewed the footage and realised there was NO SOUND!

We did encounter this problem previously but assumed it was because I did not choose the microphone option. Despite me turning the microphone on this time, the audio still did not record and we were so focused on completing our takes that we did not realise.

In hindsight, I think the Instagram group chat function mutes the microphone recording in order to actually have a functioning call.