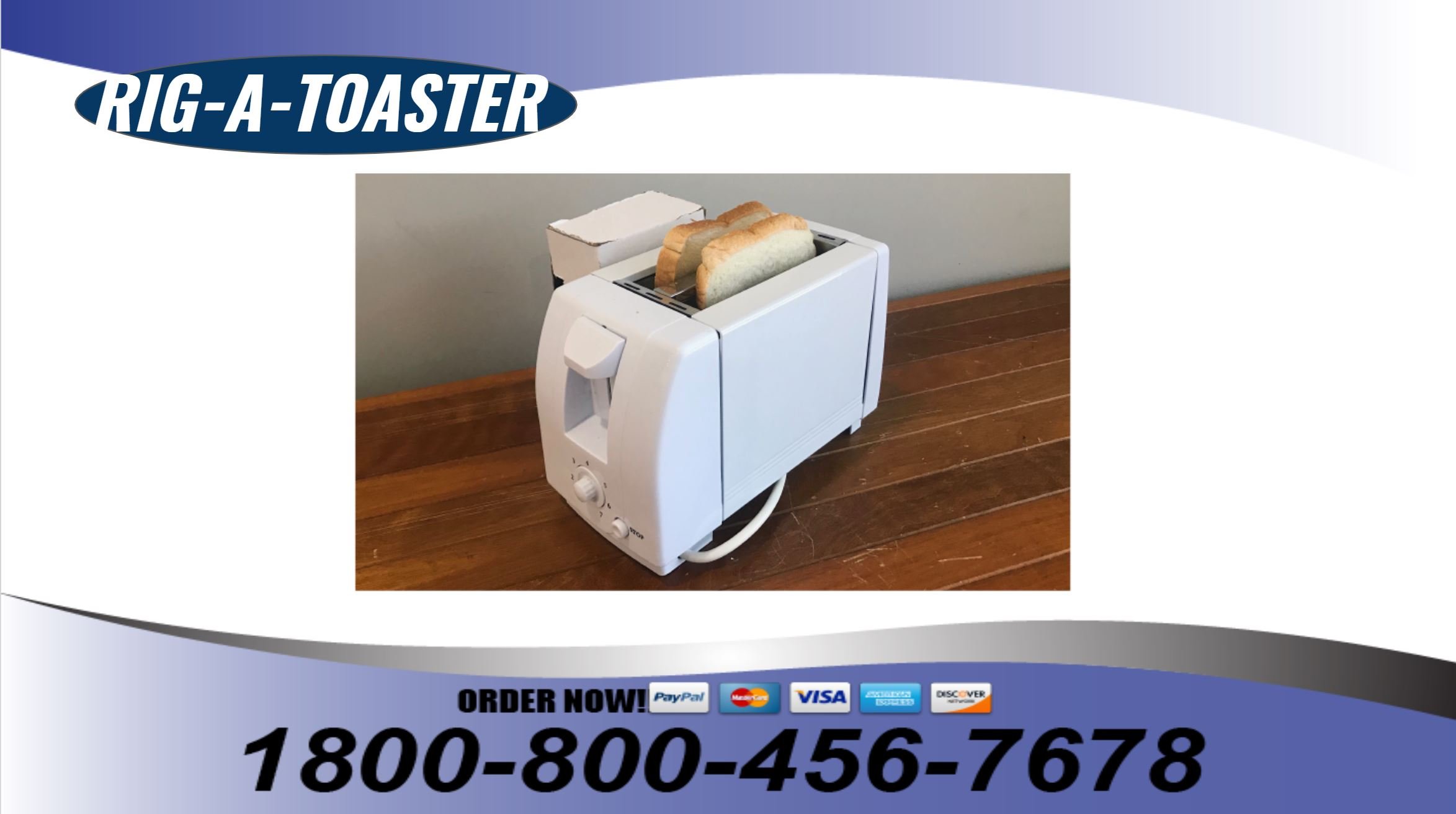 This project was done in collaboration with Shariffah!

Click here for the link to our presentation slides!

In this project, Shariffah and I worked together to “hack an everyday household object so that it behaves in a way you least expect. It is an object that disobeys.” 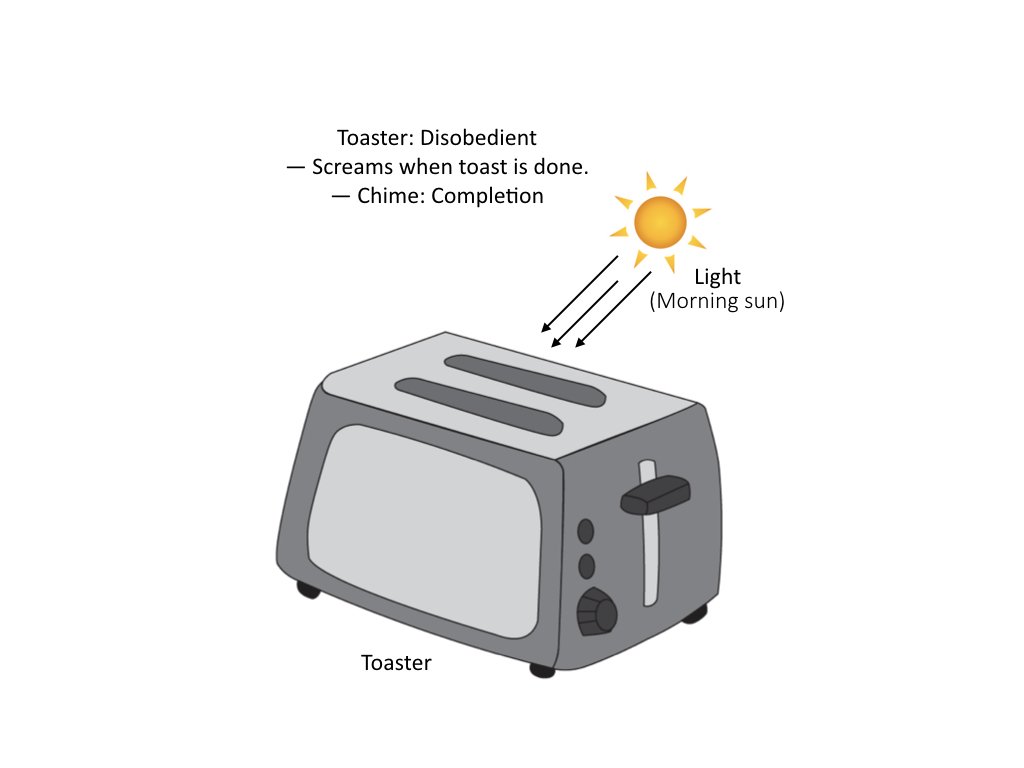 Initial Idea: A toaster that screams when your toast is done.

Comments: Why is it screaming? Is it to annoy the user?
Edited Idea: A toaster that has a completion chime when your toast is done. 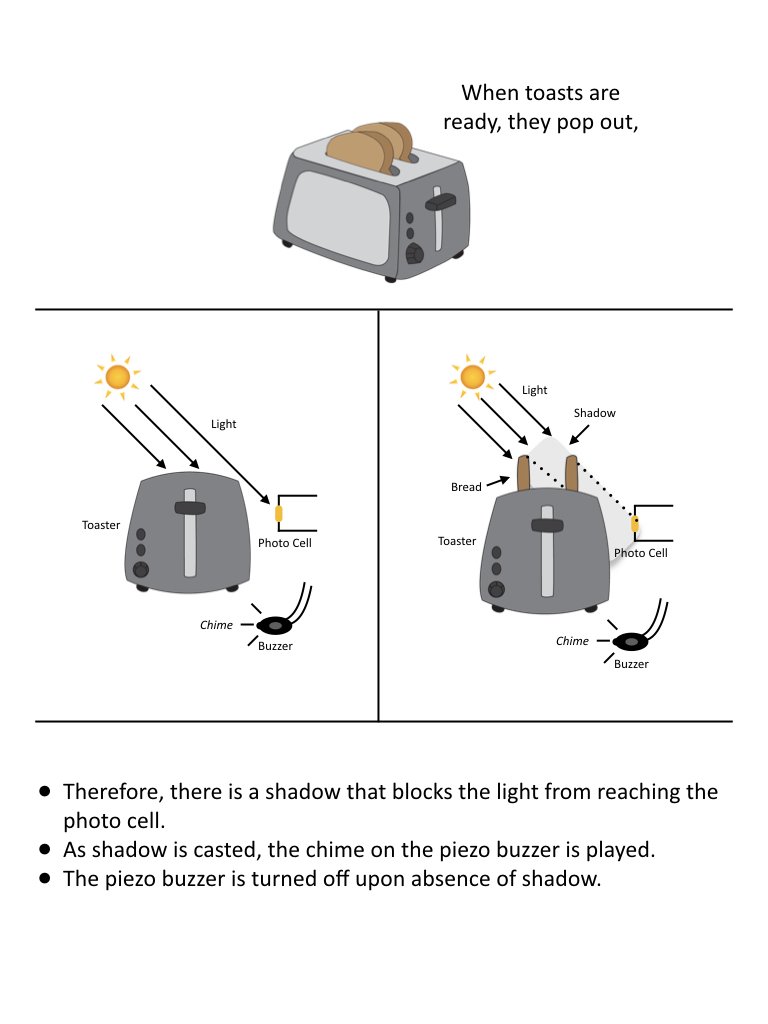 Hypothesis: When one makes toast, its usually in the morning, when the sun shines into one’s room and is the only light source.

We sourced for a familiar completion chime online and one that came to mind was the Level Complete music from Super Mario Bros. This is an ideal chime as it is familiar and already in 8-bit which is playable by a piezo buzzer.

Here is the code for the chime by Arduino Forum user Linkaan: https://forum.arduino.cc/index.php?topic=393731.0  [CODE 1]

This code plays the chime once as it is not meant to loop, so we would have to input it into our major code later on.

Adding a photocell (sensor) to detect the light change to trigger the piezo buzzer (actuator).

I followed the schematic and code provided in the syllabus, and used the Serial.println function to determine the level of threshold I wanted to set.

This was an important step as the lighting would change based on the location this object was going to be set up. 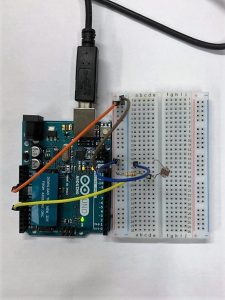 With this, we wrote a pseudo code to understand how we wanted the sensor to activate the actuator: 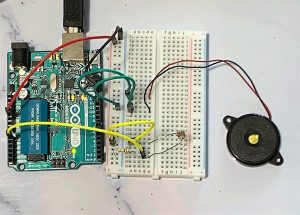 To achieve the code, I modelled the new code based off of this code from the syllabus (p.32):

And changed out the ledPin code for the Mario Chime on the piezo buzzer. See [CODE 2]

After compiling the base code, I realised that there needed to be an option to turn ON/OFF the loop. Otherwise, any shadow that passes over the photocell will activate the buzzer.

This would not make sense as we only wanted the chime to play when the toast was popped up, so I researched and did multiple trials to create an ON/OFF switch. 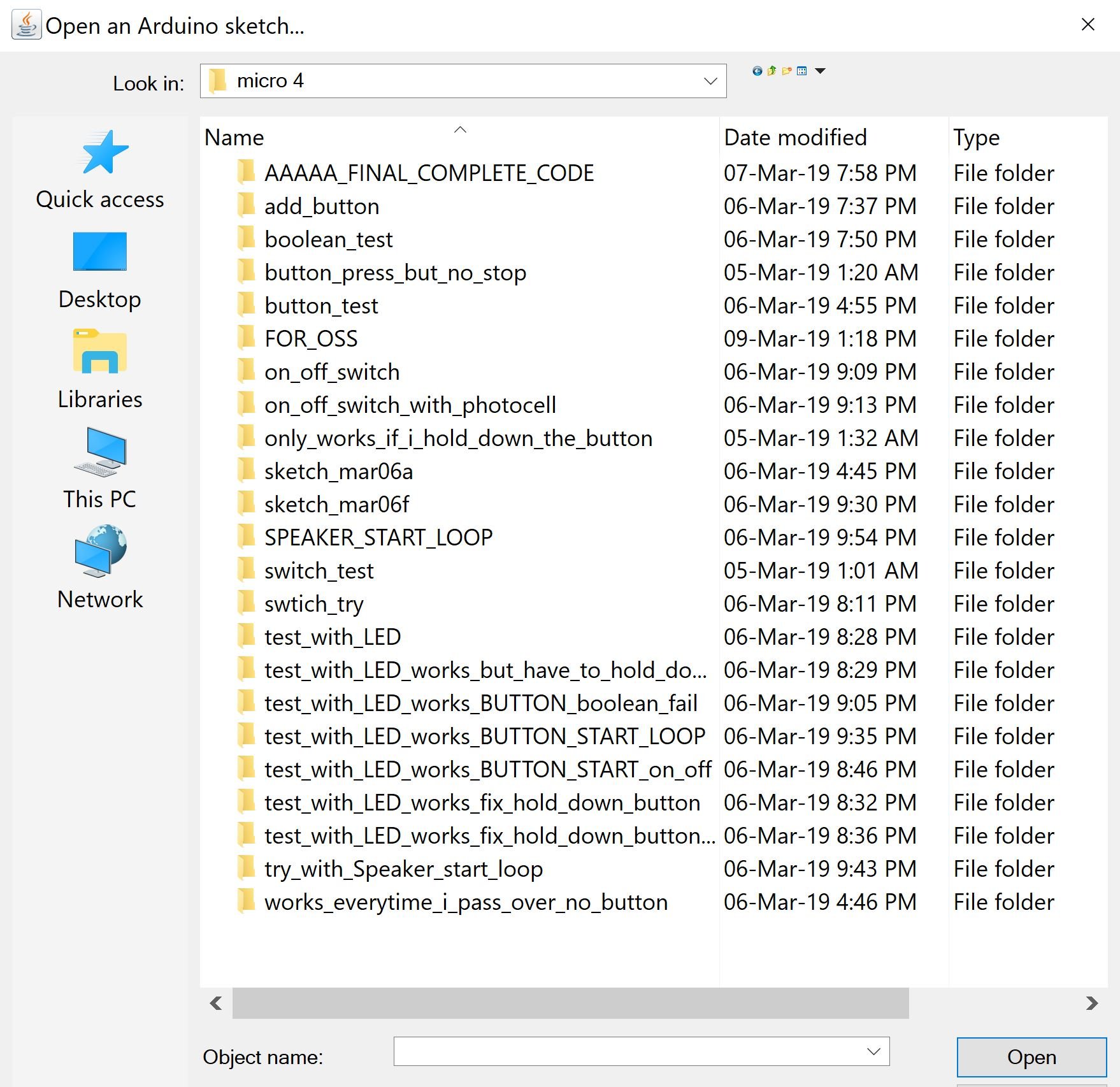 I did the button tests by replacing the buzzer with an LED as I started going stir crazy hearing the chime so many times. 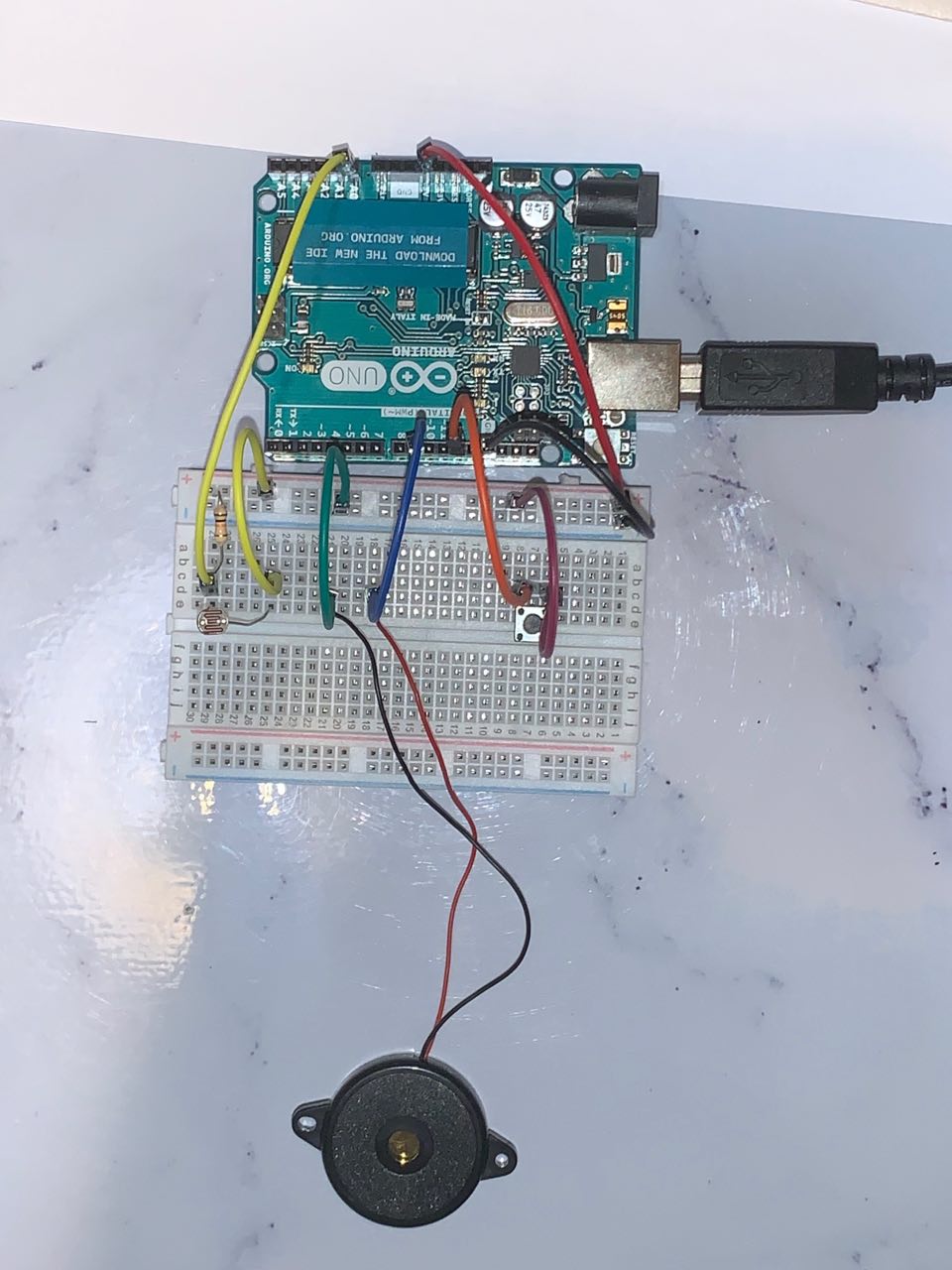 These tests worked perfectly fine with the LED but when I added the rest of my code I realised that it would not be able to apply the same way to the photocell+buzzer loop.

With the photocell+buzzer loop, it was a more complex code that was not simply an on/off led as it had conditional ‘if’ statements.

For example, this code only started the photocell+buzzer loop if the switch was continuously held down. See [CODE 3].

Thus, I had to do more research.

I catered my search input a bit more and instead of “on/off switches”, I searched for “switch to start and stop void loop()”. I found this Reddit post that had this suggestion:

Adding the suggested code into setup()

This solution worked as an ON button for the code: the photocell would only activate the buzzer after the button was pressed the first time.

However, after the first press, the code would keep looping and there was no way to stop it besides the reset button on the Arduino or unplugging the whole Arduino.

I kept trying to implement a start/stop button with the code from test #1 and #2 but kept running into the same problems.

I even tried to implement some boolean states and not! functions: 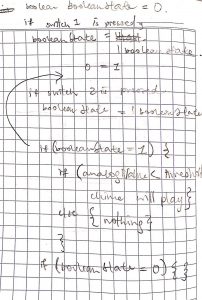 but was continuously unable to apply the code with so many conditions.

Since the only way to restart the loop to ” while (digitalRead(buttonPin) == LOW) {} ” was to press the inbuilt reset button on the Arduino, I looked online to see if there was a possible external reset button:

This was the perfect solution as the RESET pin does not require any coding. 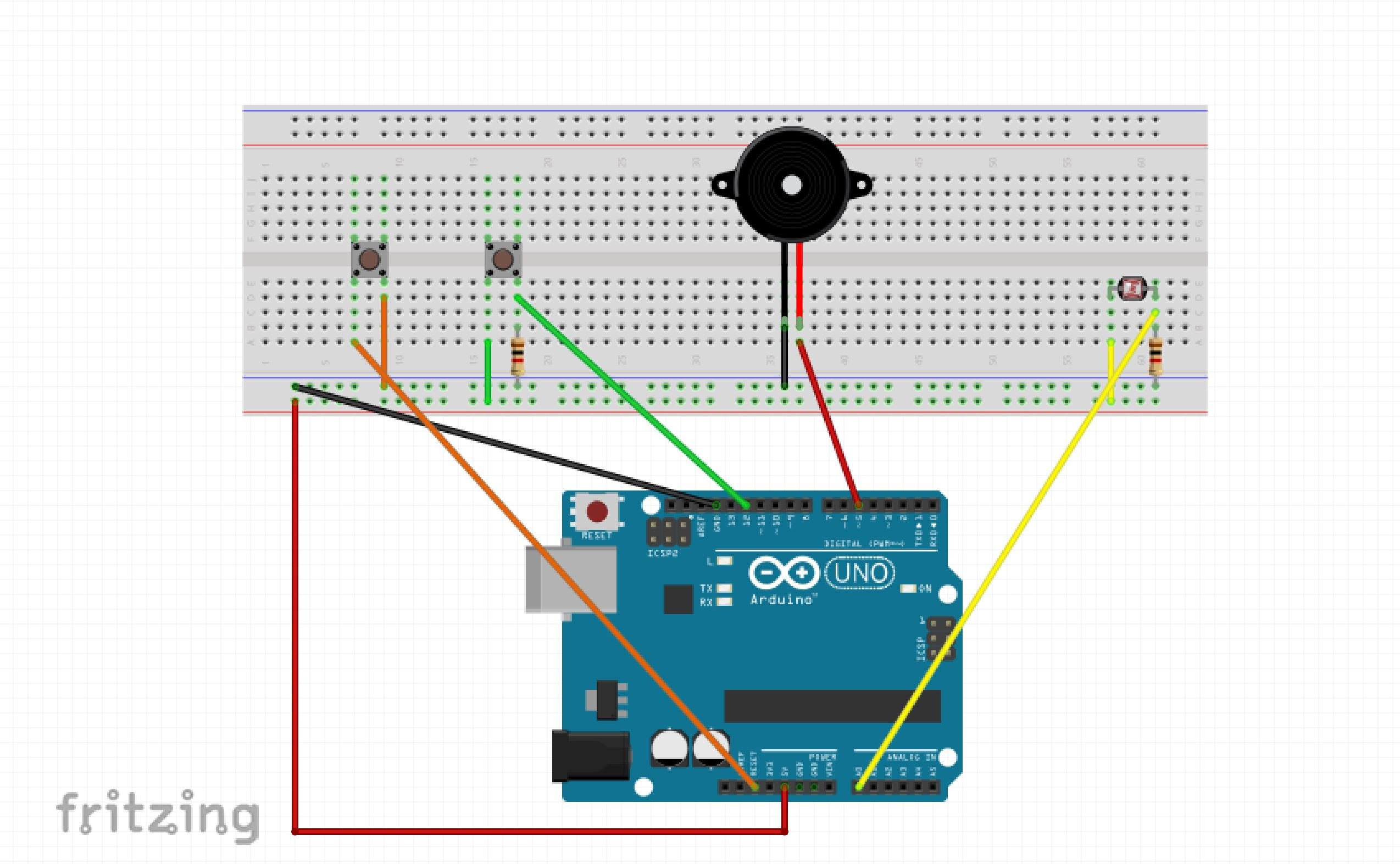 After this success, both Shariffah and I felt that this “Disobedient Object” was not as disobedient as we wanted it to be. Though useful in alerting a person that their toast is done, it lacked that prank aspect.

I decided to have a “time limit” to reaching your completed toast before the happy, completion chime turns into an annoying siren to aggressively alert the user and continues until the toast is taken out.

Basically: Users have one minute after their toast is done to reset the machine before it starts the sirens and then 20 seconds before the seemingly endless screech!

Problem: After photocell reads a shadow, the chime does not stop until the reset button is pressed. This is especially problematic now that the chime loops and plays a siren.

Solution: Create an array for the chime!

With the help of the syllabus (p.80) and my little brother finding

We formulated a code that reads:

We changed tone to buzz as that was what the original code was based on and added the chime[][] array:

and incorporated for loops that can be interrupted by conditional statements. 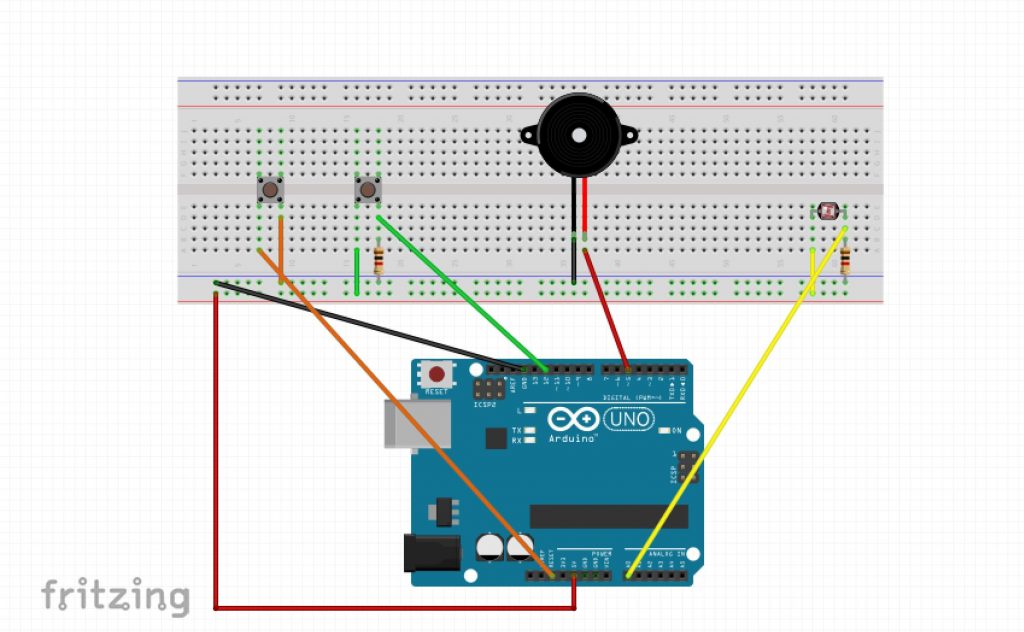 Knowing how messy the Arduino set-up would be, we decided to add a WHITE BOX, to store all the wires, board and Arduino neatly away from sight.

We punctured holes for the photocell, buzzer (for better sound emittance) and switches to mount them on to the box.

This was our sketched plan: 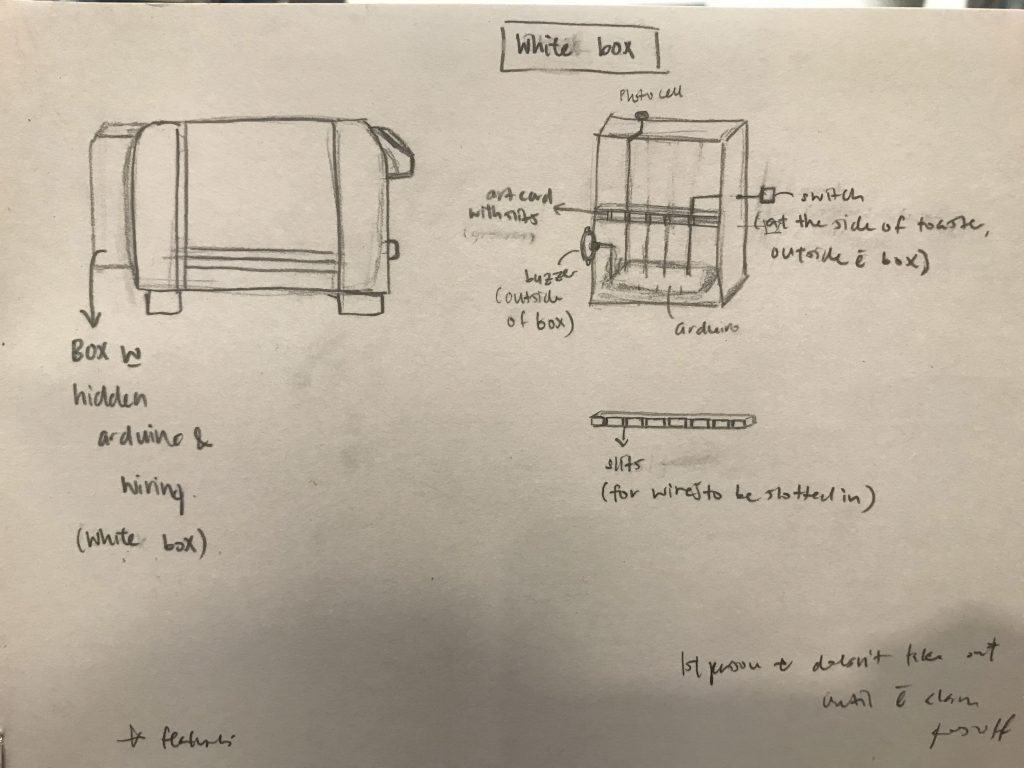 Fitting all the components in proved to be a lot more challenging than we anticipated. It took a lot of rewiring and delicate finger work to get all of the parts in and for the set up to work.