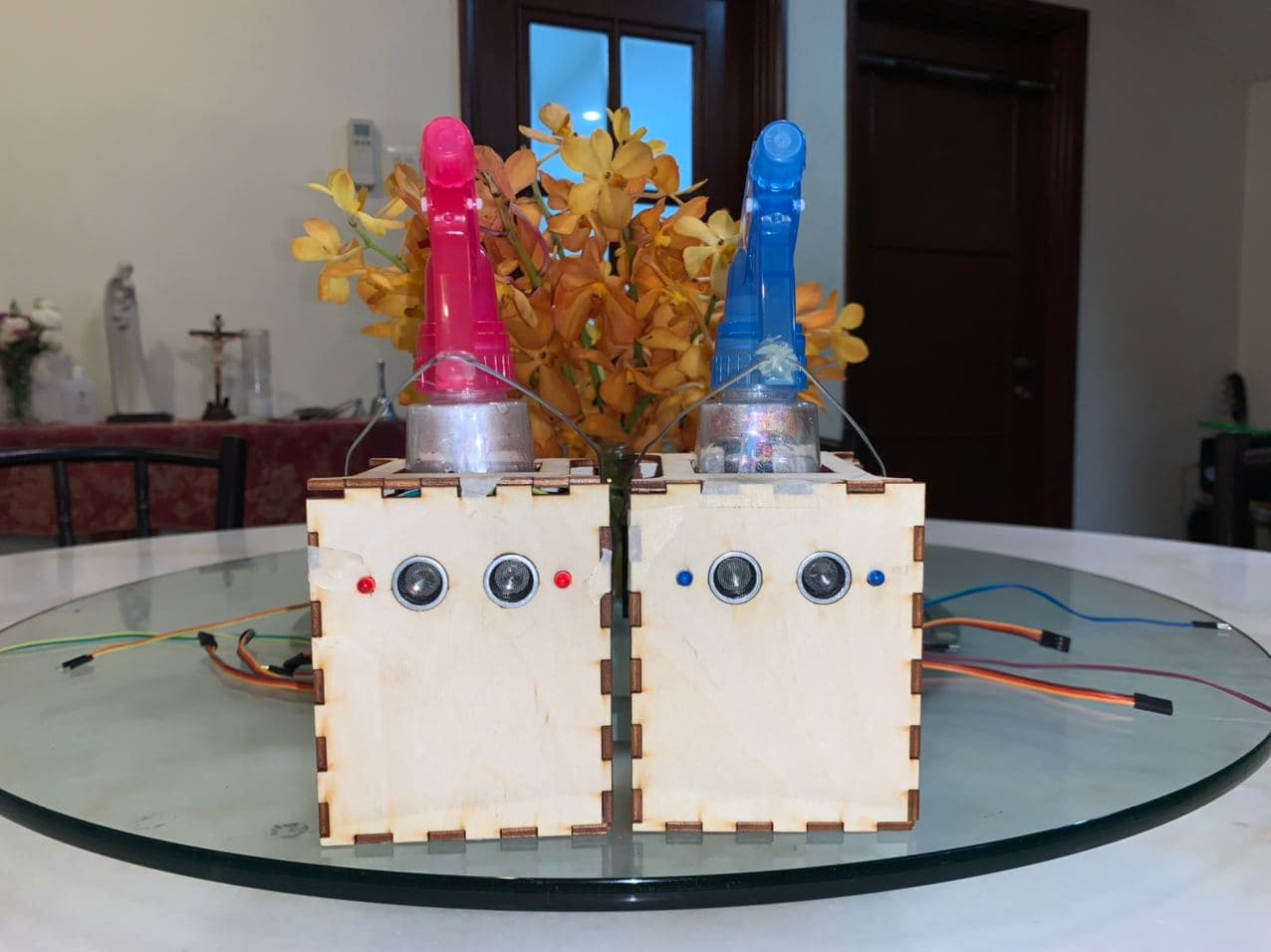 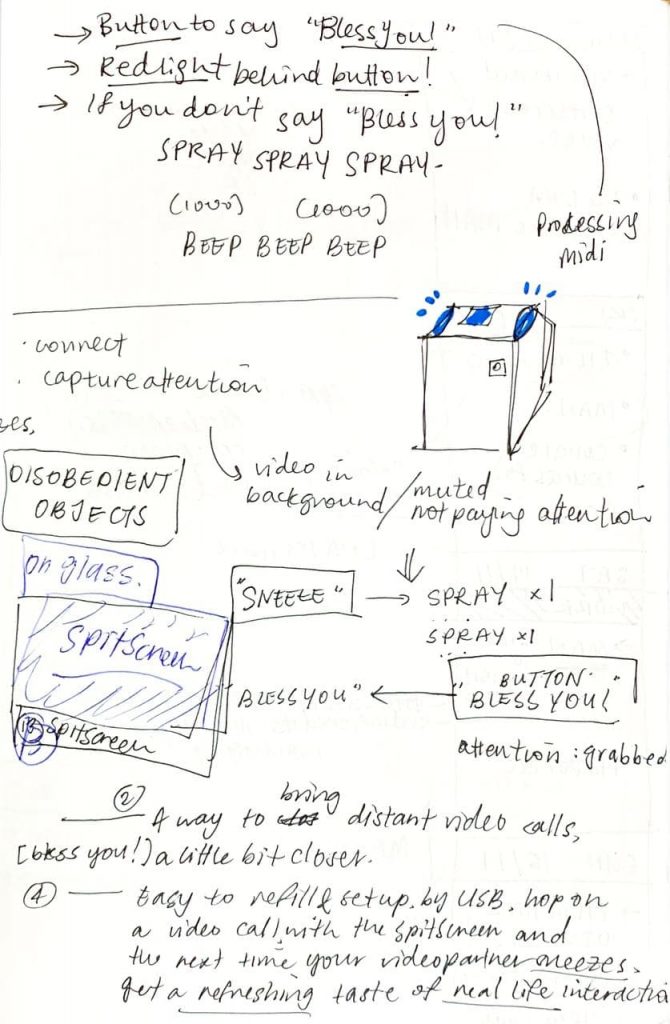 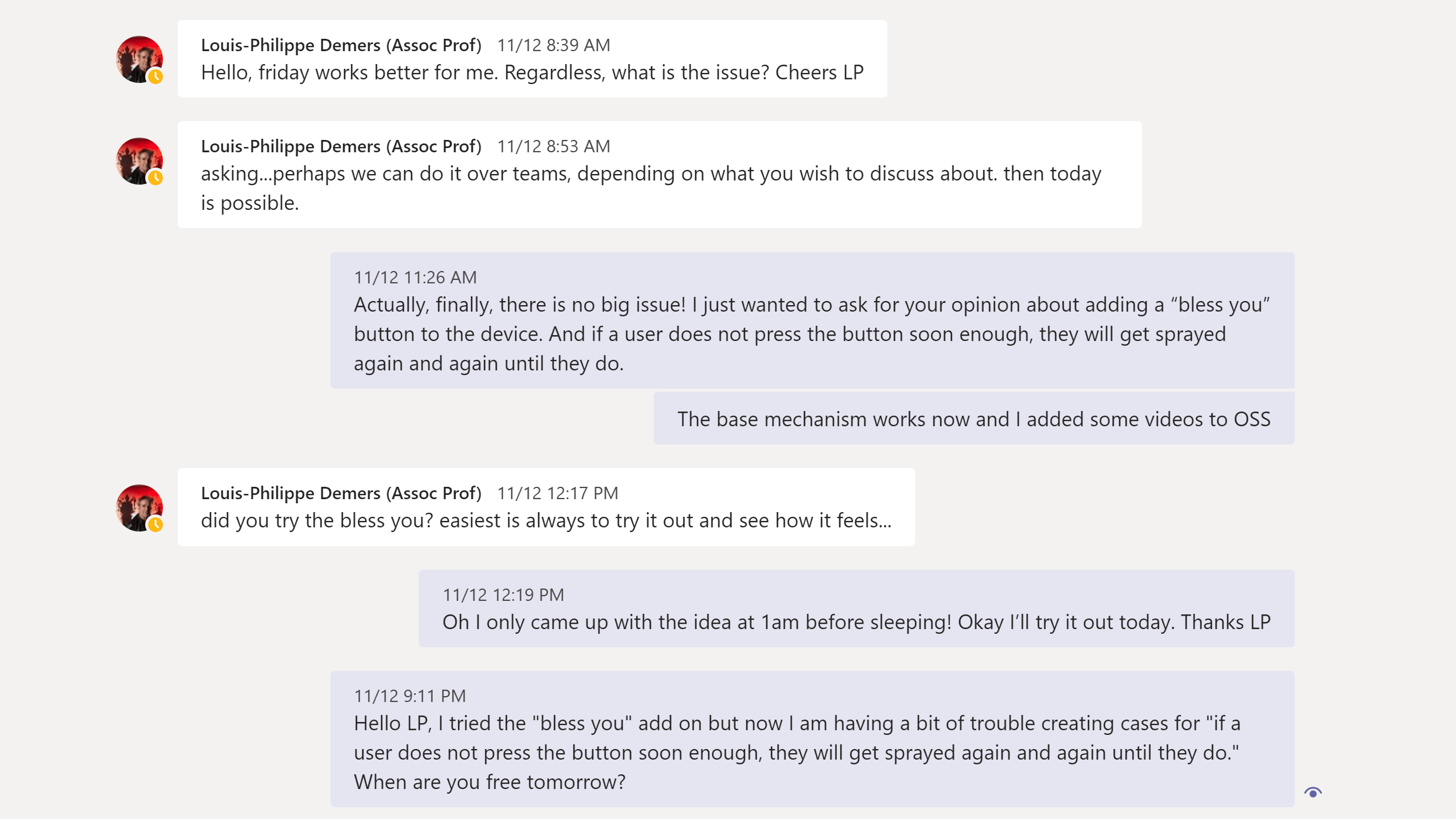 Initially, I set up a tactile switch on the breadboard and was just pinging Processing to play a “Bless you” every time the switch was triggered.

To have a neutral voice, I wanted to use robotic or text-to-speech to kind of emphasize the ridiculousness of having an automated “bless you”.

I was pretty happy with how the audio sounded- it almost seemed like a taunt at me towards the end when I was constantly getting spritzed.

After stabilising the switch, I realised that the box I made was not made with handling and holding in mind. This made it evidently non-ergonomic and there was no comfortable place to mount a switch.

I did some soul searching and asking for opinions. Upon letting more people try out the mid-high prototype, I observed that most users’ first instinct was to try to cover the spray with their hands. I thought this would be an interesting gesture to capitalise on and add some sort of sensor to detect hands/covering.

I went with an ultrasonic sensor in the end as I was familiar with it and had a clear idea of how to mount it to the box. A photoresistor would be unreliable and requires calibration depending on the lighting conditions. I have yet to try an IR sensor but it would have been too big and bulky anyway.

I wanted to add some LEDs as well inside the box, with the hope of this causing the whole bottle to glow. Sadly, the glowing was not as dramatic as I hoped so mounted on the box it was.

I managed to fit the ultrasonic sensor 2cm down in the front of the box and wanted to put the LEDs in front as well to create interest. These were my two options. 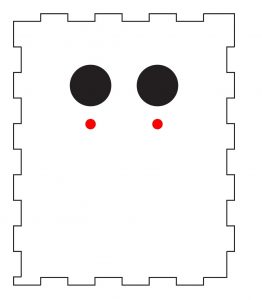 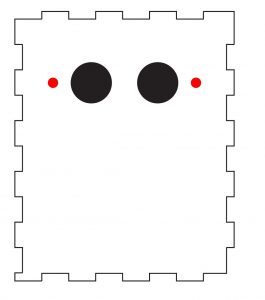 I went with the second as there was more space for internal wiring down the sides and it looked like a blushing creature. 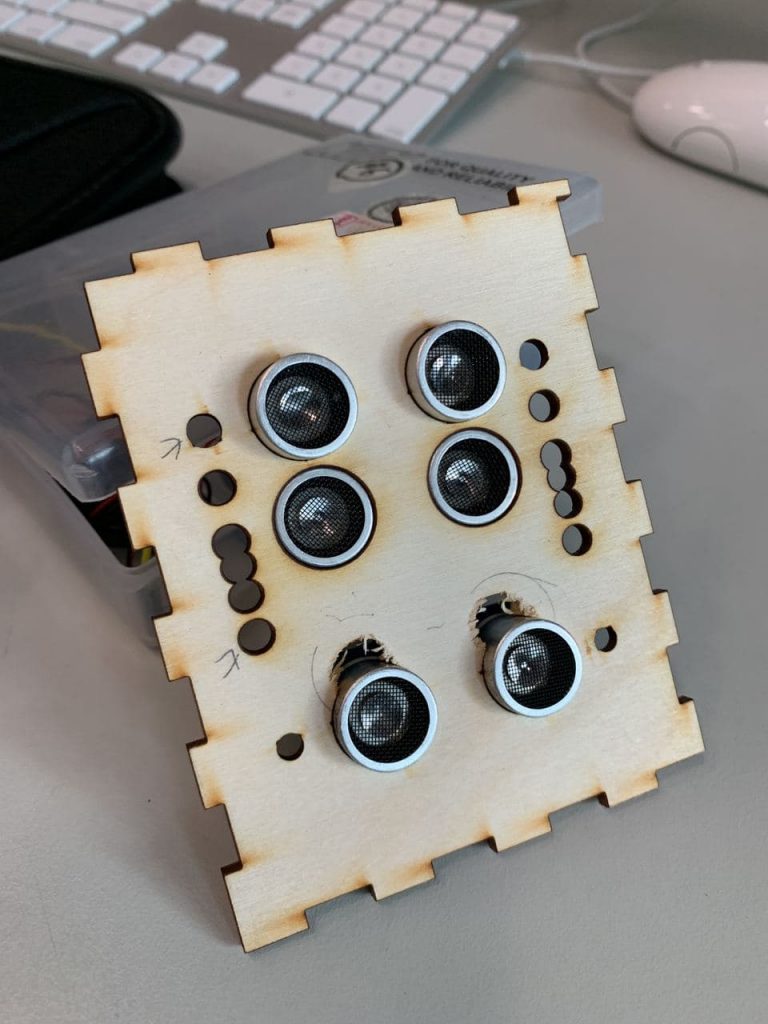 Calibrating the sizes of the holes to the laser kerf of the laser cutter at the VC print store. 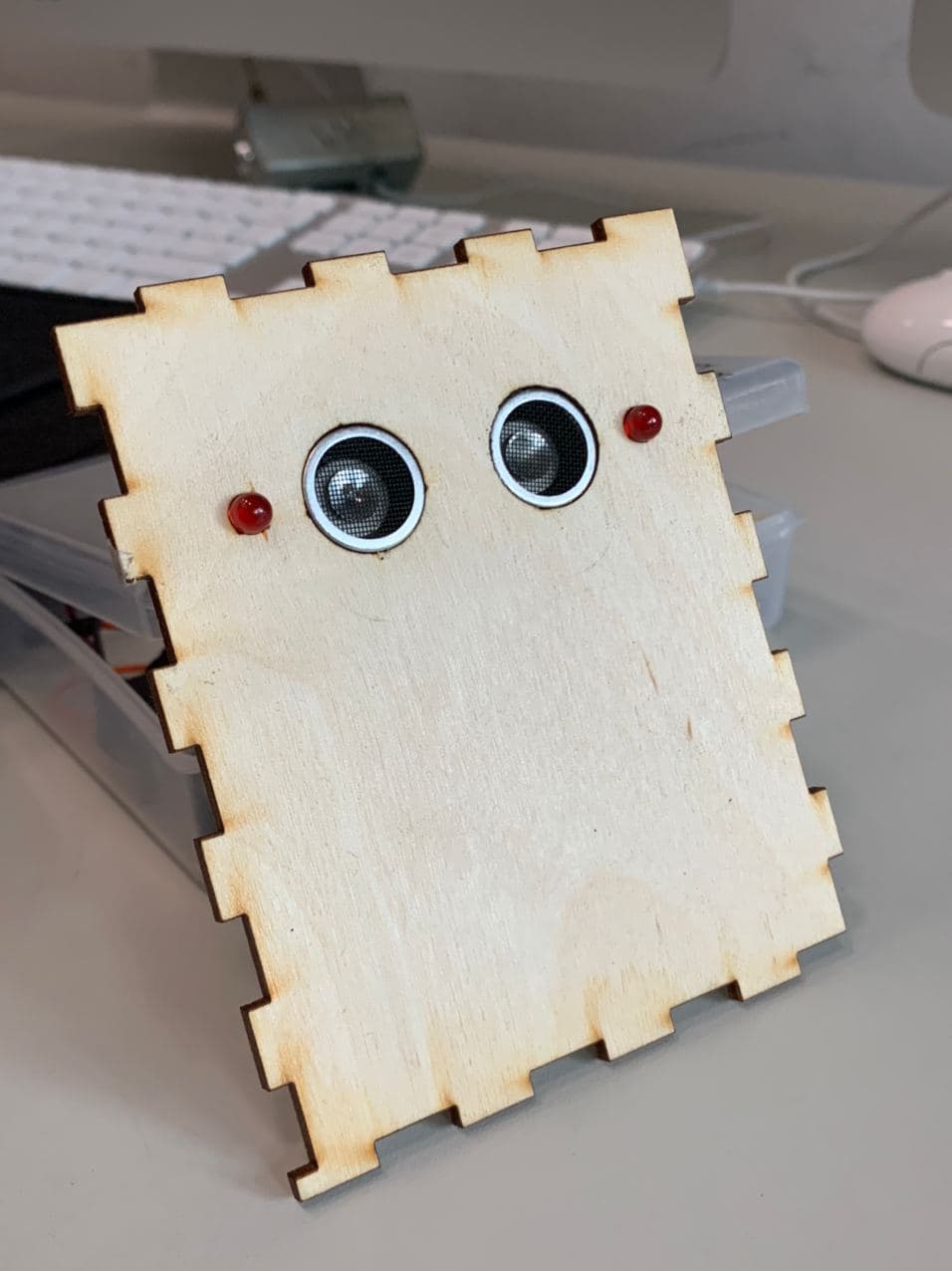 This is a front panel with the components inset. I decided to have the LEDs correspond to the squeeze bottle top- red LED to pink spray, blue LED to blue spray, and green LED to green top. Since I only had enough wood to cut 2 boxes with all the miscuts, and this would make more sense for a 2 person video call.

This is their wedding picture:

Encased circuit into box with wires running out. 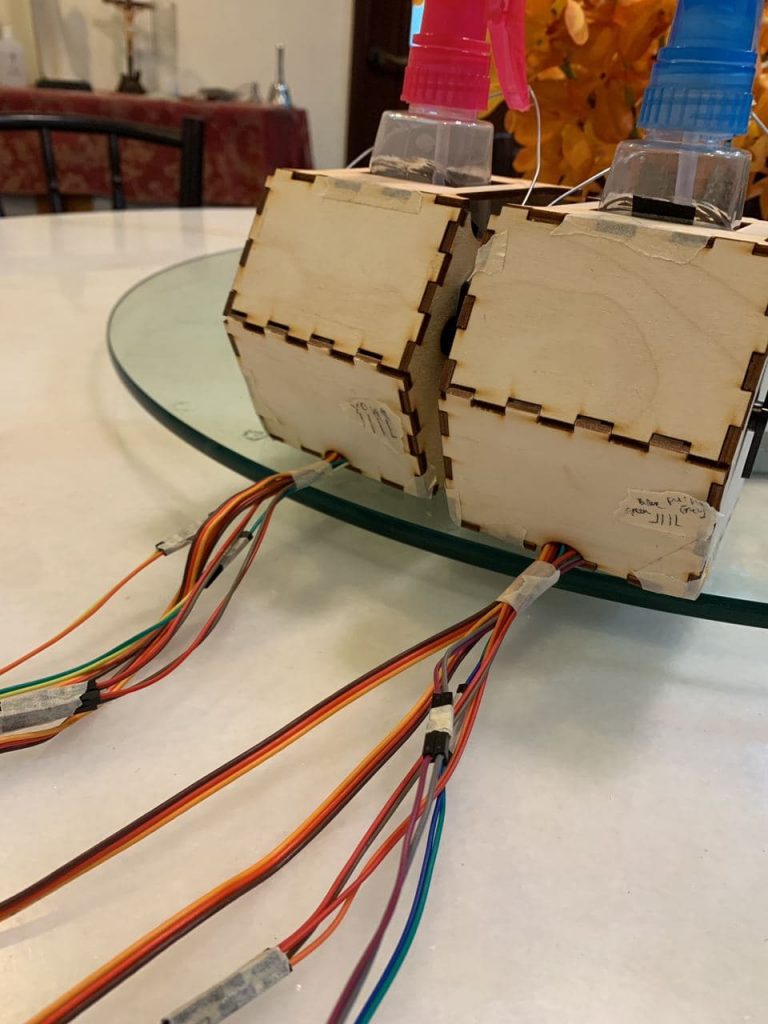 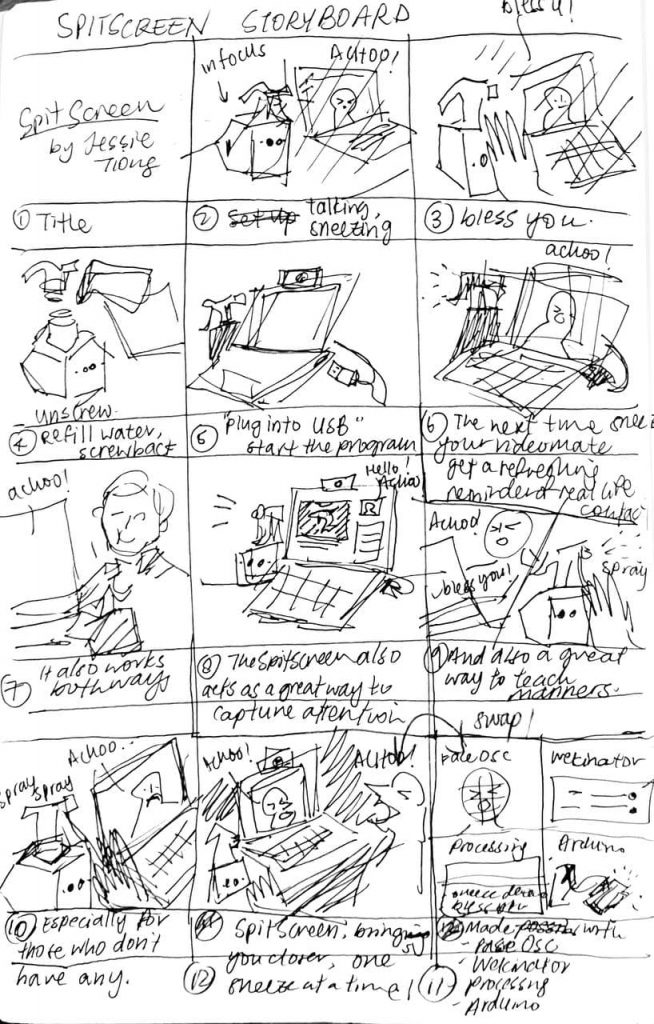 Set up for final presentation:  (I got rid of the mouse and keyboard in the end) 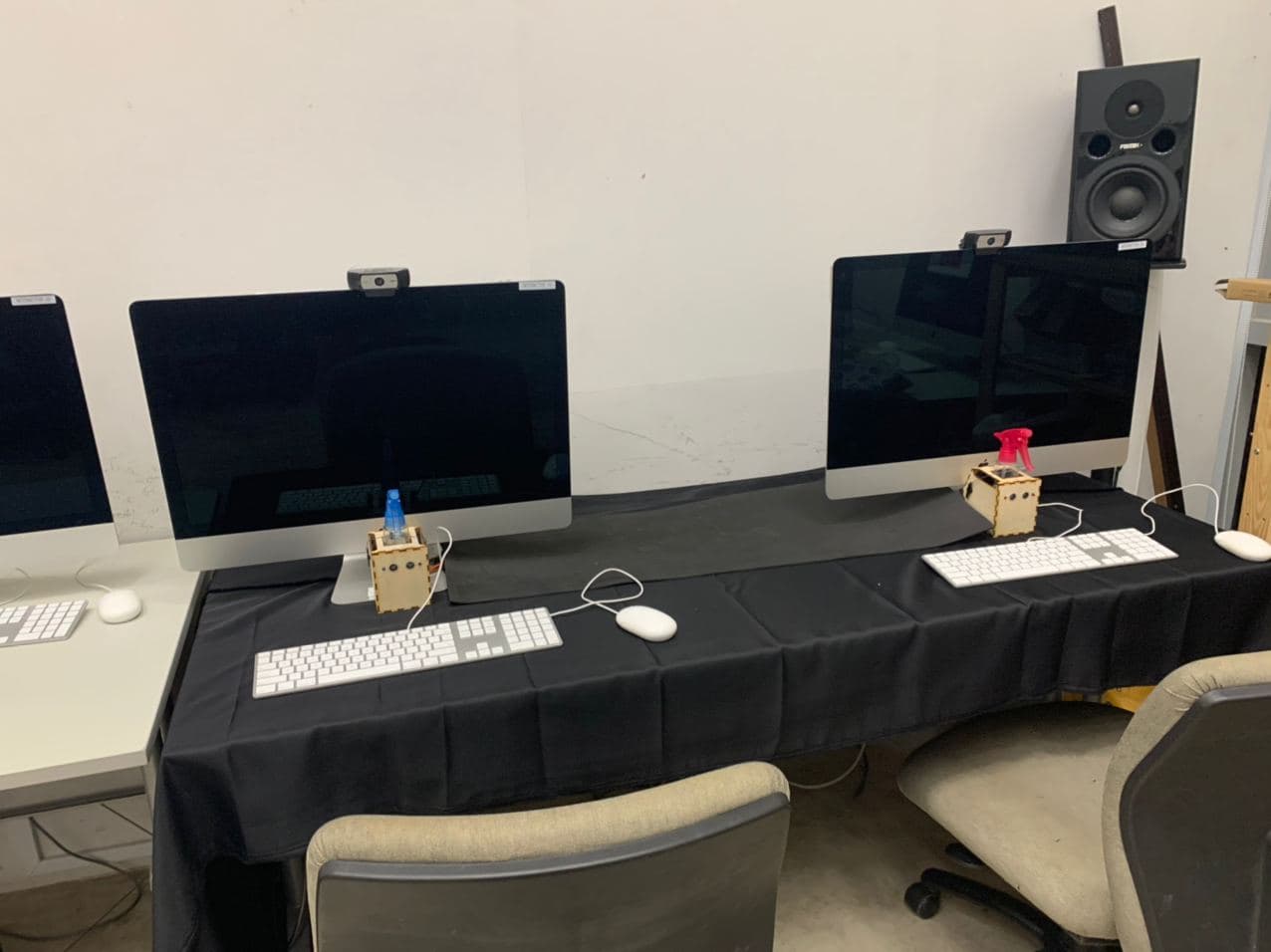 I used add-on webcams as Zoom was giving me errors on not being able to use the built-in FaceTime camera for both Zoom call and FaceOSC.  Update: On showcase day, somehow both programs were able to take video from the same built-in camera. 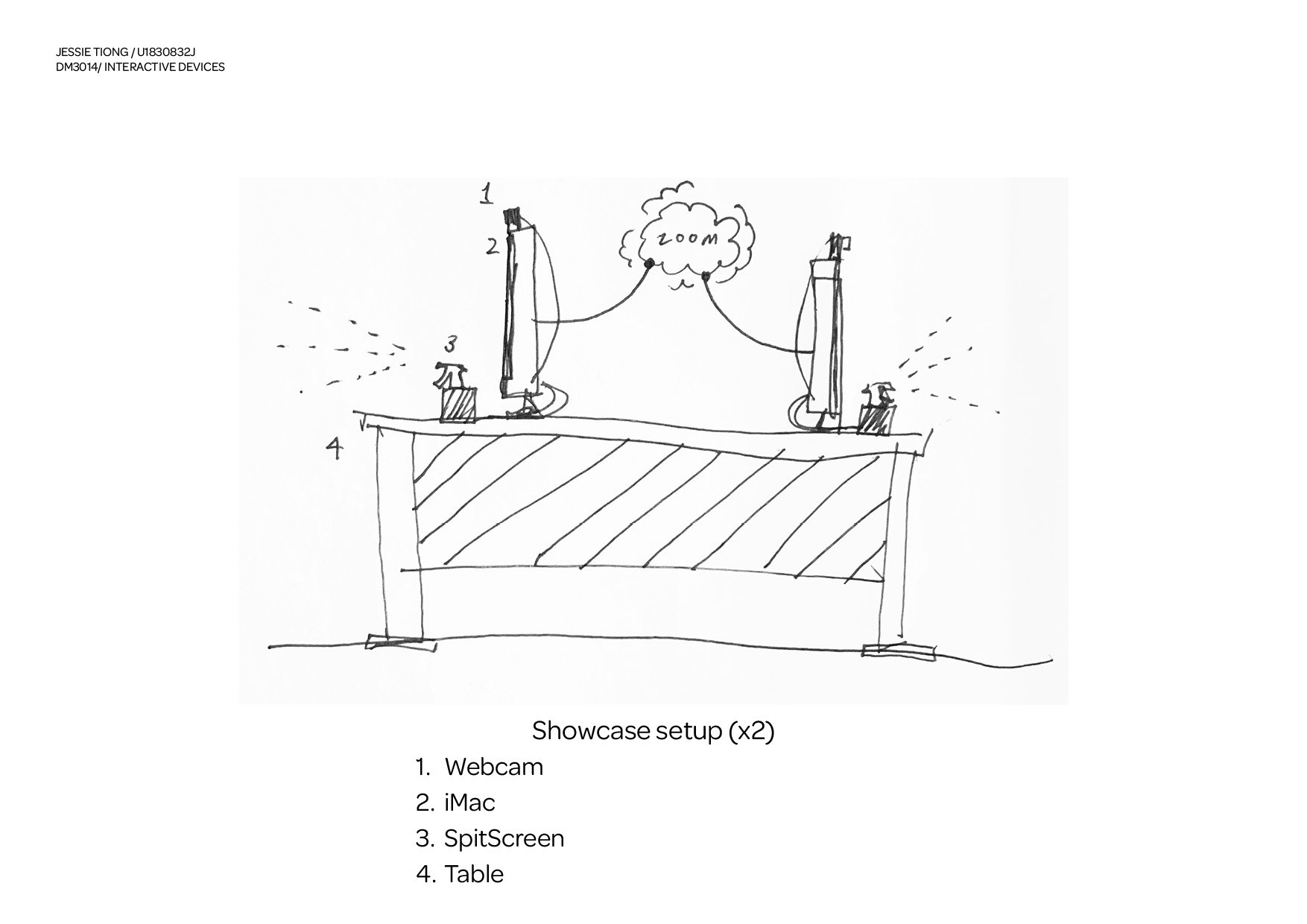 A mockup of a remote video call set in a public and interactive space.

Equipment needed:
iMac (Interactive-18 & Interactive-19) with Wekinator, Processing, FaceOSC installed. One table (similar length to those under the iMacs).