So here’s to continuing my topic of belonging and home.

I’m still keen in playing the role of a flaneur and observe the people in the streets while asking myself the question of why people sometimes just feel as though they do not belong.

From my previous project, these are the reasons that I’ve kept in mind while filming around the city:

Crowded – Urban isolation; being in a sea of people, yet still feeling alone

Abandoned – feeling so insignificant that we might easily be forgotten

Including sound inside my project this time around, I decided to focus on languages and accents to emphasise the idea of division between those we could comprehend and possibly communicate well with versus those who may speak a different tongue. The communication barrier oftentimes serves as the reason why some feel alienated, as being understood by others seems difficult. Sometimes, one’s accent may also catch others off guard, as their accent does not entirely match their appearances. With this, languages and accents indicate one’s background and identity that goes beyond surface level. Oftentimes, we can indicate whether one is Chinese or Filipino or American through their accents or the languages they speak.

Hence, in this project, I aim to show the explore the reasons why people do not belong by incorporating this sound aspect into my video as well.

I watched Hatoum’s video art a few years ago and having analysed the piece, I really grew to love her video and especially Mona Hatoum, herself. I am very much fascinated by the layers that are evident in this video, which are the arabic writings in the foreground and stills of her or her mother in the background. Layers are also found in the video’s sound, as Hatoum incorporates a conversation with her mother in their native language and her own voiceover in English. The intimacy that is evident in this video art is compelling to me. The message of the video seems mysterious, especially for those who cannot understand what she and her mother are saying, and as we slowly discover that it is a body that we are looking at.

Having watched La Jetee again in class, I decided to search for more of Chris Marker’s works for inspiration. I found Le Joli Mai, the video below. I really liked his city scenes and how he captures the emotions of the people he would see in the streets. The black and white in his video creates a mood of dullness, thus emphasising on the saddened emotions of the people, which contradicts the peacefulness of the city.

From Marker, I found Davidson’s video and was really amused with the way he would take his shots. He would play with composition and angles to display the city in various ways. Moreover, the crispy aspect of the film offers it a sense of rawness, together with his disuse of a tripod that brings forth the idea of a certain instability within the video.

Little India seemed like a good location as it has its quiet nooks, especially behind the shophouses or along the alleyways, yet the place also does get busy from time to time. With this, I was hoping to see how people would react to the busyness and the quietness of the place. I observed that there were people who hide themselves as they wanted to be alone, minding their own business. Others are amongst everyone else but wouldn’t interact with the others and would prefer to stay by themselves, even if a group of people are casually relaxing and joking around nearby. And then there are those busy with their work. These are the people that would wonder why I am taking a video of them but would quickly look away when I fix my eyes on them instead of the camera. There were many unkept buildings there as well, and the place largely appears different from the Singapore that would be advertised to the public.

This place was kind of like the epitome of Singapore – the city (CBD area) that many people, even foreigners, know the country for. I came here to take shots for my first project but decided to take a few videos as well. Here, people were constantly on the going. They would be on their phones, looking for the direction, walking fast. And oftentimes, they would only stop when the traffic light is red. And then I walked a bit more and found cafes nearby, and that is where I would see people who are not on the go. Of course, there were people who were only there for a business meeting, which was the reason, I guess, why I was really happy when I saw a man taking his time at the cafe just to read a book. He chose to do that, despite the possibility of being alone, despite doing something different than everyone else.

I got off of Bugis and decided to take a stroll to Nicoll Highway. It’s not a long journey and I’ve walked this route a few times before, but it took longer this time around, especially as I would deliberately take pauses just to look around and observe people. Yes, I felt like a creep at times but (okay, I’ll probably sound even weirder saying this) it was actually relaxing in a way. I would stop to try to understand if the people were alone by choice or if they were really lonely or just alone. I’d wonder what they’re thinking and why they’re alone. And I’d find quiet areas in the city area. Everywhere else is busy, but I’d take a random turn somewhere and it’s suddenly quiet.

I would ask potential people who seem like they might feel foreign in Singapore about where they think is home. Or what their definition of home is. When I’d see a sense of hesitation or difficulty, I knew I’d want to interview them. 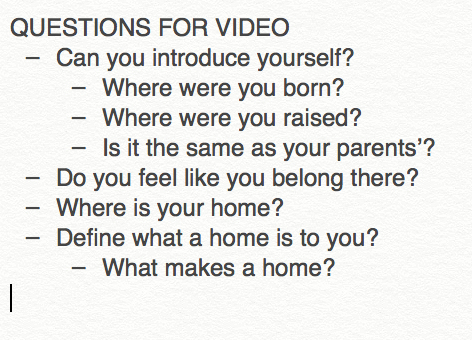 He was born in France but grew up in Canada, moved to a few places there, and eventually moved to Singapore. His parents grew up in France.

She was born in Hong Kong but moved to Singapore when she was younger. Her parents were originally from China but moved to Hong Kong.

Below, we could see how I’ve played with layering videos on top of one another. I’ve always wanted to try something like this in an artistic way ever since I watched Mona Hatoum’s video. My video focuses less on a structured narrative and features layers of scenarios that could hopefully convey different stories.

I really wanted to create a vintage look for my film. Drawing back to my first project, the rawness in a photograph or a film, to me, makes the piece feel more genuine and nostalgic. Through this, I wanted to provoke emotions – make people feel not just through the scenarios or subject matters, but also the overall style of the video. I also added a layer of grain effect to achieve this vintage look. 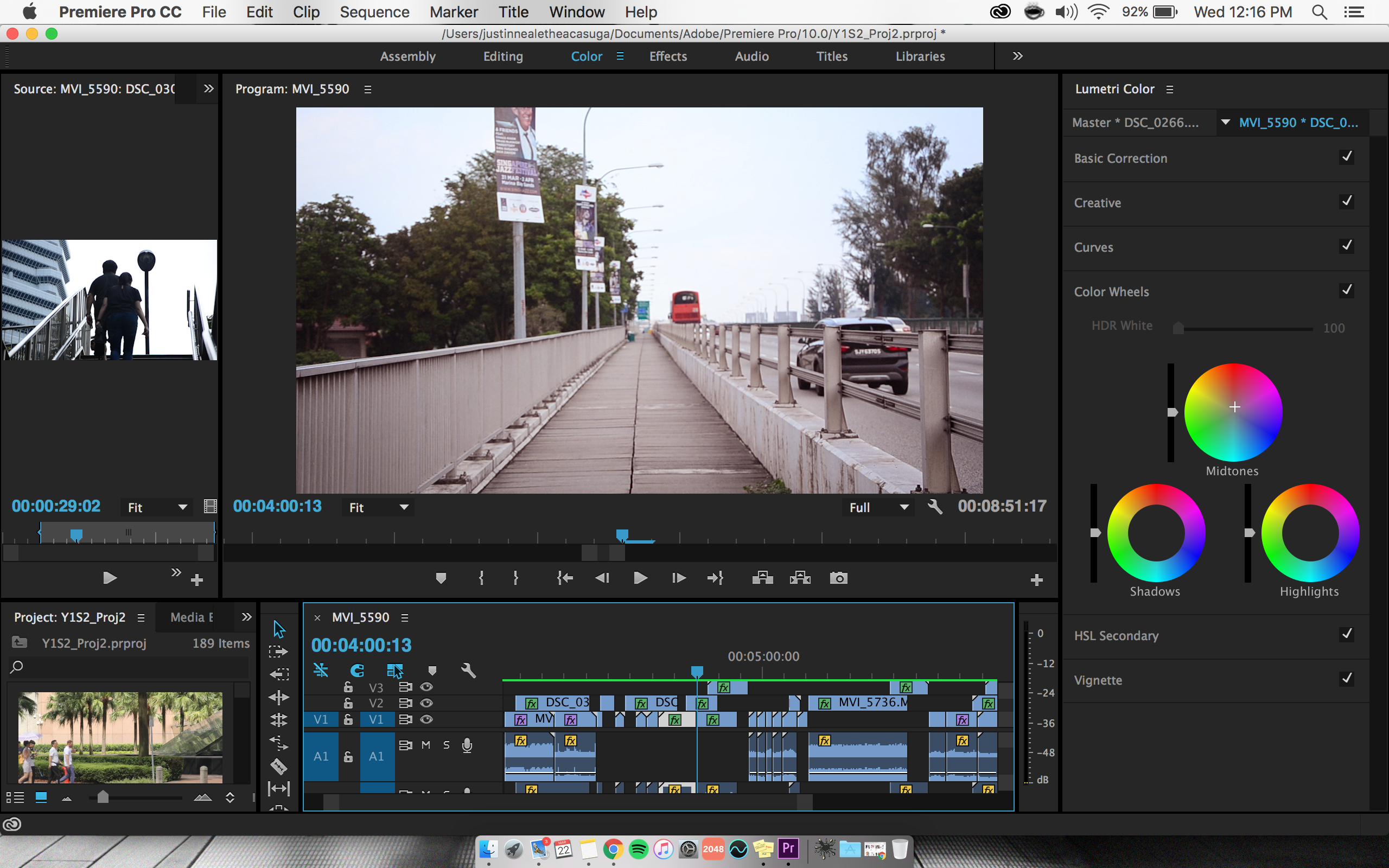 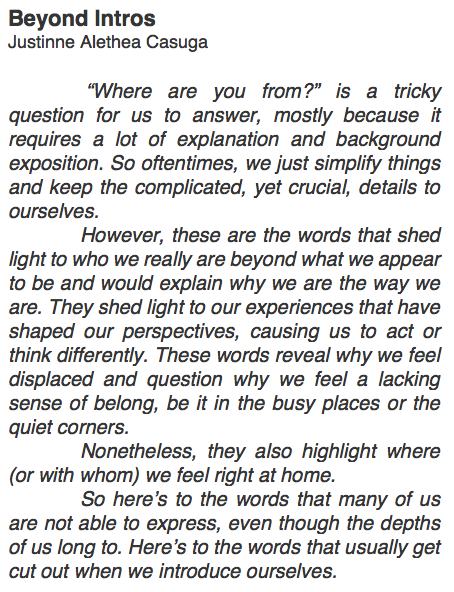 I’m slowly trying to learn how to export videos out of Premiere Pro in high quality. But then I realised that if you want HD videos, you’d also need to have the privilege to upload big files on Vimeo.

After watching my video for a couple more times, my friend told me (which I agree) that the colour doesn’t really pay tribute to the audio being that it may seem a little too distracting. Hence I decided to take out the colours in the film and pursued more vintage looking footages by playing with the fps of a footage (making it 17 fps rather than 24 fps) and increased the opacity of the grain layer.