In this Fifty Shade assignment, I have chosen two of the project that I am going to compare and contrast.

These two projects are chosen mainly because they overlap each other in terms of an artwork in an Art Fair. I will attempt to make a timeline for both project to visualise and understand the process they took for this two projects. Moreover, it makes perfect sense as there will be some parallel events and contrasts between the two projects. In this essay, I will include scope, scheduling, budget, life-cycle, and projects objectives for Art Stage Singapore & The Fragility Of Time. I will also make a mock example where The Fragility of Time will be shown at the Art Stage Singapore.

Before I begin, let me briefly introduce those 2 projects. 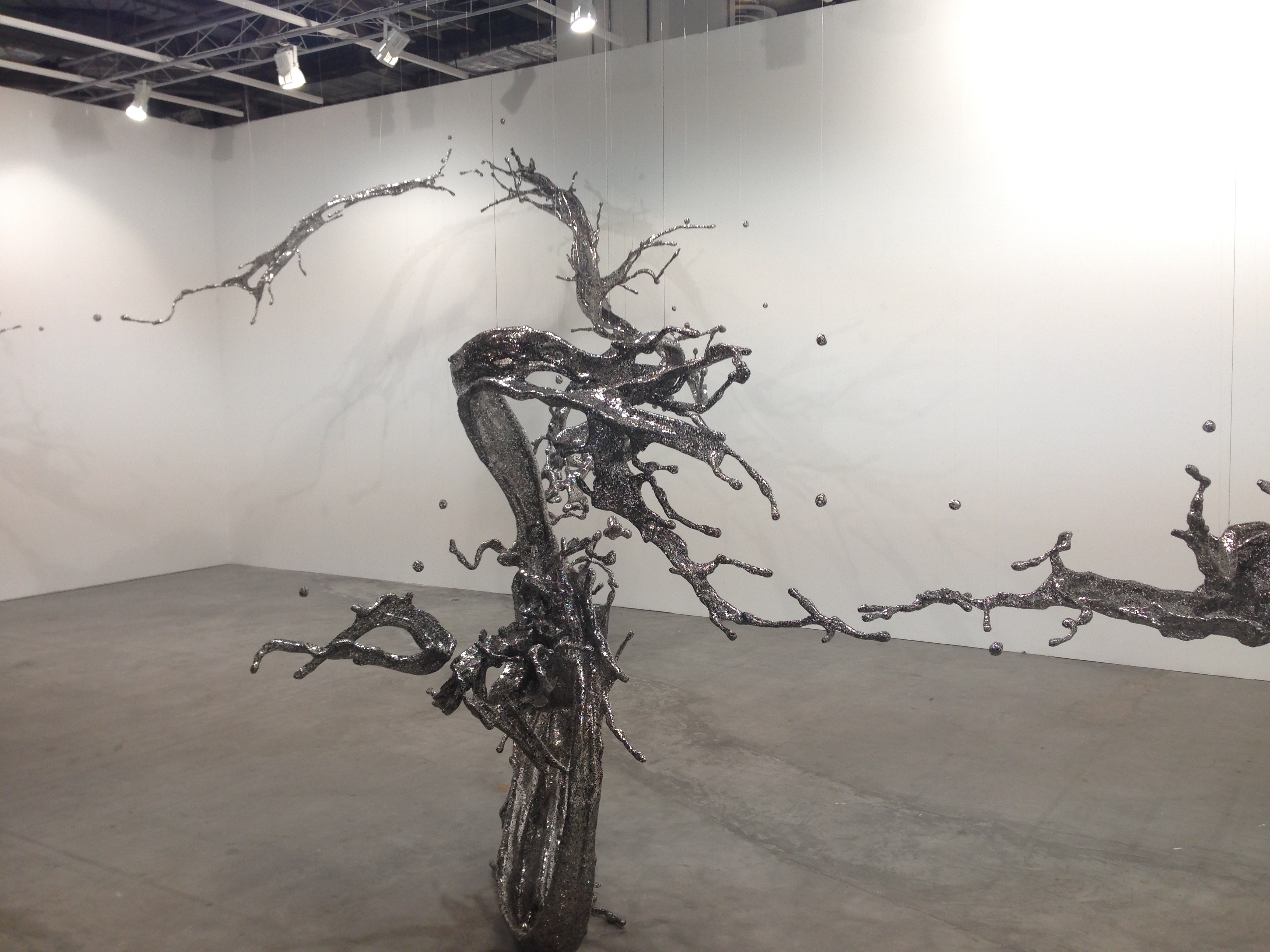 The Fragility Of Time by Ignacio Canales Aracil

Secondly, the artwork titled The Fragility Of Time by Ignacio Canales Aracil. This series of sculptures are made from pressing flowers and plants together to form them. These flowers are collected from private gardens and galleries from different part of the region. So in a way it is a collaboration between the gardens and the artist as well. These flowers are do not use any other material to hold them together except the intricate weaving pattern. It takes about 1 month let the flowers sit and dry before moving it to the gallery to be shown.

As the project manager, Lorenzo will need to determine which team he would need. He would probably need a small team around 10 for example to make everything possible to happen. He would then need more temporary staff to run the day to day errands during the event itself, for example, ushers and crowd controllers and securities. For Ignacio, he run the project as a sole proprietorship. As he is also the artist, he need to wear many hats in the making of this project. 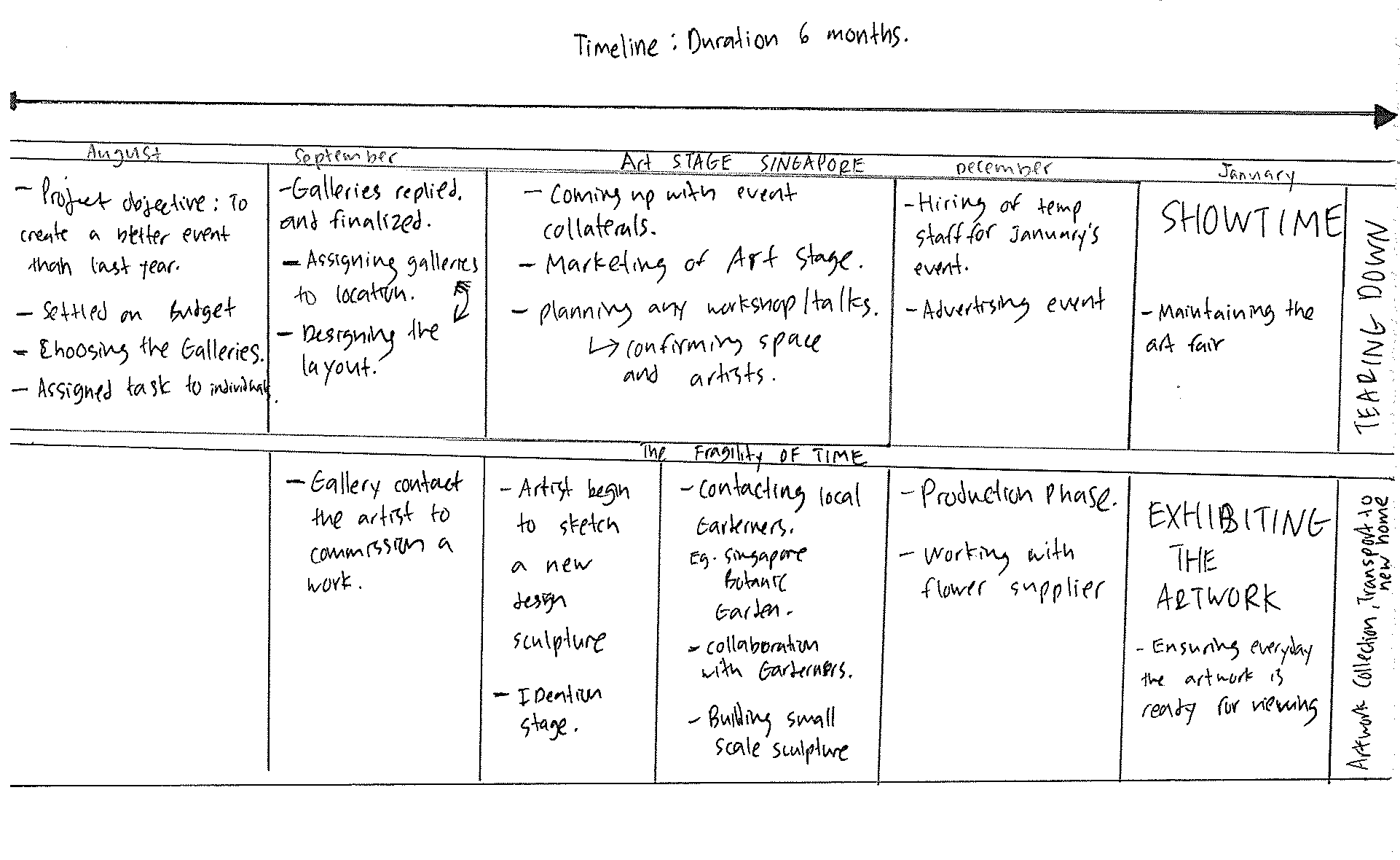 Above attached is a timeline that i have created to compare and contrast the type of management and events that might took place in the 2 projects. Feel free to press on the image to see it in a larger format. In this timeline, I decided to go with 6 months as I make an estimation. However, I am aware that planning of an art fair could take place longer. Given Art Stage have been here since 2010, I assume they have enough experience to reiterate their planning. Again, let’s assume that The Fragility of Time is being exhibited in the Art Stage, hence this way, we are able to see the contrast and parallel events clearly.

Scheduling
In scheduling, Art Stage Singapore took a longer time to plan and execute as it requires a lot of planning and detailing to ensure the event is a successful one. In this case, I give 5-6 months before the Art Stage takes place in January. This including handpicking of galleries to exhibit in Art Stage. As Art Stage depends on the galleries to do all the work in a sense, picking and liaising with the art galleries is the most important task in my opinion. From the date of the first planning, the scheduling will take the course over 6 months till the end of Art Stage Singapore. However, I feel there will be an amount of time used for the need for closure, those closing the deal kind of thing.

For Ignacio, his scheduling period starts when he is chosen as one of the artist to represent the gallery in Art Stage Singapore. As as Spanish artist, he needs to consider the time differences to communicate with his contacts over in Singapore. Right after he come up with a new design for his sculpture, he would need to find his flowers and since he always uses the exhibiting country’s flowers, I assume he would need to contact the Singapore Botanical Garden to supply him with the flowers. This collaboration with SBG and Ignacio may take a longer time to plan. If Ignacio have no trouble coming down to Singapore 2 months before the exhibition, then the whole process will be a smooth one. His sculpture need a month to dry and production phase would probably take place somewhere in early December. His scheduling for this project will end when the Art Stage Singapore event is over.

As you can see, there are parallel activity especially during the exhibition period. Both projects takes a few months to plan and finish and this is clearly shown in my drawing above. Scheduling is also the same as the life-cycle of this 2 projects as shown in the drawing as well.

Budget
As Art Stage Singapore gets the bulk of their profit by getting an amount of percentage of the galleries sale, their budget of the event should probably be a higher value. Running an event as large as Art Stage Singapore, takes a lot of funds and moreover, they have sponsors and partners. Singapore Airlines, Marina Bay Sands Singapore, National Art Council, National Heritage Board and Le Free Port are just some of their Official Partners! Furthermore, as the government are pushing Singapore to be an art hub in the region, getting the budget is not really an issue, like how we have seen the case of Sonoport.

On the other hand, Ignacio and his flowers might not be getting the VIP treatment as Art Stage though. In this case, the gallery that is representing Ignacio might have some funds for him to use for his production. From my experience, artist is able to write in to their country’s art council to ask for some money if they were to represent the country for an art exhibit overseas. So Ignacio could also do this to get more budget. Ignacio also have to prepare some budget for his stay in Singapore as well.

Looking at both different projects, both projects should have no trouble getting the budget that they need. Budget is very important as they will determine the quality of work being done and also the scale of it. 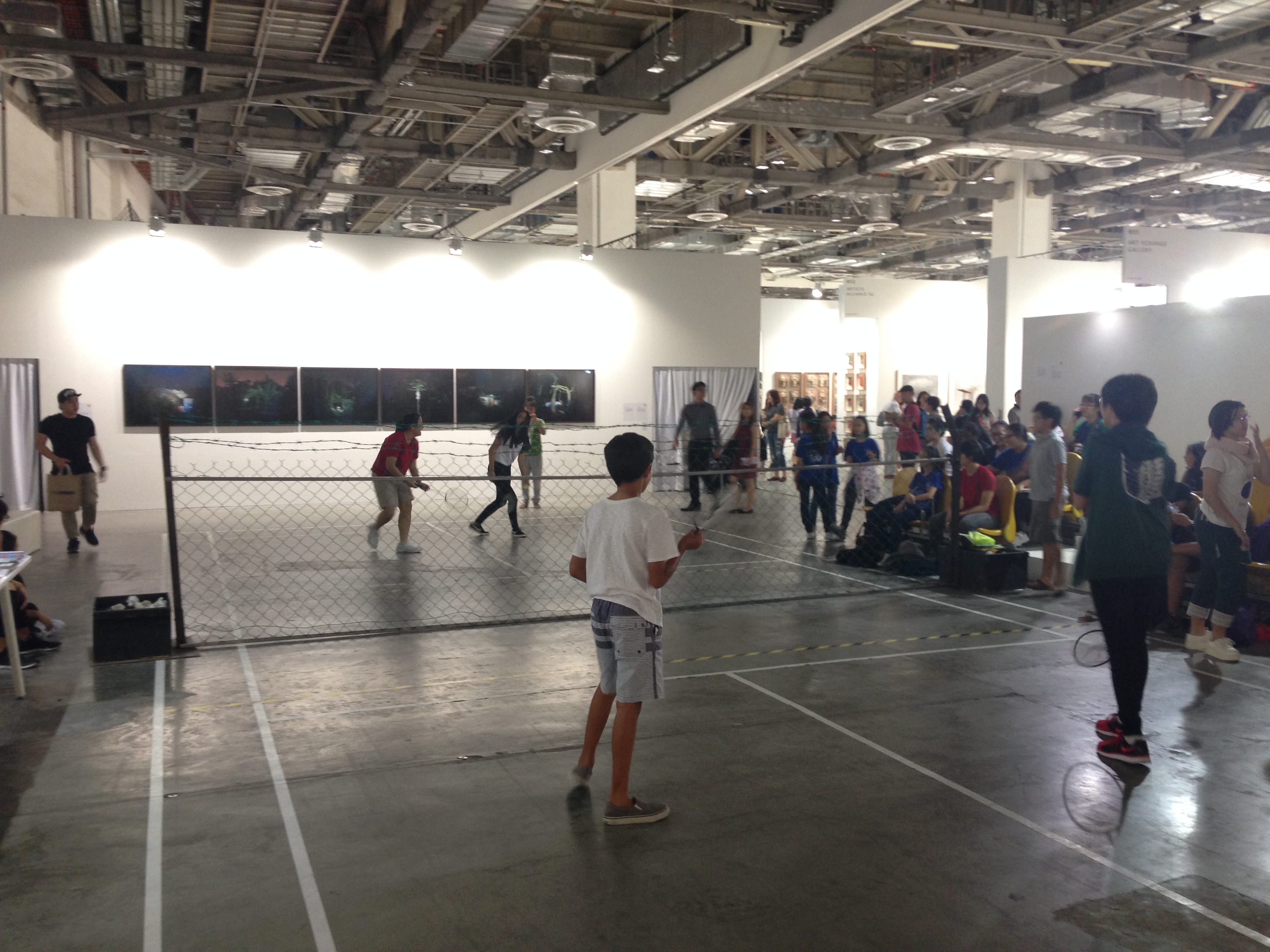 Taken by me at Art Stage Singapore 2016 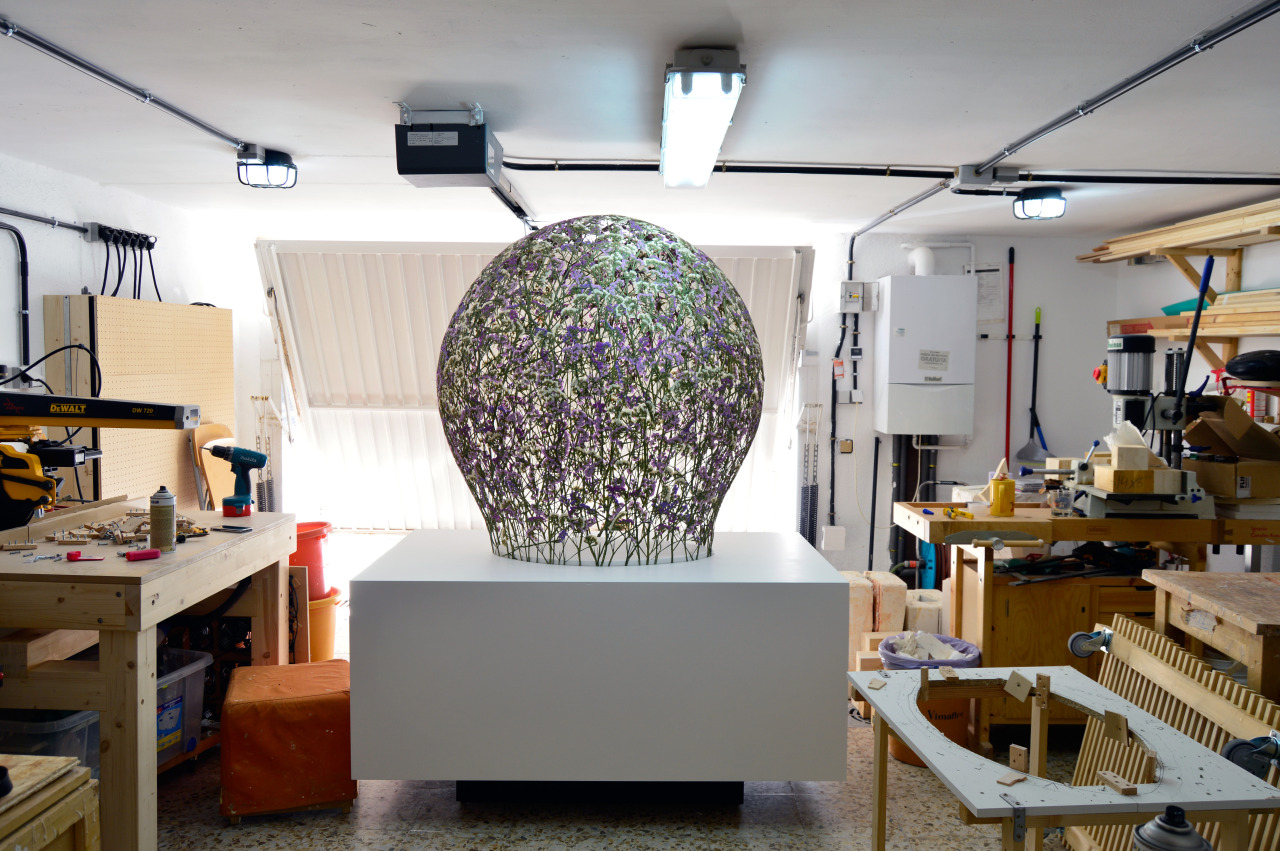 In Summary, the 2 projects are of different scale and size, however, the similarities is they as artists, Lorenzo and Ignacio wants the best for their portfolios. Making an artwork or staging an art fair required a special kind of taste and by contrasting these 2 projects, we are able to see the different steps being taken. The life of an artwork starts when the process of making it begins but the Art Stage Singapore, the happenings begin on the first day of the event till the last visitor exit the Marina Bay Sands Convention Centre. In terms of project management, there is also some contrast especially having a team running the event and working solo as I have pointed out above.

ArtStage Singapore is an inaugural art fair in Singapore, at the Marina Bay Sands convention centre. A lot of art galleries from around the world come together under one roof to showcase their collection. This major art fair has been one of the important Art fair in South East Asia. It’ll be interesting to see the planning in this project.