Task 1: Object and representation of self

WELCOME TO TOTORO WORLD! I like watching Totoro movie. The fantasy aspect in daily life drawed me to watching it. The innocence in it brought me back to my childhood when i believed my teddy bear came alive at night because it would always be under my bed next morning.  I like Totoro when he is excited! 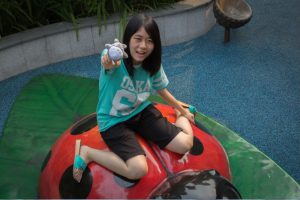 I reenacted that scene where Totoro ride on his catbus. This time round it’s me riding a ladybug bringing it on an adventure. I tried to fly it around. Miss Ruyi’s advice on this photograph is to remove the stoneseat at the back because its distracting and reduce the amount of blue space.  This would place focus more on me, ladybug, totoro and the message i want to carry across. 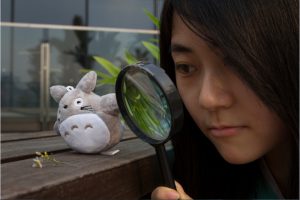 Totoro and i are out on an adventure investigating a new plant life that had dropped down on earth :O Its big eyes show a curious look eager to learn new things like me. I like the implied line going from me, magnifying glass, totoro and the plant. The closeness from me to the object being scrutinized show my eagerness to study it. The background are too urbanized as Miss Ruyi pointed out doesn’t show fantasy. I feel the same too and tried to play around other spot with huge bush behind to take the same pose with perspective.  However i could not get it the same as this so i choose this instead. 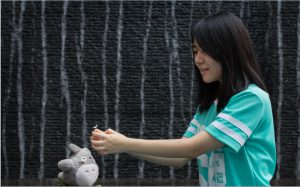 A flower from me to Totoro. An act of love. It is a gift from my ex and he almost met with a crisis to get me it. Thus this shoot i wanted to express love and devotion. Proposing to it represent the commitment and the love he went through.

The absence of my ex make me misses him. I choose silhouette against slightly dark cloudy skies to show the absence of both of us and sadness.

The place where i cleanse myself, relax my soul and become intimate with myself physically and mentally. I have also thought of lots of idea in there. It is where my creative juices flow.

The feeling i want to give to this photo is peaceful. I applied flat lighting. By narrowing the tonal value, it have a tranquil feel. I also include the other basin to have a sense of space and balance.

Lotus represent enlightenment and purity. There’s how i feel with i’m in the toilet. I have lots of ideas as i bath. The eureka moment feel like i on the path of enlightenment obtaining a new piece of knowledge each time. 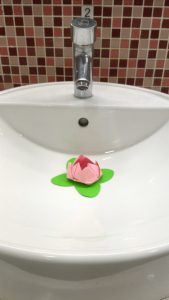 Imagination fly in the the toilet. I played with the colour symbolism. Pink-sweet & playful.

The thing i realised how to make an origami fish look alive is to work around with perspective and angle. I also like how the fishes seem to be looking at the same vanishing point. As if they came out from toilet and move with a mission probably going to the next toilet bowl. The slight blurry look created a surreal look to the photo. 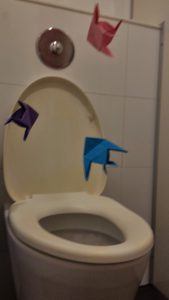 Into a porter of unknown. Mysterious feel with a welcoming glow that draws people in from the mundane gloomy reality. 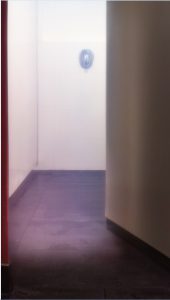 Take away from today’s sharing

I like how some classmates like Shiau Yu have a constant colour composition throughout the series of task 1. There is a link and make it look like there a lots of thought process behind the photo. She came across as a confident photographer and storyteller with the use of minimalism to convey her message. I would try to explore more on the surounding lighting and keep things simple next time:)

My favourite photo is the fish jump out of toilet bowl. I want to play with more filter to get various dreamy effect 😀

It play with our eyes. 1 point perspective directs our attention to the vanishing point. 2 point is normally use for the corner of a building. It make them look bigger. 3 point play with the angles of the shot to make the building/ objects more interesting with a dramatic feel.  More than 3 point is too hard for our eyes to handle. We get confused.

Synopsis: Living in a world of daydreams and confuse about reality. She struggles to keep up with the fast paced of society. Feeling overwhelm with everything and wishing to stay in her bed forever. The girl with clouds in her head meet Orlando, the Ta-Q-Bin delivery man with the worst luck in the world. Every day of his life is a crisis yet he faces it with a bright smile. As she try to escape from reality, she unknowingly get embroil into the chaos brought by him…

Today we learn about visual literacy.

Semiotics is the study of signs and symbols as elements of communicative behavior. Elements include signifier and signified.

Signifier is the meaning associates with the sign refer to. Different culture have different interpretation to a sign. Knowing your audience is important to get the message across. Today lesson remind me of conceptual photography. It is photograph that illustrate idea using signs. Here’s an example (below).

Take a guess on what is this about 😉

Research into what is Mark Making?

Mark making is a term used to to describe the different lines, patterns, and textures we create in an artwork.

It applies to any materials we use on any surfaces. A dot made with a pencil, a line created with a pen, a swirl painted with a brush, these are all types of mark making.

Mark making can be loose and gestural, or structured and controlled. Scribbles, splatters and throwing techniques, mobilize every thing u can find in your house like scrub brush, forks, coat it in paint and try it out!

His paintings of large-scale, freely-scribbled, calligraphic and graffiti-like works on solid fields of mostly gray, tan, or off-white colors.

For this work, Twombly’s composition has taken inspiration and form from ideas of handwriting or mark-making.

It is the largest of a group of grey-ground works he created evoking blackboards covered in chalk writing.His continuous loops and scrawls were inspired, in part, by handwriting drills, Twombly’s repetitive, rhythmic drawing does not create specific words.

The painted background creates a luminous glow suggesting a potentially enlightened state of mind and being, as the artist – and by extension humanity – frantically, and perhaps futilely, summons the “logos” or word, making marks to name things and trying to understand them

Her works of graphic drawings and paintings in ink and watercolours are beautiful and have a zenlike quality about them. Her confidence in using minimal lines and washes to protray a dyanmic and expressive work is something i want to try out.