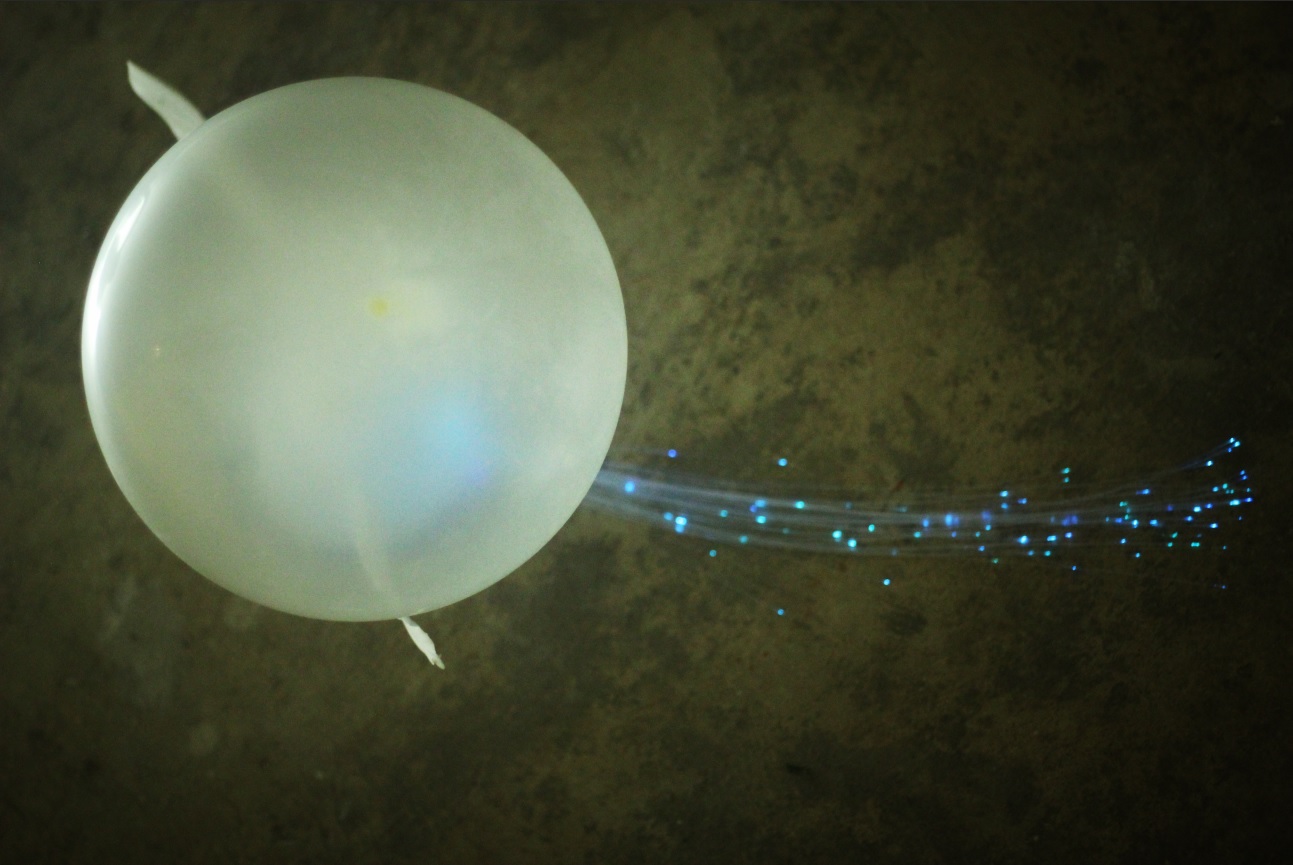 Our installation will be held in the dark. The overall theme is mostly white with a speck of colours to give off a light playful feel underwater. 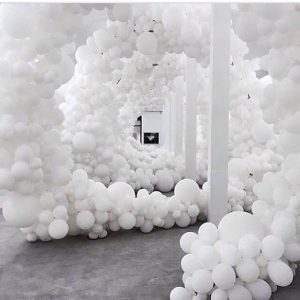 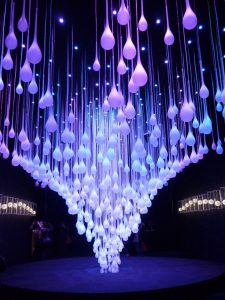 First, The motor is stuck to the foam base and wired up to the battery and switch. All these are covered by a cup. A white led protruded into the balloon and everything is taped together before testing out. 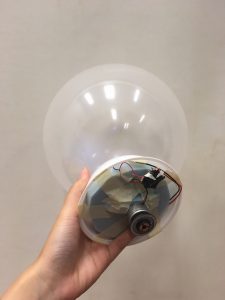 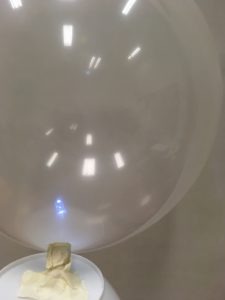 It quite therapeutic for me to stare at this spinning continuously. Its like a solo waltz.

This is how it moves without the cup and foam. Its a lot lighter so it wiggly randomly like a sea anemone. 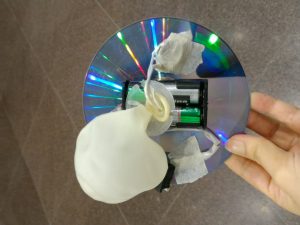 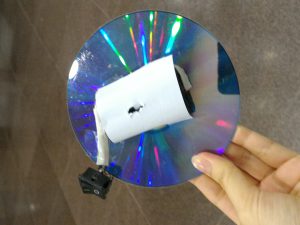 After figuring out the way to make it move like a sea anemone, we moved on to package it prettily by covering exposed wires with white tape and batteries with paper. We used a party stem to tie the balloon to it and inserted it between the batteries. Natasya thought of a way to connect the white led to the bottom of the battery. She extended the battery wire by connecting it with longer wire then she tied the balloon’s end with rubber band. The whole thing is inserted the conical stem. It worked well. 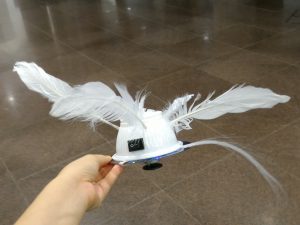 We also tried using a smaller conical bowl n see how the robot moved. Its very unpredictable. It rotated on the spot, sometimes wobbles away. It achieved our main goal of making the robot move away when touches just like how sea anemone escape from starfish. I added the feather elements on the robot as we are inspired by feather starfish. It tickles people feet as they pass by hehe. The tail at the end is fibre optic. We realised that it give a dimmer light, which is more suitable than the harsh white light. Hence we replaced the white light. The dimmer light produce beautiful sparkles in the dark and it look like the tiny robots are dancing underwater. 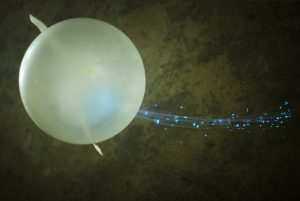 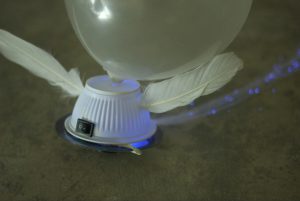 We planned to make 5 robots with varying balloons size and feathers for each robot. As we tested out the more weight the robot has, the less it move. Hence having variation create interesting interaction like some active, one drunk and one lazily spinning on the spot. We even planned to name the robots we make as they are really cute and act differently hahaha! 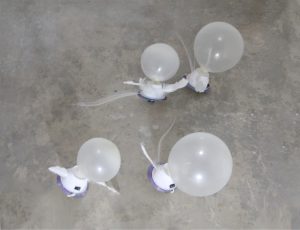 For the scents, we joined everything together in this manner. This is a draft version. 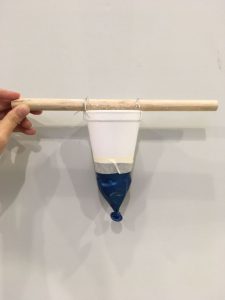 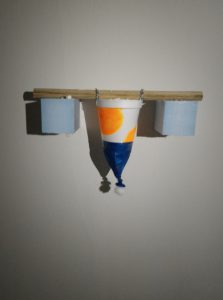 This is how our final looks like. I painted the cups in glow in the dark orange paint in spots to make it look like nemo. I tried charging it in the sun for days but it didn’t work. Hence we decided to use black light and shine on it. It glows instantly! Black light is so magically <3 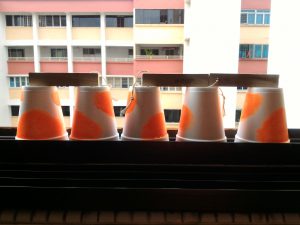 These luminous cups represent the light-detecting eyes which glows as the environment become darker. It also serves as an attraction to trick preys into thinking our avatar as a fish. There’s a tiny stinging bub at the end to stimulate how anemone sting and stun prey to capture them. 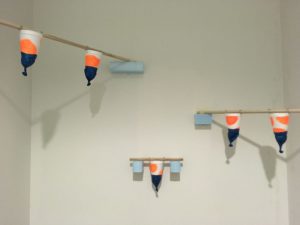 Our avatar’s chemoreceptors are able to detect the faintest scent from prey. The sea contains various scents that pass by our avatar. Only the most distinct scent from its prey will attract it among the other creatures in the sea that appear to have a fainter smell.

Our SO is the middle lemony citrus smell. Amelia made this by combining scent oil with corn starch powder to create the powder. The D smell is the baby powder and the SD is cinnamon. 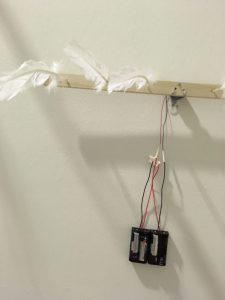 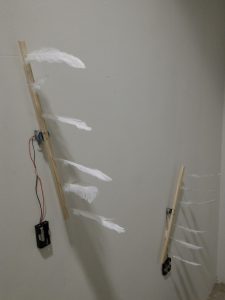 Natasya came up with the feather wall idea. Motor, batteries and more feathers are used in this. Amelia cut the wood and drilled hole  for the feathers to be slot in. As we used one thin and thick wood, we explored which one we should give more power. In the end we decided to have the thicker stick have 4 batteries to make it move faster like the thin stick.

It feels good being tickled by this :3

We installed the feather fan in different heights so the sensory feel contact different part of the user’s body. 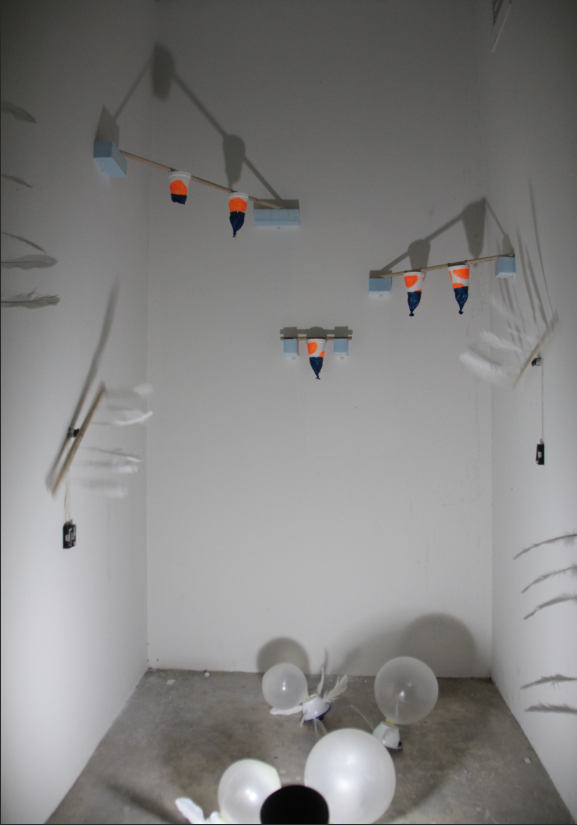 A sneak peek into our installation~