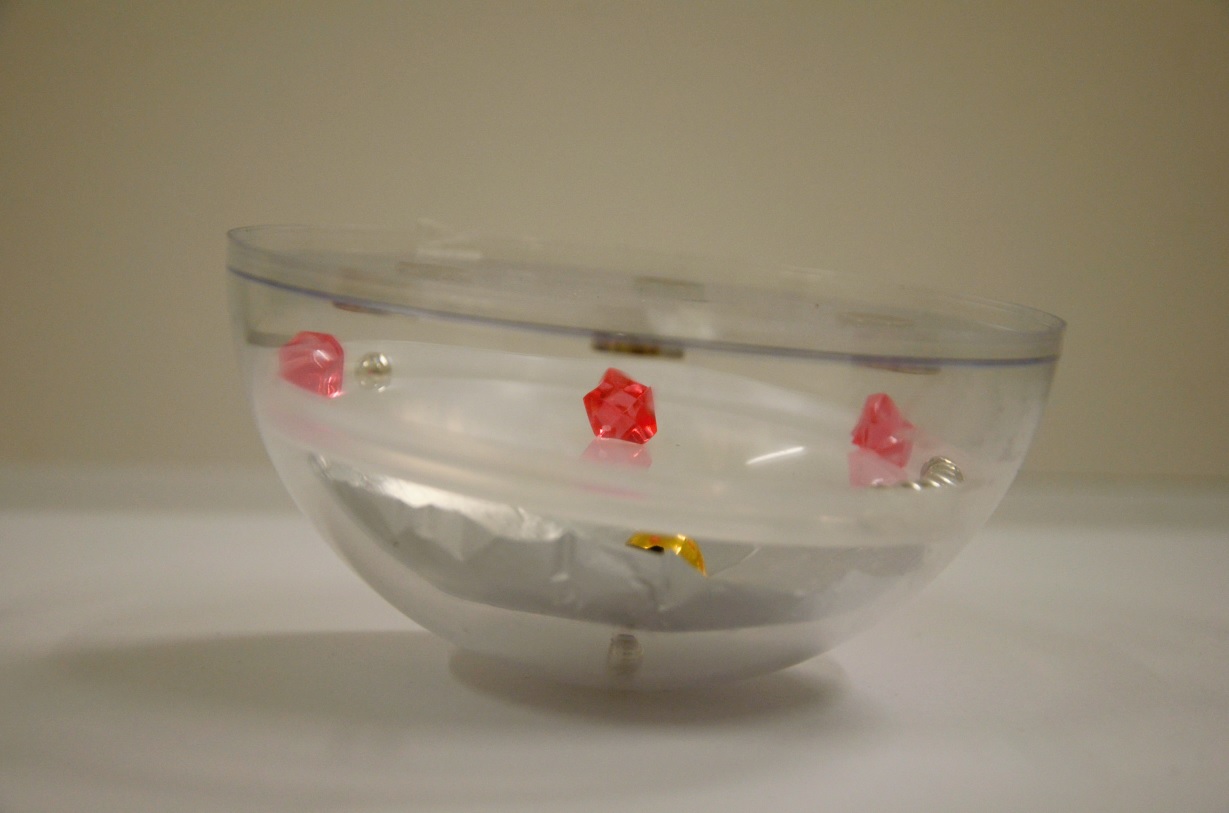 This assignment we are tasked to make a product that produce 3 sound qualities.

I just knew this is my chance to explore magnets. I don’t know how i’m gonna make sound with it but magnets will be my main medium.

This is my initial draft sketch before exploring online. 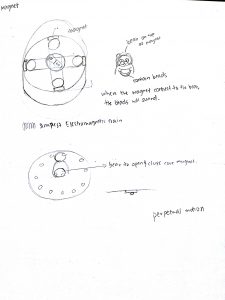 Upon researching, i found this really cool video and that’s where my source of inspiration come about.

I tried making it but failed. I couldn’t make the CD spin continuously and have that “free energy” flowing through it. Mine is like a spoiled old car that spin only a bit then pause. Spin, pause, spin pause. Even when i increased the amount of magnets, it still the same. Probably spin just a bit more only haha.

I explored a lighter material using plastic container lid and bottom. Using the middle one in the photo give a better result. As the container bottom is lighter and has a smooth protruded center, it aids in the spinning, making it turn longer. Although there is still pauses in between, this is the best i could go for. 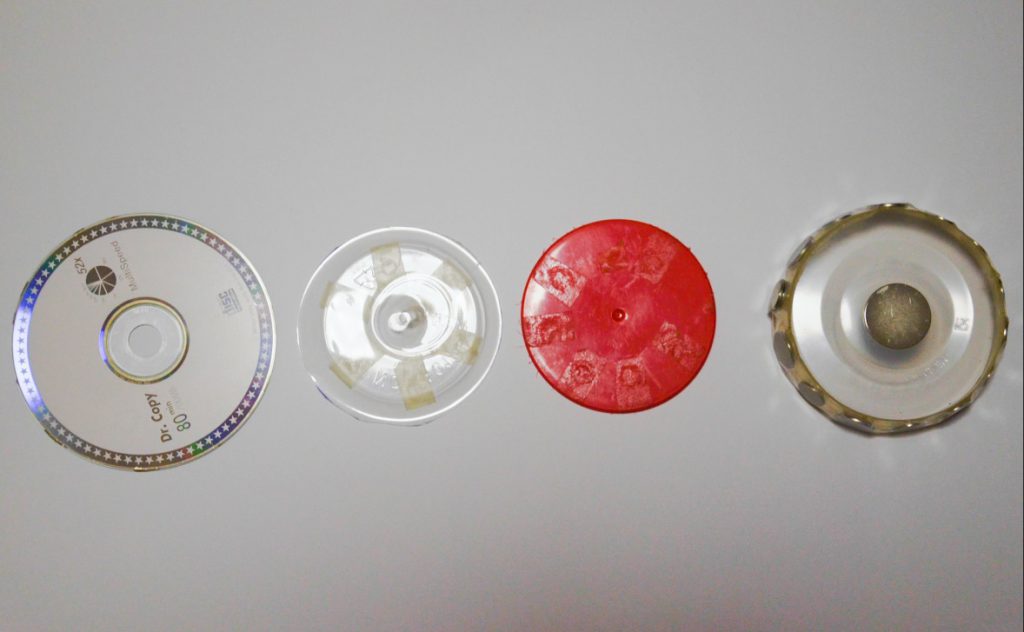 I had various ideas to make use of the spinning motion. I could make it like a swing ride, have something attached to the base, so when they collide, they would produce sound in a way like wind chime. I also thought of adding bristles along the side of the rotating disc, the bristles will brush along the edge of the container and produce sound. Basically there will be layers of different sounds.

When i went to art friend, i saw this interesting globe ball that can be separated into half. I thought it would be fun to test it out like a roly poly toy. With this new toy, i thought of various ideas like having a slide circulating the globe. Thus, when the rotating disc hit at certain point, there will be a mechanism that release a ball and it would slide down the slide, producing an echo and Doppler effect. However i feel that this is too time-consuming when i had other assignments to do too. Hence i decided to create different layers of sound instead.

I explored with different materials and textures to see which give the result i wanted.

I wanted sounds that goes well with each other and create a sci-fi music like at 6:48-7:00.

This is my first prototype which i presented in class. 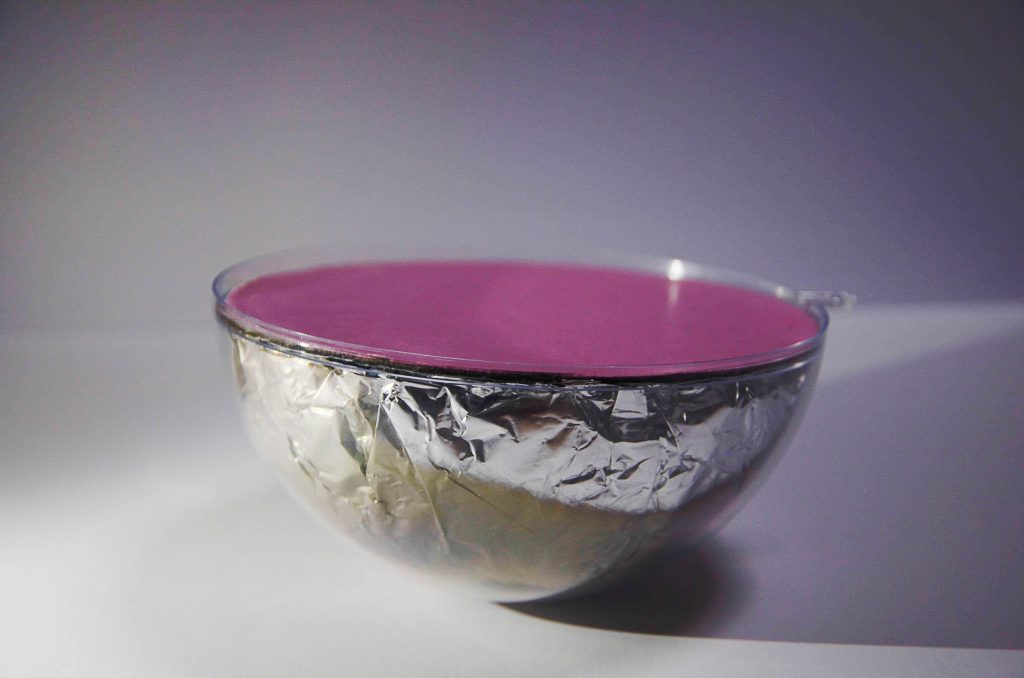 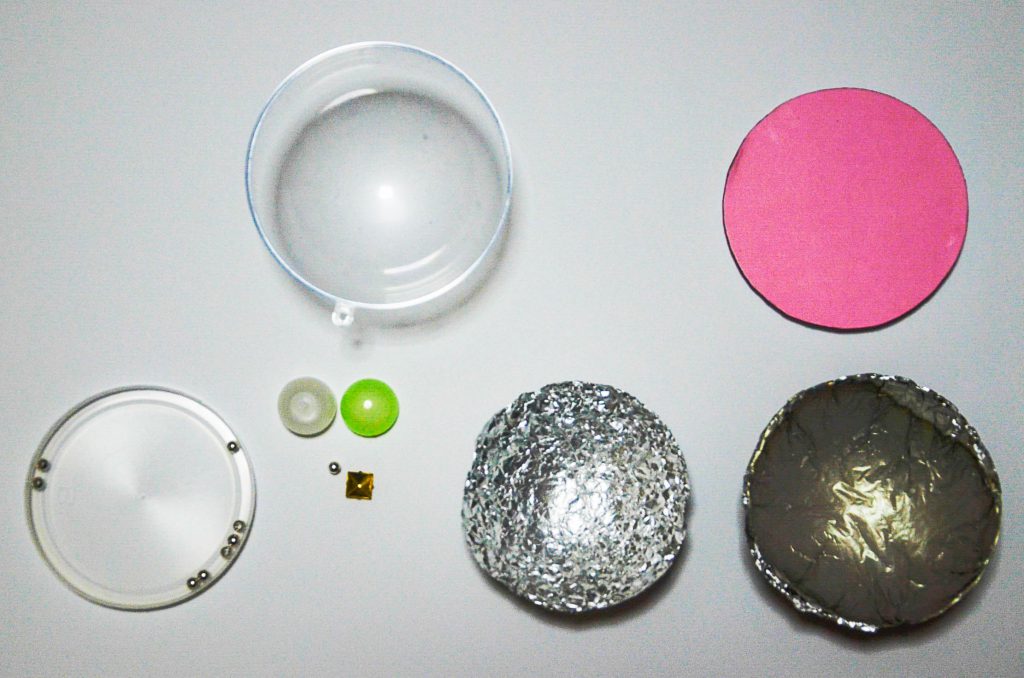 Lots of layers inside.

Now let’s hear the sound individually in each layers.

First up is the capsule that contains a bead and a decorative piece.

Secondly is the capsule rolling around on very crumpled aluminium foil. 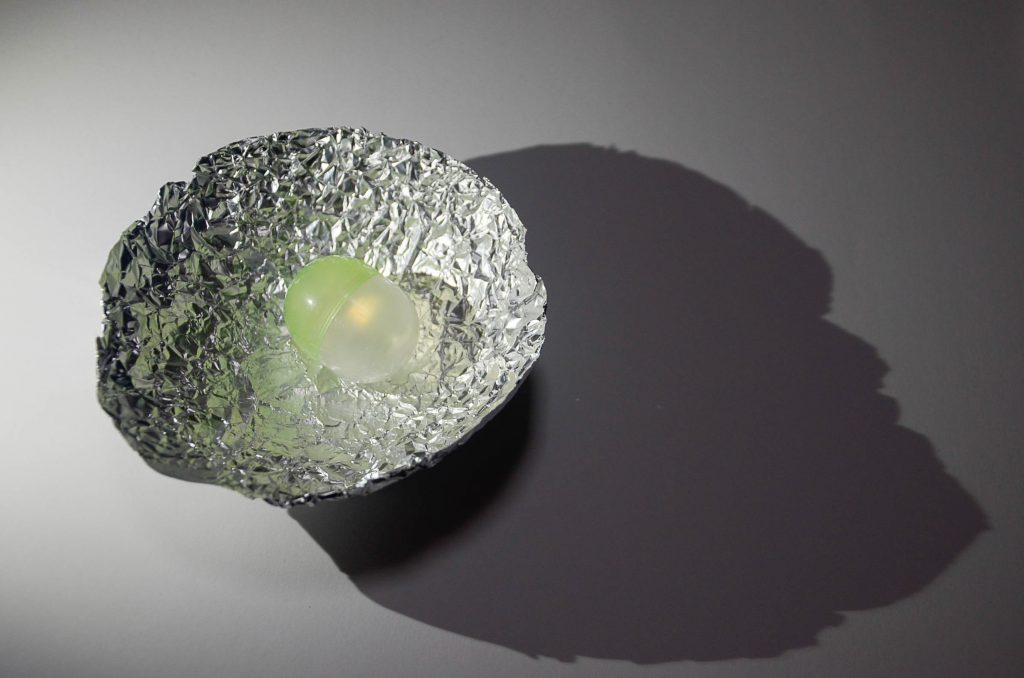 I made the shadow of “Ben” Grimm’s face! So cool!

Thirdly is a smoother surface of aluminium foil. 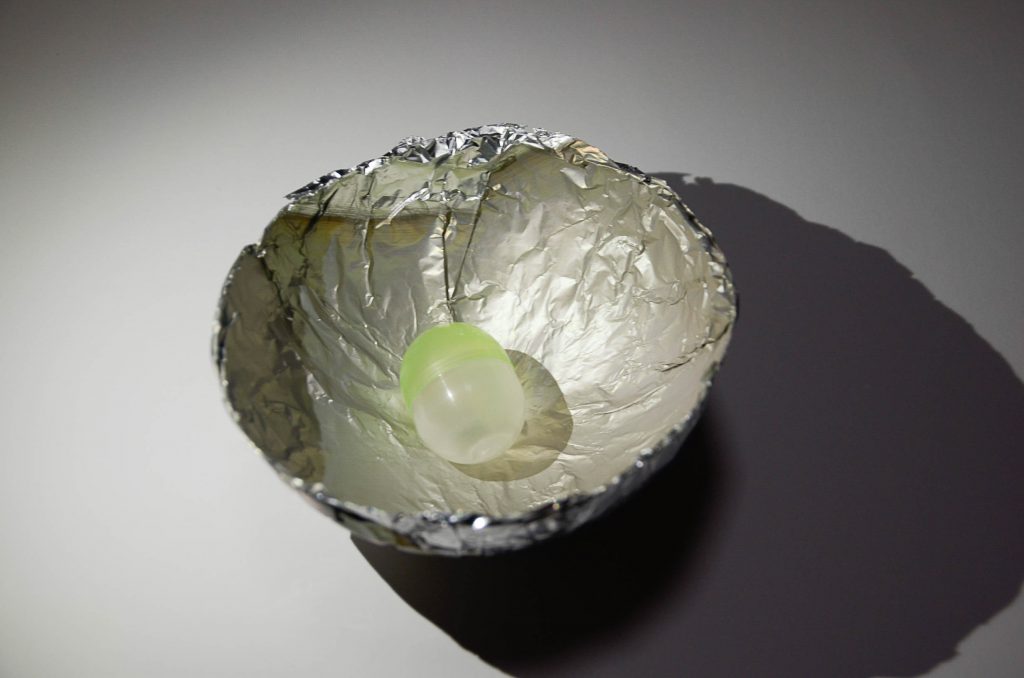 Lastly, is the beads circulating in the slightly rubbery lid. 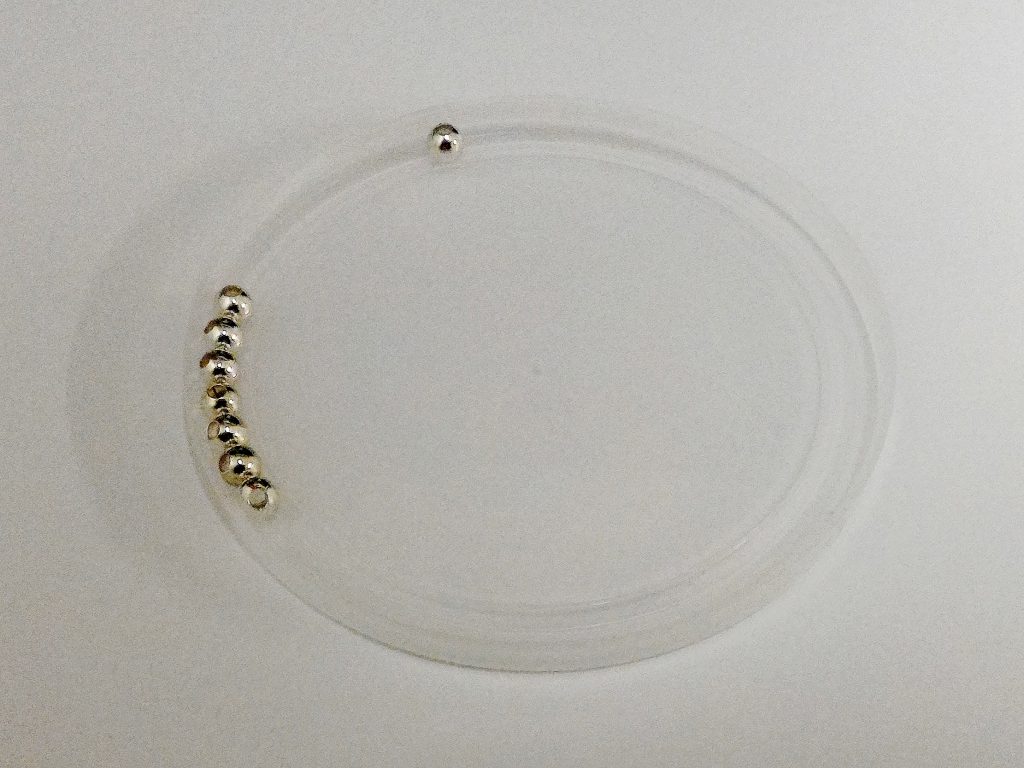 This is what the capsule sound like without any foils. 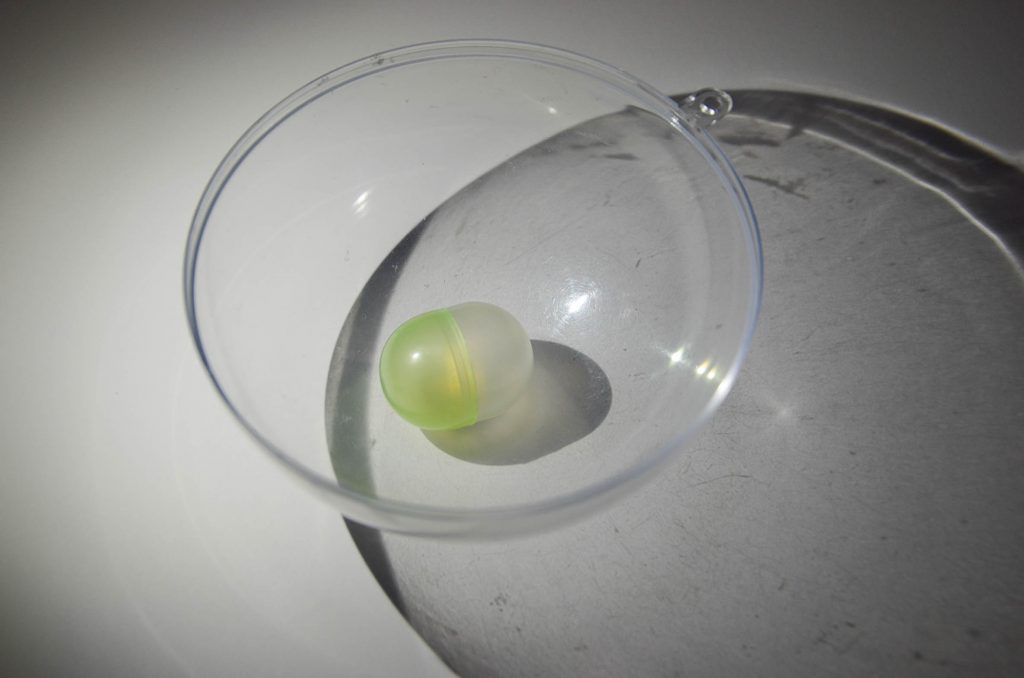 Comments from Mrs Cherly: The sounds are very delicate. Maybe can try to extrude out the lid using wire mesh, so the sounds can project out.

Personally, i like soft low pitch sounds. However i feel that my sounds doesn’t have a clear distinct separation with each other because they are all trapped under the thick cardboard lid, a poor conductor of sound. After seeing the class presentation, i realized i should make my sounds louder. Hence off to the next prototype. 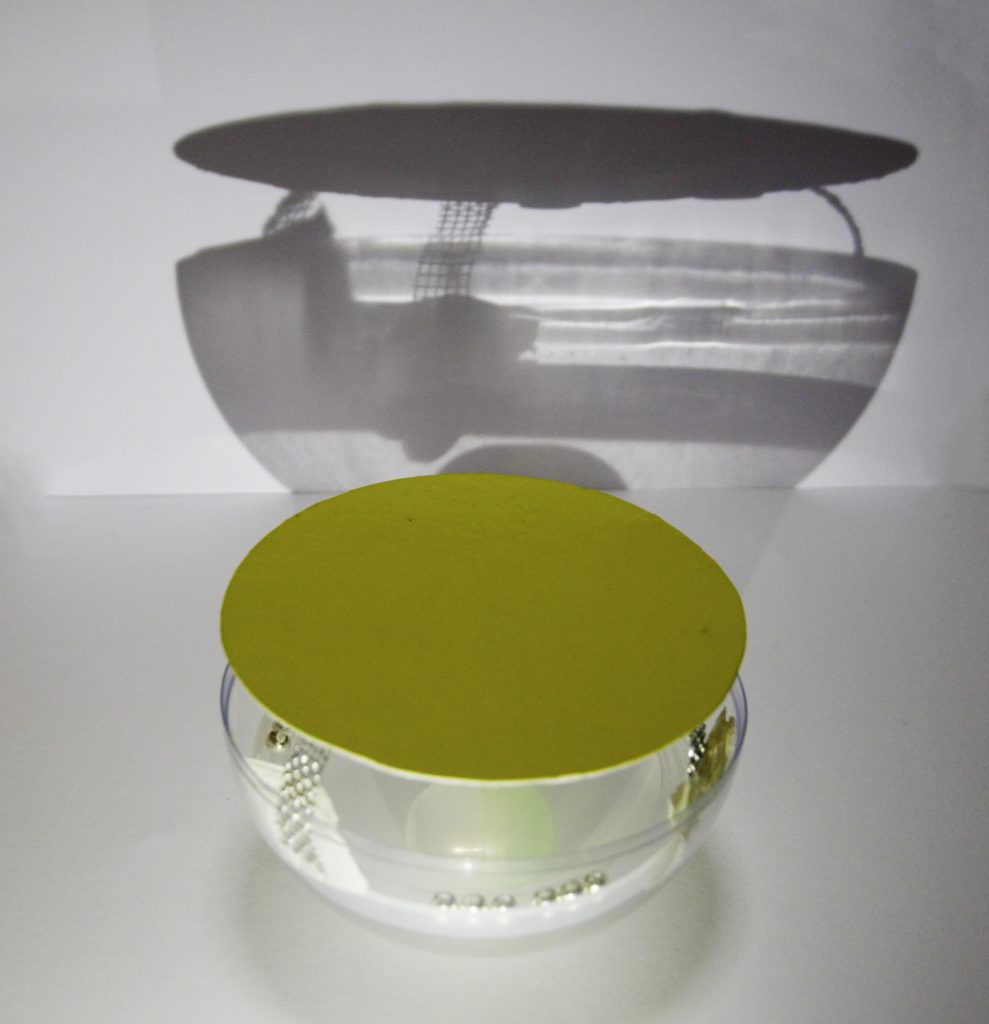 Following Mrs Cherly’s advice, i changed the material of lid to a thinner cardboard and extrude it out. I feel that changing into a thinner layer of material has the same effect as protruding out the lid. Hence i decided to go with a thinner layer instead. Ultimately, i choose a pvc sheet so that the inner layers could be seen as well. 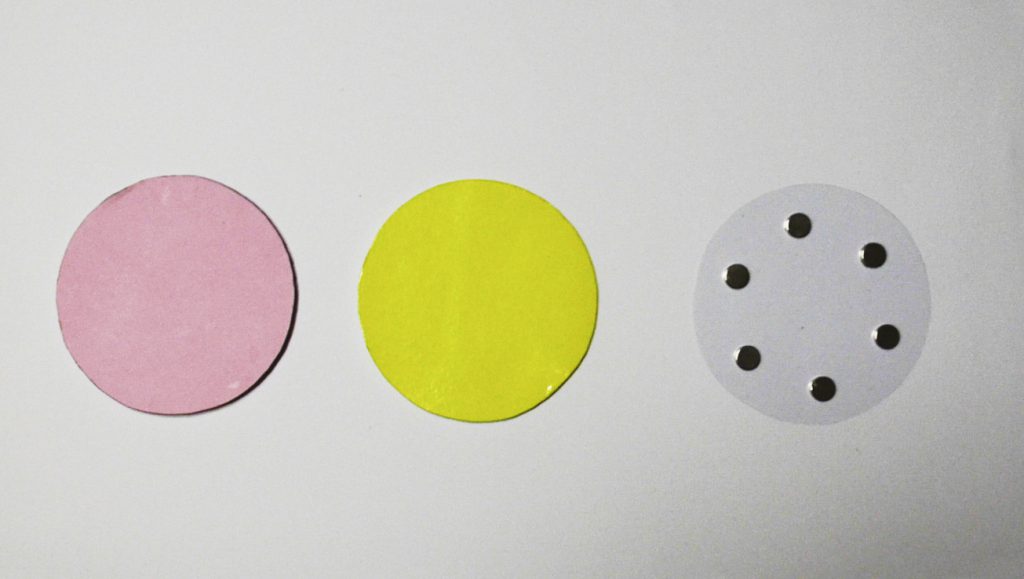 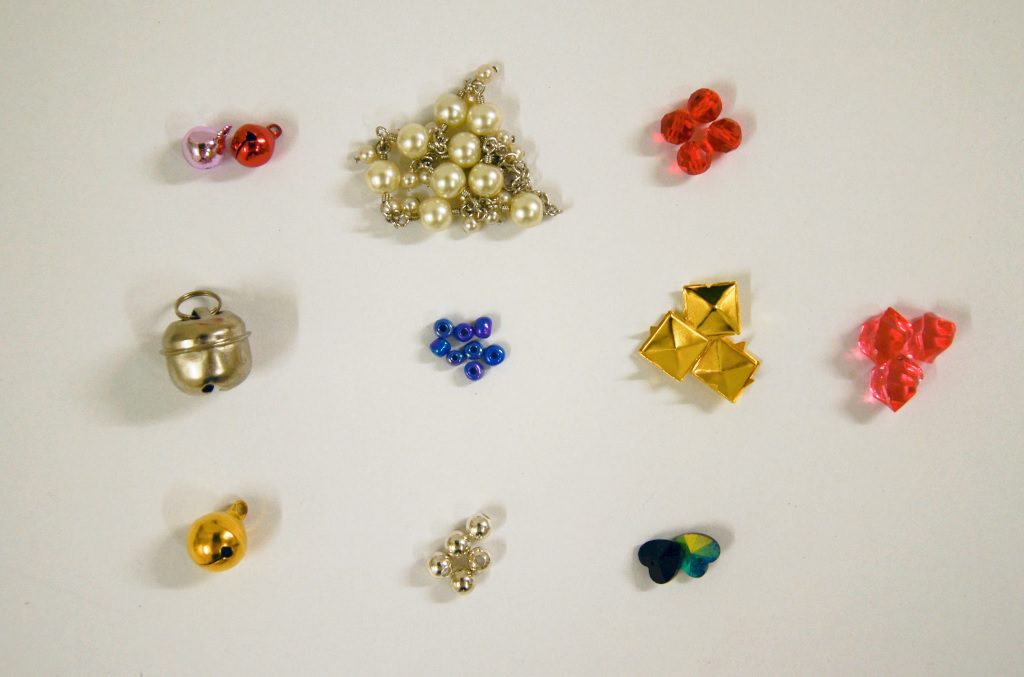 They look so pretty together! It look like i’m doing jewelry photography. 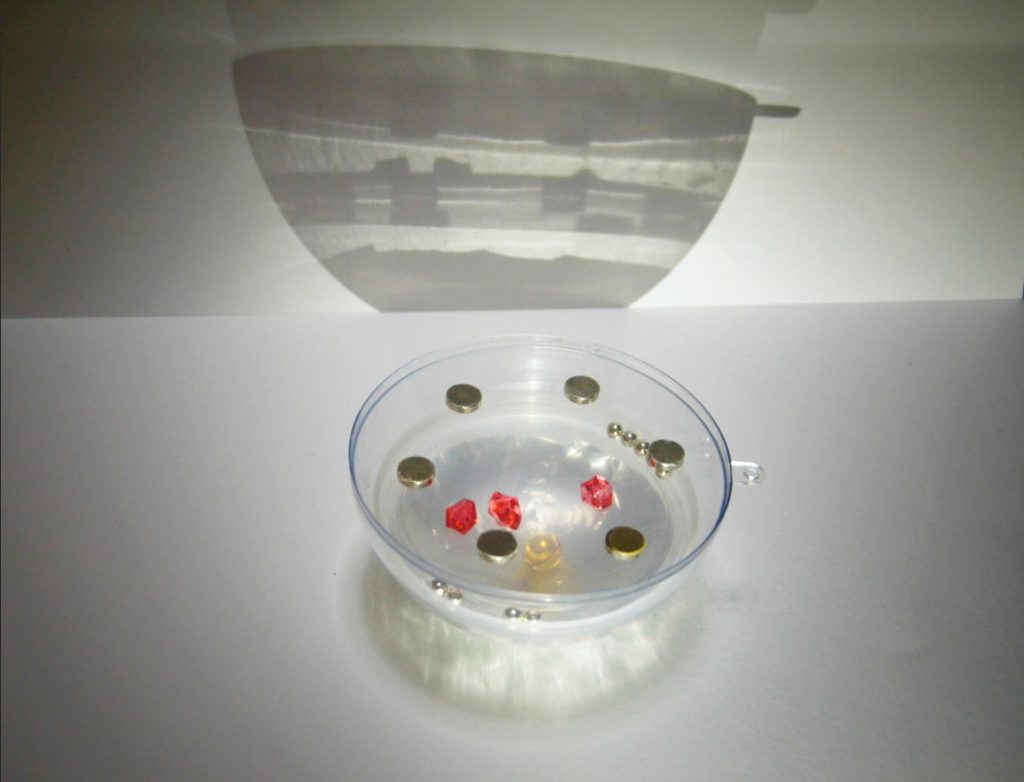 With this i created a new planet, Yiruto! The tiniest, noisiest planet the mankind ever discover on this universe!

Rolling the bell on foil. 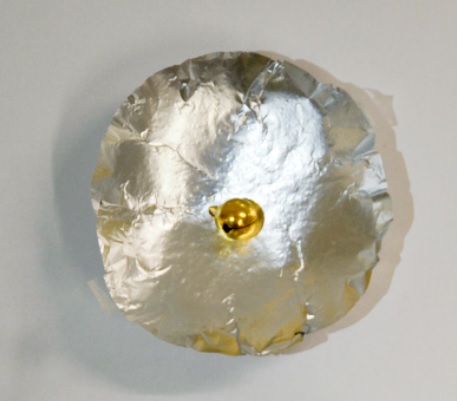 Rolling the bell on foil in bowl container. 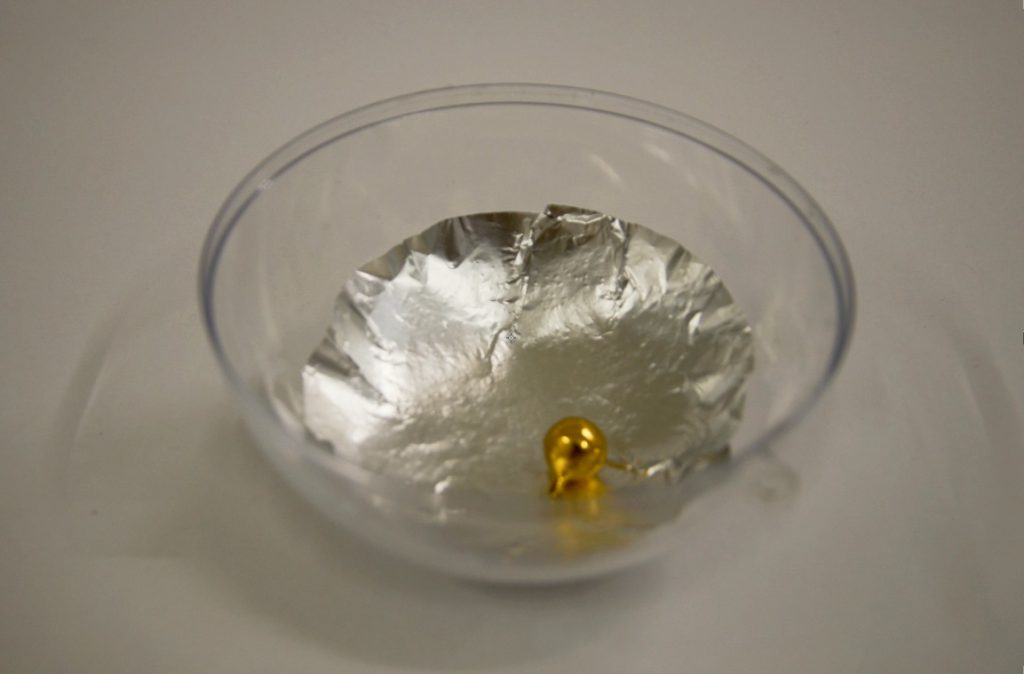 Beads and decorative “stars” on top of a rubber lid in a bowl container. Occasionally the metallic beads will bounce up and come in contact with the container and circulate on top of the lid. The friction between the container with the bead produce a unique vibrating high pitch sound. 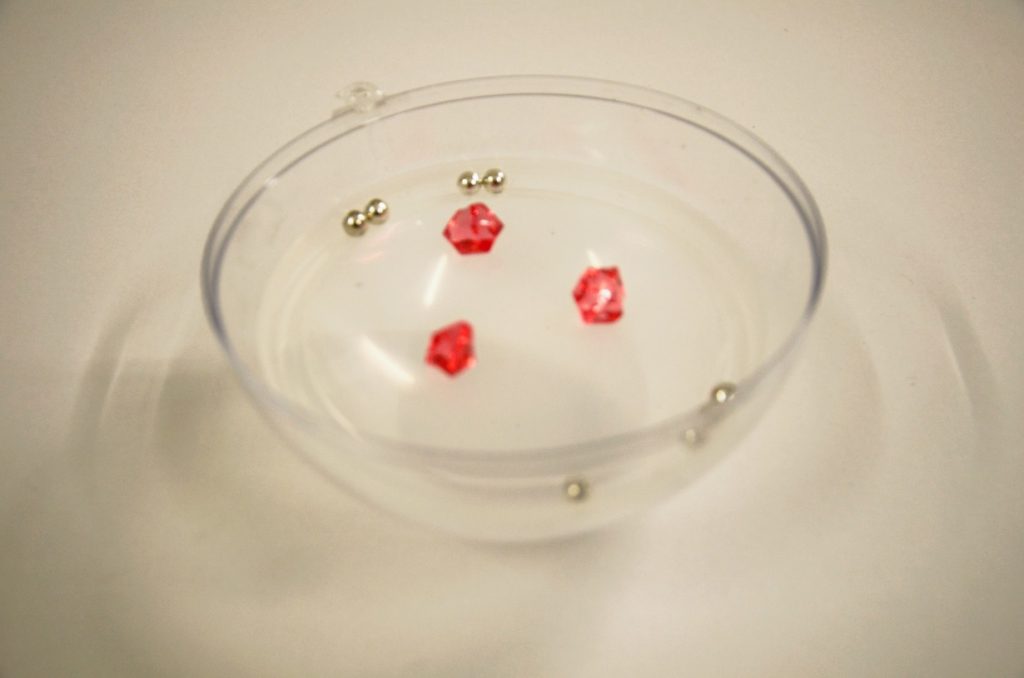 After a final consultation with Mrs Cherly, She advised me to lift up the foil a bit so there’s room for the bead to circulate. 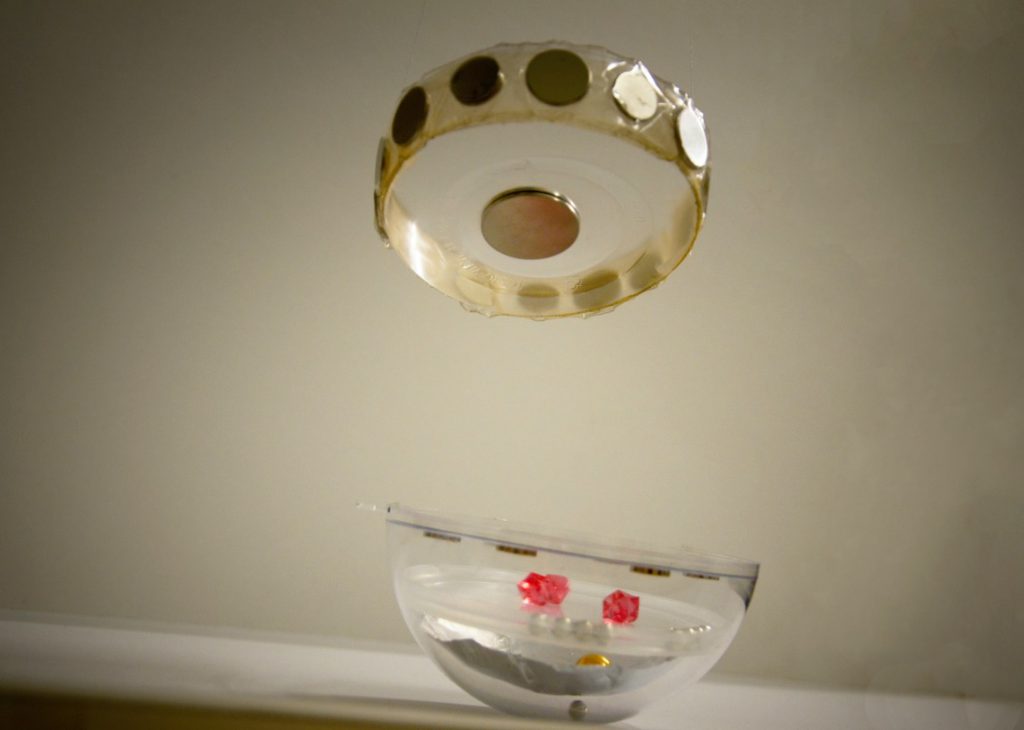 How a metallic bead sound make a difference. Upgrade Version of Yiruto in Action

When testing out different bells, i realized some bells are conductor of magnets. This is the strongest among all the bells i tested. There’s a whole new approach of making sound in this video.

Personally, i like the sound of the first version of Yiruto. The chiming bell sound is louder and create a beautiful sound with some occasionally vibrating beads. Then again, the second version fit my sci-fi theme better. Although i feel that the echoy sound could be better improve to fit my theme.