Before arriving to my final model, i did several case study and sketches. 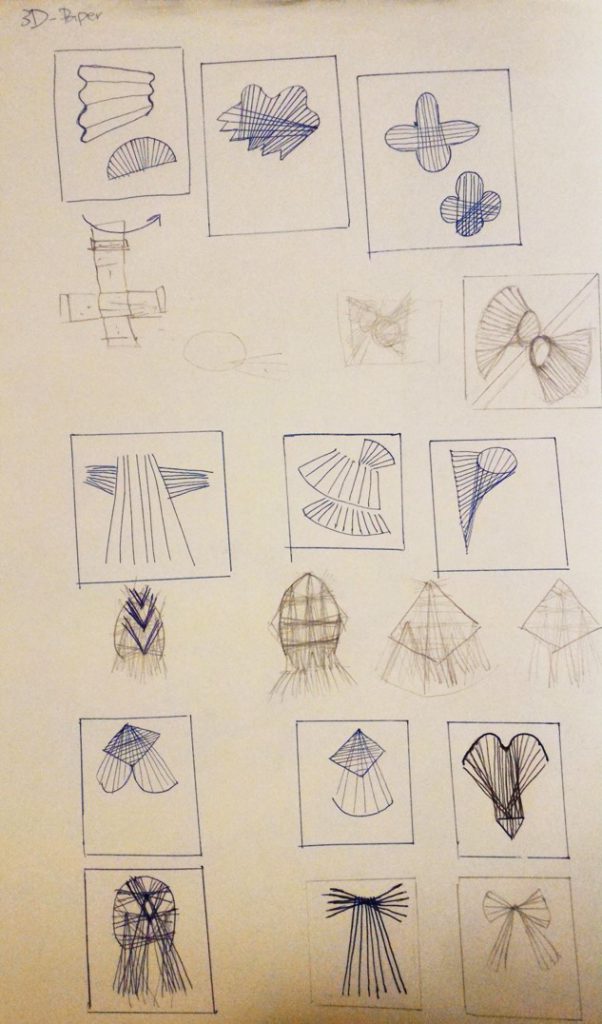 1.Do then think! I crafted out my sketch without any planning or direction. 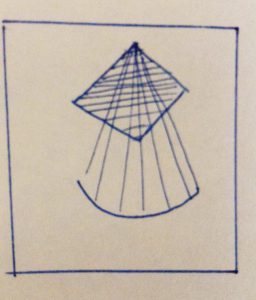 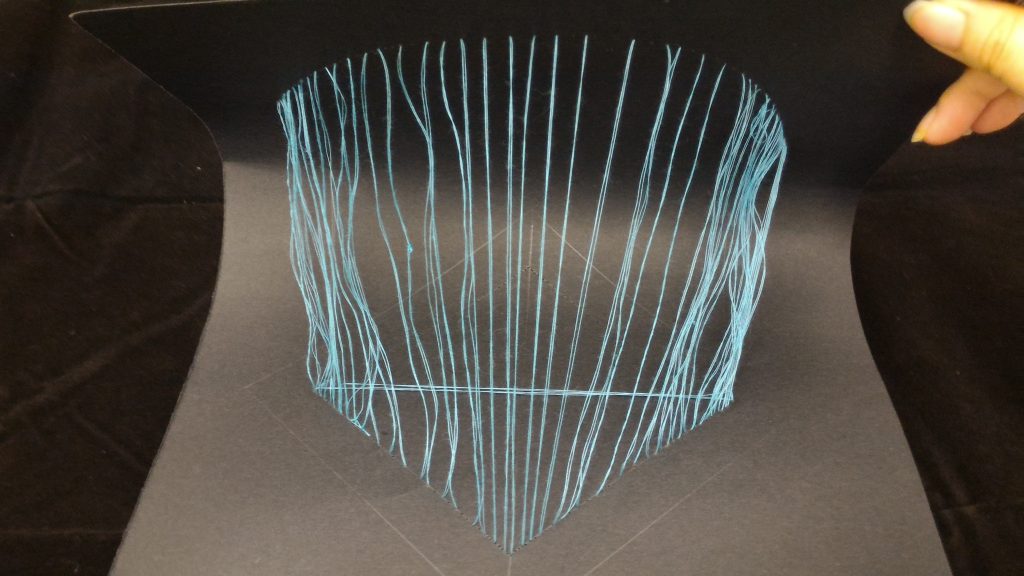 Result: Well.. looks aside, i think i had an idea of how to do this project now. I had to plan out where the lines goes and how the paper will become from the tension of the strings. I also have to improve on my workmanship .

2. Study on forming an organic structure by making the lines converge the paper.  I tried to cover up the negative space on the back of the paper with interlacing of lines going in a spiral manner. 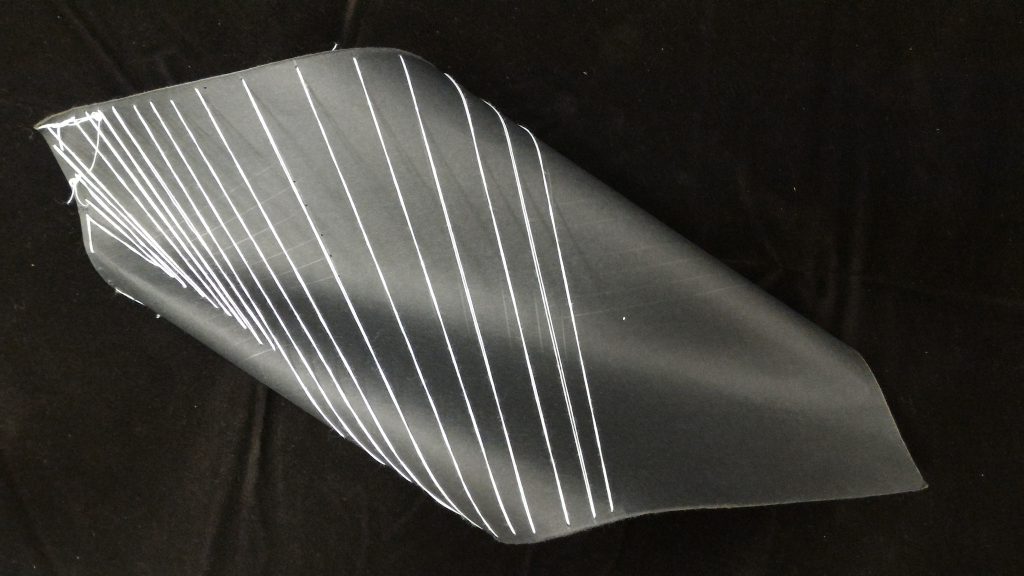 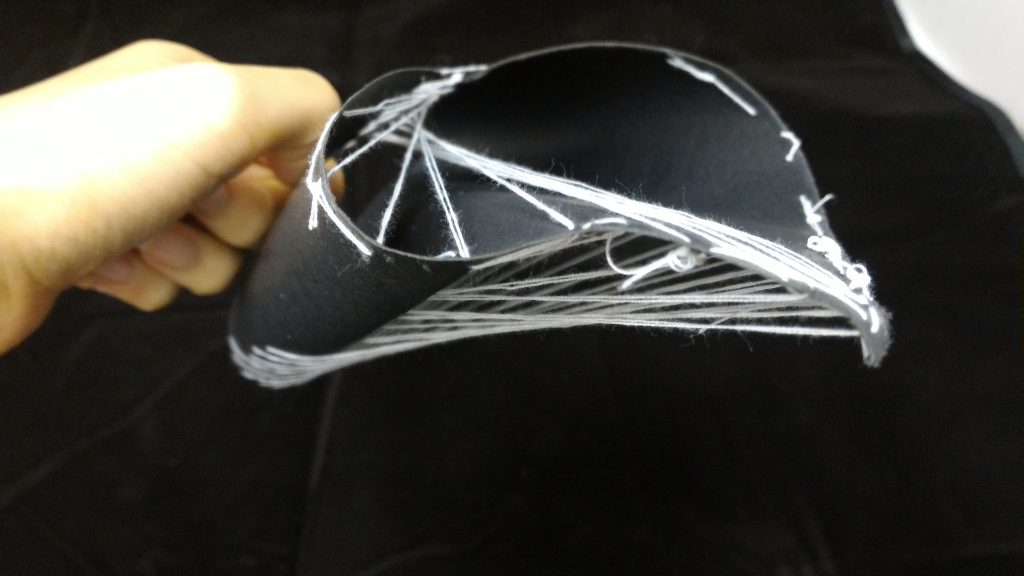 Result: The negative space of the paper turned out to be very small and a bit flat, so there was not much room to work with. The lines knots on the back also ruined the whole aesthetics, so i decided to scrap this idea.

3. Study on simple geometric shape of circle interlace with a line. 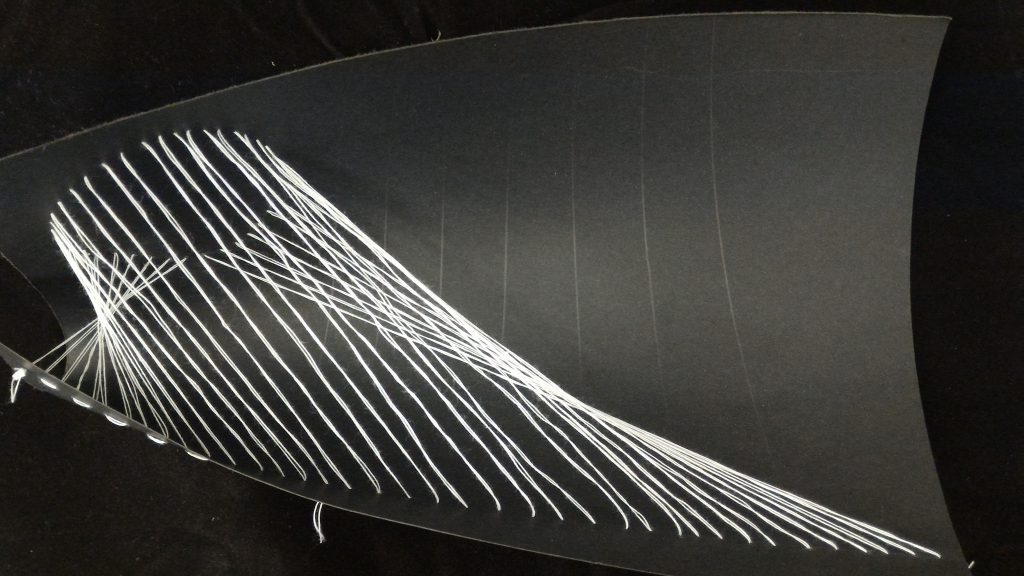 Result: By working on evening the pitch, i obtained a clean look of the structure which i quite like it.

4. I was inspired by my previous case study and  explored more on simple geometric shape with line. This time round, i work with triangle and a wavy line. As the triangle is symmetry, i thought of doing the same for the wavy line. 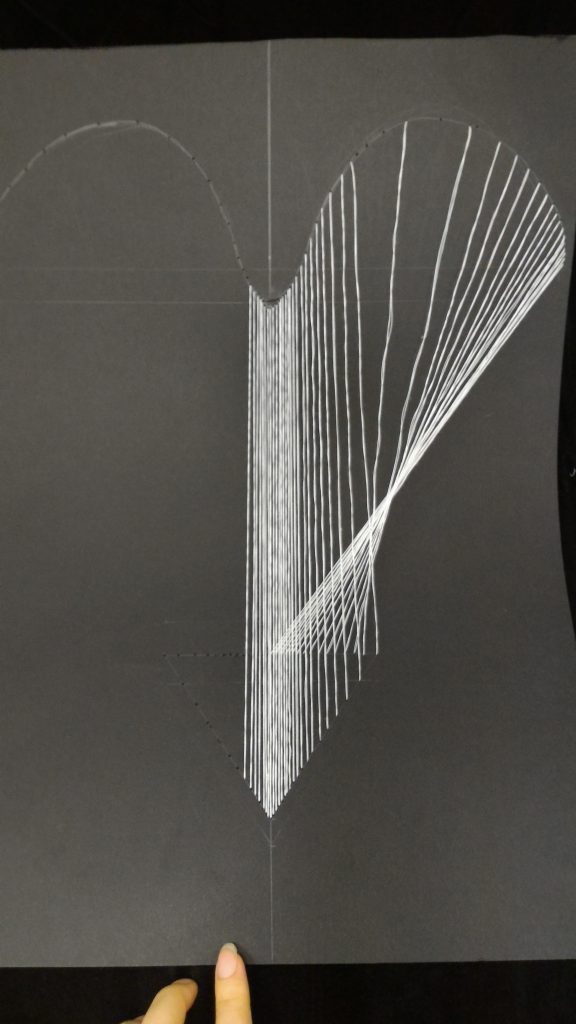 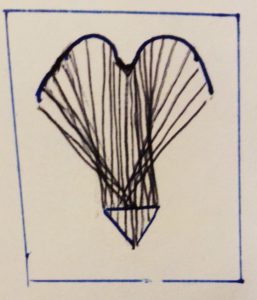 Result: It did not turn out the way i wanted like how i sketched it. I had a difficult time varying the pitch. On the middle of the wavy line, the lines should be more dense before spreading out in a spiral manner like a paper fan. Hence, the lines from the triangle should transit smoothly interlacing the wavy line. However, that did not happen, the straight lines in the front and the diagonal lines at the back look awkward together. There was no flow in this construction, so i scraped it.

It involved the intersection of horizontal and vertical lines. I was interested in exploring the effect of the lines pulled by an opposite force in the middle, so there will be symmetry. 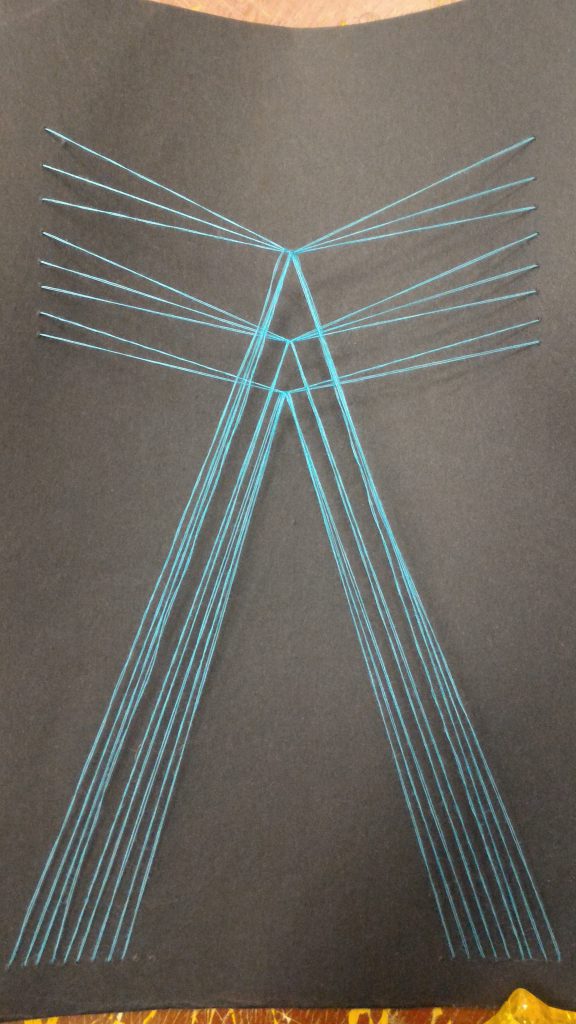 Link between all Case Studies

The appropriate tension of the string is very important for the overall aesthetics and construction. If the knot I tie in the end is not close enough to the hole, the tension of the string loosen, making my whole composition look flimsy. The same goes for if the tension of one sting is too much, it would warp the paper and the whole plane will collapse. With this knowledge in mind, i meticulously craft my final model.

After drawing several sketches, i decided to use back the sketch from my first study model. Back to the start with more bangs and booms! 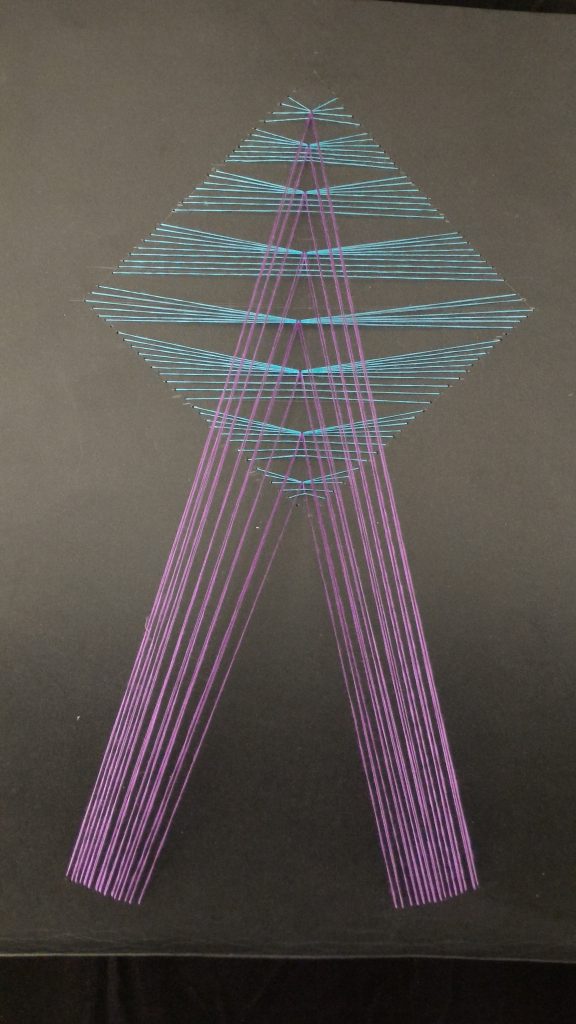 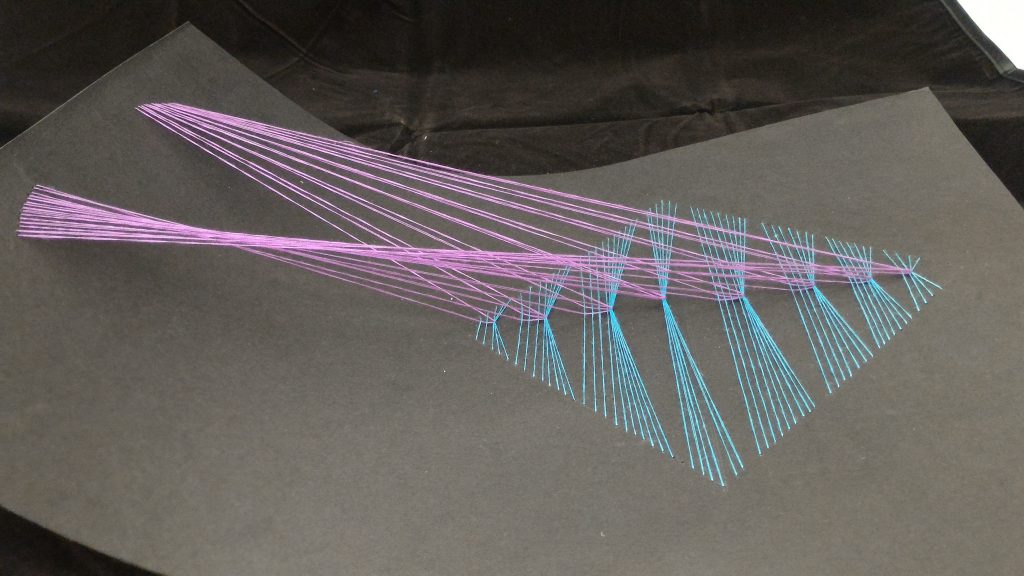 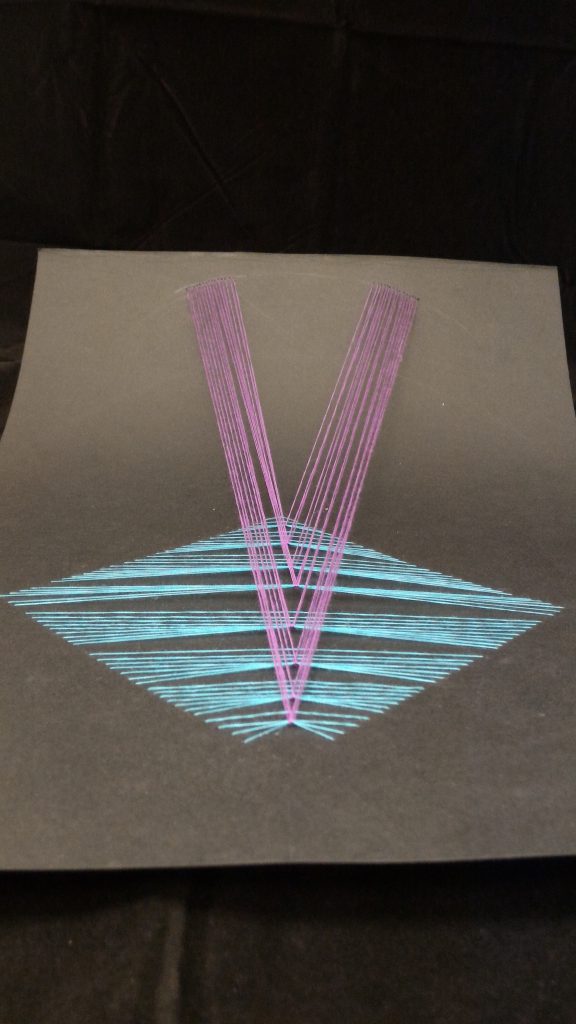 Result: Looking from my first case study to my final model, i was very happy with the result.  That was until Peter mentioned that there is only one plane. Then i realized my mistake. I was too focus on the aesthetics of it that i forget the whole project is on lines and planes. I wanted to create a pattern on the diamond with wide negative space in the middle and progressively become smaller on the sides. From my case study, I figured it would be hard to achieve it if i created a plane of horizontal lines. Hence, i didn’t exert any tension on the paper at that time. I will remember to place higher emphasize on the goal of this project from now on.