The following is an elaboration of one of the perviously discussed FYP ideas that I am most interested in and confident of executing over the period of my final year in ADM.

I See You is an interactive installation that aims to raise awareness about surveillance, spying, and stalking in a rapidly digitized world. With the rapid rise of ‘smart nations’ and connected cities world-wide, how much are we willing to give up in exchange for a more modern and convenient environment. Are we exchanging our privacy for a cause that is much greater than us, and how much of it is truly beneficial to society? This work aims to raise the dystopian question on whether the advancements of technologies and the convenience that comes with it are worth the trade-off in the civil liberties of the privacy of an individual. Do we, the Snapchat and Instagram generation, live life too lose and dangerously in an age where a simple username is capable of revealing whole identities to strangers both online and offline.

Visitors will be tracked using video analytics during their visit to the FYP show with hidden cameras. Using facial recognition algorithms to trawl through social media networks, visitors to the installation are then presented with their own social media feeds and online interaction. The installation would be in an enclosed space, so as not to ruin the element of surprise for the visitors. The audience will also be able to look through the publicly available social media interactions of other visitors that have passed through the FYP show’s exhibition space.

The installation would ideally be placed in an enclosed space such as the Truss Room. The three projection screens as well as the space in the middle would be ideal for recreating what I envision for the installation. The projections will be used to show the various live video feeds with the video analytics overlay showing what is happening in real-time. Some of these facial recognition algorithms running, surveillance looking UI resembling tropes from spy movies and games, and the results of the facial recognition will also be shown in these projections, creating a security console experience for the viewers.

The aesthetics of these projections would be black and white videos with markers and indicators that are overlaid to create an uncomfortable, dystopian appearance. Some inspirations that I drew from include the video game Watch_Dogs. 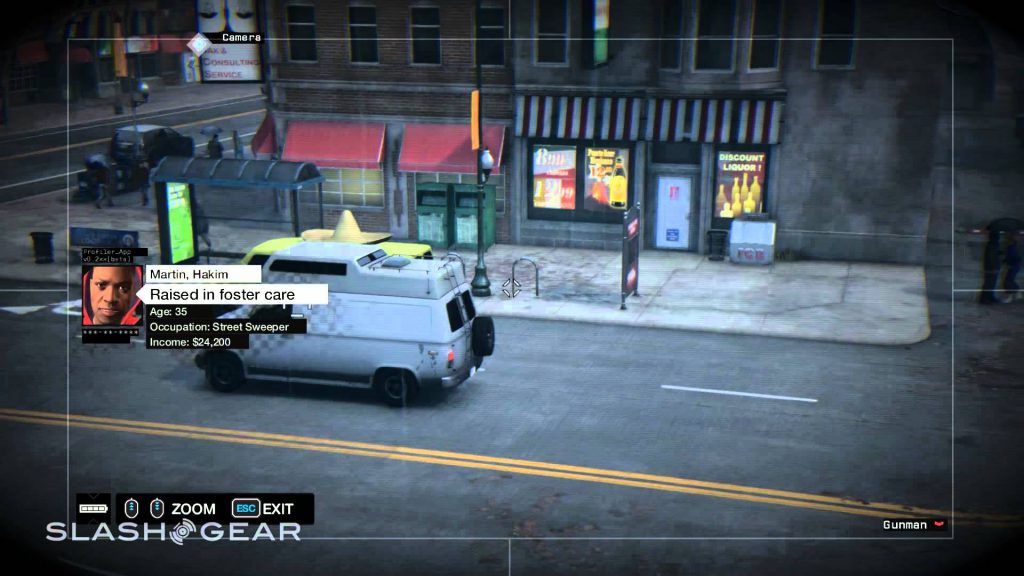 The main interaction console in the centre of the room will be a large touch sensitive overhead projection of LCD display. Through this console, users will be able to access the social media feed gathered from all the visitors that have made an appearance in the show. This aims to create a sense of discomfort in the visitors to the exhibit, showcasing how easy it could be for strangers to be able to access private and intimate aspects of someone else’s life. Users will also be able to interact with the projections on the screens from this console, choosing to display items and feeds on the projections. I Know Where Your Cat Lives

I Know Where Your Cat Lives by Owen Mundy and a team of creatives is an online artwork that seeks to raise awareness about data privacy. It uses publicly sourced images of cats from social networks like Instagram and Facebook to create a realtime data visualizations of where these said cats are located. The site uses the geolocation metadata that’s embedded in the photos to visualize the exact co-ordinate of the photo on a map. Users are able to pan and zoom through the map to look at the various cats that are catalogued on the visualization.

The satirical component to this work lies with the fact that cats are unable to take pictures of themselves. As such, these geo-location co-ordinates point straight at humans that are posting such pictures, indirectly to also allow users to know where you as an internet user lives. I think this work is pretty successfully in creating a sense of unease once you begin to realize what is happening behind the scenes. I would like to create a similar sense of unease that requires a certain degree of interaction from the viewers. In other words, I would not want the fact that I am exposing people’s personal information that they have willingly provided, to be apparent right from the beginning.

Border City is an installation by Natasha Jen and her team from Pentagram. It was made for the Mexican Pavilion for the London Design Biennale. The work features infographics and animations projected onto a panoramic wall that circles the entire exhibition space. It also features a central console in the centre of the room. While not interactive, I really love the layout and presentation of information, and the use of space within this installation. I want to create a similar all encompassing effect for my own work as well. This is a huge reason as to why I think the Truss is an ideal location for the work that I am proposing.

Face to Facebook stole one million Facebook photos and, using face recognition algorithms, posted these photos to a custom made dating site where users can be matched with a potential date. The social media platforms to which we post our data on aren’t the only ones that have access to our information. Depending on our privacy settings, our photos and intimate details can be equally as exposed—available for download to just about anyone. 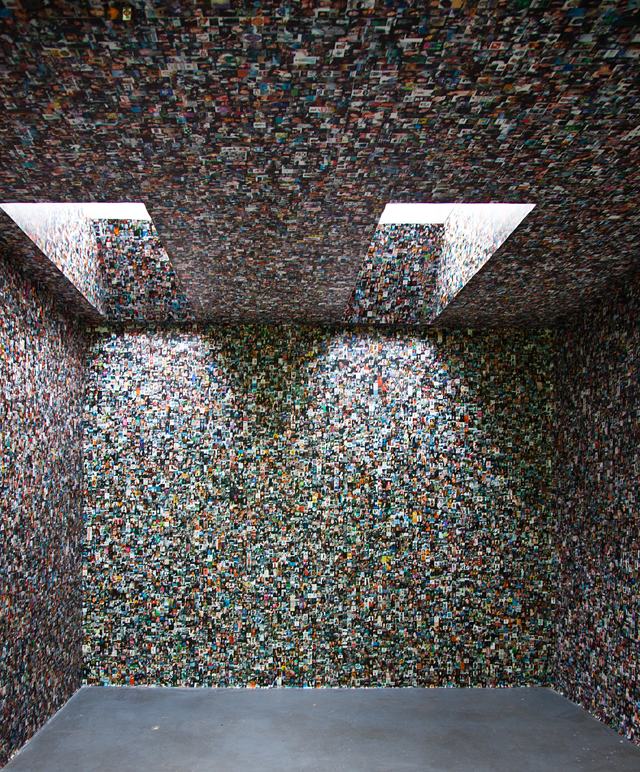 In the same vein as the work above, fbFaces is a web-crawler that targets public profiles for profile pictures and copies the image, Facebook ID and name. It then proceeds to do the same thing for your friends’ accounts. The artists printed out the downloaded profiles they collected and created  a wallpaper covering every surface of a large room. Profile pictures are reduced to mere pixels, as if to make them insignificant in the simplicity of their theft. They no longer represent people but information that is easily downloaded and appropriated—mere pixels.

The importance of these two works shows that what I am trying to achieve with my work is rather well within the realm of feasibility. In fact, my preliminary research into Facebook scraping and facial recognition led to a few possible algorithm models that I could emulate to create my own version for this project. However, the research also seems to suggest that I may have to alter my processes slightly and rethink how all these various components will fit together in once large installation that seems cohesive and a part of one artwork.

The proposed production schedule may be found here.

After doing more research and sitting on the idea a little longer, I have come to realize that I would in fact need to change up the way I conduct the facial recognition process and how I obtain the faces of the visitors. I was drawn towards the concept of doxxing, which the process of using publicly available data to dig around for someone’s personal information such as bank and medical records. While the practice of doxxing is technically illegal, presenting already publicly available data is not. As such, I have begun playing around with the idea of creating another section of the installation that would be a pre-cursor to the “main room”.

I came up with the concept of a Photobooth that visitors must go through before they enter the Truss or exhibition space. This photograph of the visitor will allow me to run facial recognition in a much more controlled and systematic manner as opposed to attempting a real-time scan on the live video feeds. This would then allow me to get much more accurate results. As visitors leave the exhibit, I would ideally be able to provide a print out of what the viewer has made publicly available and that I have been able to scrap while the viewer has been going through the exhibit.