Now that I had my initial thoughts and ideas, I decided to commit them to paper and start planning out my entire Zine. The first thing that needed to be done was to firm up the contents of the Zine. 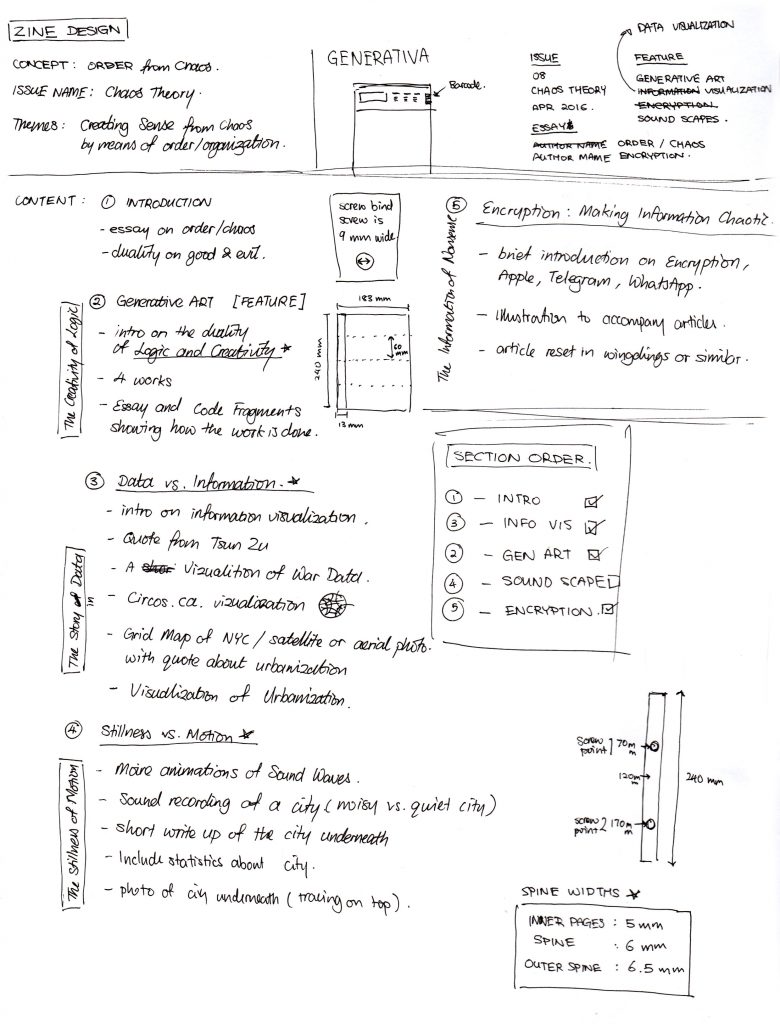 Ina had initially cautioned us against creating too many new assets for the zine. Instead, she had asked us to focus on working with what we already had and reinterpreting them in new ways for the purpose of the zine. However, after thinking it through, I felt that creating a few new assets here and there would not be too big a deal. I felt it would tie the entire zine together, as opposed to bits of unrelated things forced together.

I broke down the Zine into 5 sections.

The Introduction would be a brief start to the magazine. I intended to write this myself. It would set the stage for the reader, cuing them in on what to expect from this publication.

This section would be dedicated to the generative works that I had created for Point of View. Instead of using the works as just a background or a page element, I decided that the zine would feature them and go into slight detail on how the works were put together.

Going with the theme of order and chaos, I wanted a section dedicated to data visualization. This is a form of digital generative design that I had been interested in previously. However, I hadn’t had much opportunity to delve into it. I felt this would be an apt time to do this. The concept of data visualization was also very tied into the theme of the zine. Information can be very chaotic, and visualizations and design can be a means to create order out of this chaos. I have been looking into two possible softwares for creating the design; Circos.ca and Tableau.

Inspired by one of the compositions I made for Typographic Portrait, I wanted to use this method again in my Zine. This time however, I wanted the sound waves to represent Chaos. I got the idea of getting the ‘sound signature’ of a city and exploring what a city’s sonic signature might look like. I wanted to also include the moire animation aspect from the original. This would make a part of my zine interactive.

The final section of the zine would address encryption. This has been quite an upcoming argument since the iPhone incident involving the San Bernadino shooting. I also felt this would be apt for the zine and encryption is a way of taking orderly information and making it chaotic by scrambling the data. 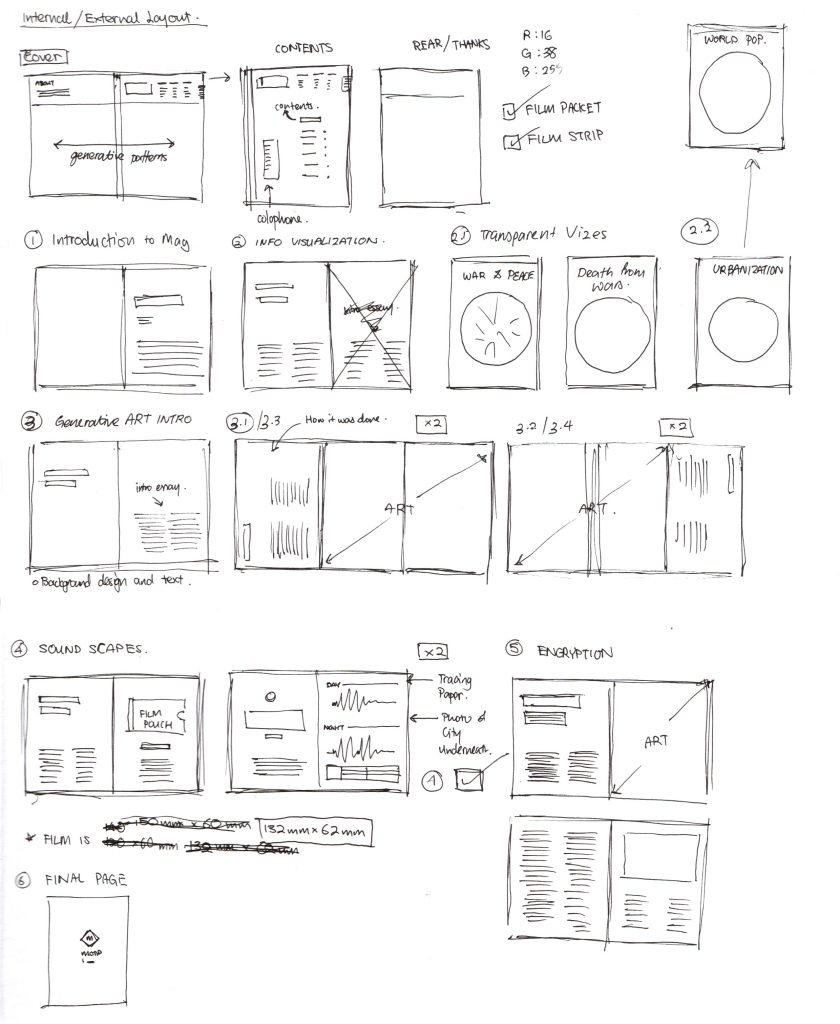 Given this direction and sections, I proceeded to plan the layout of the magazine. I felt that the initial 8 pages suggested by the brief might be a little too constricting for the purposes of this zine. As such, I decided to work with a few more spreads. At this point, I also decided that the zine would be monochrome with one additional color. I picked a vivid cobalt blue as the accent color for the Zine. I liked the look of monochrome with accent colors, especially from what I had gathered in my mood board.

I also tweaked the size of the zine to be slightly larger than A5. I wanted a size that allowed for the various pages to breath and work together with what I would including in the contents. I decided on a page dimension of 170 x 240 mm. At this point, I also decided that the Zine should be screw bound. I wanted to have pages that were made of transparency and trancing paper. Given these circumstance, the only feasible method of producing the zine would involve some form of perfect binding, where the pages were all printed on single sheets.

Since I now had the freedom to have each spread unique in terms of shape and material, I wanted the section featuring the generative art to really stand out. I came up with a layout that had the art work on a “fold out” page. This page was twice the width of a normal page. This allowed me the have information regarding the work on one side, and the entire composition on the other. This can be seen in my planning above under Section 3.