One of the key missions of the Smart Nation Initiative is to get the private sector in Singapore to work alongside the public sector to create a nation that is informed, driven, and made better by technology. The initiative aims to use technology to provide citizens with better services and an all round better quality of life. The government aims to do this over five key areas:

The government will support the public sector by making data and APIs available to private individuals and companies to co-create tools and applications that will take advantage of these data sets and improve the lives of citizens. There are many ways in which such data can be used to help people. A straightforward example would involve the creating of interfaces and data visualization that will help people visualize information. This could be something as simple as a mobile application that tells you how congested the roads are, or a notification tool that informs you of the weather.

Most of this data ends up being used to drive public convenience. The data collected can be used by average citizens to plan their day, or understand the world around them better. I also provides possible benefits in terms of healthcare, by being able to warn citizens about impending climate conditions such as haze.

For government bodies, the data collected can help visualize trend and aid in city planning. Transportation and movement data can be used to measure the load on the public transport network and identify if changes need to be made to optimize the system. These changes can be as varied as constructing more roads, or upgrading the signaling systems of the rail network to better manage passenger load.

However, I am of the opinion that the smart nation initiative is only beginning to scratch the surface of what big data can do. Emerging advancements in the areas of Artificial Intelligence and Computer Vision have begun to allow us to analyze the world in a way that has not been previously possible. Techniques such as video analytics can be used by employing technologies such as facial and pattern recognition. Video footage of stores can be used to understand buyer behaviors and allow retail establishments to better plan their stocks, human resource and increase business productivity across the island.

For an invention to truly be creative, I strongly believe that the tools must be used and taken in a direction that is somewhat useful, but novel and unique in execution. I was lucky enough to be exposed to the smart nation initiative before this and have had the opportunity to explore and experiment with the data sets provided by the government.

My proposal for a creative intervention is actually something that I have done before, but wish to take on a larger scale.

For the class, Pattern, Art, Design & Architecture, I used real-time data visualizations provided by the Land Transport Authority’s DataMall API to create a data-visualization that was also a piece of public art. Entitled Flux, the work represents the flow of human traffic and the pressure on the public transport network. Particles flow in response to the number of passengers currently on the system and the speed at which the human traffic is flowing through the network. 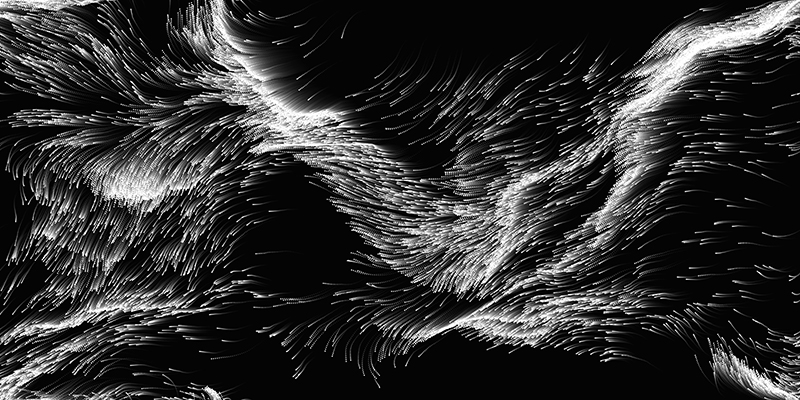 My proposal involves the use of data to create beautiful public art works that are as vibrant, dynamic and alive as the city we live in. Thanks to government initiative, we are already accustomed to seeing works of public art in our train stations and bus interchanges. But these artworks are largely made from traditional media and are rather static. There have yet to be attempts include and incorporate digital art into the tradition of public artworks in Singapore. If anything, large screen installations are only used for advertising and commercial purposes. It would be a breath of fresh air to create digital art installations such as this example above instead of just the paintings, murals and sculptures that we have grown accustomed to. 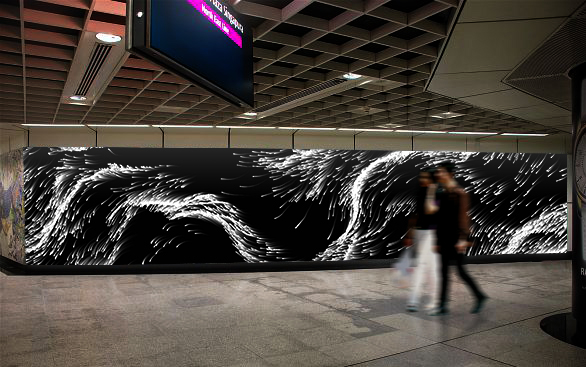 A project such as this will not only educate the masses to new forms of arts and technology (not unlike what Futureworld has done), but create artworks that also reflect the state of the nation as it is. The artwork is capable of also painting an accurate reflection of the state of the public transport network in a aesthetically pleasing manner instead of the facts and figures that big data is classically presented in.