The Art of the Networked Practice online symposium has been one of the few events that has truly challenged my preconceived notions as to what constitutes net art or performance art. Spanning a total of three days and spread across a wide variety of geographical locations, the symposium was a mix of online live performance works, keynote presentations by acclaimed artists and creators, as well as academic focused round-table discussions of the works that were performed. While it initially proved to be a rather disorienting experience for me, I eventually found my footing and enjoyed the entire process of being a participant in this social broadcast. The following essay will examine the symposium from the point of view as a participant and how social broadcasting seemingly serves as a proving ground for the expression of the poetics of the networked space. 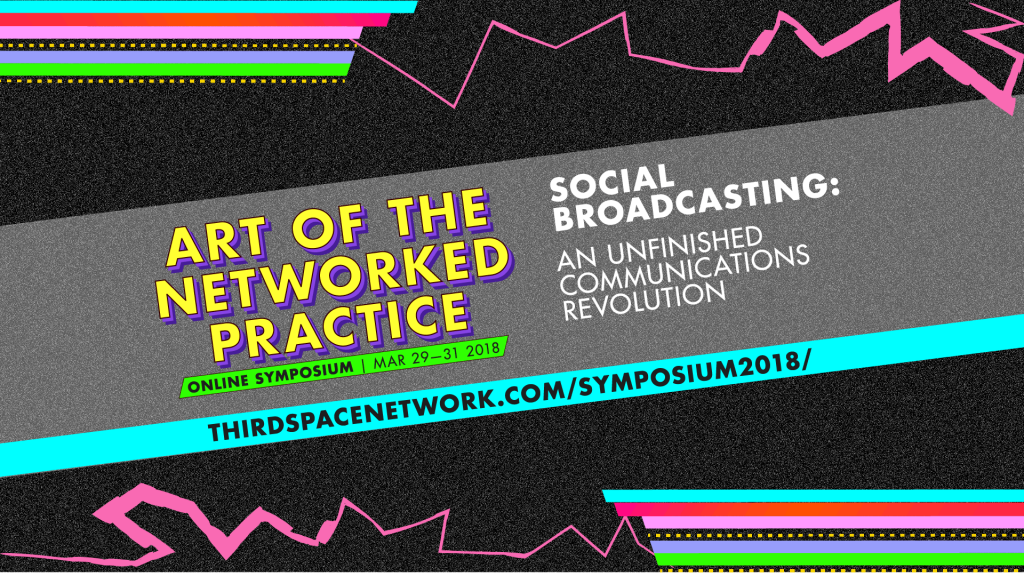 The symposium is strongly founded in the premise of Gene Youngblood‘s call for “a communications revolution… an alternative social world” that decentralizes the experience of the live broadcast through the creative work of collaborative communities. Herein we see the purpose of this get together, a breakdown of the hierarchal approach to the sharing of ideas where a system of one-to-many is adopted. Instead, the symposium embraces a more classical approach akin to a Socratic Dialogue where a many-to-many platform encourages all participants to freely engage with one another in any method they deem fit (within the limitations of the platform). However, any discerning individual should question the authenticity of this idyllic vision and determine if this symposium has in fact been able to achieve this.

Matt Adams of Blast Theory shared this sentiment when he remarked during his keynote about how the internet seemed like a compelling new platform full of promise during the early 90s. However, development and maturity in the space proved that it was unable to “match up with the utopian believer’s hope that new social relationships can be made possible by the new interface – internet.” In a previous interview with Maria Chatzichristodoulou, he also mentioned that the internet and it’s adjacent technologies were still largely “consumerist” and “solipsistic” in nature. To some degree, one could pin this on the fundamental communicative processes of the internet. The third space requires (and commands) a different kind of presence in order for our voices to be heard. This is seen throughout the symposium in the various facets of the broadcast interface, the way participants engage with one another, as well as the shortcomings and failings of the network upon which this symposium exists itself. Ultimately, the network experience is centered mostly around the self, and this idea was seen constantly in all of the performances that we held during the conference.

Much of how the symposium was consumed and negotiated was determined by the user interface that it was broadcasted through. The idea of an amorphous space with no clear boundaries seems difficult to imagine with our everyday use of the internet, let alone an online symposium. The platform of choice for this event was Adobe Connect, a conferencing software that allows for many-to-many broadcasting by leveraging online collaboration technologies. The key part of the interface for attendees of the symposium was the included chat-box. A mainstay among all popular live-streaming platforms, the chat-box allows for the creation of a telematic space where people from all geographical locations are able to simultaneously exist in a shared environment. This creation of a temporal community is a significant shift to the way we are used to understanding gatherings of this nature.

In a regular symposium where attendees are all in the same physical space, there is a established decorum expected of attendees to defer control to speakers. The attendees are merely observers in the space, engaging with the speakers and their content passively. The same can also be said about audiences at a performance; the observers are passive and merely there to witness the unfolding of events. If any dialogue or reaction is to be had for either, it typically happens after the fact. Furthermore, real-world symposiums have the added challenge of participants having to navigate social etiquettes to introduce themselves to one another before such interactions are allowed to happen.

However in the case of this online symposium, the chat-box was in fact, very much alive. Participants were constantly discussing issues regarding both the performances, as well as the discussions held after. In a way, there were two layers of presence during the symposium. An active presence within the participant base where ideas were exchanged and discussed in real-time as they happened in the heat of the moment, as well as a passive presence where the classical behaviors of audience and performer were observed. This duality in experience can be likened to the collaborative co-creative art practice outlined by Roland Barthes in The Death of the Author. In it, he envisions the roles of the artist and viewer becoming one, a vision that transpires in the “third space” of social broadcasting. Audience members are discerning meaning, clarifying concepts and creating new interpretations, all the while the performances and presentations are happening in real-time. As Roy Ascott so famously put in his essay:

In telematic art, meaning is not created by the artist […] Meaning is the product of interaction between the observer and the system, the content of which is in a state of flux.

I had the opportunity to be present for both online performances that happened during the symposium. While each performance had their unique appeal, I would like to address some of the shared experiences both of these works had in relation to working within the third space.

The key challenge that both works had to address was the inherent instability of the network experience. While we have come quite far as a society with regard to networking technologies, the idea of having multiple videos streams being simultaneously hosted is still somewhat of a challenge. There is a great deal of variance in terms of getting all of this to work reliably, from the network stability of each individual participant, to the processing and then dissemination of the combined stream to all participants by Adobe Connect. The system is ultimately in control of all aspects of the performance and it is to its will that participants and performers must bend. The power to create, perform and observe is deferred to this system.

This “deferring of power”was seen across both performances when network issues caused performer to become out of sync with each other; particularly affecting Annie Abrahams’ Online En-semble – Entanglement Training work. The unexpected network challenges put the performers in a situation where they had to behave in an adaptive manner, making improvisational tweaks to account for instabilities in the network. This introduces an element of chance and spontaneity into the process of art-making that is otherwise not usually found in prepared performances. While staying to a script, the artists also had to account for the inherent dynamism and indeterminism of the stage upon which they were performing.

Inversely, in Jon Cates’ performance igaies, such intermittent disturbances to the planned performance were welcomed (and in fact encouraged). Much of the work was largely indeterminate in nature, and there appeared to be a sense of improvisation to how the artists used the physical space during the span of the work. The performance by XXXtraPrincess and their use of a social media platform meant that ultimately, there was no control as to how participants on the network would respond and behave on the feed. The viewers were free to hashtag anything they wished and also had the option to not directly participate with the work at all. It was also conceivable that the stream could have been cut-off at any moment should the owners of the social network deem their content inappropriate. This surrender of control to the system is something unique to telematic art and if difficult to recreate or experience outside of the third space place.

Ultimately, my experience with this symposium has lead me to the conclusion that finished or not, the third space provides us with an opportunity to reassess how we see ourselves as individuals in the networked space. The internet still holds the promise of being a revolution in the way we communicate; but it will be a matter of time before we are fully capable of understanding and navigating the societal nuances of this brave new world.

In the context of the symposium, I would argue that the internet and the network space is indeed a valid space for the creation, consumption and staging of art; participants and performers are in no way affected by the lack of a physical presence. In fact, the third space promises the opportunity to provide a much richer experience for both parties. Through a multi-faceted presentation system, there also exists the opportunity to create a vibrant temporal community around the work that seeks to both enrich and augment the experience in new and profound ways.

One thought on “Symposium Hyperessay: An Unfinished Communications Revolution”