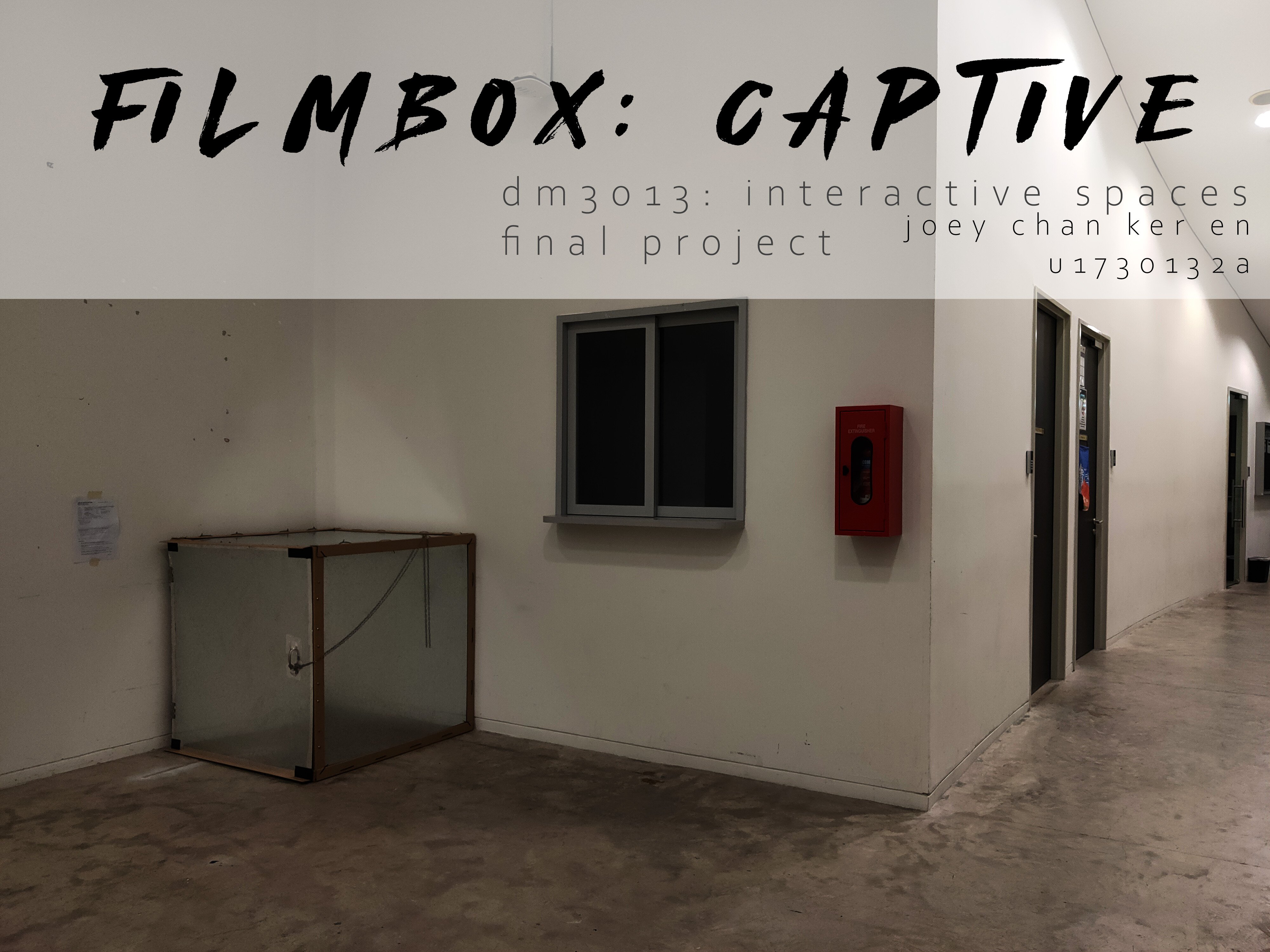 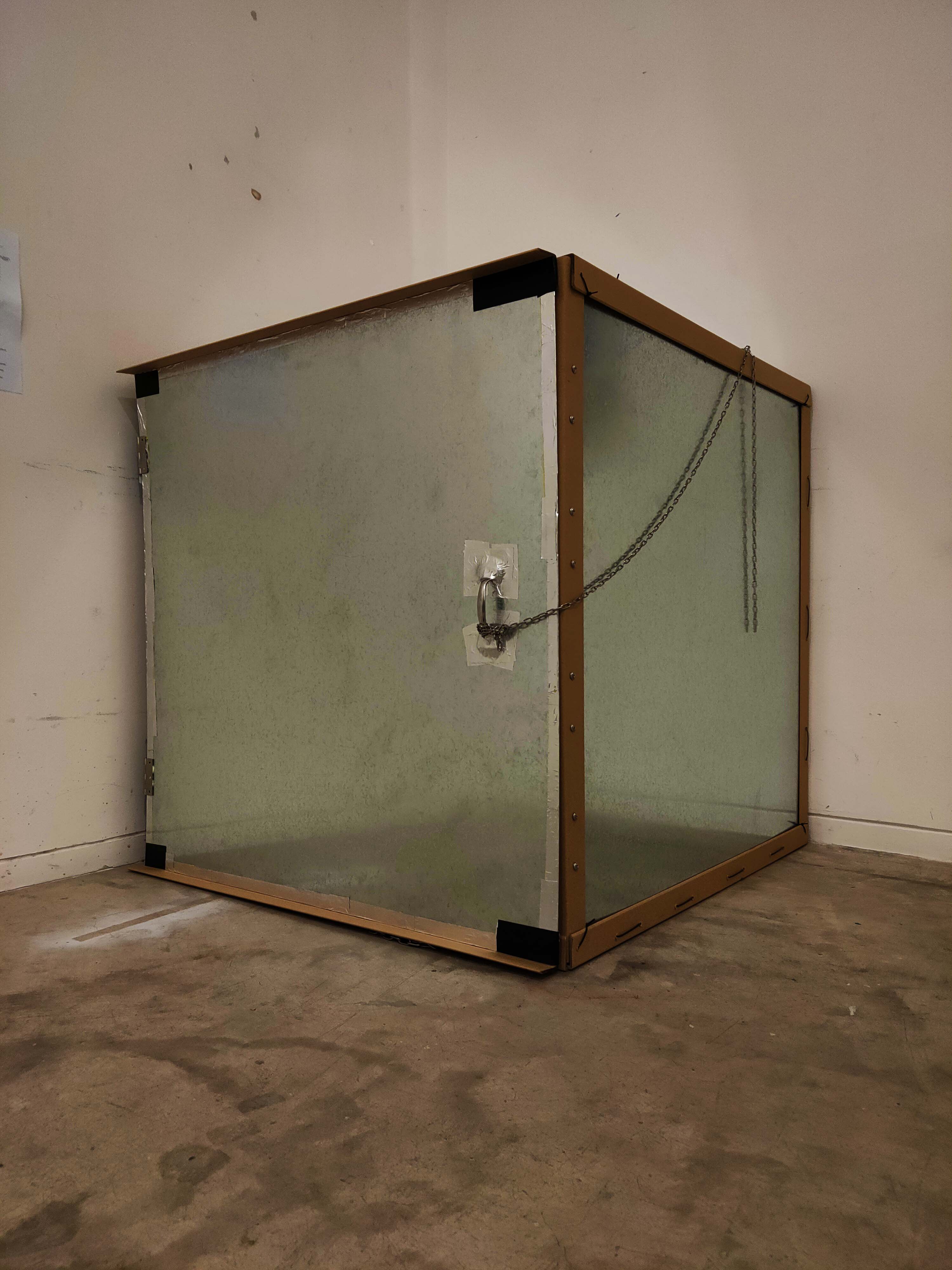 Filmbox: Captive has been an adventure for me, filled with both surprises and failures. It required a lot of hardware work, and the outcome is probably one of the most polished work I have done on a project.

Taking the idea of a box which looks just like any other box from the outside, but contains a pandora box’s worth of experiences inside, <Filmbox: Captive> is an installation piece dedicated to telling a Hypophonic narrative. It absorbs the audience into an environmental storytelling scenario, mastered with barely any sight, and mainly with sounds and touch.

<Filmbox: Captive> is a project focusing on the topic of pressure, a follow up from <Amigara Box>, a tunnel where one must traverse while blindfolded and being tangled up with spikes. Through a participant’s own actions and decisions, they will trigger follow-up actions that might cause discomfort and deny one the autonomy of expectations and reversal. The denial of freedom to regain comfort easily is my representation of pressure, especially in our pressure cooker society today.

Disclaimer: If you are afraid of bright lights, loud sounds and have claustrophobia, do not attempt. 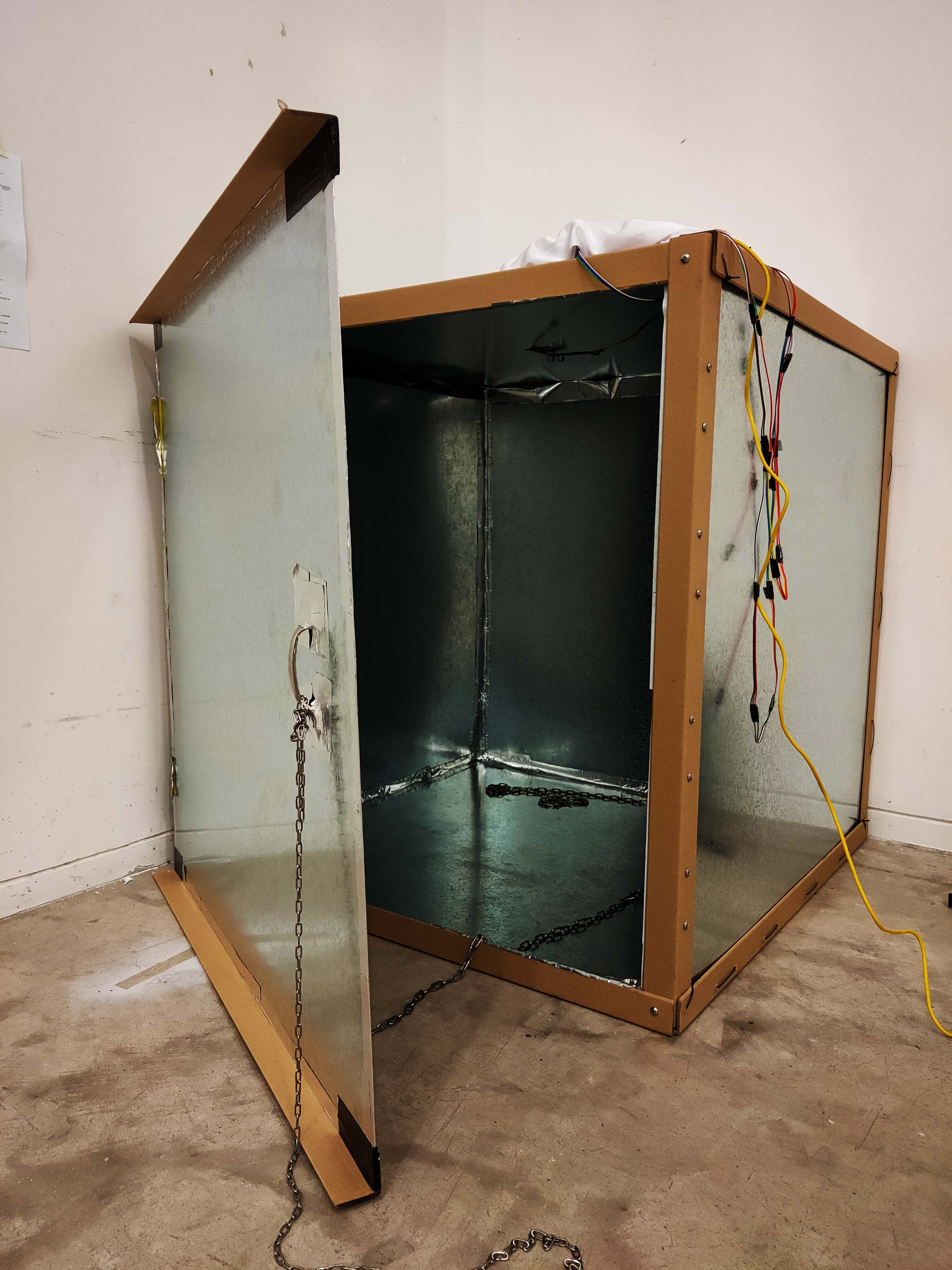 Filmbox was born from the idea of having numerous, identical looking cubes which produces a different narrative from each box, akin to a pandora’s box. In my project, which revolved around Pressure, I decided to do it based on “Captive”, where the participant will experience first hand the environment of someone who has been held captive and has no idea where they are.

Captive’s purpose is to trap the individual. They can barely see, and they cannot move their limbs. Any possible movements will set off a series of discomfort which they don’t know how to stop (intense flashing lights). The track also gets progressively disturbing, but they cannot remove it as well. This idea of taking away autonomy and possibilities is the pressure I am focusing on based on my prequel project, Amigara Box.

Captive is placed at a location resembling an alleyway. It takes its idea from murder victims being dumped in alleyways or dumpsters with no one to care about them until they start to rot and smell. It is a location where people will just walk past without thinking much about it. 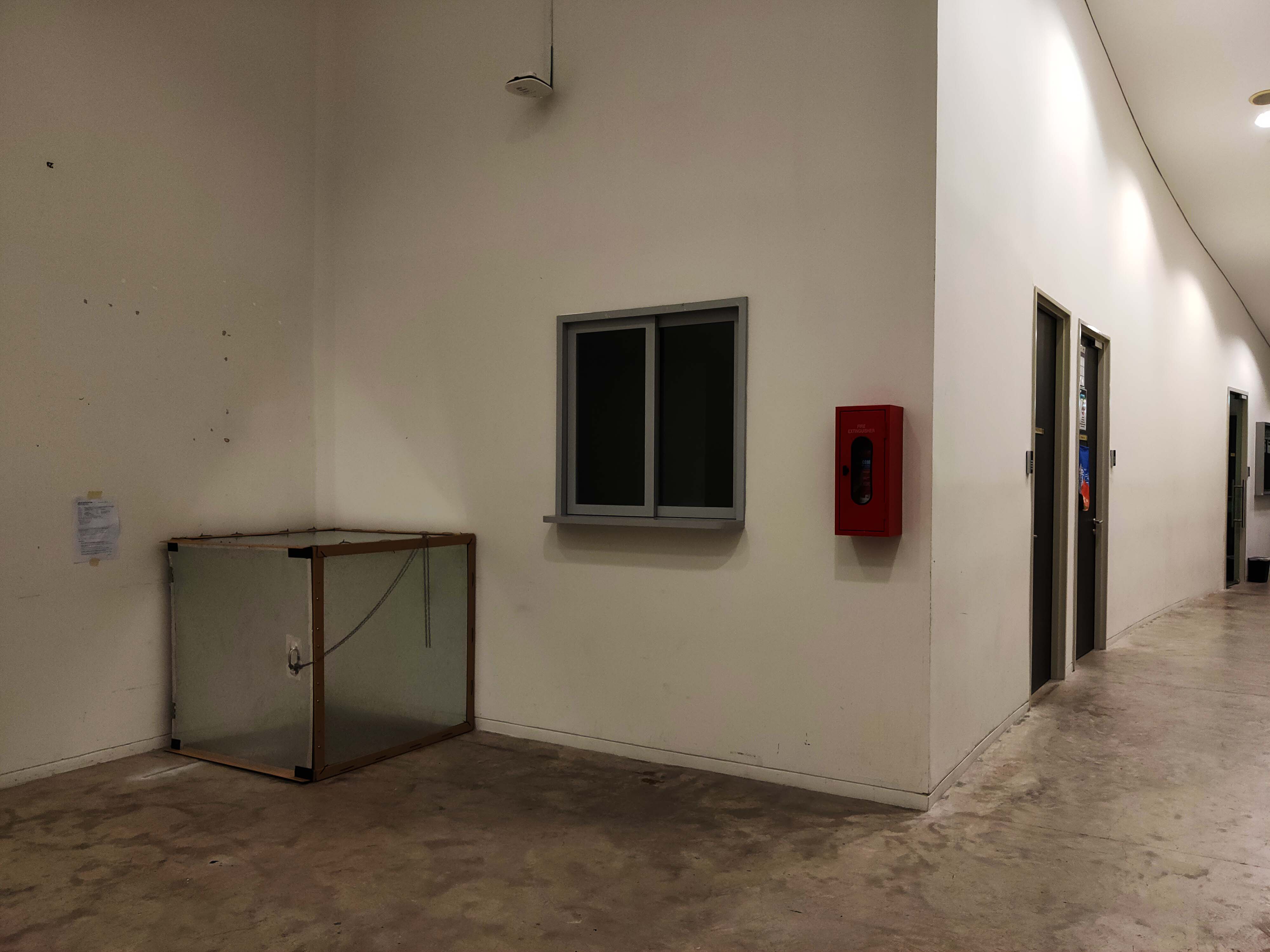 Through the 9 minute long experience, they are free to try to escape or figure out the narrative that is being played.

Each participant is given a pair of bluetooth headphones (supposedly noise cancellation but my newly bought Xiaomi ones apparently cheated my feelings) and will be chained up and padlocked around the ankles and wrists. 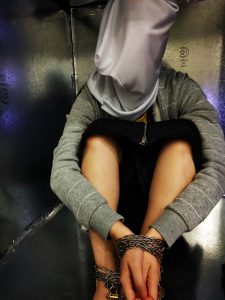 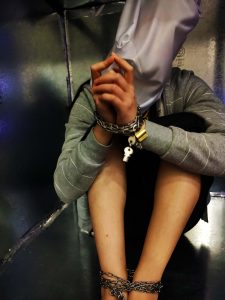 The participant is first covered with the white bag, before they are chained up and padlocked. The process is made to be loud, so that the participant is already immersed. I chose to have metal walls utilizing steel sheets which are -oof- really heavy. To make the box, I drilled them into very hard cardboard structures. 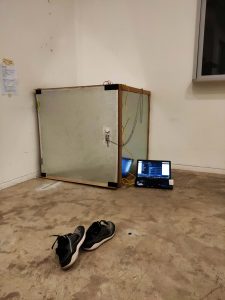 Biju in the box! 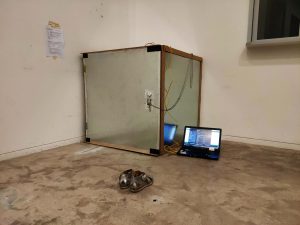 Kristy in the box!

The idea of using metal is because it is very cold and hard, which will make the participant feel that they are entrapped and cannot possibly crash out of the box even if they feel too uncomfortable. It adds on to the feeling of being trapped. I also used silver tape to secure the edges of the box to make it seem welded and hence adding onto the  feeling of impossibility of escaping. 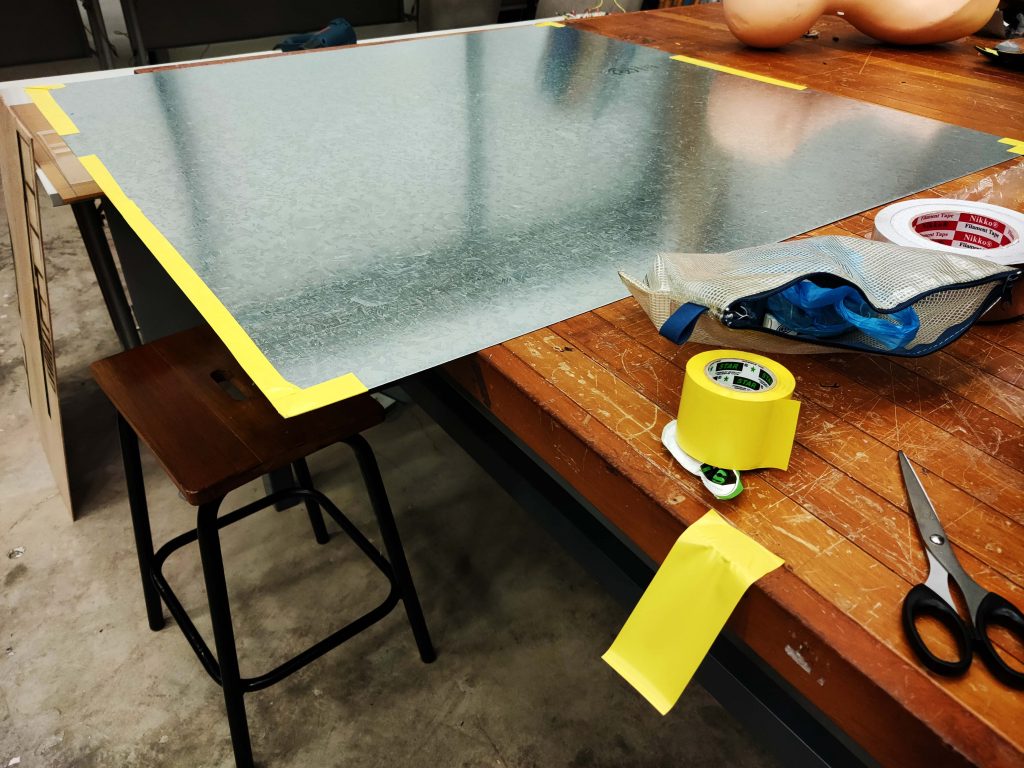 Taping the edges because man they are sharrrrrp. 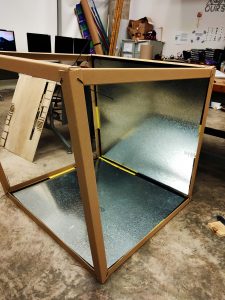 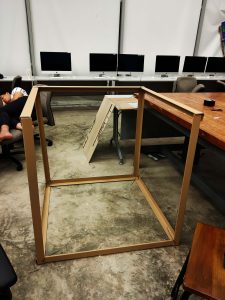 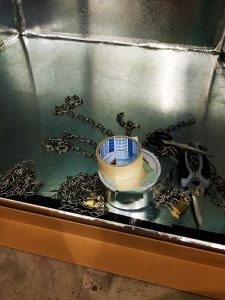 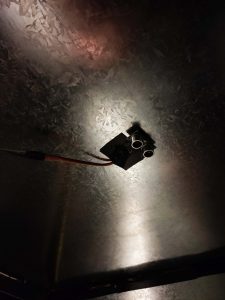 A narrative track is then played, which is actually a holophonic environmental track which lures the participant into the environment it emulates. I mixed the track with consideration of timing, direction and distance, which creates a more immersive experience. 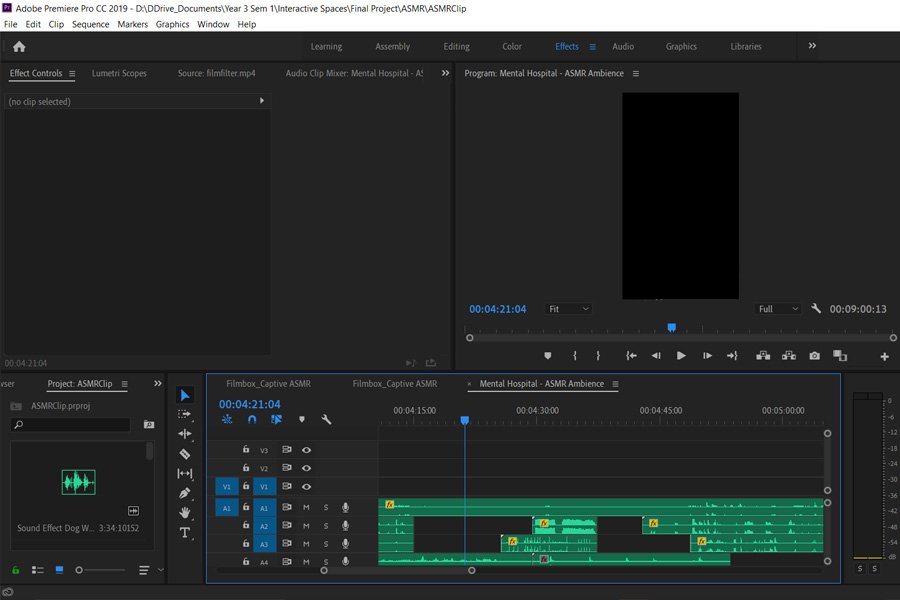 The tracks are all clipped from non-copyright sounds as well as my own voice.

A white cloth bag is also dumped over their head, with LED lights attached to it. This is linked to an ultrasonic sensor, which will set off rapidly flashing lights right in the participant’s peripheral once the sensor detects movement from the participant. This is very disorienting, and being the supposed sadist I am, I decided to add this element into the experience. 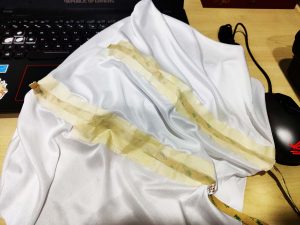 My initial plan was to lace the box with LED lights instead which would make the experience more handsfree, but my wires screwed up hours before presentation. Hence, I decided to make a bag instead and do away with my initial idea of having a blindfold that is not very secure. 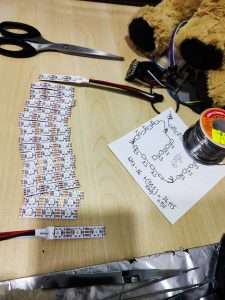 I did this for nothing…

I was unable to man the space constantly during Showcase Day, so I went home the previous night and modified the code a bit. I removed the LED mask, and replaced it with an LED strip at the entrance of the cage door. I left the cage door slightly ajar, and the constantly blinking LED Strip would make it seem like there was activity in the box. (You can see this from the trailer). 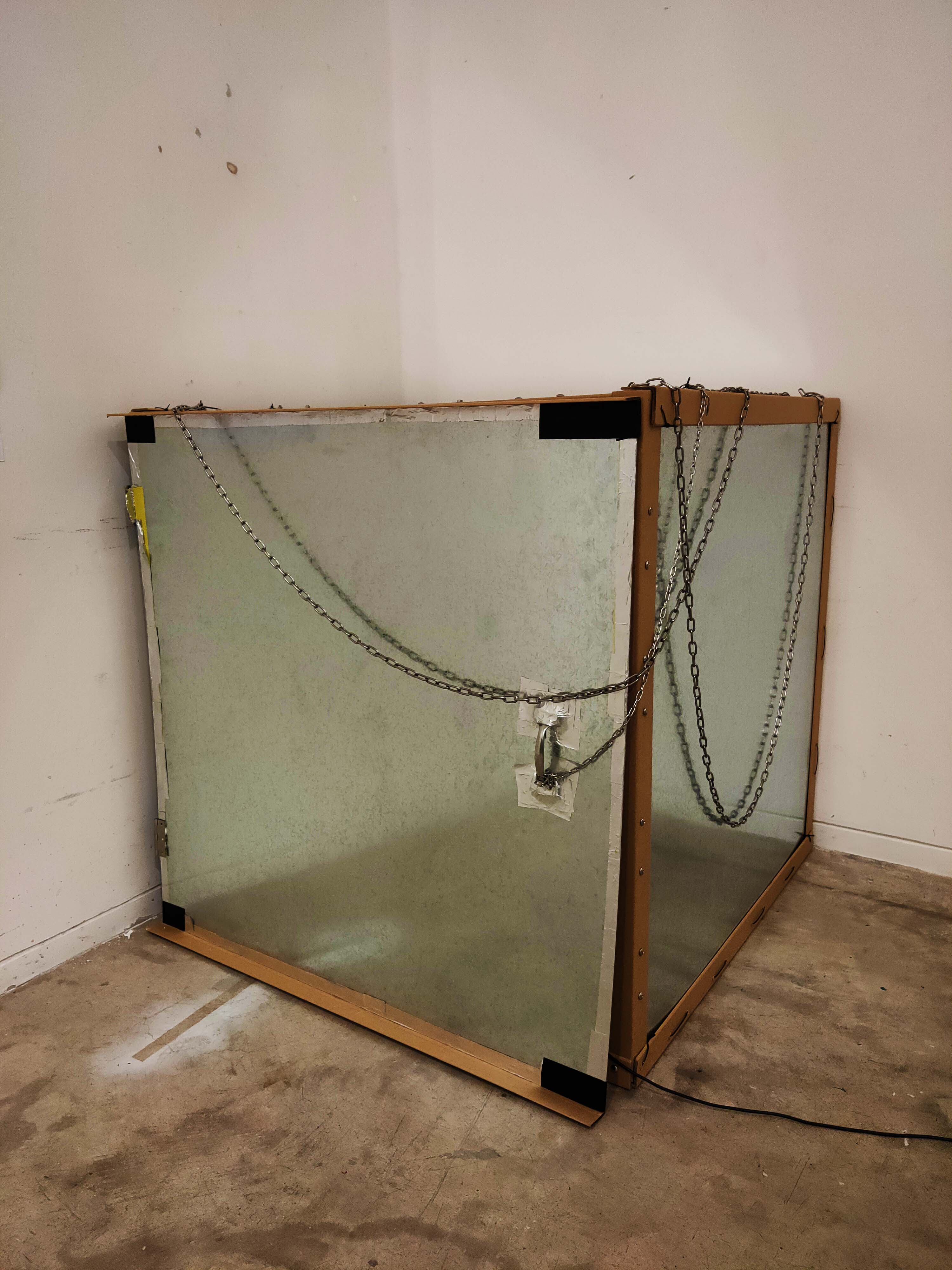 I also added multiple chains around the cage to “lock it up”, and left my speaker inside the cage to play the narrative. In this way, anyone walking past will hear the morbid crying sounds etc and it creates a holophonic experience for passerby instead. It becomes a “what is going on in that box, who is in there? what is going on” kind of horror jumpscare preview instead of a “go in and scream the heck out of everything help I cannot escape” experience.

Apparently, I scared a few teachers whose offices were round the corner… They thought someone was inside crying about being unable to finish their finals…. 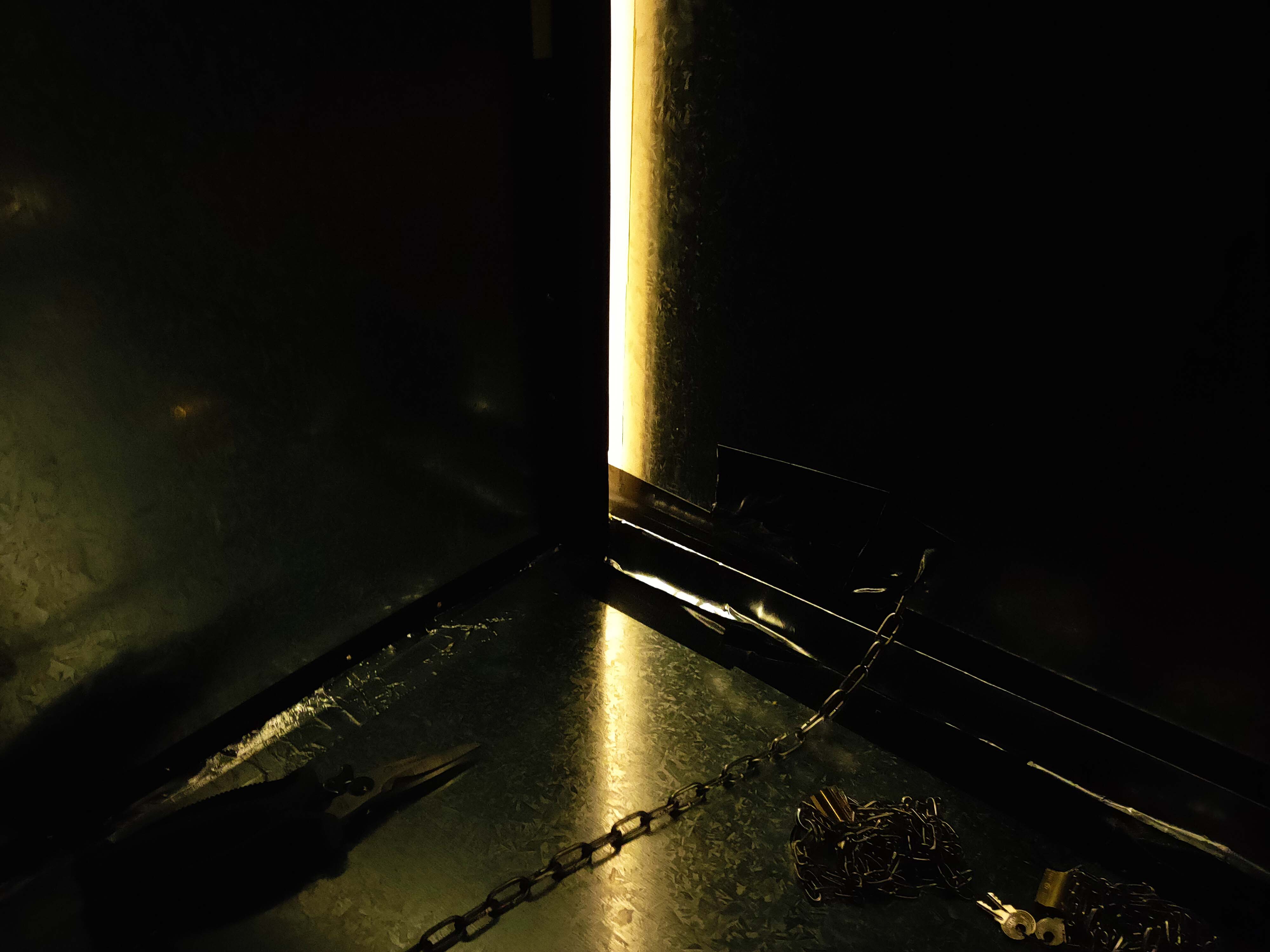 The feedback for this project was about how the dragging of the chains I made when I locked the box up and how I locked the participant’s sensory perceptions up was good in scaring them a little. The cold metal touch and the heavy walls were also great. However, the soundtrack could have been less noisy (more intermittent silences) and could have utilized more environmental sounds rather than man-made sounds. Something like wind gushing and stuff… And also using an unknown language to converse in the soundtrack, kind of like Russian maybe? I have overall learnt a lot from this project, and would definitely take these into conceptualization in further projects.

Thank you to everyone who made this project possible 😀