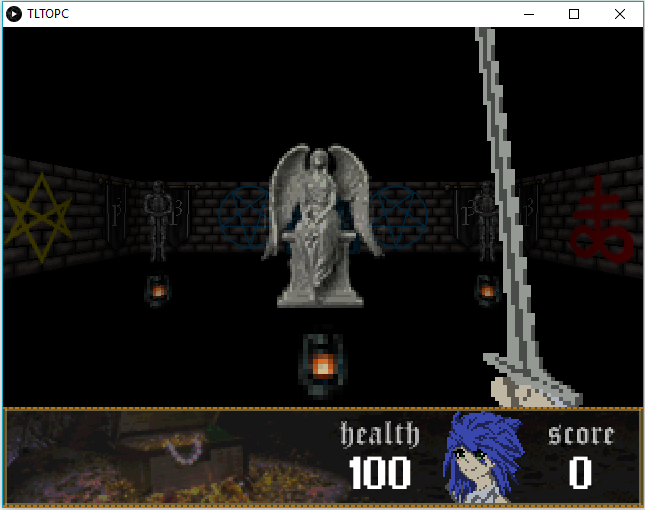 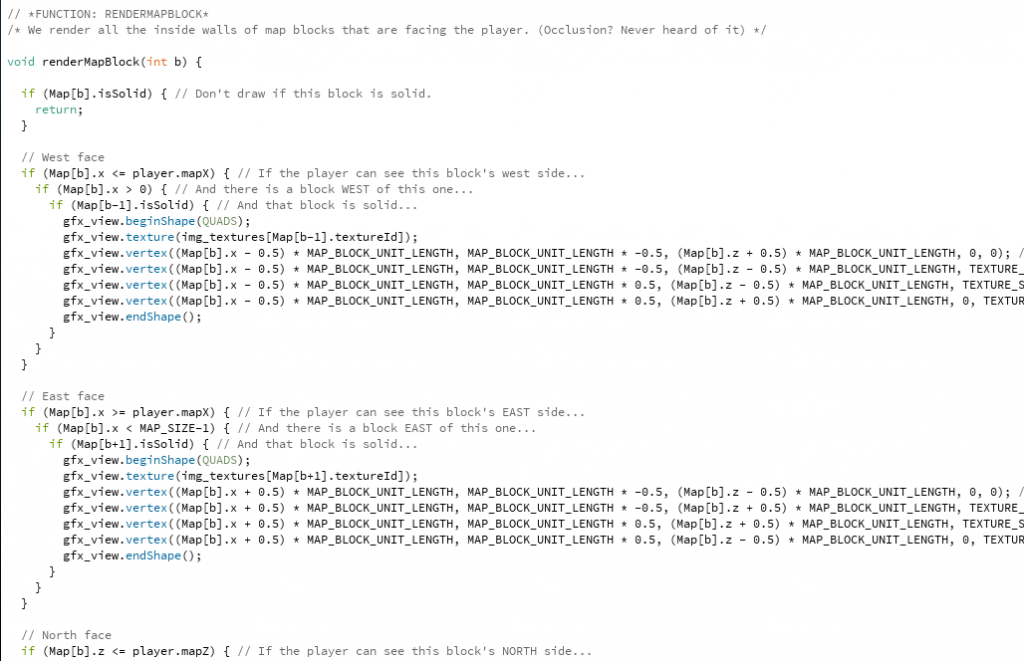 Hi, I’m Kee Yong and I was the principal coder for The Lost Treasure of Processing Castle. While I did some of the texture work, the majority of my time was spent implementing our ideas and — for lack of a better term — making stuff work.

The final code is 2282 lines long (about half of which is comments).

In TLTOPC the map is a 64×64 grid of tiles, which are called MapBlocks. Each of these tiles has various pieces of information associated with it, such as whether it’s solid or not, what texture it has, and whether it’s opened by a key.

Everything in the game world that isn’t a MapBlock is an Entity. This includes the player, enemies, items, scenery objects, and so on. Entities have their own properties, such as their coordinates in the game world and what their collision radius is.

The TLTOPC Level Editor was made to keep track of this data and present it in a human-readable format. It allows the player to edit the placement and properties of MapBlocks and Entities. Once the save button is pressed, the map data is stored in an XML file (which, thankfully, Processing has built-in support to read and write). The XML file can then be sent to the game proper, where it’s used to initialize the level as it loads.

When we began this project we thought we would have to write the 3D renderer ourselves. Thankfully, Processing comes pre-packaged with an OpenGL 3D renderer, which we used in TLTOPC. All the images seen in the game are drawn using OpenGL.

That said, OpenGL comes with a bunch of problems:

This assumption might not seem like a big deal (as you can just render geometry with the appropriate texture) but it caused unwanted behavior with transparent textures. You see, OpenGL’s default depth test behavior causes every texture to occlude the geometry behind it, regardless of whether that part of the texture is actually opaque or transparent. This meant that every skeleton and candelabra in the game had an invisible box around it that was blocking vision of things behind it.
To solve this bug, I had to throw out OpenGL’s depth test and make the game manually sort the MapBlocks and Entities in the game by distance from the player, then draw them back-to-front.

This issue is actually relatively easy to solve in OpenGL, as the fix is to change a single setting in the code (switching the texture smoothing system to be nearest neighbor instead of trilinear). However, Processing’s OpenGL API doesn’t actually expose this setting. To get the pixelated effect we wanted, I had to dig into the back end of Processing and use an undocumented function to interact with the P3D renderer’s rendering settings.

With the OpenGL hacking out of the way, the actual rendering logic used in-game is fairly straightforward.

It wasn’t actually easy to implement because of all the math involved (who even remembers their trigonometry from secondary school?) but the results speak for themselves.

The physics implementation in the game is largely inspired by the Marathon series of games, created by Bungie Software (which are nowadays better known as the creators of Halo and Destiny). I played the Marathon games a lot as a kid, and TLTOPC is at its heart a 90s first-person shooter, so I used the way that Marathon‘s physics works as reference for TLTOPC.

In Marathon and many 90s first-person shooters:

All of these were translated into TLTOPC:

The player’s light attack, created by tapping the attack button, is treated as a giant invisible Entity that moves in front of the player and collides with enemies to damage them. The player’s charged dash attack temporarily turns the player immune to damage, pushes the player forward, and causes the player to deal damage to enemies and knock them away on contact.

TLTOPC uses the A* search algorithm for enemy pathfinding. This is a logic-based algorithm, commonly used in games, for finding the shortest route from one point in a network to another. How it works is essentially:

To facilitate A* pathfinding, TLTOPC goes through all the MapBlocks at the start and attaches to each MapBlock a list of adjacent MapBlocks. This creates what I call a pathfinding mesh, an interconnected map of nodes, so that the pathfinding function can refer to it while it’s doing its thing instead of having to manually calculate the adjacent MapBlocks over and over.

The technical term for the “guessing” in step 2 is a heuristic, which is a method by which the algorithm determines which direction is the best. As TLTOPC takes place on a 2D grid of tiles, its heuristic is essentially “try walking in a straight line to the target.” This makes the algorithm take longer in maze-like scenarios but in general be quite efficient.

As for TLTOPC‘s AI, it’s really nothing to write home about. Skeleton enemies have an “aggro radius”; if the player comes within this distance of the enemy, they will activate and start chasing the player. They’ll pathfind to the player’s MapBlock if they aren’t already in it. Otherwise, they’ll move in the direction of the player and just try to mosh the player to death.

I wrote the game’s music one night when I couldn’t sleep. The track (titled “The Lost Treasure of Processing Castle,” because I’m original) was made in LMMS with freely available synth instruments. The track is performed by a lute (medieval guitar), a drum, a tambourine, a flute, and a choir — all rendered in glorious 16-bit MIDI.

The music itself is both melodic and rhythmic, inspired by Baroque compositions as well as the soundtracks of Doom, Wolfenstein 3D, Marathon, Half-Life, and other 90s first-person shooters. It’s meant to be atmospheric and mysterious, with a driving beat pushing the player onward. 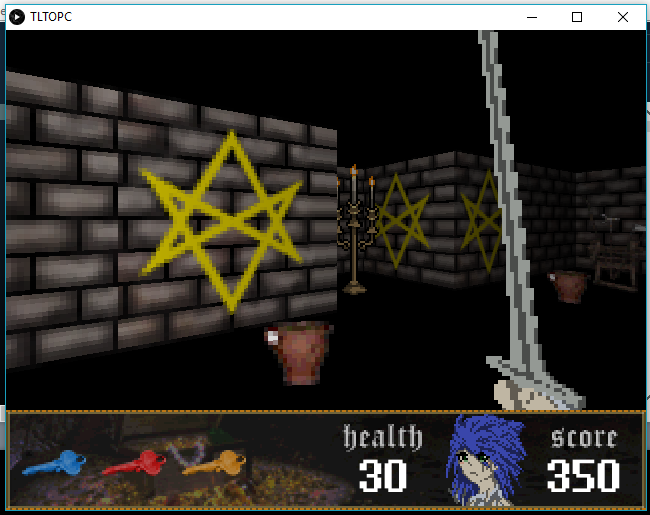 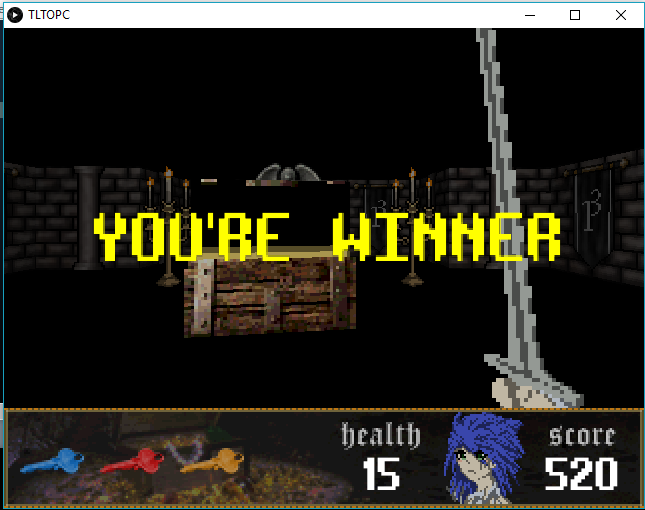 TLTOPC was a very fun project to work on that put my programming and software engineering skills to the test. After having worked on TLTOPC, I can say that I’m much more confident in my coding skills, and am better prepared to deal with the (infinitely more complex) code and script systems of commercially produced games.

There are many things I couldn’t implement in the project due to time constraints, including:

I look forward to working on more ambitious games and interactive media projects in the future!