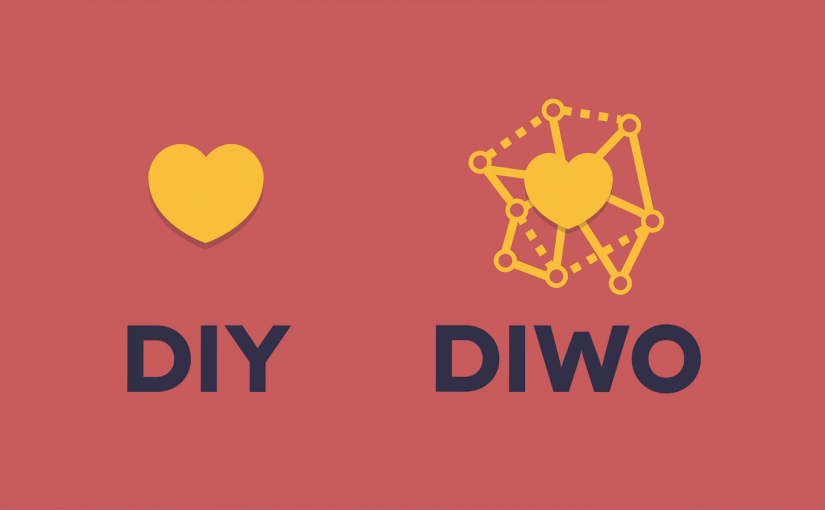 DIWO, or Do-It-With-Others, refers to a culture of collaborative creation. It’s about making things with other people. In opposition to DIY culture, where you make something by yourself, or market-driven capitalism, where you buy something someone else made, DIWO is made by the community for the community.

In his article DIWO (Do-It-With-Others): Artistic Co-Creation as a Decentralized Method of Peer Empowerment in Today’s Multitude, curator Marc Garrett draws comparisons between DIWO culture and indie music culture. Much like independent music, DIWO is a reaction to what makers perceive as an increasingly corporate mainstream culture. In DIWO, artists find the freedom to express thoughts and concepts that they wouldn’t have the chance to express in a mainstream setting.

We all essentially live in the stomach of the ‘entertainment’ dragon. As a result, it would be near impossible to generate an avant-garde strategy in a world that feels increasingly like an outdoor shopping mall, what I call a scripted space.

Free from the requirements of publishers or manufacturers, makers in the DIWO culture don’t need to consider factors such as the profitability or mass appeal of their work. This opens up a more diverse range of subject matter that they can tackle, leading to greater artistic freedom.

DIWO’s popularity has been boosted by the technological advancements of the past decade, which have made it even easier to collaborate with others. Cloud storage services such as Google Drive and GitHub are now ubiquitous and widely used. Furthermore, online communities and social media make it easy to find others with similar interests and to collaborate on projects.

Another collaborative success story is Dota 2, which began as a user-created modification of Warcraft III: Reign of Chaos. Defense of the Ancients, as it was known, was a grassroots collaborative project designed and maintained by fans of Warcraft. This fan-created spinoff became even more popular than the game that it had been modified from, leading Gamasutra to declare it “the most popular and most-discussed free, non-supported game mod in the world.”

As the Internet and the real world become increasingly intertwined, the tools of collaborative creation will only continue to empower makers and artists. Though it may not seem like it, our Instagram art swaps and Google Drive discussions are shaping the future. That’s what DIWO means — to do it with others!