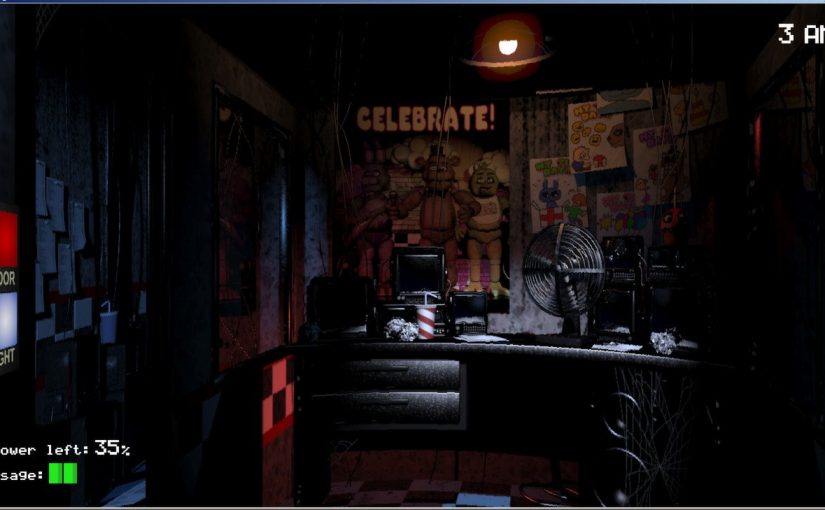 For my inspirational interactive artwork, I’d like to talk about Five Nights at Freddy’s, one of the most famous horror games on the Internet.

Shortly after its release in 2014, FNaF went viral on social media and was widely acclaimed by video game reviewers for its terrifying atmosphere. Even though the game was created by only one person — and had limited graphics and an antiquated control scheme — it somehow created a memorable experience that kept players on the edge of their seat.

To explain FNaF‘s success, we can look to the theory of player agency in games. Agency refers to the amount of control that players have over the game world. For example, in the Halo series, the player is a capable soldier who can defeat legions of bad guys and win battles to turn the tide of the war. This is an example of high agency.

In contrast, horror games are defined by the main character’s lack of agency. For example, in the Silent Hill series, the player’s vision is obscured by dense fog, the player character cannot run very fast, and enemies are extremely deadly and appear with no warning. This contributes to a feeling of helplessness and fear, which is the core of the horror genre.

FNaF is horrifying because the player has almost no agency. It is a game which prevents the player character from even moving around their office, let alone fighting back against the monsters that stalk the building. In order to survive the night, the player can only rely on sounds, movements, and changes in the security camera footage. This creates an intense atmosphere of suspense, dread, and yes — helplessness and fear.

FNaF is also terrifying because of the many surprises inherent in the gameplay. Horror films and horror games often uses sudden, shocking, and disturbing images to scare the player; these are referred to as jumpscares. FNaF is so good at producing jump scares that it can be described as a highly efficient jumpscare delivery system.

The secret to FNaF‘s terror is that the player is forced to seek out the monsters in order to win the game. To survive, the player must constantly be on watch for images, sounds, and other hints that betray the monsters’ presence. This means that they are encouraged to toggle constantly between different security cameras, as well as between the security camera monitor and the office space — creating numerous avenues for jumpscares to appear and shock the player. Every single glimpse of a monster is a jumpscare, and that is part of the terrifying magic of the game.

I believe FNaF is inspiring to interactive artists and game developers because of the incredible viewer engagement that it fosters. Through mastering the principles of agency and surprise, the solo developer of FNaF has created an oppressive, horrifying atmosphere with an incredibly simple game — a game that is little more than a series of still pictures and a timer that slowly runs out. It is an experience that immediately grips the player and leaves its mark long after the end of the game has been reached. In my opinion, this is the best result that any interactive artist can hope to accomplish.