I think we all know who Sherlock Holmes is. He’s the greatest fictional detective character (other than Detective Conan) based on the works of Sir Arthur Conan Doyle. And if you watch the TV Series, Sherlock, surely you agree that the character of Sherlock Holmes portrayed in that series is interesting. He’s a natural-born genius, which is why he looks down to other people even though he never meant it to be offensive. Also, he has eccentric habits that make it hard for others to keep up with him — which is why he has almost zero friends. Sherlock might seem selfish, although he’s actually just doing things in the most effective way. He even referred himself as a “highly functioning sociopath.” He doesn’t really care how others judge him, he just does what is right for him.

Damian is a character from DC universe, also known as the fourth Robin. What makes him different from all the previous robins is that he is blood-related to Bruce Wayne, the Batman himself. He is the son of Bruce and Talia, the daughter of Batman’s archenemy. He was trained to be an assassin by his mother since he was born, which explains his merciless personality. And for a 10 years old kid, he has exceptional skills in martial arts, painting (yes, painting), and even in business management. This causes him to have an over-confident personality and self-righteous. He also has high standards for everything which makes him so hard to please. He tends to look down to other people even though physically he’s the shortest robin to debut in the history LMAO. However, since he wanted to become a hero, he tried so hard to reject his killing instincts, which shows that he’s a determined character. And even though he doesn’t show it, he actually cares for his family. Though love amirite?

Yes, another main character from another famous tv series, Supernatural. Castiel is an angel of the Lord that betrayed heaven for the safety of humanity. He’s an interesting character because of how he spent most of his time in the human world, despite the entity he is. He’s a faithful angel that believes God will always help those who in need. He’s also an obedient angel. However, he would neglect all his responsibilities in order to help others. Castiel is charismatic and skillful in supernatural combats. But, he’s super awkward in socializing and interacting with humans. He deeply cares for Sam and Dean (the two human main character) who he refers as his friends and he is willing to die for them, even though they’re just humans.

4. Harrison Wells from The Flash

He’s the (spoiler alert) antagonist in the tv series, The Flash, mainly in the first season. What got me really attracted to this particular character is how easy for him to lie and kill others so he could achieve his objective. He seemed like a nice person who helps others and a responsible character since most of the problems in this series are mainly caused by an accident from his experiment. But, what’s interesting is that he intentionally create that accident. And not just that, he played the victim, such as become paralyzed because of the accident. Well, obviously he lied, he could actually walk, even run since he is the Reverse Flash. He’s a really ambitious character. It is proved in one episode when he killed one of his worker, Cisco, that has been helping him this whole time and he himself said that Cisco is like a son for him, because Cisco found out about his real intentions. Man, he’s a dark character, yet I love him so much.

5. Barney Stinson from How I Met Your Mother

Who doesn’t even know him? He’s the meme in the world of tv series. Barney is a chill, relaxed character, yet ambitious at the same time. He’s the perfect characterization of the quote “YOLO”. He tries to enjoy his life to the fullest, so he won’t regret anything. He wanted every day of his life to be “legendary” (which doesn’t make any sense). He always tries to get girls, but he doesn’t want commitment. Which is why he tried to get laid by different chicks every single time. But, he’s actually afraid of commitments because of his childhood trauma of not having a father. And he treated women badly because he didn’t have a clear picture of how a man should treat a woman. He’s actually very lonely because of his eccentric character, which is why he really cares about his current 4 friends and will do anything for them.

The most iconic president in the U.S history ever. He’s really inspiring to everyone. The first black president in the U.S history. He proves that black people are the same as others, they should not be treated as a trash of society just because of their skin color. He also legalizes same-sex marriage, even though he knew lots of people will attack him for this. Yet, he still fights for what he believe was right. Once you go Barrack, you’ll never go back. #RESPECT

She’s.. she’s one hell of a character. True inspiration. She’s a determined person, considering she didn’t give up when her novel was rejected lots of times. Now, she’s rich and yet, she stays humble. She gave most of her fortune to the charity and lost her millionaire status. And man, she’s sassy as heck. She always gave the best response to her haters, especially on twitter. She’s super good with words so you better not messing up with her cause she’ll roast you and believe me, she has no mercy for her enemies. Amazing.

HAHAHAH YOU THINK I’M JOKING, WELL I’M NOT. We were required to choose a character that triggers special feelings in us, right? Well, Trump does. I DESPISE HIM WAY TOO MUCH LMAO. He might be a determined person but he’s inconsiderate. He’s just that person that no matter how much he did good, you’ll still hate him. He’s arrogant and relies on his fortune way too much. No trace of humility can be found. Wow. To think such creature exist. Just, no.

People That I Know

My mom will always be my inspiration. She came from a poor family and she’s the youngest daughter, yet she went far away from her city by herself when she was 15 years old, to study and to succeed in life. She faces many hardships, but she has God with her. She doesn’t easily give up and she’s faithful to God, which is why she could stay strong at that time.

Well, her name is classified because I don’t want her to find out that I’m writing about her LOL. She’s a stubborn person and a bit selfish. Actually, she’s super nice and caring. Most of her bad attitude are just.. you know, her. She never intentionally hurt people. However, she could be really aggressive when she’s defending herself. She’s loud which sometimes annoying but her voice will always be missed. Once she cares about someone, she will care about them as if they’re her own child (wow).

This is not the real pic of Jesus, but you get what I mean. And yes, I put Him in the “People I Know” section because why not. He’s the only human that is sinless. How cool is that? And He could do miracles, yet He’s super humble. He cares about you and me, which is why He died on the cross for us. He’s loving and loyal. Omniscient and omnipotent. JUST WOW. Y’all should get to know Him better cause life sure is better when we try to get to know Him. #PREACH

In the end, I choose Sherlock Holmes because I think it would be fun to use a character that is not too heroic. In this project, I did not try to create a reenactment of Sherlock. I took some aspects of his personality and give it to this whole new character which is a university student. Here’s the breakdown of the character Sherlock. 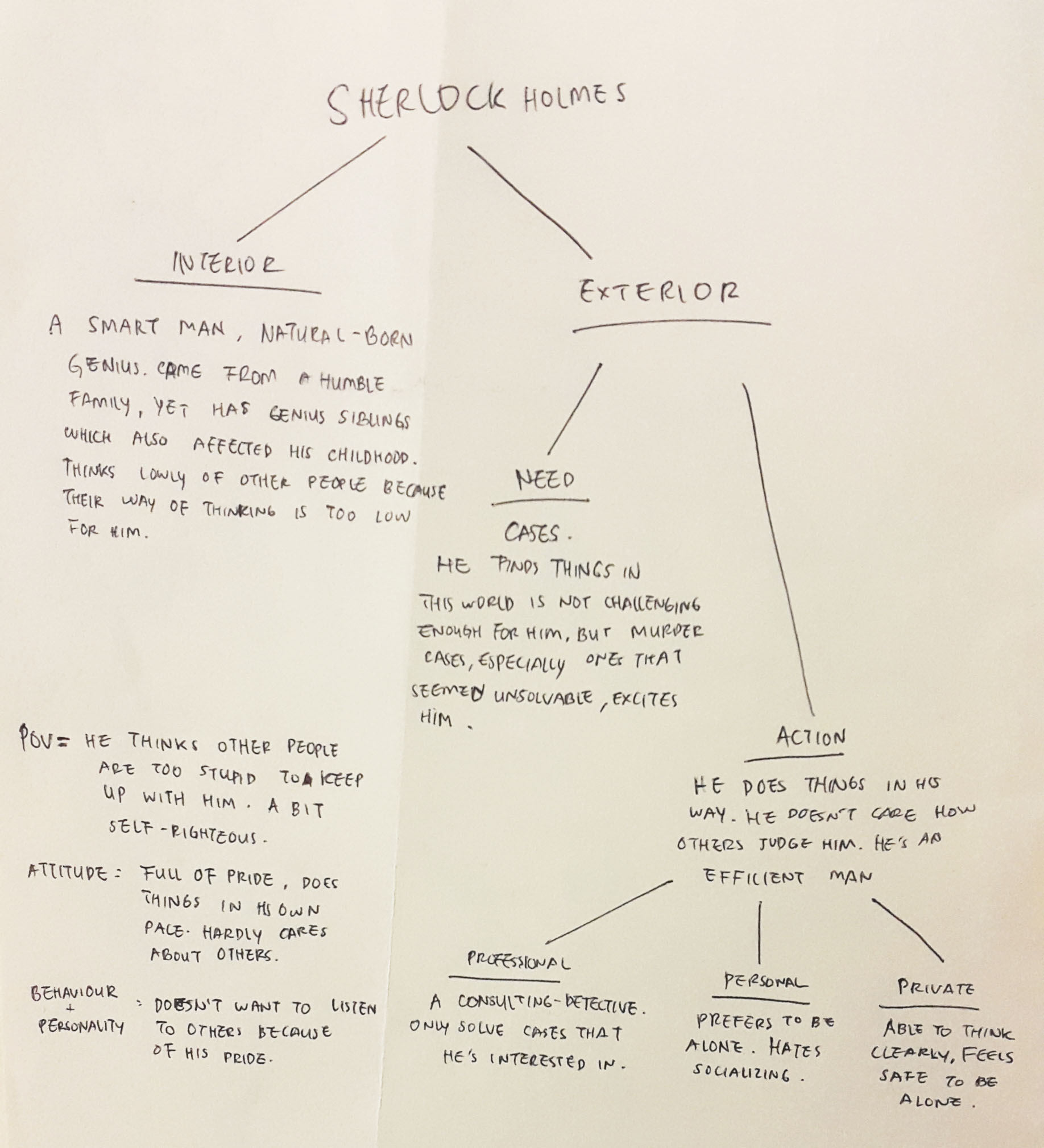 Main points of the character that I want to show in this short video is that:

And so, I wanted to give a different environment from the original tv series, which is the urban life in London. Also, it involves real life problems such as murders, crimes, etc. Hence, I think school life is pretty far from this since the only problem of students is their studies. So, I came up with the idea of a girl that is smart, she knows it, and can’t help herself to prove it to other people. Here’s the storyboard. 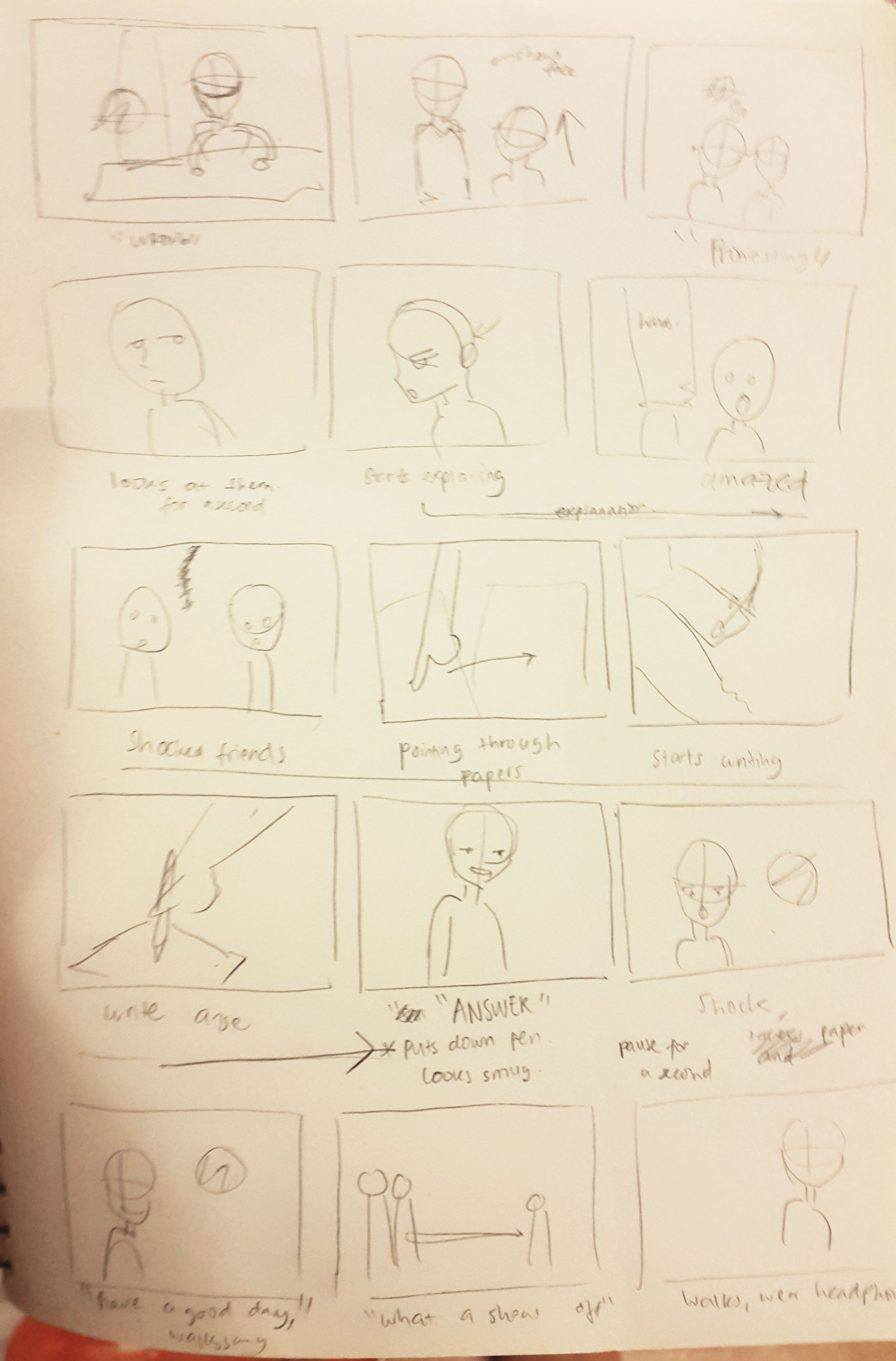 Sorry for the blur.

And here’s the dialogue (it’s mostly in Indonesian, sorry!). 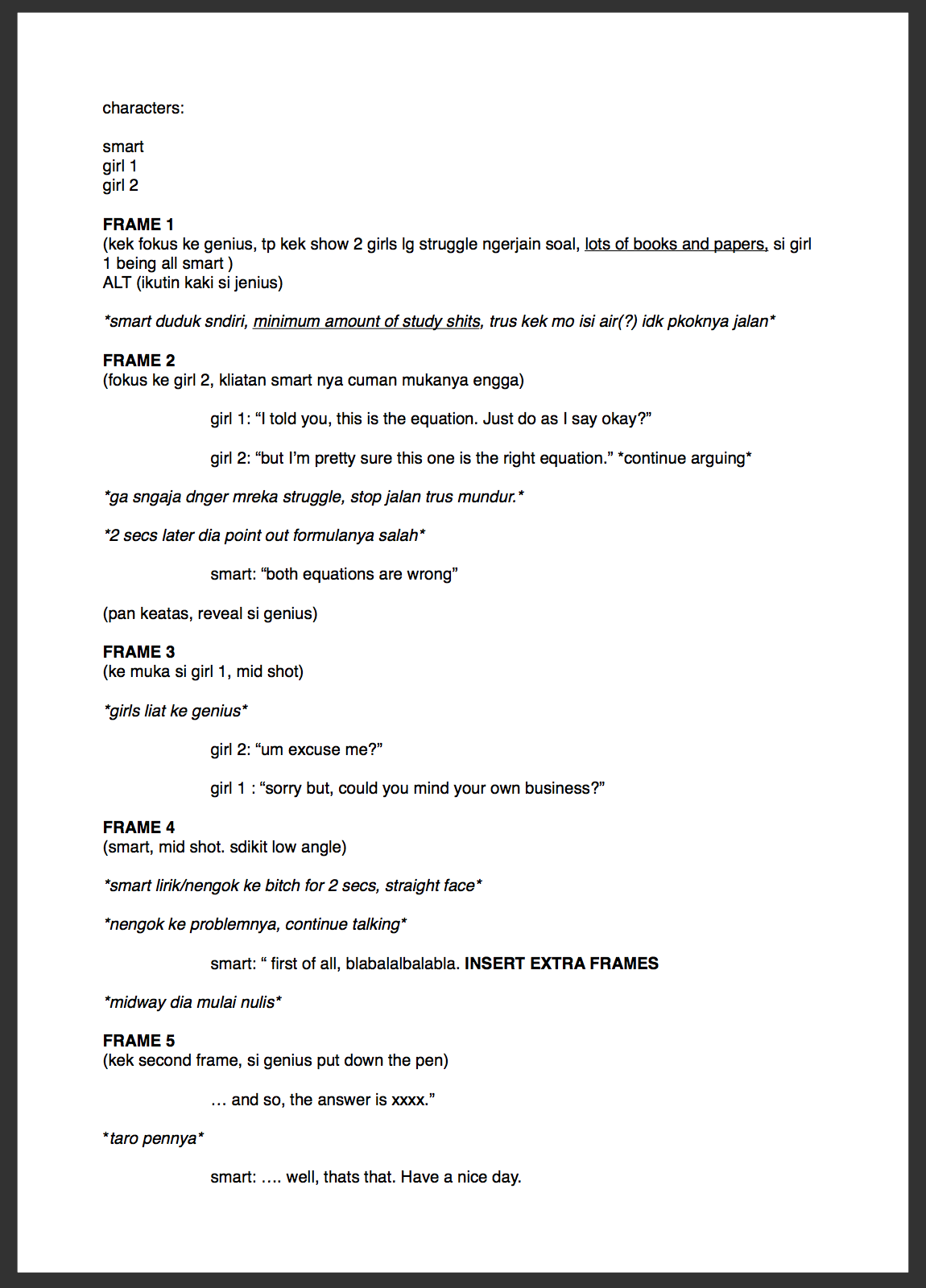 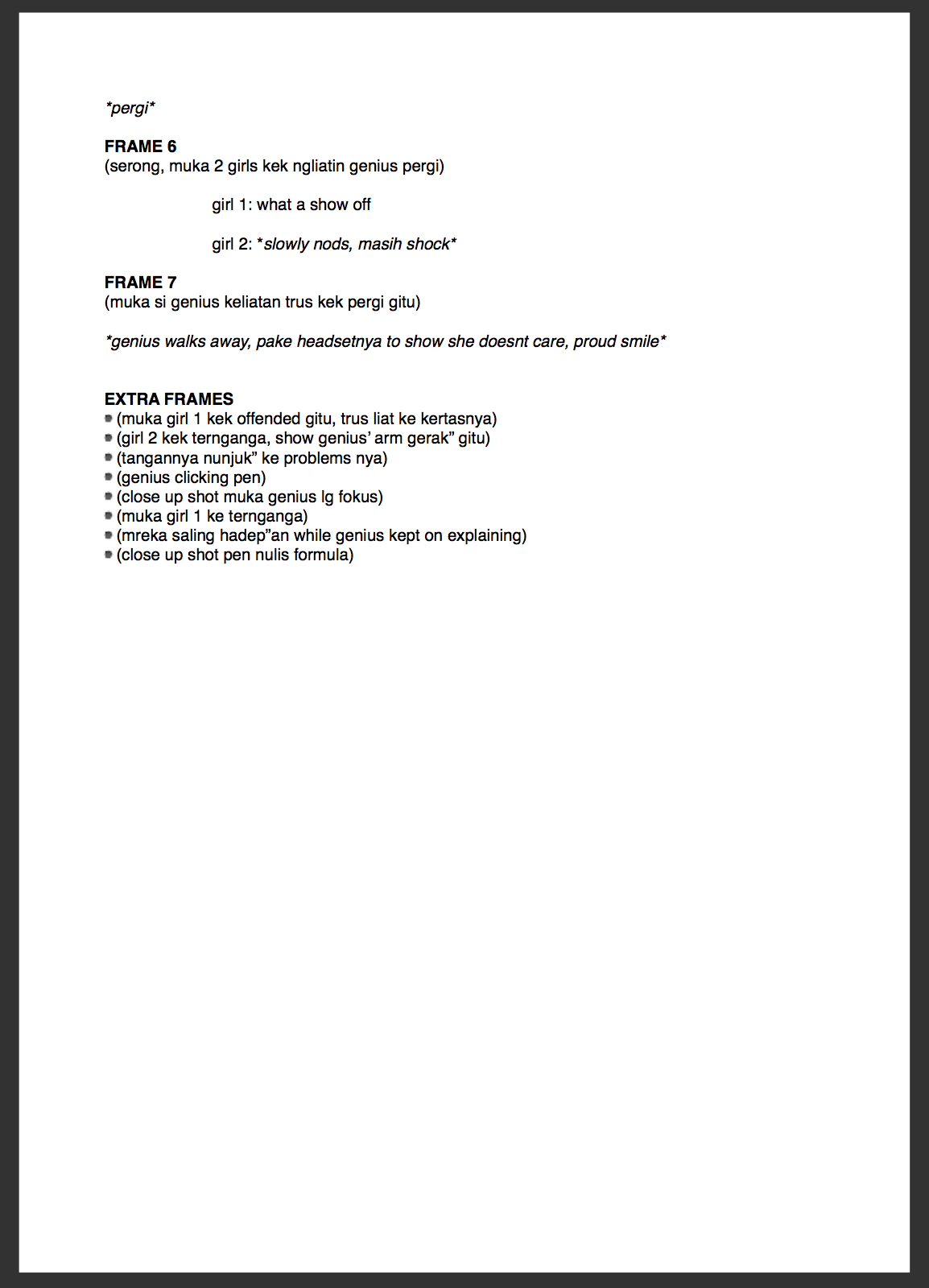 I filmed it on one of the benches in NTU with my roomie and my 2 friends. I had so much fun for this project. Well, stressed also. But this project pushed me to become more independent and to try new things!