To design a 30 seconds cacophony of sounds/soundscape against a single image or text or even both of your choice.

“With the advancement of online shopping, people’s lives are becoming much easier as they are able to get whatever they want from various choices online. This had definitely increased the level of convenience to a large extent. However, this also reduced the chances for them to contact with the real world. Especially when they can fulfill all of their requirements through online shopping.”

——Intro of one of my secondary school essay

For the past few years when I opened my own online bank account, I started shopping online for everything, as long as I can wait for it to come. Furthermore, nowadays we can even receive it on the same day of purchasing if the seller is in the same city, which we can select before buying. The more time I spent on it, the more I felt addicted to it.

The idea for this project came about when I received my air express package from Taobao. When I collected them back to my hall and placed them in front of me, I suddenly realized that I’ve bought too much, in fact, I’ve always been buying too much.

So I decided to take a photo of the recent packages I received (there are more on the way). And add some drawing of hands to emphasize the idea of something is hiding there. Something, what thing? Well, it can be the uncontrolled desire to buy more and more online, or those who want to escape from reality to the virtual world, or the attraction for people to be addicted, or just something unknown. And I use hands to symbolize that as we do most of our actions using hands.

The hands are coming out from all the gaps and corners between the package, stretching and fondling, which shows that they are attached with the packages. Most of them are only showing their fingers as they are still hiding, from which I believed is the reality, where is full of communication and trouble. Also, I purposely drew them with thick outlines to further emphasize that although they are a feature of human beings, they are still not real. 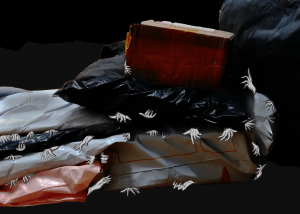 The colour of the photo is majority black and grey, with some reddish tone inside. Which is just the original colour of the packages, I decided to keep them but darken the tone as I think that red can show the feeling of enthusiasm towards online shopping, as well as warn that it may be dangerous.

Moreover, I made the background entirely black to show the cycle of buying and unpacking is endless.

The packages are placed orderly to form the shape of a wall, which allows things to hide inside and defends the outside world.

So what can hands do with the packages, open them right?

I recorded the sounds of me opening the packages, which includes cutting tapes, paper boxes, and popping bubble wraps. Also, add in the sound of typing keyboard based on Bryan’s suggestion

❶ The sounds started from pushing out a penknife followed by cutting the paper box slowly, which shows that the unpacking is going to start, the speed of it is being slowed down to create a sense of threatening.

❷ Afterwards, there was a mix of cutting and popping and typing at the same time, it also gets more intense over time to show the excitement of opening the package.

❸ There was the sound of typing on the keyboard, which continues almost throughout the entire 30s, which is to show that all these started from online surfing using computer. Towards the end, there was silence for about two seconds, and followed by the sounds of typing again to show that the cycle is continuing.

❹ Among all the sounds, the sound of cutting paper box was the loudest and, kind of repeating, which I want to show the feeling of mechanical, and how our lives are driven by technology. Also, I added a little bit of echo effect into it to show that when addicting with online shopping, our lives are becoming empty.

❺ there is also the sound of popping bubble wraps, which is relatively soft compared to the others. This is to create a sense of touching and fondling on the plastics to show the reliance and indulgent towards online shopping.

At first, I wanted to create something that is creepy, but while I was doing I decided to make it threatening as something is hiding there and watching you, and it can be yourself. People will keep finding easier ways to solve their problems and the threat will always be there…