To view more of our ideation process, you can click here!

This is our final concept – IDLE,
an interactive performance whereby the participants’ objective is to help 4 kidnapees escape by navigating them via commenting on the Instagram live stories to look for clues and keys. 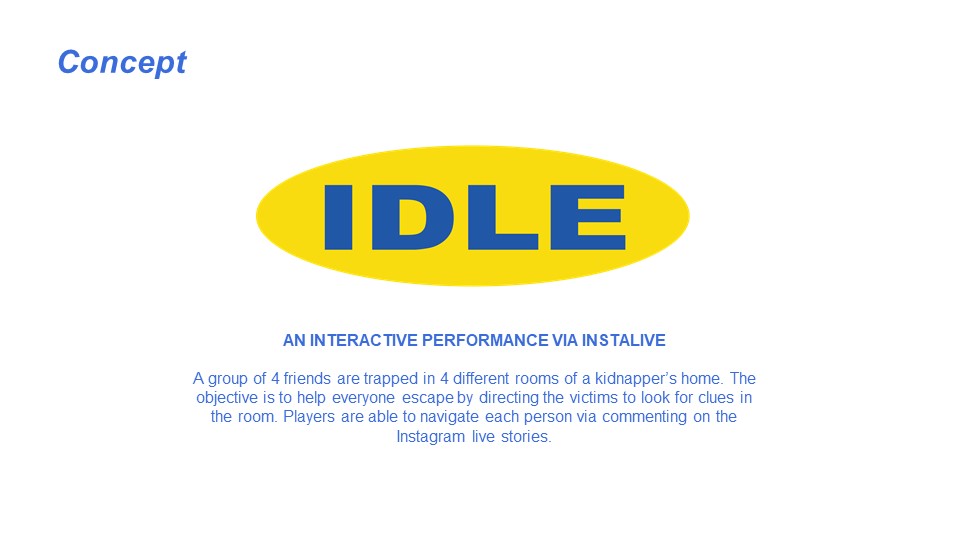 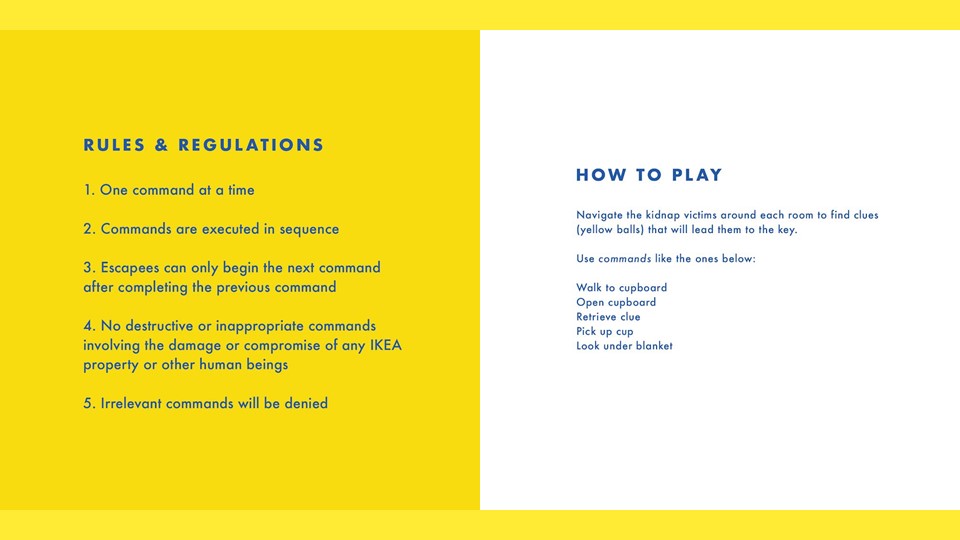 How does this work? How was it made?

Each kidnapee will be hosting one Instagram live story. The 4 rooms which make the “kidnapper ‘s home” are: 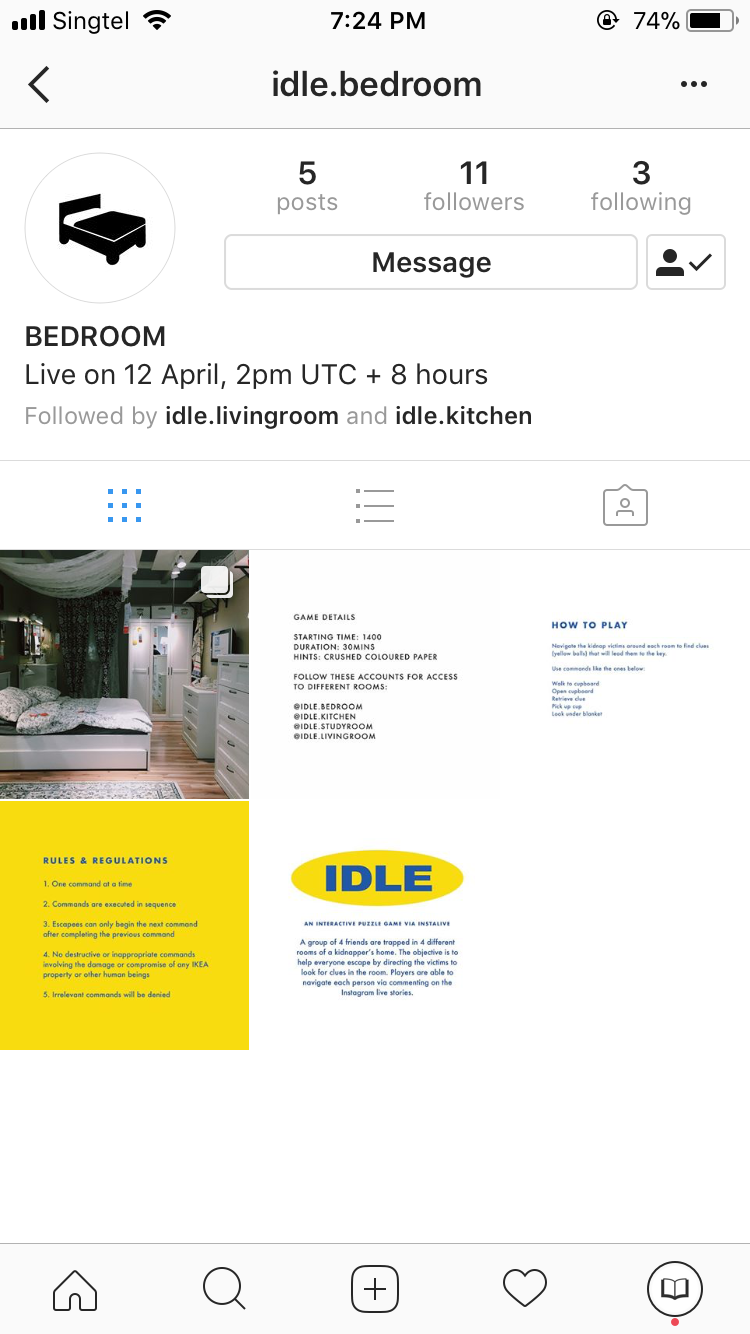 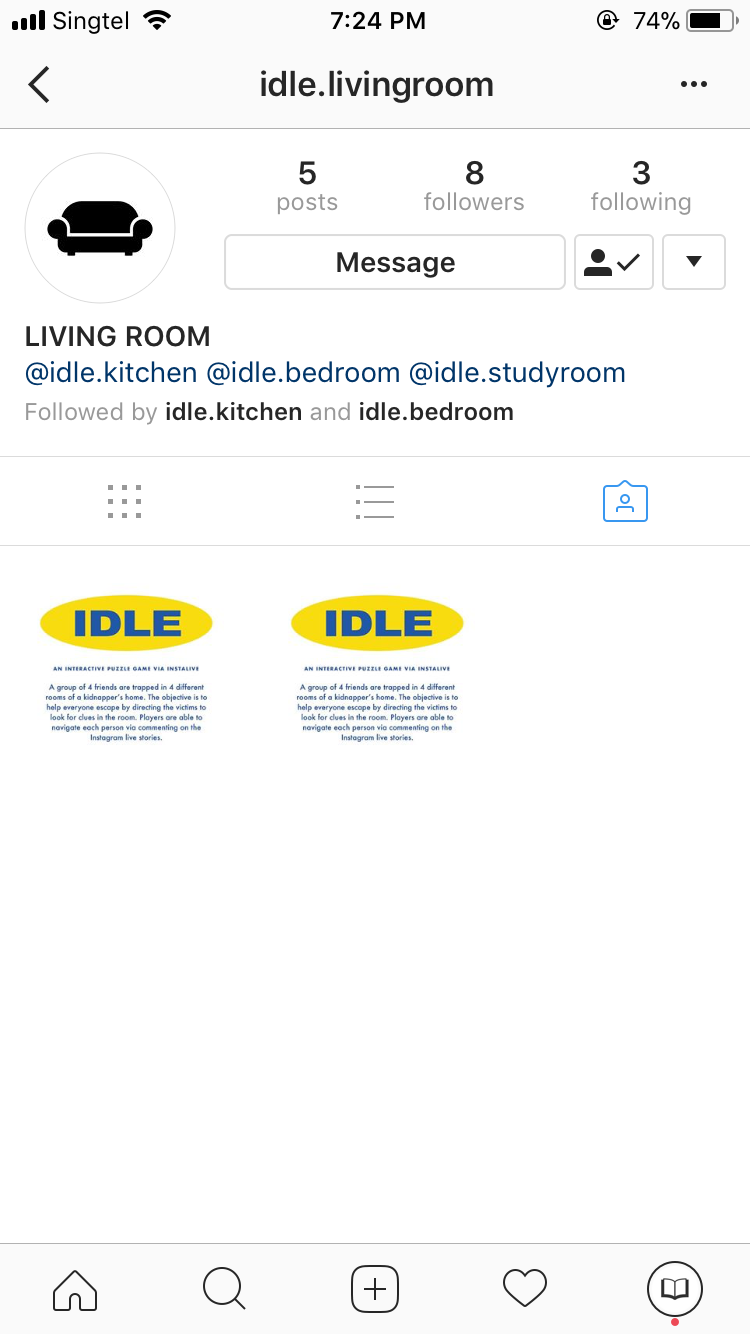 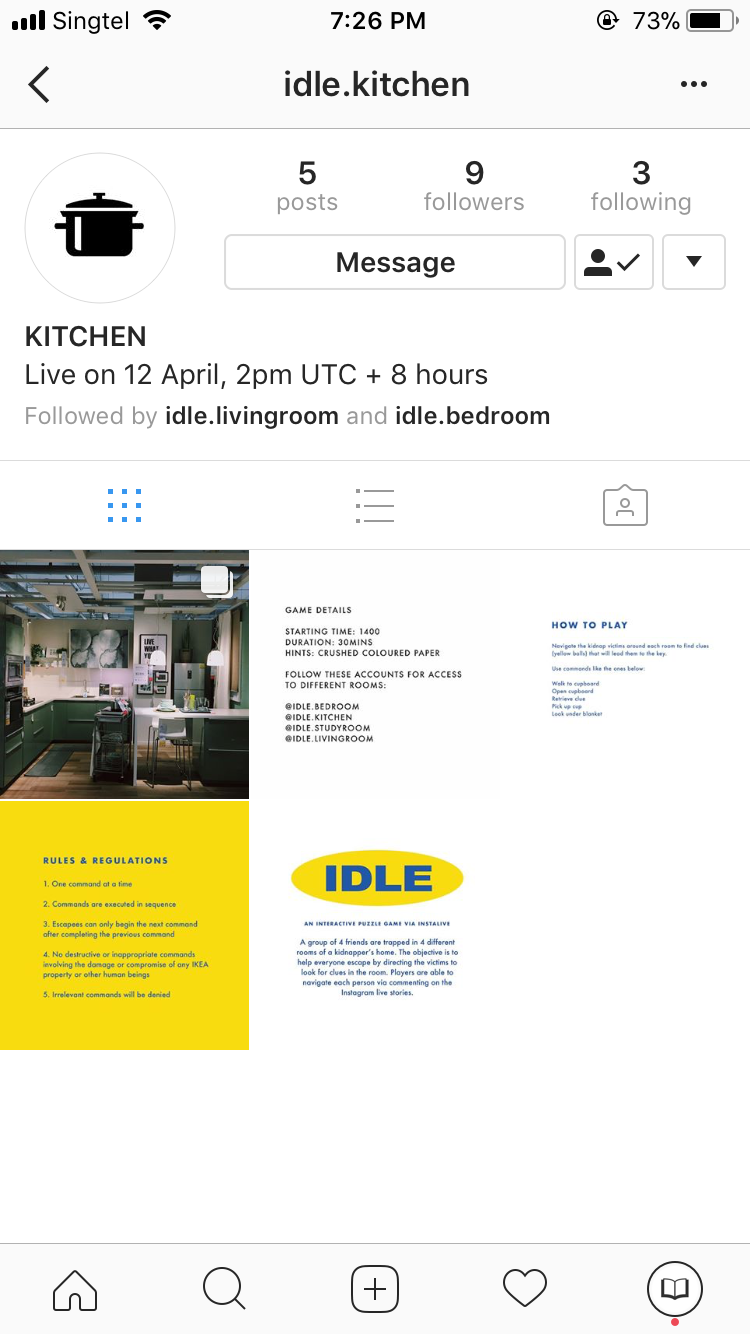 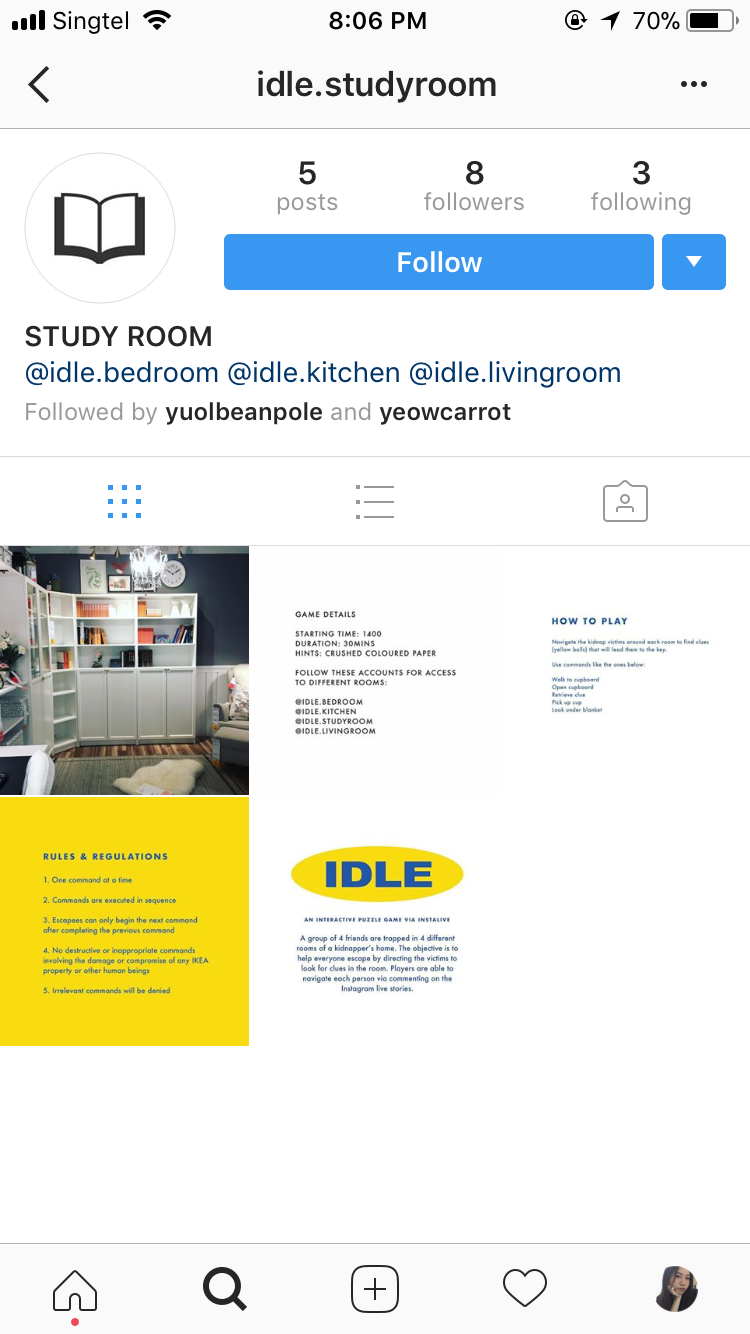 When the accounts of the 4 rooms go live, participants can comment in the chat section below to find clues and ultimately, the key. Here are some mock-ups of how the Instagram story live would look like during the interactive performance. 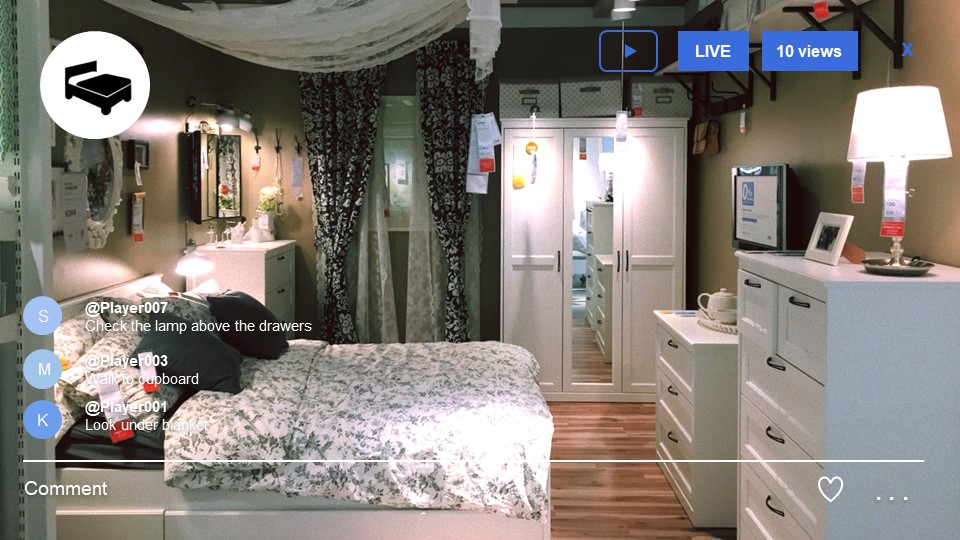 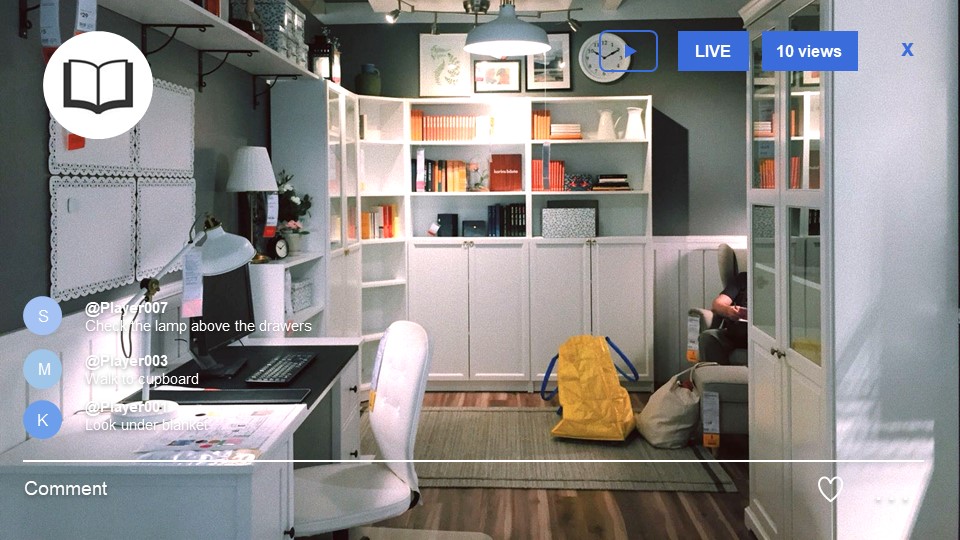 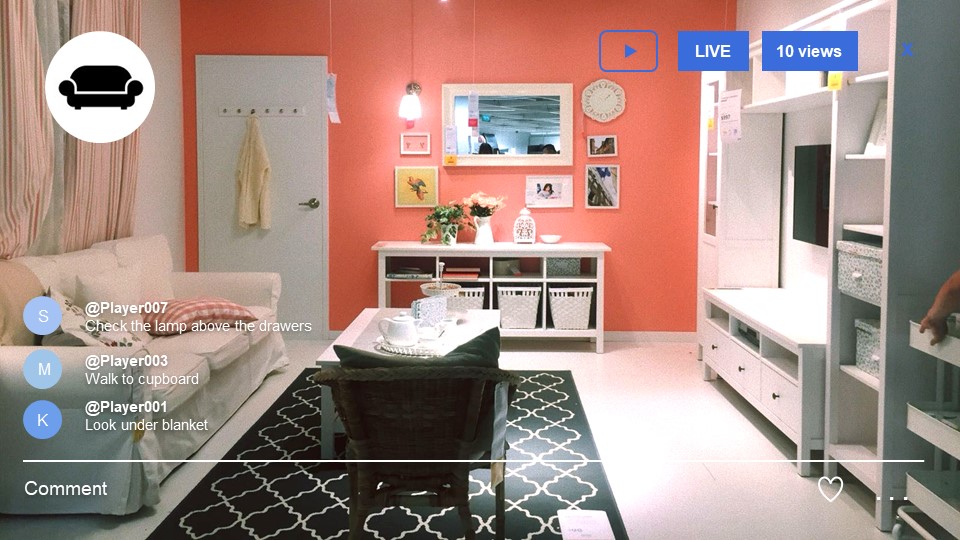 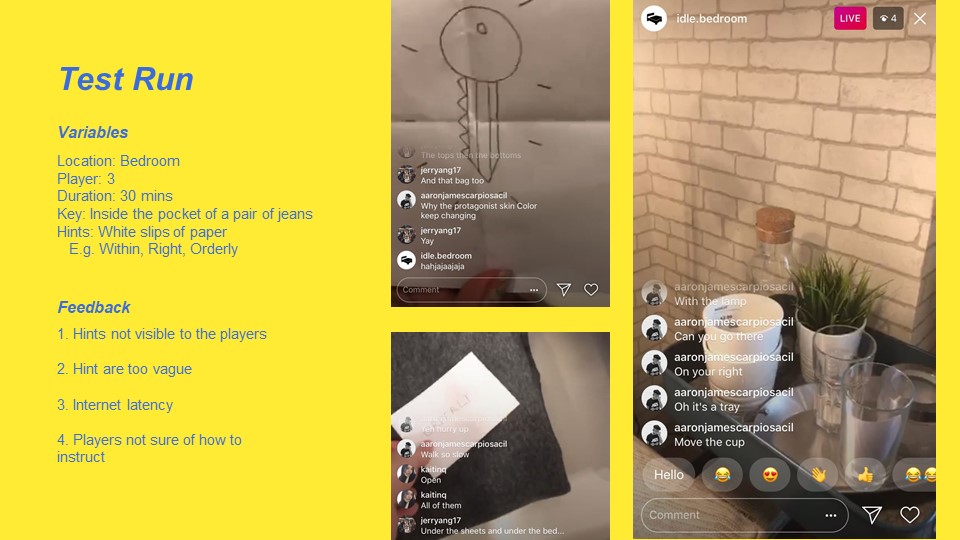 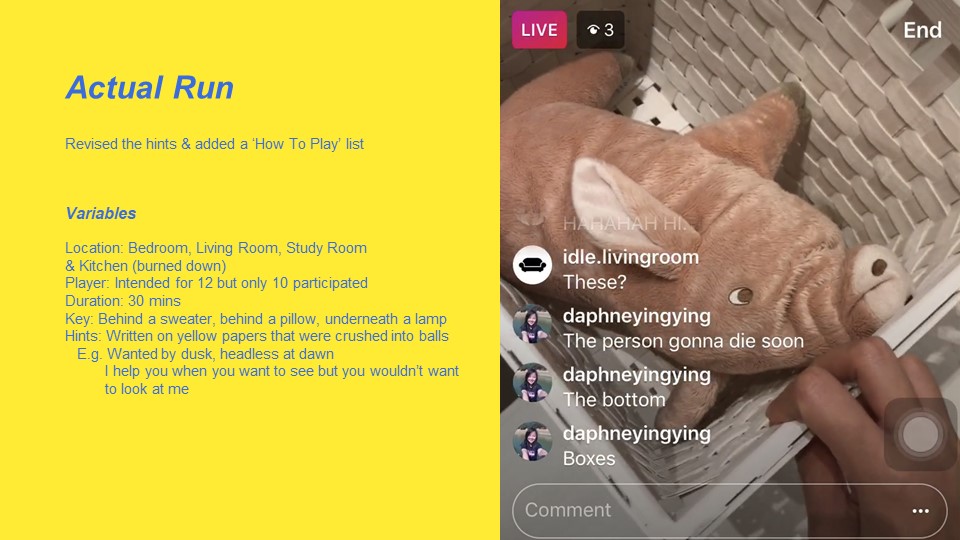 A screen recording of @idle.livingroom during the actual run (The blackout happened at the end and we have to end the instastory)

From our test run to our actual game, we had several things revised. My group and I had to discuss and come up with new hints as the old ones were too vague. Initially, we used vage words such as, “WITHIN” and “ORDERLY”. So, we changed it. For each room, there will be a clue which contains a riddle. Solve the riddle and participants will know the EXACT location of the key. One of the riddle was: Wanted by dusk, headless by dawn. (Answer: Pillow) Other than the main clue, we included 2-3 other clues, all leading to objects which are near or associated with the key. For example, one of the clues were “Floral” (Key was behind the floral cushion on a chair). Also, instead of white paper, we used yellow paper to make sure that the hint was more obvious to the participants from their screens. Lastly, we gave a clearer set of instructions and even examples of possible commands they could use.

Even though we made some changes to the test run in order to avoid glitches and accidents, during the actual run, there were still glitches occurring. 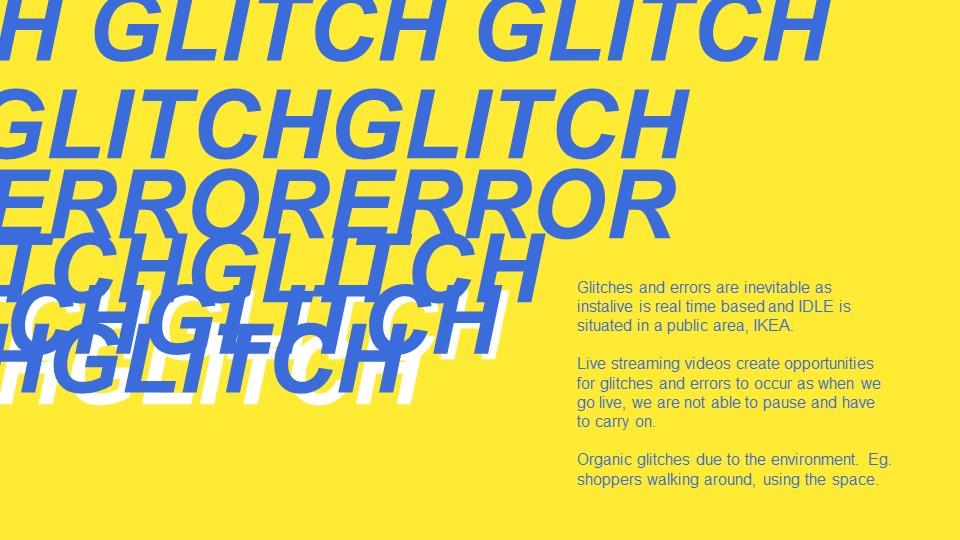 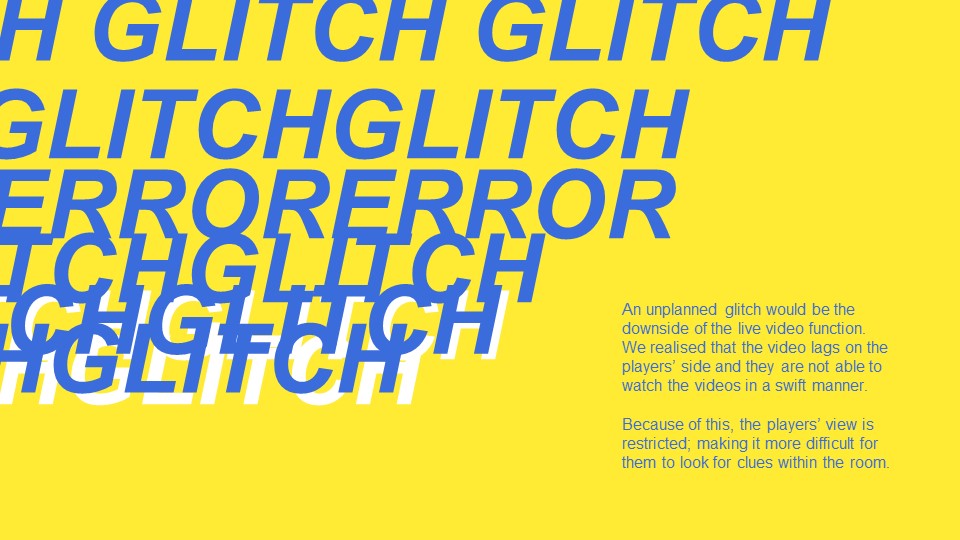 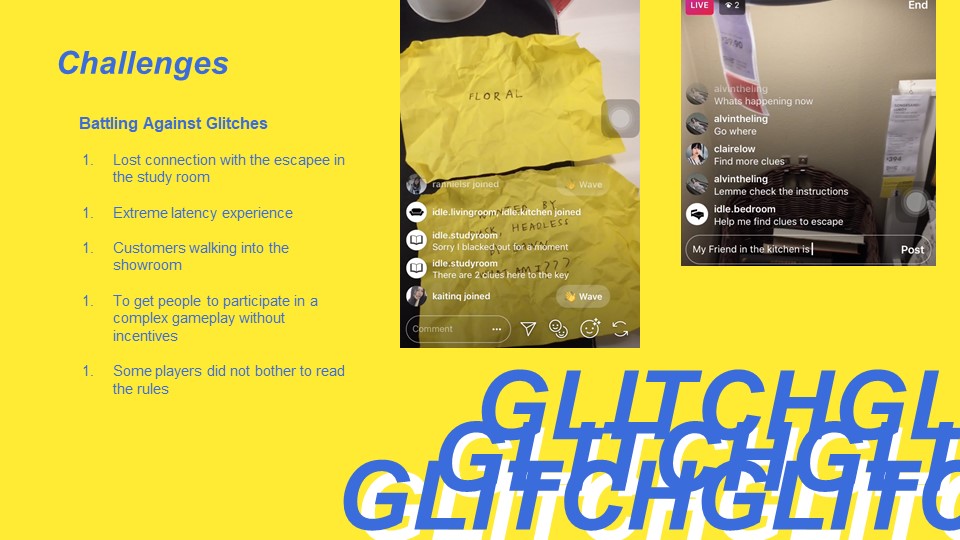 To me, the technical glitches that happened during the actual run were rather unexpected as for example, the lag experienced by the participant or the blackout was entirely unintentional and I actually panicked when my phone (@idle.studyroom) was lagging and eventually stopped recording. But thankfully, this “blackout” coincides with our narrative and we told the viewers that @idle.livingroom blacked out for a moment because of the fire in the house. Although impromptu, we ended up adapting to these glitches as even the lag could be seen as something hindering the participants from finding the clues. Judging from the participants’ reaction, they tend to show a sense of urgency and panicked when the live video went black or was lagging – which was a good sign as they were more compelled to find clues quickly before the kidnapees “die”.

Initially, there were supposed to be 4 kidnapees with 4 different room accounts, but also, due the unforeseen circumstances, insufficient participants turn up online on the actual day itself. Thus, we made do with the current participants and tweaked our narrative. We told them that one kidnapee turned on the stove while trying to escape, which led to a fire in the house and they have only 30 minutes to help everyone escape. In my opinion, this tweak enhanced the narrative and actually gave us opportunities to interact and talk to our participants. At some point in time, we will remind them that the kidnapees have limited time by saying “the smoke is getting to me…” etc. Which one of them so happened to be the actual technical glitch that I experienced. 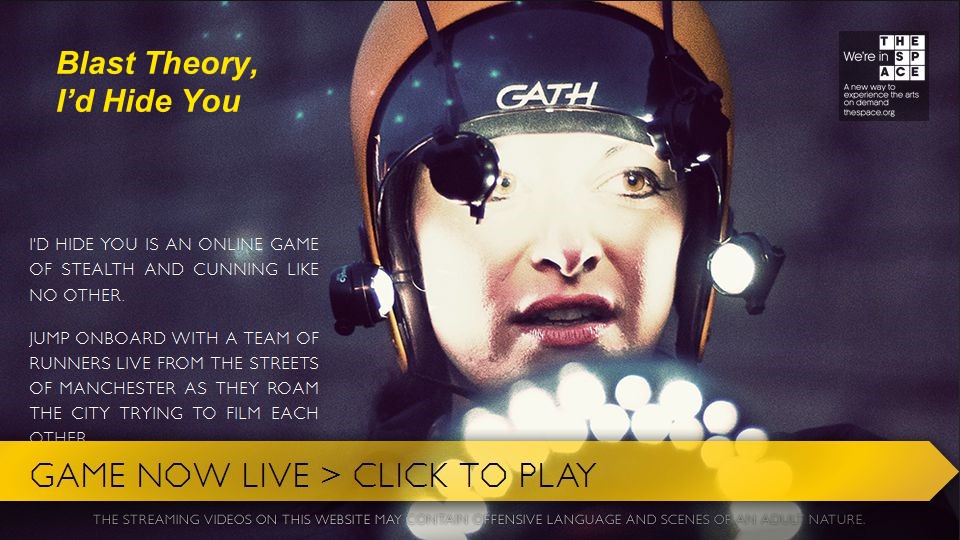 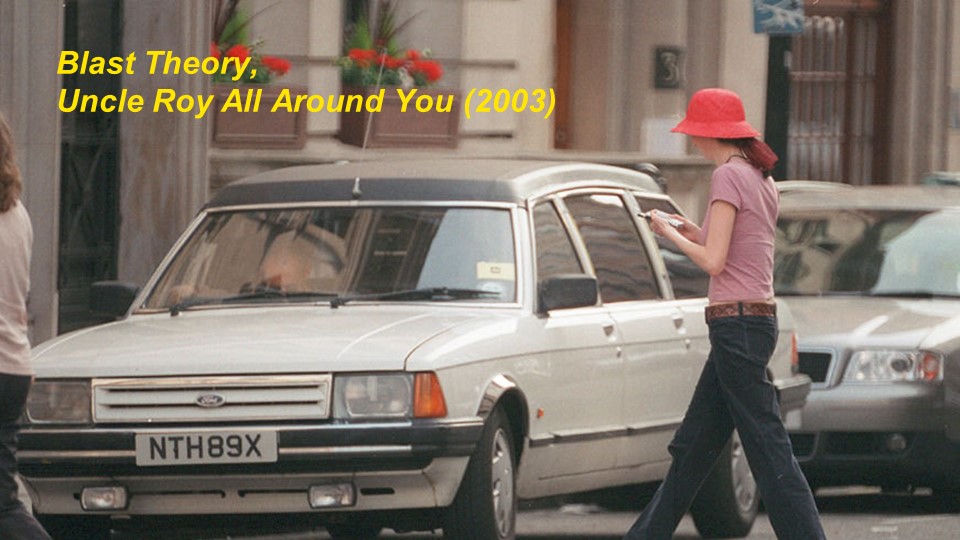 Mainly drawing inspiration from these two interactive performances/game from Blast Theory, we wanted to incorporate the third space, similar to how they did. It is interesting as to how online players can interact with the people who are physically in that area. As for I’d Hide You, the use of the third space really changed the dynamics of the game. If weren’t for the use of third space, it would just seem like an ordinary game of tag.

IDLE, is similar, as we wanted to change the dynamics of the ordinary escape room/game setting. Thus, I would say that the live video function really contributed to the core of the game. 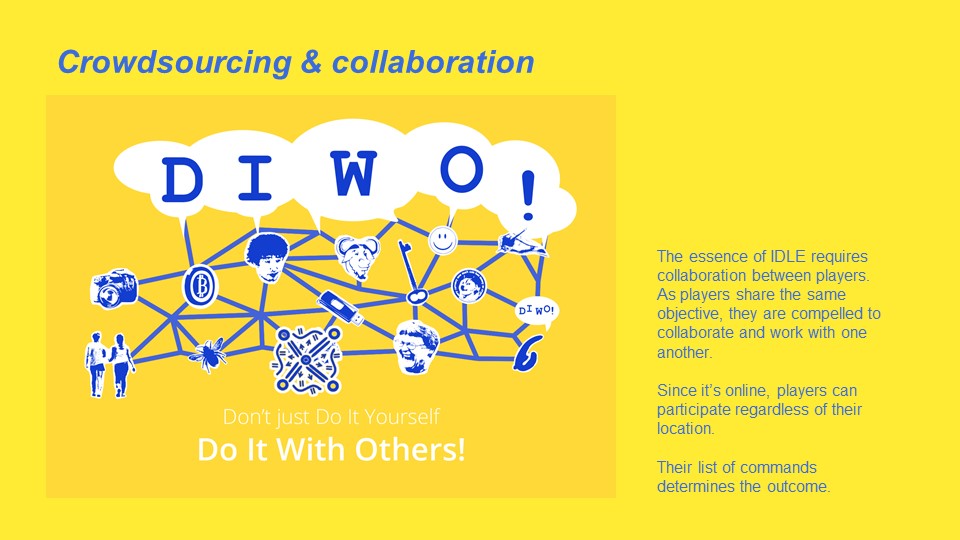 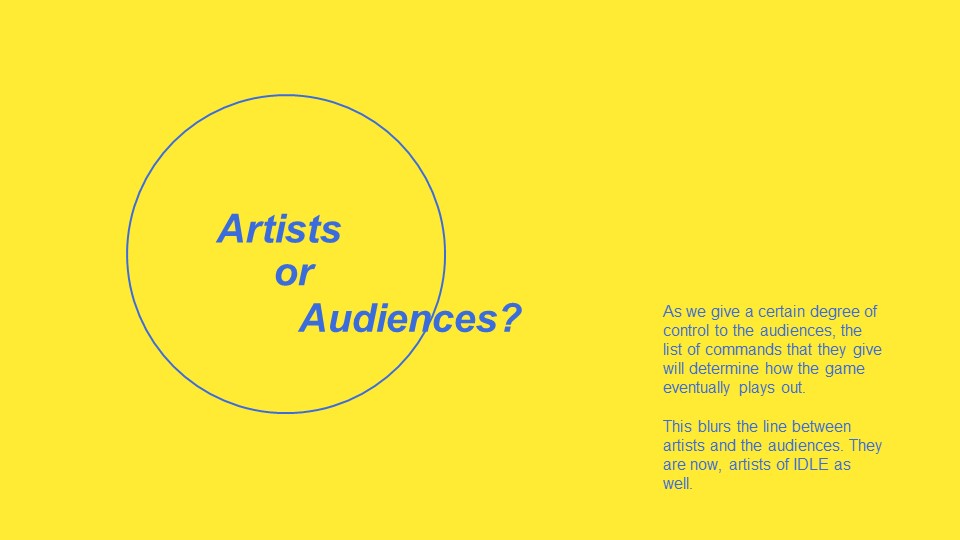 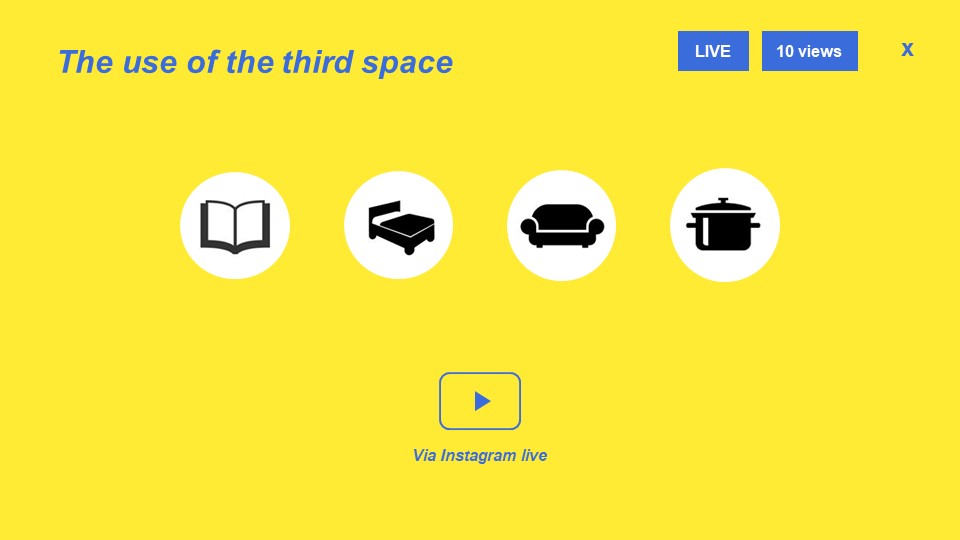 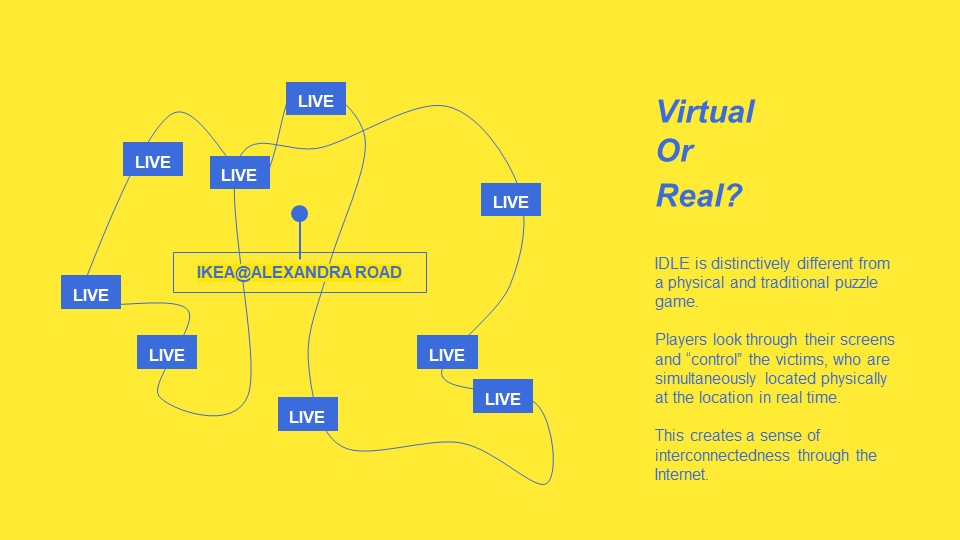 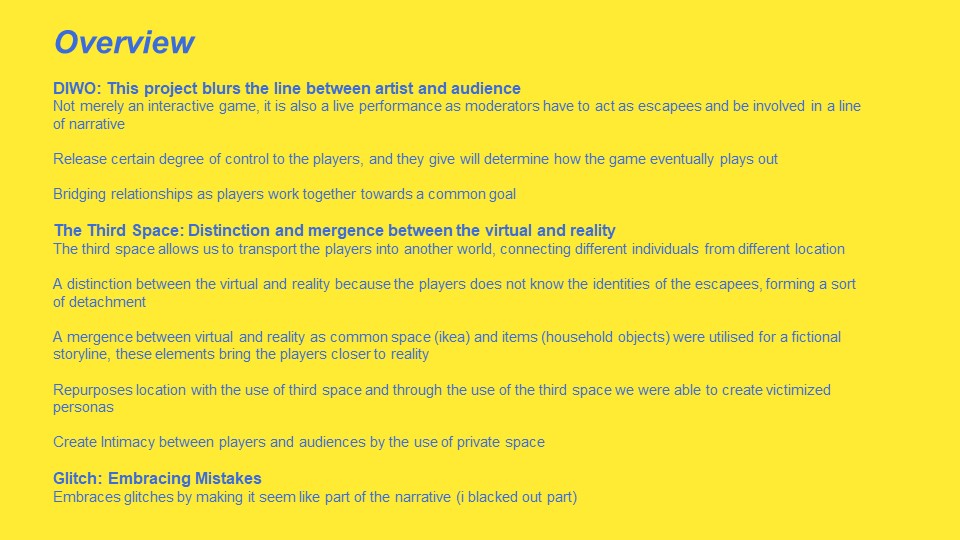 This project, I would say, had a few distinctive stages which led to the final interactive performance – Ideation, Implementation and Reiteration. From my previous post, it consists mostly of the ideation and planning part. In this post, I focused more on the implementation and reiteration – where we try out the game and make refinements to it. Although we encountered glitches in our final run, it was fun and exciting to adapt to these glitches which unexpectedly changed our narrative a little. Being site-specific (IKEA), contributed to the fun of this project as it allows many glitches and unexpected elements to occur.

If I could change something… it would be the number of participants. Afterall, we did limit the number of players but maybe it could be on a larger scale whereby there are many characters trapped and the players all have to rescue them. Or, it would be that we improve the narrative and coordination in such a way so that all the rooms are interconnected. For example, if one kidnapee successfully escapes from a room, the key will lead to the next room. This might actually give a more coherent flow to the game rather than people switching in and out of the different instagram accounts. Lastly, incentives maybe?? 🙂 So as to reward those who manage to find the clues and keys! (and a way to find more players)

Overall, experimental interaction was truly interesting and different from what I normally do. I’ve learnt many concepts (some strange as well) but beneath that, there is always a lesson learnt at the end of the day. Hope I’ll be able to incorporate what I’ve learnt this sem in the future!! 🙂