Having to attend 2 of the online symposium sessions live and watching the other through a recording, it was definitely an eye-opening and phenomenal experience for me. The symposium has shown how the limits of social broadcasting can be pushed, creating a whole new immersive and sensational experience through the performance art.

The concepts from the keynotes by Maria X and Matt Adams included a revisit of what I have learnt and discussed in class, for example, Uncle Roy All Around You by Blast Theory. I felt that it was a good head start to have a basis of these concepts as the performances, later on, became more abstract.

Both performances which I have watched, “Entanglement” by Annie Abrahams and “igaies” by Jon Cates, were spectacular and an eye-opening experience for myself, which I will discuss in-depth later on.

With the advancement and rapid changes in this world, we are bound to experience some sort of revolution – in this case, a digital revolution. This hyperessay closely looks at social broadcasting being a communication revolution. The symposium is an interconnected platform whereby artists collaborate and perform together through the Internet and a networked third space (Adobe Connect). The analysis includes exploring collaborative performance art, the boundaries of networked spaces and how these artists pushed the limits of performance through a networked space to create an immersive experience for the viewers. The symposium also demonstrates the embracement of glitches and errors during the performance.

Social broadcasting via a networked space is claimed as revolutionary. Having to experience this symposium, an online third space environment, it is evident that the shift from one-to-many to many-to-many forms of live performance changed the dynamics of how a traditional one-to-many social broadcasting can be.

The first performance, “Entanglement” by Annie Abrahams on Day 1, exemplified this change in dynamics. In Entanglement, 7 artists remotely performed via their webcams. Despite being in different locations and even countries, the performance showed telematic connectedness as the artists were mostly in synced. Collaborating was key here. Common motifs were seen throughout the performance such as their hands and fingers on the screen or circular objects and the artists each had a phrase to say, accompanying the object. Also, it seemed like the position and movement of the objects are being mimicked by each other to create a sense of connectedness. 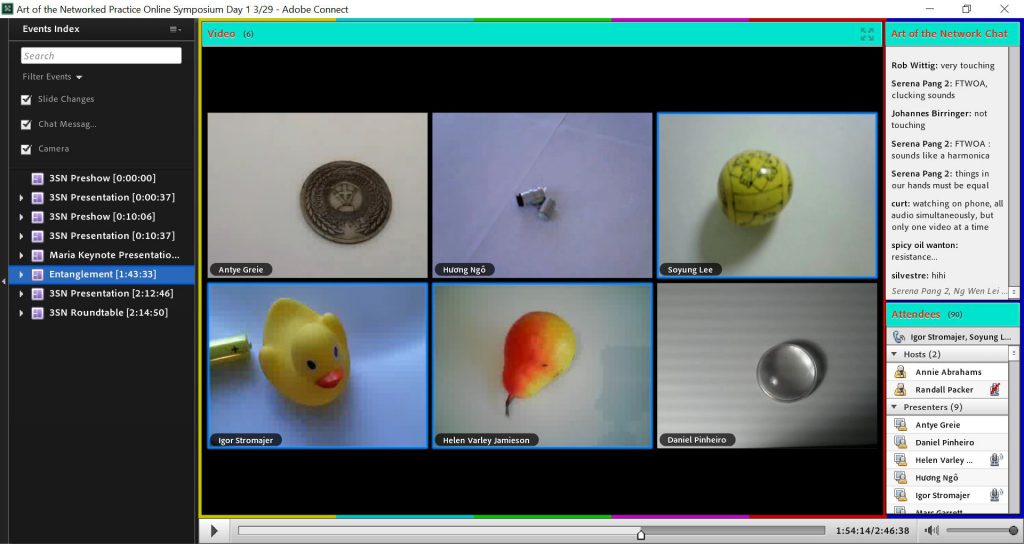 Although explained later on that the lag was unintentional, Randall Packer brought up a relevant point by saying that this is too, a glitch that occurred naturally. Linking back to our syllabus, glitch surrounds us in this world and embracing glitch is an art. Also, this performance is exemplary of DIWO (Do-It-With-Others) by Marc Garrett, where it involves people all around the world to create artworks and performances together, yet remotely.

According to Annie Abrahams,

This is a notion of freedom and expression. They are able to express whatever they want and whoever they are.

These actions seen throughout the performance represent how free these artists can express themselves by using objects and also how the flexibility of the networked space grants greater control for these artists; the very essence what freedom means.

The underlying meaning of this performance resonated with what I have learnt in class and this very performance was a unique and eccentric method to show how abstract and collaborative a live performance art can be, breaking away from the conventional performances. Comparatively, looking at, for example, Yoko Ono’s Cut Piece (1964), the core of Entanglement relies largely on online viewers from all over the world, whereas the latter, was a traditional and physical performance; both demonstrating different kinds of experience and involving different degrees of audience participation and involvement.

On Day 3, there were 2 distinct parts during the “igaies” performance by Jon Cates which I would like to highlight – the front section from xXxtra.Princess which focused broadcasting aesthetics and the later part which includes placing leeches on Robert during the performance.

“Cute” is what everyone described it as. The split screen function shows the artists, xXxtra.Princess, using filters to alter their avatar and their shared screen (as shown below). 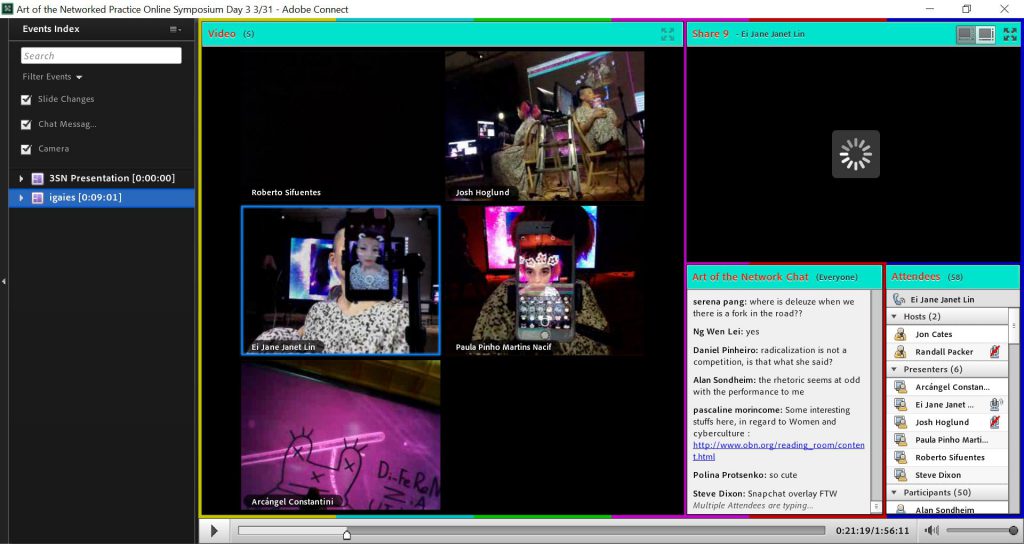 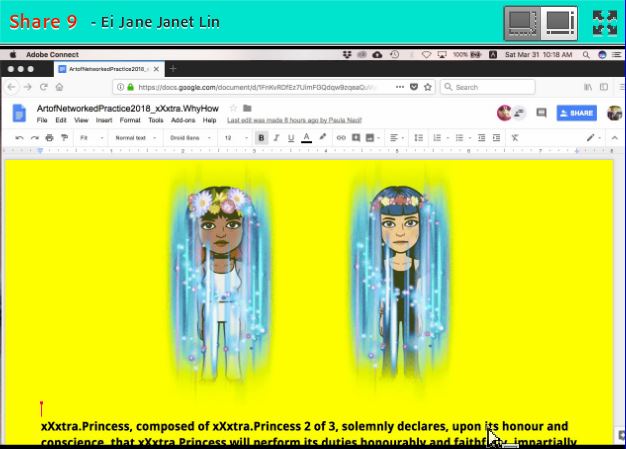 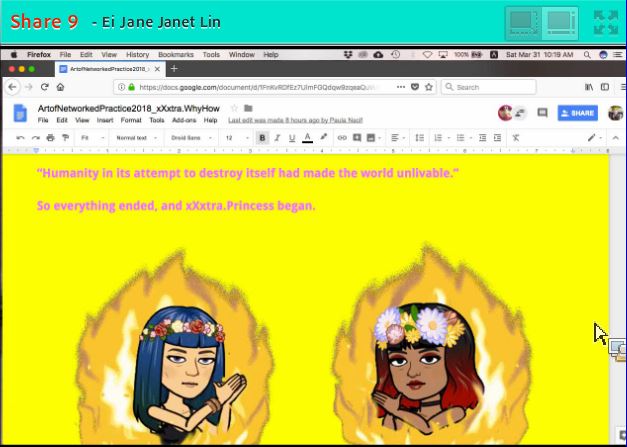 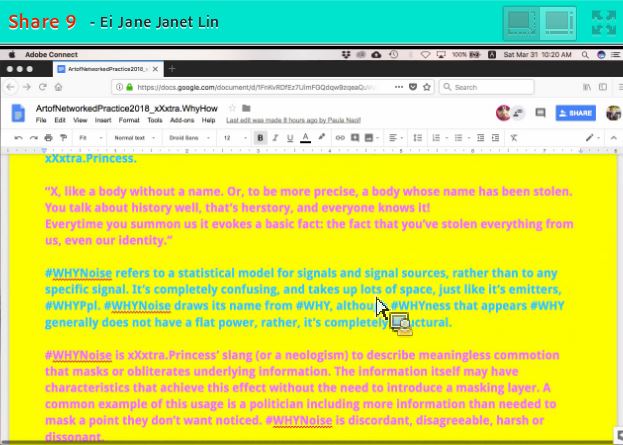 I was bombarded with internet terminologies. Yet, I really enjoyed how the xXxtra.Princess conveyed their narrative, touching on societal issues.

Some felt that it was redundant to utilize an alternate avatar with the phones placed in front as it does not affect the nature of how collaborative this performance is. However, I felt that the use of internet aesthetics was perhaps a method to veer from the ordinary and traditional. These methods curate creative dialogues and suggest modernity and the digitalized world. 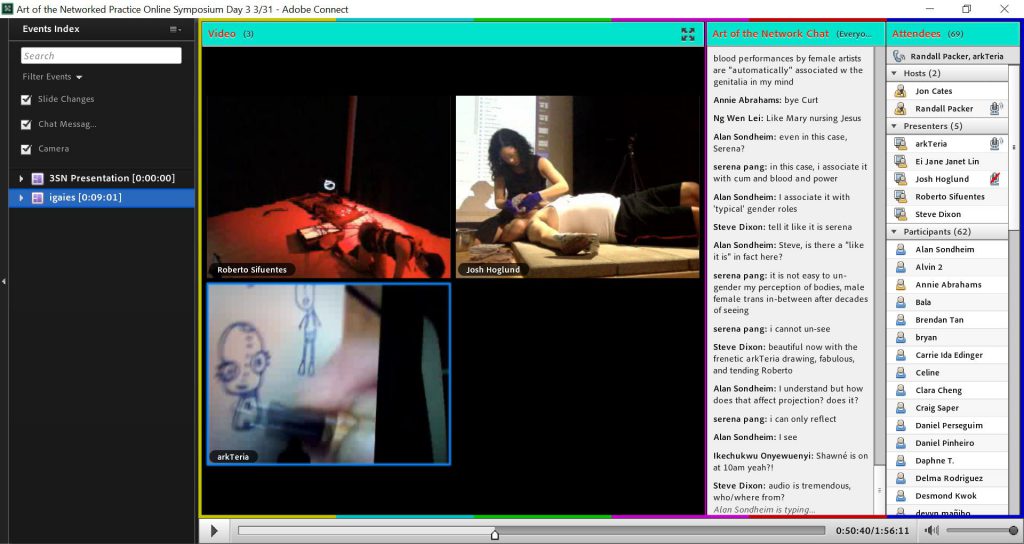 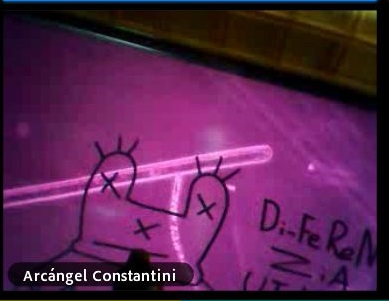 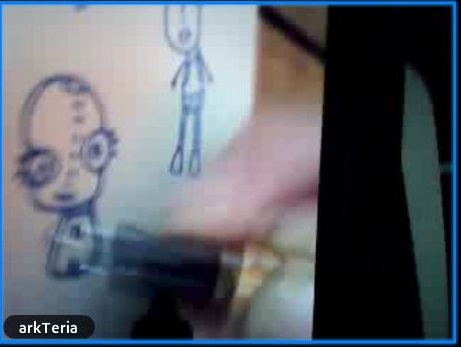 Close up screenshots of drawings from Arcangel Constatini and arkTeria. 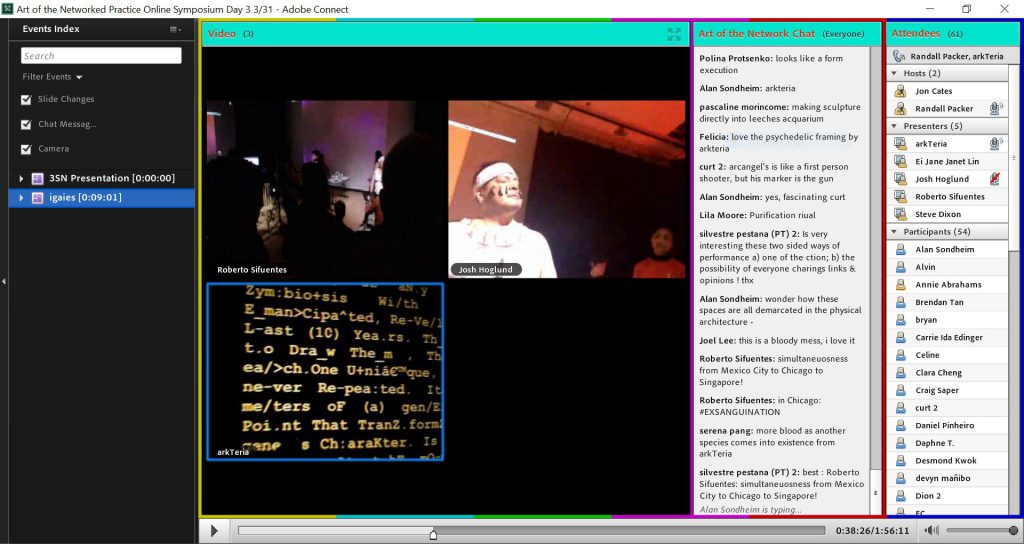 “We are the leeches. The leeches are us. We are each other. And the Internet is also an animal. I think it’s beautiful.”

Initially, I was confused by this. But as the discussion went on, I have learnt that this “leech ritual” refers to a body alteration which demonstrates glitching. The whole idea of this was about the interconnectivity of life forms, drawing similarities to the third space network interconnectivity.

In this particular performance, my main focus revolved around considering both type of audiences – the online viewers and the physical participants. With both concurrently happening, it constitutes and curates an alternative social world. This live performance is not just merely “live” for one group of audiences there, but “live” in another layer as online viewers are watching it as well. This was a unique aspect of this performance as we can see both the performance from and outside of the audience’s perspective. With this, the online third space environment is expanded to an extensive audience all around the world as they experience this live performance. In addition, this shows the power of a networked space and social broadcasting of many-to-many. This is what, I feel, makes it revolutionary.

In conclusion, through experiencing the symposium myself and analysing these performances, I can see how artists break away from the conventional performance art by playing with the online third space environment. It is an enriching experience as they successfully integrated concepts, narratives and brought up societal issues through the performances and chat conversations.