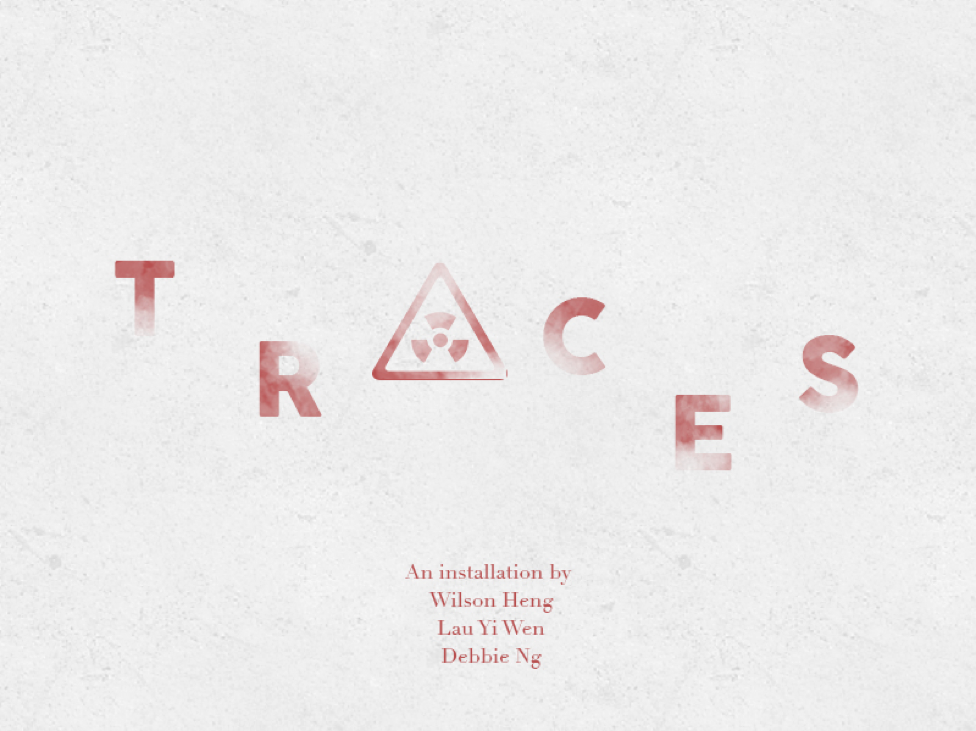 Final assignment with Debbie and Wilson.

The 2011 Fukushima earthquake led to the world’s biggest nuclear disaster since Chernobyl. It’s been five years, and citizens are still unable to return to their contaminated homes. The radiation levels remain dangerously high, and will probably stay this way for a long time. We were intrigued by the state of homes in the Fukushima prefecture left by citizens who were forced to evacuate. The untouched homes within Fukushima now serve as a time capsule, capturing the moment of anxiety when disaster struck. This is inspired by an installation called “Don’t Follow The Wind” (2015), where a group of artists entered the exclusion zone and placed their works in abandoned homes.

In our installation, the audience steps into a room belonging to a former Fukushima resident, and gets an intimate look into her daily life before she knew what was coming. We invite viewers to think about the power of inanimate objects and the stories they can hold. At the same time, there is a slight nod towards the relationship between man and nature — when man leaves, nature flourishes. Finally, we hope to generate discussion about the nuclear meltdown and its ongoing repercussions.

The idea for TRACES came about when we chanced upon a documentary about an art installation held within the exclusion zone of the Fukushima prefecture, called “Don’t Follow The Wind”. In 2015, a group of 12 artists including Ai Weiwei and Trevor Paglen created works that were placed within three buildings in the exclusion zone (Muñoz-Alonso). The thing is, the works will not be open to the public until the area is free from contamination, possibly in a couple of decades. “In this way it will serve as a monument to the disaster, and its ongoing consequences,” says one of the participating artists, Franco Mattes. 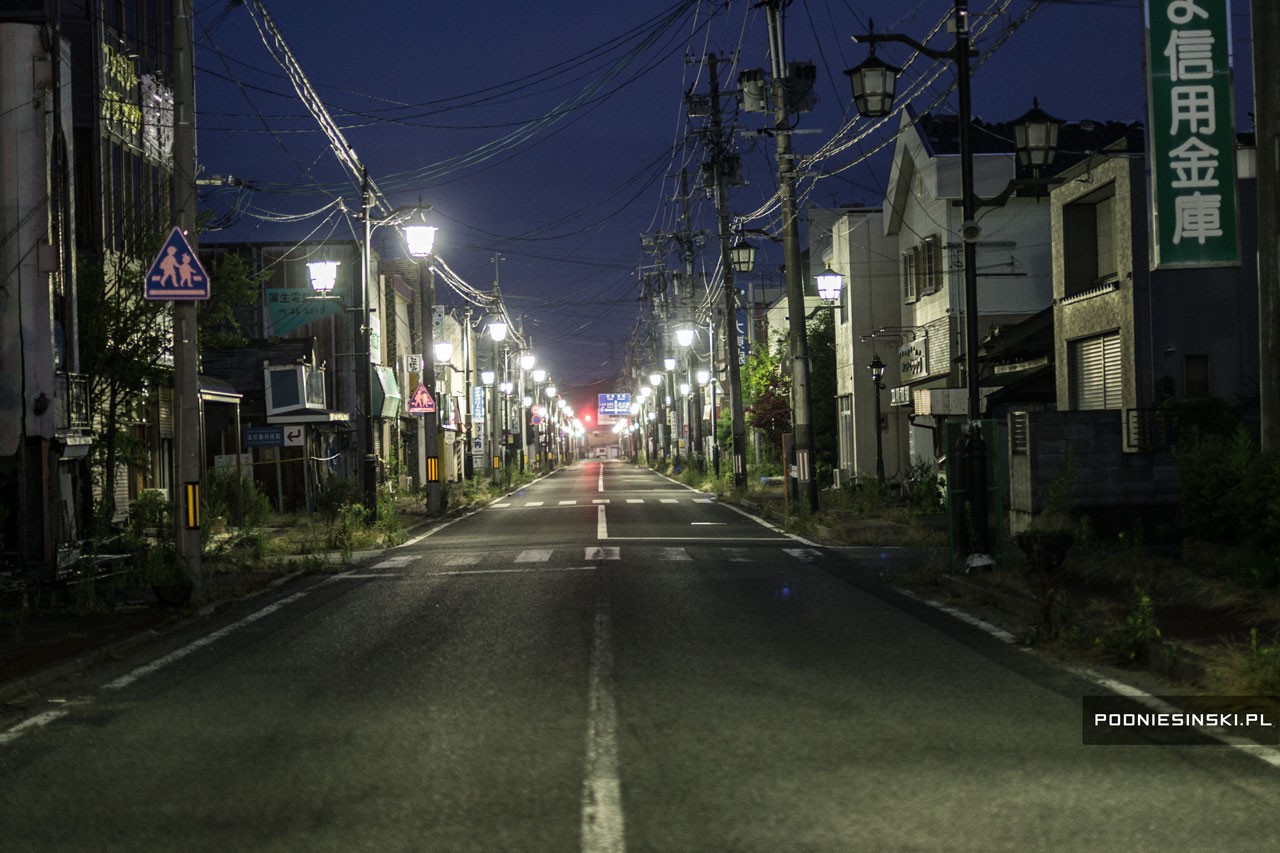 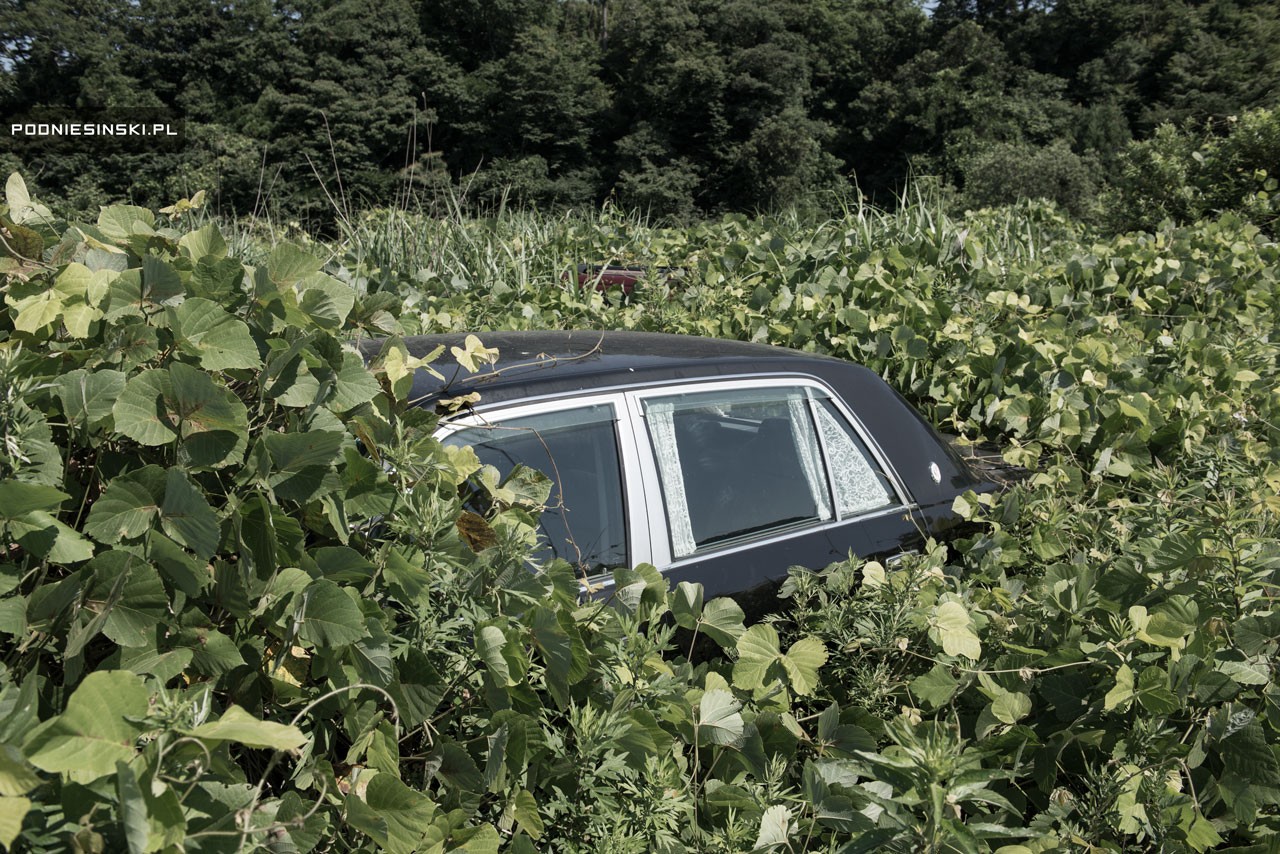 Although the Fukushima Daicii nuclear disaster happened in 2011, citizens are still coping with the effects five years on. Many of the 300,000 people who were displaced are still seeking answers as to when they can return to their homes. Because they weren’t allowed to bring their belongings with them for fear of contamination, their homes are filled with memories, sentimental treasures and daily essentials, a time capsule of their lives before they knew about the tragedy that was to come.

We decided to create an installation space that explored the use of inanimate objects in a room, and how the combination/placement of items could tell a narrative, or paint a picture of emotions when disaster struck. Making use of what we learned in class about characterisation, the idea was to suggest a presence instead of physically having one in the room.

We also implemented the appropriation of videos, piecing together news clips, citizen captured videos, documentaries and interviews as a timeline for the audience to get a sense of how the past five years have been in Fukushima. Appropriation is a useful tool for shedding light on social issues. By extracting the original imagery and rearranging them using pattern, repetition and juxtaposition, artists create new meanings in the work (“A New Order: Appropriation Art In The Digital Age”).
The video not only serves as a concise recap and informative source for audience, it also brings about more discussion and awareness of what is going on. For example, the interviews in the video revealed a lot more insightful details, such as how a family of six is squeezing in a child’s room, likely to be even smaller than our installation room size. Another interview then pointed at the government not being truthful towards the locals, not telling them accurate details about the radiation levels as well as being unable to give them an answer as to when they can go back to their homes.

Our appropriated video compresses the five years into a single clip saturated with sadness and fear, further highlighting the severity of the Fukushima nuclear disaster. In the installation, it plays on loop on an old television.

Throughout our execution of the installation, there were countless times our ideas did not turn out as well as we had expected, and were thus improved on or scraped, changing along the way to our finalised installation.

The initial appropriated video was more than 7 minutes long and we felt would be too draggy for audience to view if it was on loop. If they missed the start, they would have to wait for a long time for it to restart, causing it to be a bit boring. We had also intended to add in more thought provoking ideas by localising it, asking what would the audience feel if the nuclear disaster hits Singapore, or even turn into a global disaster.

In the end, we decided to do away with these and cutting it down to 5 minutes, just to bring across the key points of recapping as well as some important details. The clips were clustered based on the similarity of events, just as how we were showed an appropriation artist once clustered clips of gunshots and made this his own installation.

Our initial set up of the room was also different. While facing the main projection, the bed was initially on the right, the table on the left, which could be seen in our video documentation of the setting up. We later felt that this layout could not bring out the “room” kind of feeling we wanted, together with some concerns on the placement of projectors and projections, we decided to swap it around, ending up with a table against the wall, and the bed along the glass windows on the left. This way, we could also use the projection of a window above the table to provide a light source.

For lighting wise, we felt that the entire setup was nice in very very low light conditions when we tried out our initial setup on Sunday night, where we worked through the entire day to see what problems we might encounter (which turned out we had a lot). This was initially inspired by how The Future World exhibition has everything in darkness such that the main objects are in focus, drawing the full attention of audience. 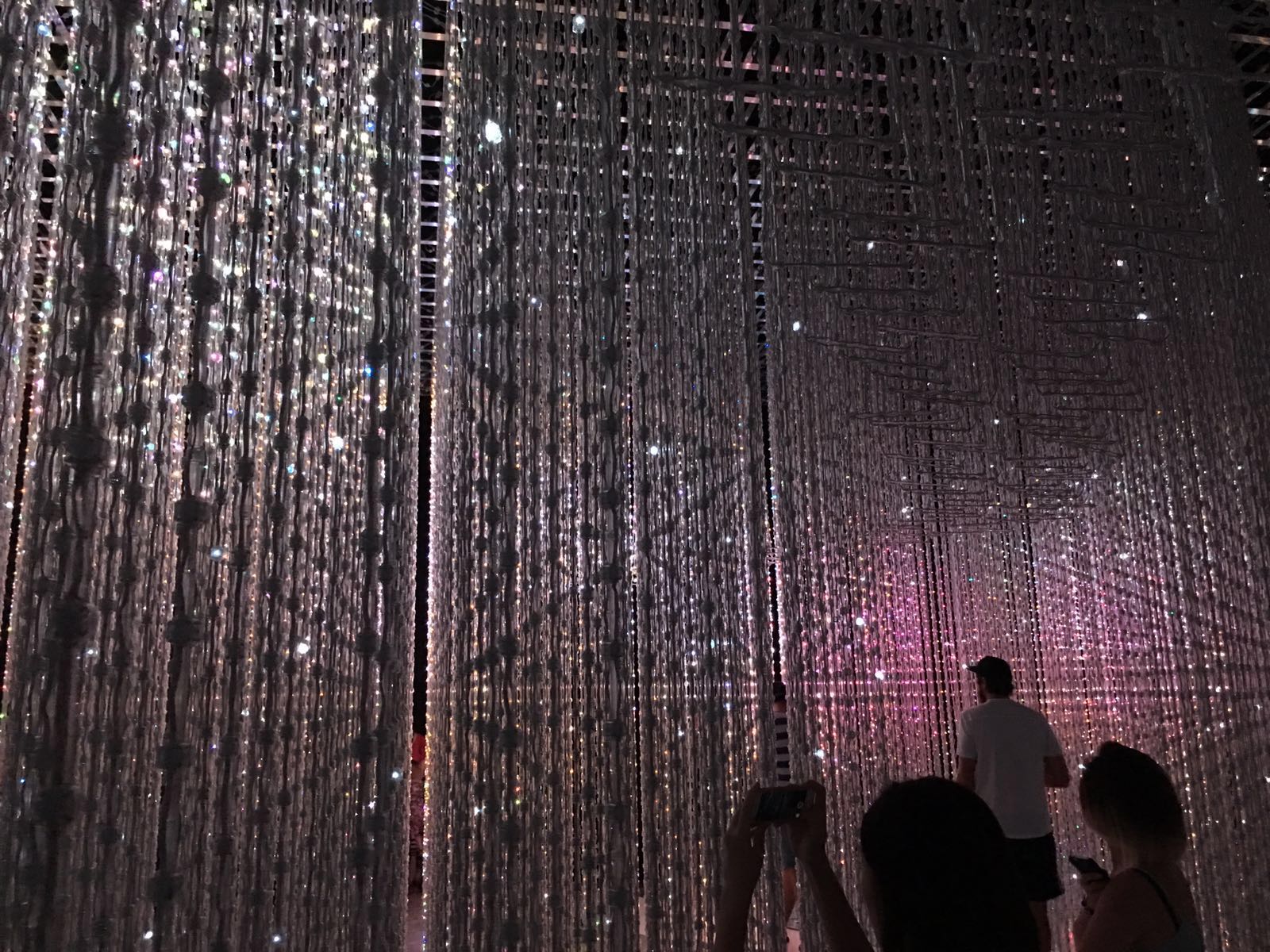 Nonetheless, there has to be sufficient lighting for everything to be seen, to make sure the objects add value to our installation instead of just being there. We switched the lights on and off multiple times in a dilemma to whether the lights should be on or off, before coming up with the idea of making use of the projections as a source of light, as well as getting fairy lights to highlight certain important areas. This way, the room would be slightly dark to give a haunting feeling or being deserted, yet the lights could help out the original warmth of the room as well.

We invited our audience to enter the room without giving away any details. They were allowed to touch and feel the objects, crafting a story in their own interpretations. Here are the key elements to guide audience in enveloping an intimate understanding of an unidentified persona in her abandoned room.

The door of the room was decorated with caution tapes stuck across the door, together with an emergency notice of the evacuation to give a context and ambience even before the audience steps into the installation. A smaller piece of notice was also partially exposed from beneath the door to seem as if the notice came from inside the room. 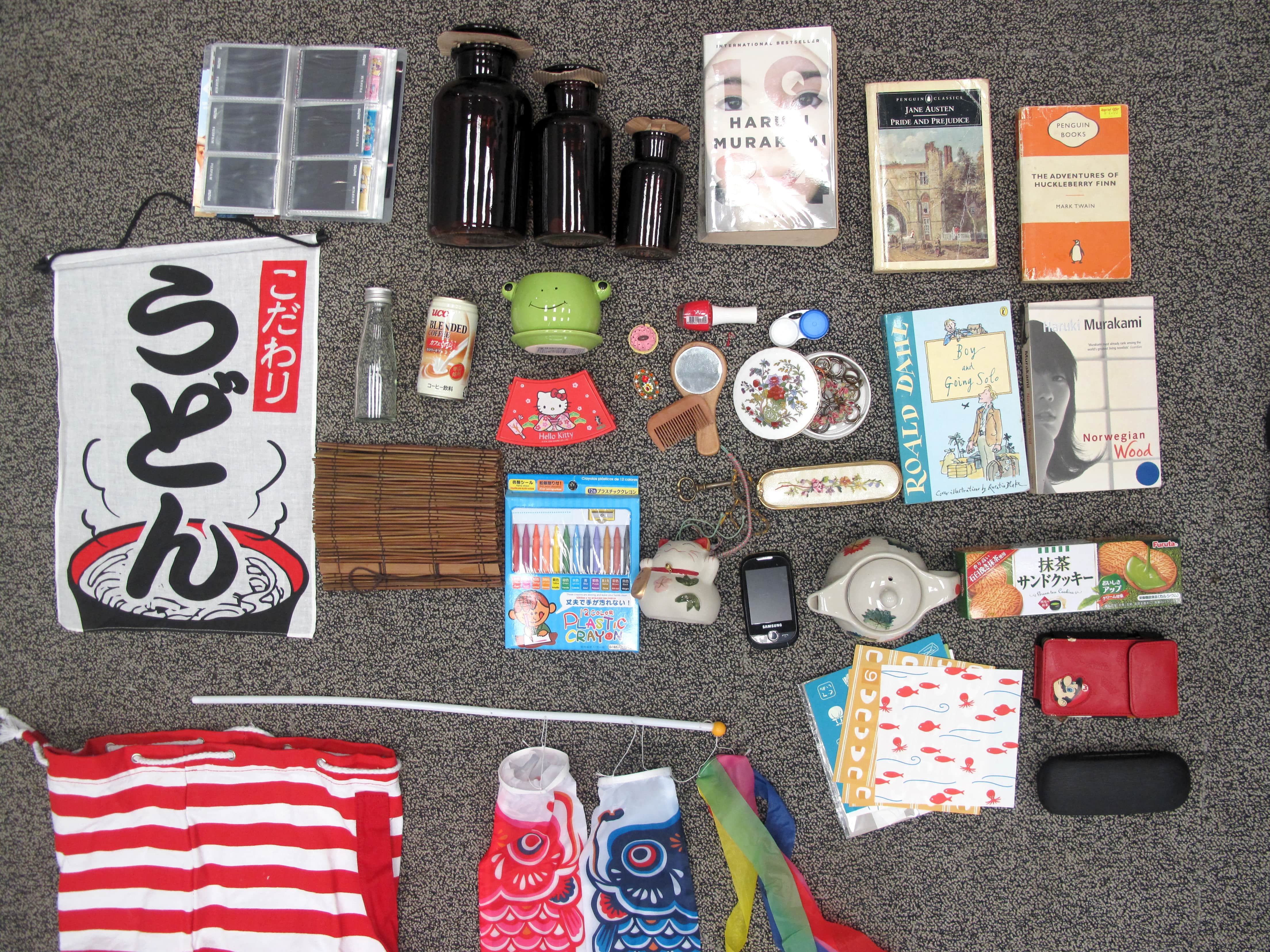 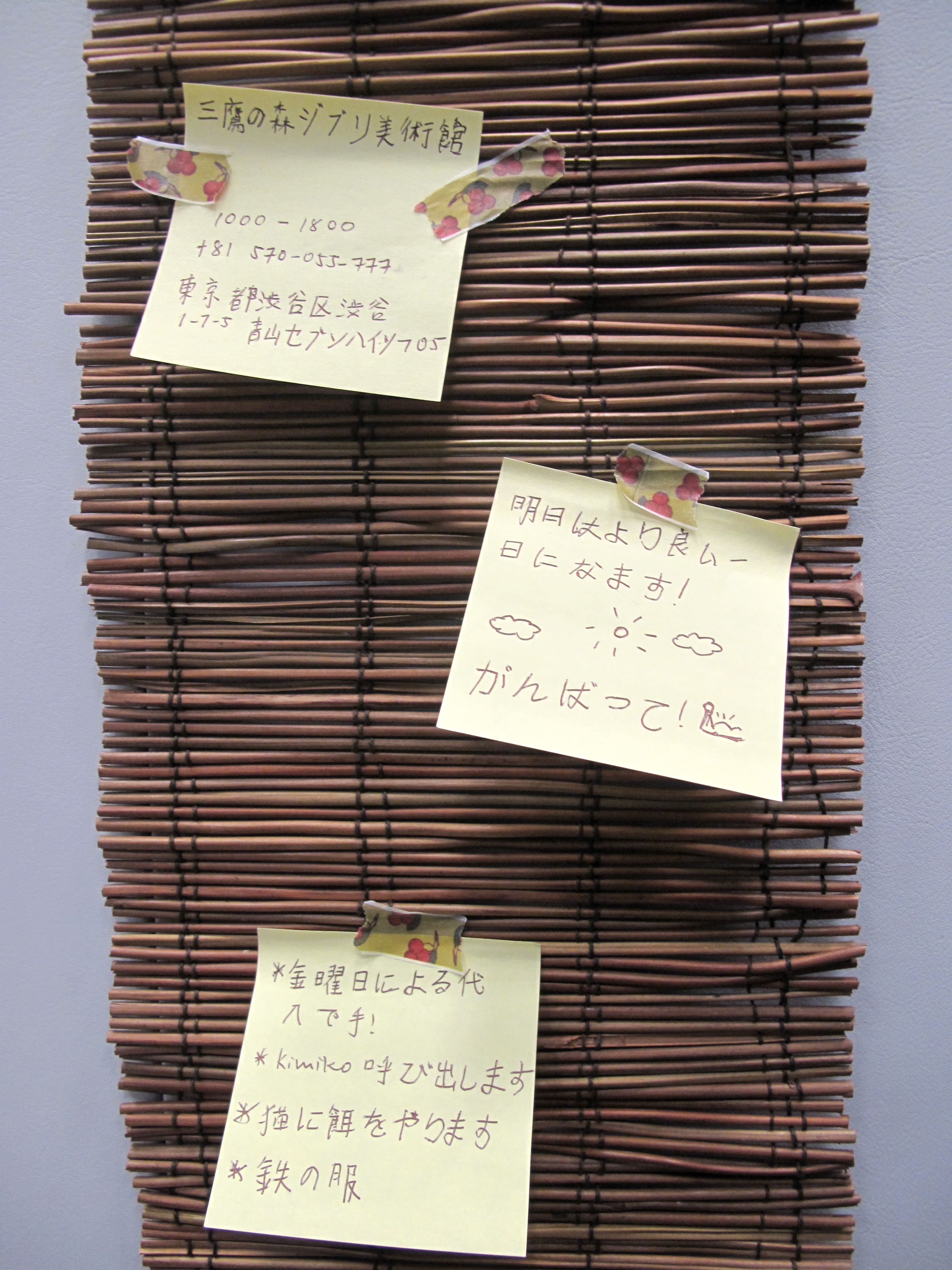 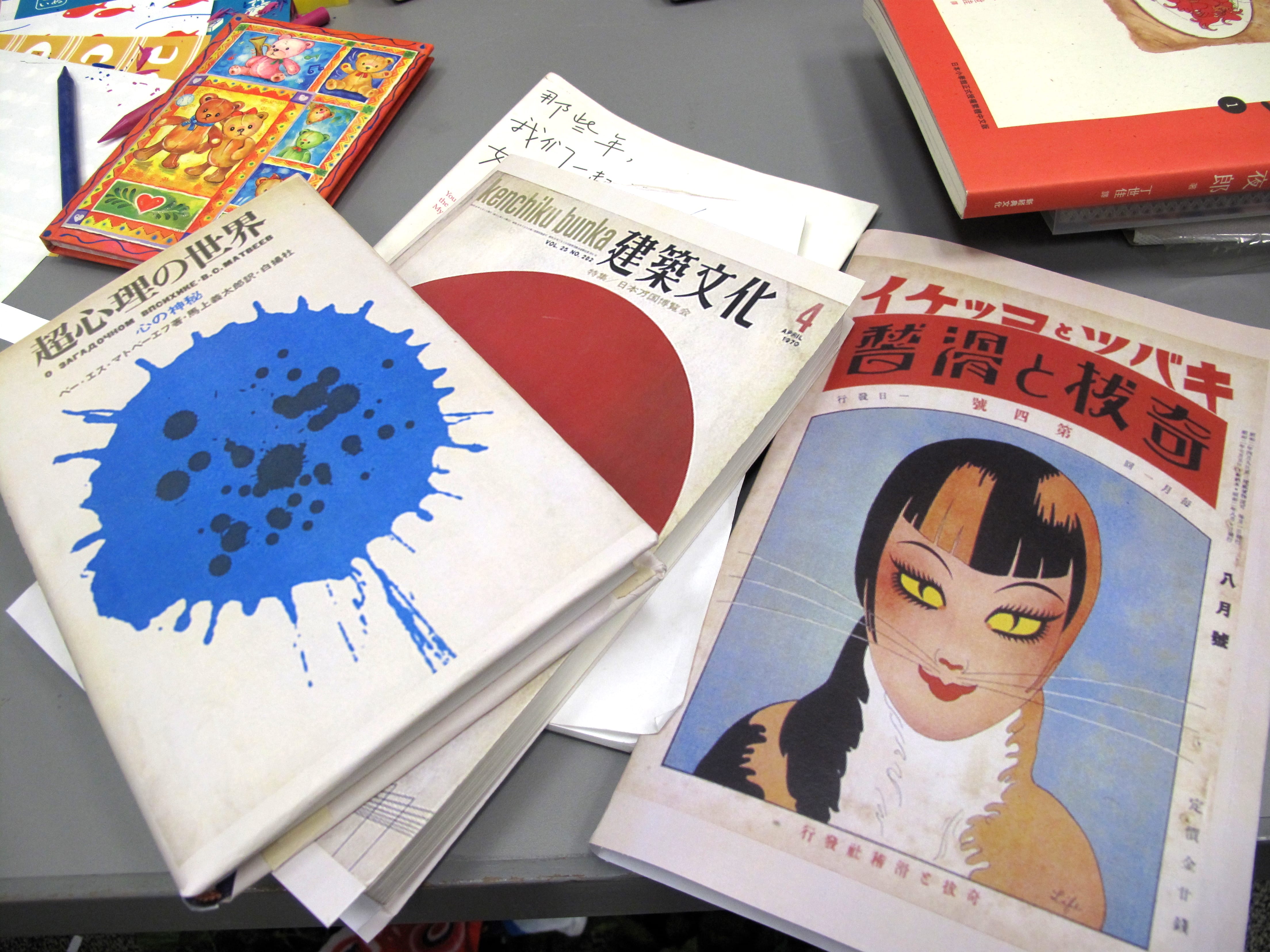 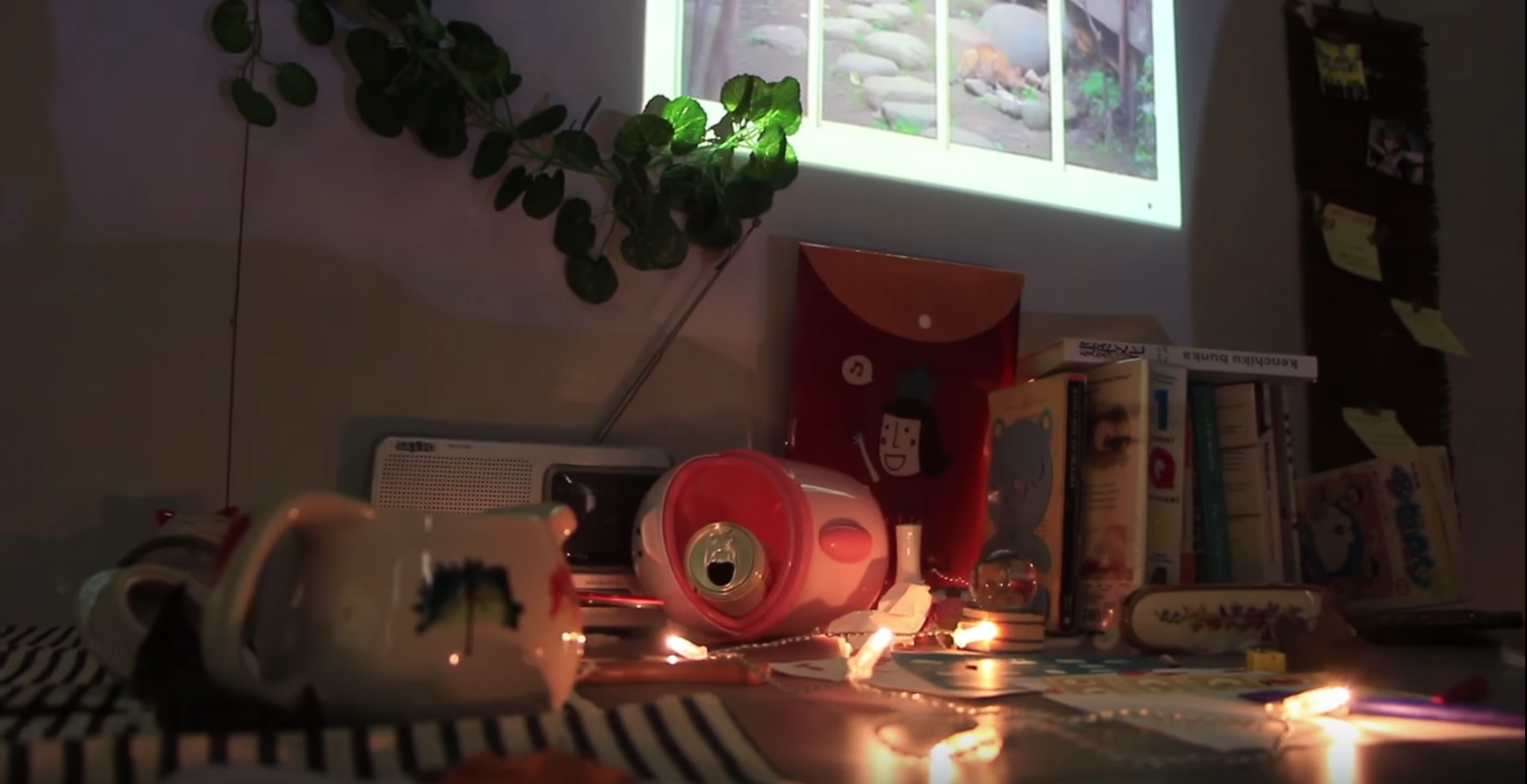 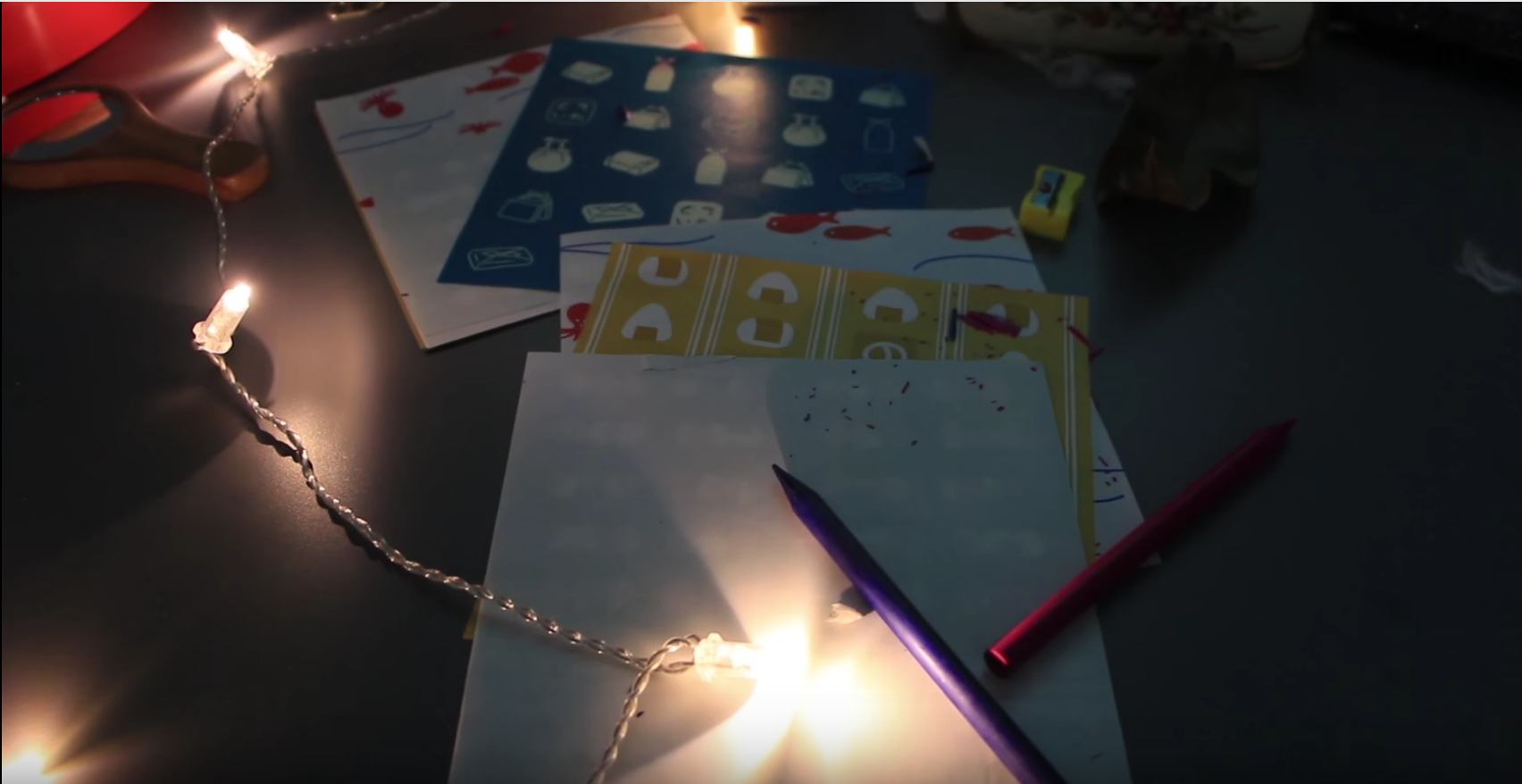 Personal items were scattered across the table to reflect the aftermath of Fukushima earthquake. Books relating to life, death and psychology tells us how emotionally affected she was for living within the nuclear zone where natural disaster could easily struck. Also, you could see photos of her with friends hanging right under the window. This portrayed her to be someone who is warm and cherishes her loved ones very much. A childhood photo album laid beside the table, leaving trails of her memories living in this room since young.

We casted a window above the study table, showing a Japanese street view outside. This helped to emphasize on the context, as well as adding more realism to the room. It also provided an alternative light source to bring attention towards the study table. 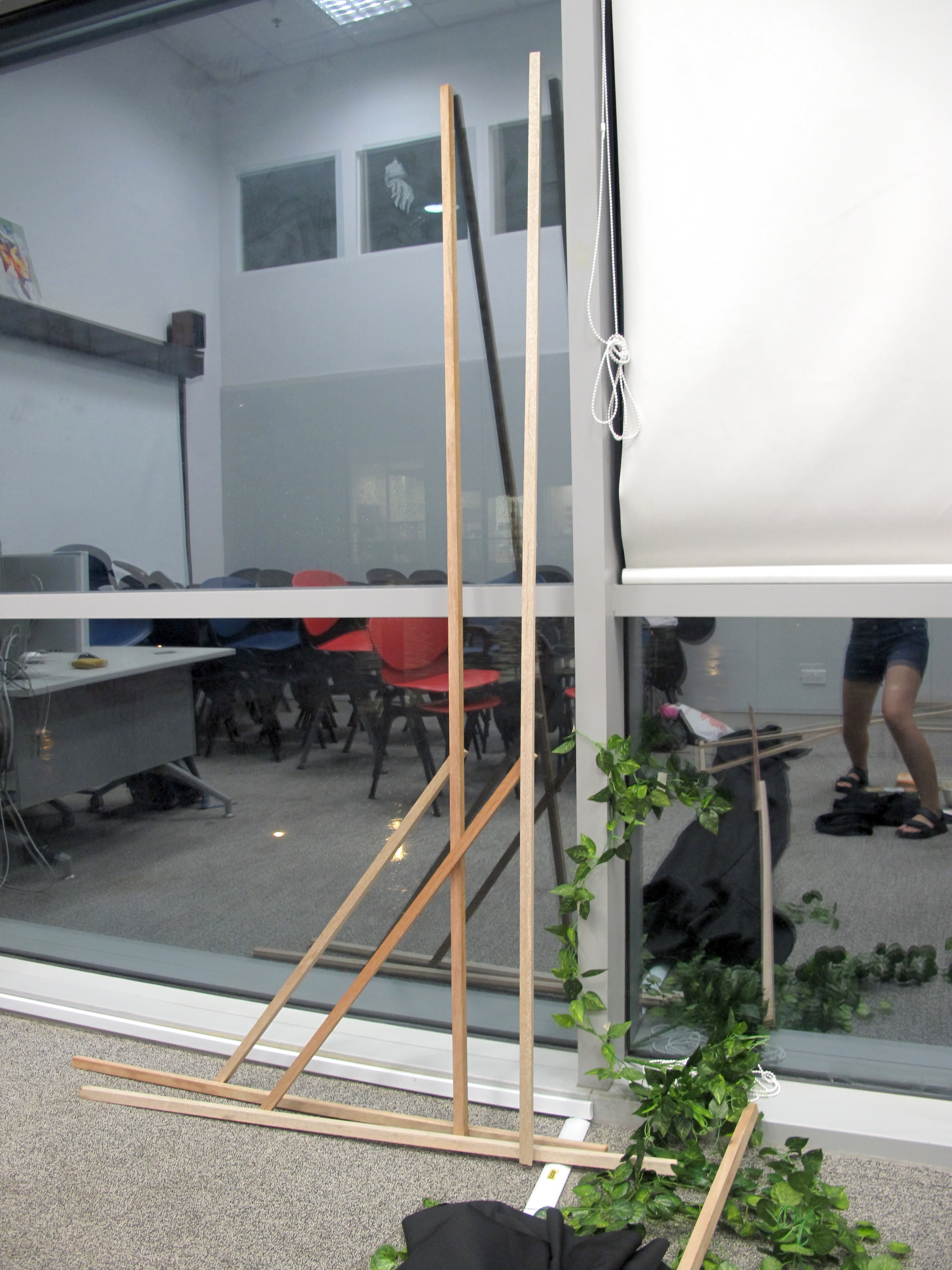 We decided to scale down the classroom by half, to how a regular bedroom would look like. The use of black cloth darken the room, provoking a sense of mysterious. Due to the limited budget and resources, we dug out wooden planks from the 3D studio and black cloth from the student club storeroom to construct the partition.

Using the fairy lights, we aim to draw attention to the specific areas (mainly the study table and bed) amidst the chaotic room. 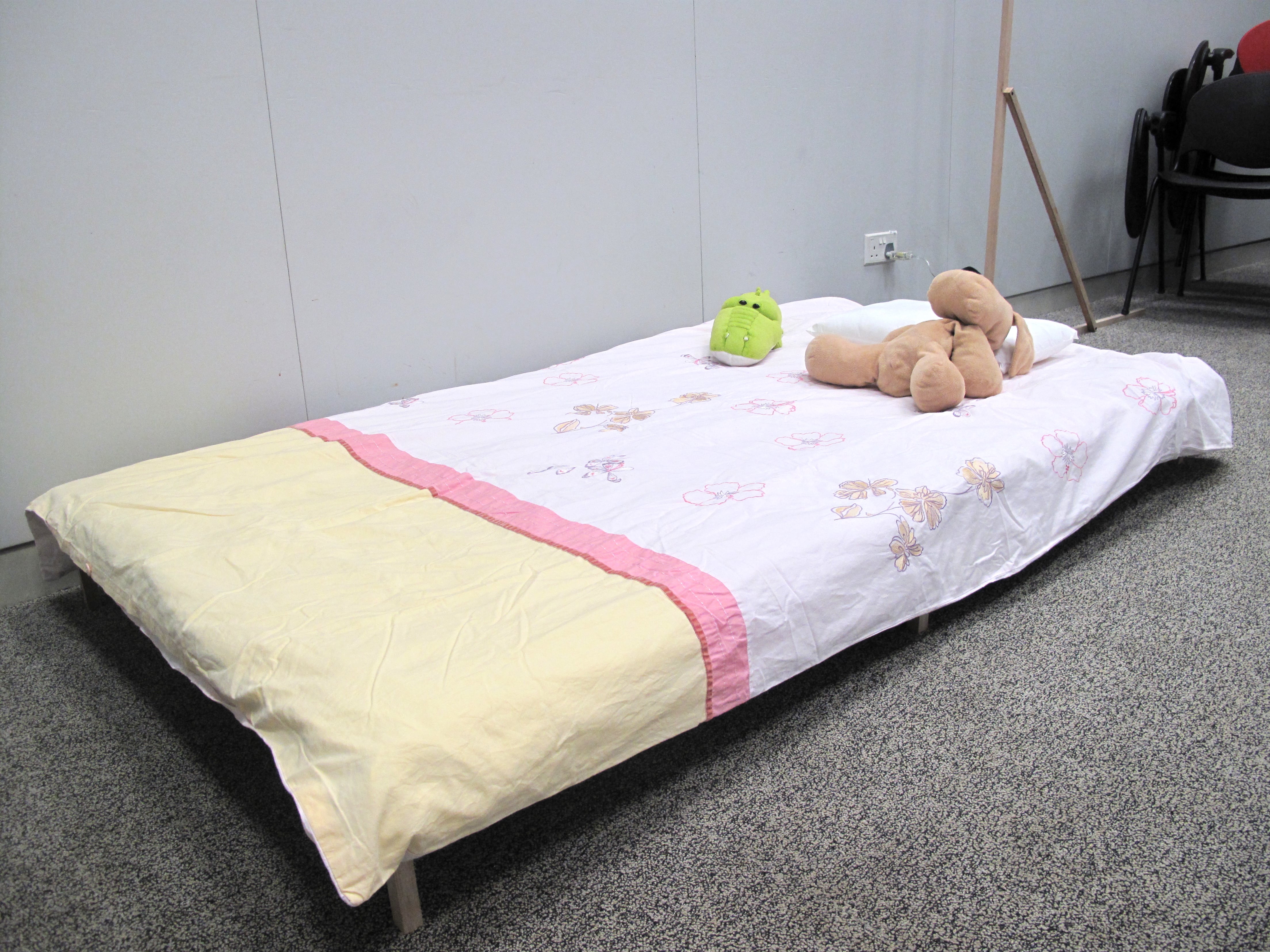 To enhance the ambience of a bedroom, we all decided that a bed was necessary. However, we could not find a bed frame and bed that we could easily bring into the room, thus we had to make one by ourselves. Same thing, we gathered wooden planks from the 3D studio and constructed a simple frame that was sturdy enough to hold a quilt as a thin mattress, but definitely not for use. We used a quilt to lay it over, supported by a huge wooden board used as a backing for Foundation Drawing classes.

Pillow and soft toys were added to make it more real and personal, further enhancing the persona of the girl who used to live there together with food wrapping and a book. This also ties in well with the slight messiness of the room. There was also a small broken wooden chair toppled over next to the bed to add on to this. 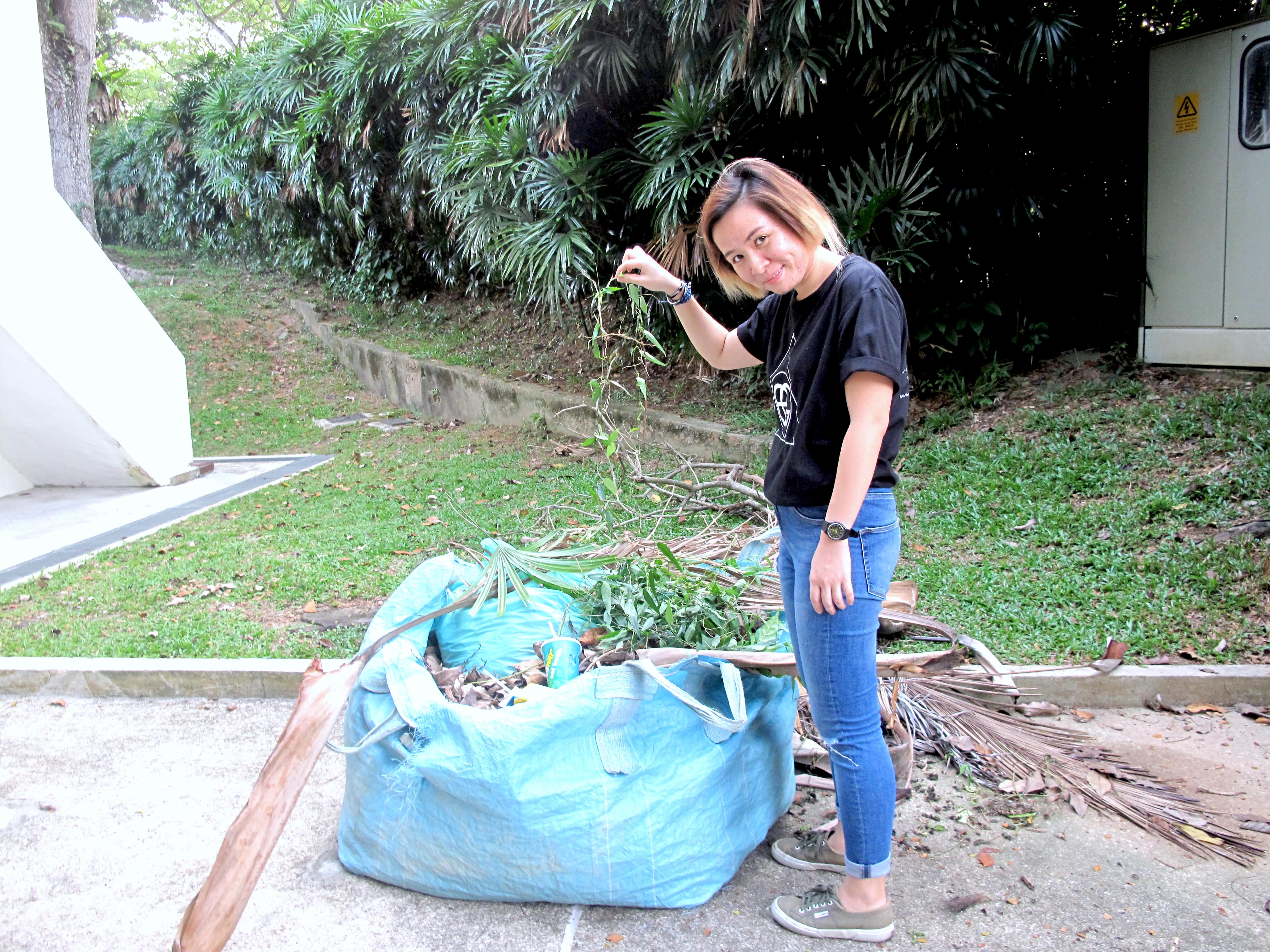 We used vines that seem to grown from the entrance and under the bed to show how nature has taken over and flourished with the absence of human. They suggest the overgrowth of nature from outside into the house. Dried leaves are also littered around the floor as a signifier that time has passed and also add to the deserted and disaster theme.

Here is the video documentation to bring you through our process and final installation: