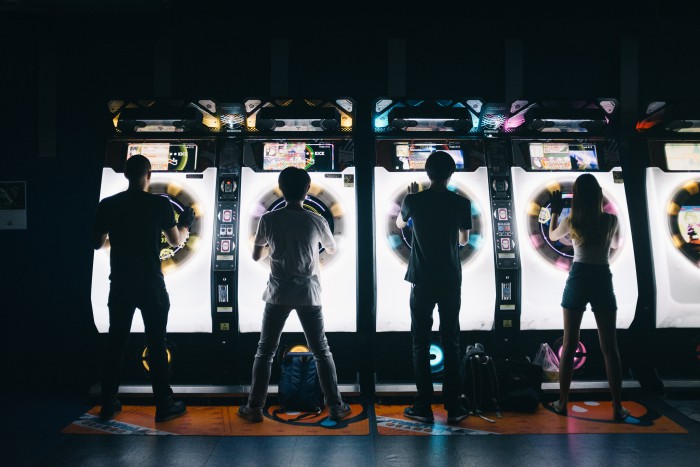 The first image of the series is my self portrait. I feel that most of the time I tend to be in my own world, where I ignore the presence of everything around me. I used a slower shutter speed (1/8th of a second IIRC) to make the people around me blurred out while I am in focus. For the second image, I wanted to show my love for collecting CDs. My favorite thing about collecting CDs is the fact that each CD contains a unique memory of myself finding that CD. It’s not like downloading music nowadays; people don’t go, “Oh! I remember downloading this at ______!”

The CD I chose to showcase is titled “Late Registration”, by Kanye West. I had been looking for this CD for a while, and one day I decided to go down to my regular CD shop to see if the guy had it. When I reached the shop, the owner looks at me and says, “Hey, I have something that you’ll love”, and lo and behold, it’s the EXACT album I was looking for, completely new. It is because of that memory that I will hold this CD dear to me. The last image portrays my love for street photography. I find that street photography is the purest way to see the world, and what I like about it in particular is the fact that it’s seeing the uniqueness in the ordinary.

In this photo, a child is being held in her father’s hands. In this intimate moment between father and child, she has noticed my presence, therefore sharing her moment with me. I may not appear in the photo physically, but my presence is etched in the photo by her looking at the lens, and therefore, looking right at me. The object that I chose to portray in this series is a deck of playing cards. One of my hobbies is the art of shuffling playing cards, otherwise known as cardistry. The shot of me holding the deck of cards shows that this hobby isn’t about me. When I first started learning cardistry, people would make comments about how I am only learning this to showoff to others. My face is blurred to tell people that I am doing it because I like it and not to show myself off to others. The rest of the images showcase the different type of displays and movements that are involved in a typical card flourish. One is a static image of a card fan taken close-up to showcase the patterns that the cards make, and the other involves a kinetic element to it; one packet of cards is spinning while the rest are stationary. I think both images serve their purposes well. In this series, I wanted to show people what I like about video game arcades. I like how the place is usually dark, and the only thing lighting up the place are the arcade games themselves. It gives a very unique vibe to the place, and that was what I was trying to capture. Also, I like that there’s an invisible sense of camaraderie in an arcade. Even though everyone doesn’t know each other in an arcade, everyone knows that they’re all there to have fun, so there’s a certain kind of connection that everyone forms with each other, which you can only feel if you’ve spent a lot of time in an arcade, in my opinion. You could say that this series is my labor of love to video game arcades, and I hope they will continue to exist as long as possible. I learnt that multiple images can tell a single story, even though said images might not seem relevant to each other at first glance. I also came to realise that the way you assemble your photos in an exhibition can add to the message that you want to bring across as well. Overall, I really enjoyed this exercise and wouldn’t mind doing it again.