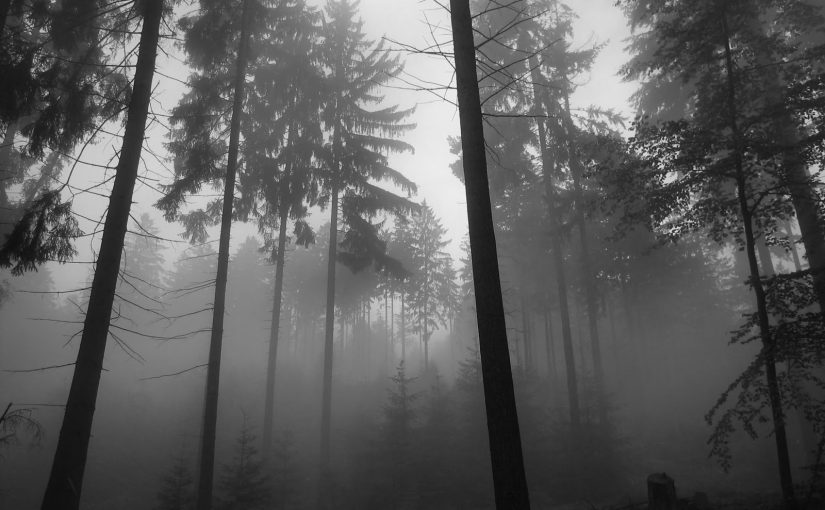 My soundscape illustrates a person walking through a forest but encounters a mysterious object or sound that ends up chasing after him. I layered a combination of sounds like the forest ambience, footsteps, breathing, rustling of clothes and belongings etc. I also wanted to create a sense of movement and anticipation as the person tries to escape from the mysterious sound by starting the scenario slow and building up towards the climax.

After getting the brief for the project I don’t know why but the idea of thriller/horror stuck to me. I love the use of sound effects in horror movies and the sounds were what often ended up making a greater impact on me than the visuals.

In this video, I reference The Revenant and the usage of sound to build up towards the climax ( which was the bear attack)

Afterwhich, I made a list of sounds that I needed to record as well as the arrangement of sounds. 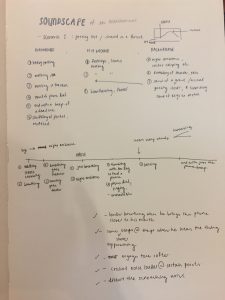 All of the sounds I recorded were done in hall at around 1am? But there were still a lot of people awake and walking about. The zoom recorder was so sensitive that it was able to pick up doors slamming and chattering from a few blocks away. Hence, isolating and recording the individual sounds were one of the challenges for me.

The ambience sound was probably the easiest to record and given that my hall was in a hilly and forested area, I just needed to go to an isolated area away from other noise disturbances. For the breathing and walking sound, I got my friend to walk about on a patch of grass and got him to vary his footsteps, faster, slower, etc. I wanted to use a combination of sound to create the illusion of running, hence I used a T shirt to rub against the mike of the zoom recorder and hit a bunch of hangers on the drying rack which I thought gave off a really nice sound of movement. As for the “mysterious sound”, I ended up scratching my nails on a metal pole to create an eerie screeching noise. I thought it was appropriate as it was a sound that makes the hair on the back of your neck stand and gives people goosebumps, which was what I wanted.

Another challenge I faced was probably the layering of the sounds. I started off the scene slow with minimal sounds and slowly build it up towards a loud symphony of sounds as the person is running away from the mysterious object. I ended off with just the ambience of the forest to create a feeling of eeriness. However, the layering of sounds proved to be pretty difficult as I had to be mindful of the background, middle ground and foreground and I had to vary the volume of the individual sounds if not it would just end up messy and disorganised. I also had issues with the transition between sounds. I wanted a “pause” in the middle to create some tension but I wasn’t sure if it ended up coming off as awkward. 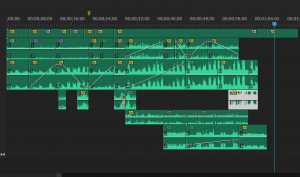 This project has been really interesting for me and I have learned so much about sound. I could say that I prefer sound production than video production now 🙂