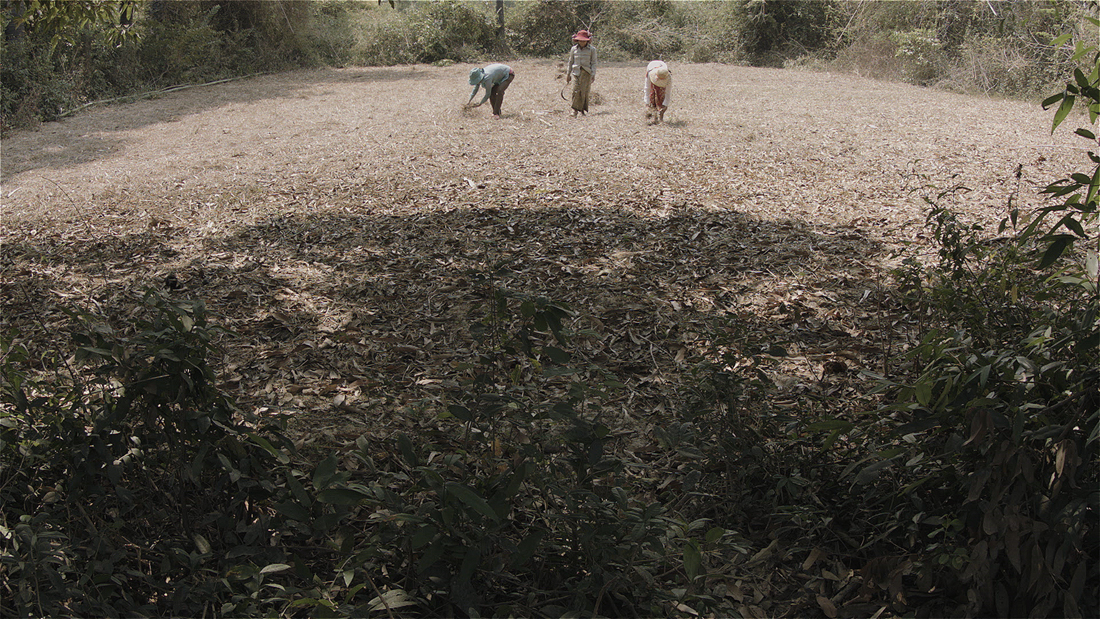 The exhibition was a rather eye opening experience for me as I find the social political context that most of the works were dealing with was rather interesting. The dissonance between the past and present was often highlighted in the works and how the factor of time affects people and communities. I especially loved how comparisons could be made across works as to how a drastic event in the past affect different communities and how these communities dealt with them.

One work that particularly struck out to me is Vandy Rattana’s Monologue, which largely discusses the effect of time and how it wears down on the significance of events or symbols. The context behind Monologue is a rather interesting one as the artist receives a map from his father which marks the location of an unmarked grave between two mango trees. While sounding like a murder mystery at first, it was later revealed that the man was possibly a victim of a mass killing during Cambodia’s communist era as his body was found not far away from an unmarked mass grave. The dissonance between generations of Cambodians living during or after the Pol Pot regime was rather evident through the dialogue between the artist and his unnamed compadre. Through the monologue of the artist, addressed towards the person in the grave, we were informed that the artist had seen at least seen a photograph of the mysterious man although we ourselves as an audience were not shown this. In addition, instead of sympathising with the man for his tragic passing, Rattana scolds him in a harsh, condescending tone, giving off an air of disrespect towards the deceased. While shocking, his actions are not far off from how the Cambodian community are treating the deceased. It was later revealed how the area of the mass graves have turned into rice paddies for farming are still being used for that purpose, highlighting the indifference of the modern day Cambodians towards the victims of the horrible past.

And the end of it, many questions were still left unanswered in the film. Who is the person in the grave? How did the artist’s father know about him and does the victim’s family know about the location of his grave? Did they even try to find him? Taken onto a larger context though, the same questions can also be asked about every one of the 5,000 bodies found in the mass graves that were left forgotten over the years. While the anonymity of these victims is a rather distressing issue, one also tackle the issue that acts of respecting the dead compromise that of the still living. Should the livelihood of the rice farmers and the communities which feeds off the rice that they plant over the graves be heavily affected when the plot of land is to be turned into a proper burial area or monument?

I loved how for most of the works and the communities involved in them, the significance of certain things, events and people although have died down, but are never truly forgotten. There is always a sort of a new “life” growing from a physical and symbolic death under the effect of time. One could infer that rice plants and the mango trees could grow and flourish due to the nourishment provided by the bodies buried underneath them. As such, it can be argued that there is always progress in time and the dead in some way or another, will always still contribute to the next generation.

p.s I find it amusing that even the work itself is an example, the death of an unknown person once recorded on a hand-drawn map eventually became that of a 18 minute video to be shown on art galleries.