A senior said that she usually takes public transport around, has meals at hawker centres and wonders around casually. Even though she goes to shopping malls, things are too expensive and it is crowed during peak hours.

A student said that he has very busy school life and many classmates worked very hard. They were finding balance between school and cca, waking up early and staying up late.

Seeing so many ongoing construction everywhere made me wonder:

How the old buildings co-exist with the modern architecture?

So I went on to research on news on construction in SG as well as preservation program by URA (Urban Redevelopment Authority).

Some of the questions popped up while I was researching:

What’s relationship between the place and people with so many new buildings coming up?

What do people feel about the old and new buildings?

Then I thought of the Singapore Red Dot Museum and that it was a Colonial-era building so I decided to work on that and did some research…For me personally,this is the place where I started my design journey. Almost four years ago, and as I went there several times more, I found it very fascinating. The bright red color of the whole building makes it distinguish from the street.

Red Dot Museum is the first contemporary design museum in Asia and is housed in the former Singapore Traffic Police Headquarters, a colonial-era building. It was converted in 2005 into a creative hub known as Red Dot Traffic, whose facade was then painted in its now signature red hue. Besides the Red Dot Design Museum, the Red Dot Traffic building also houses food and beverage outlets, creative agencies and a bar.

The building was given conservation status by the Urban Redevelopment Authority in 2007.

Progress does not always have to mean that all things need to be shiny and new. A passion for the past, a bit of imagination and some careful reinvention has allowed some of Singapore’s conservation buildings to take on new lives through adaptive re-use. 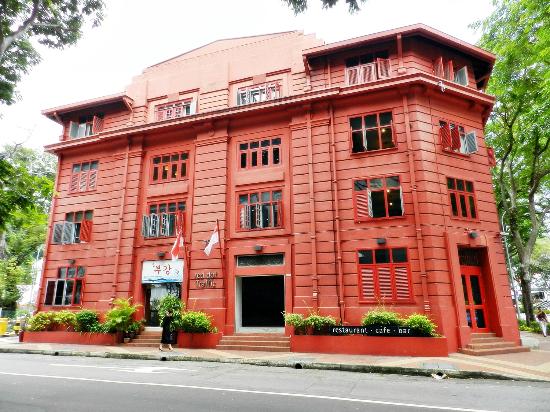