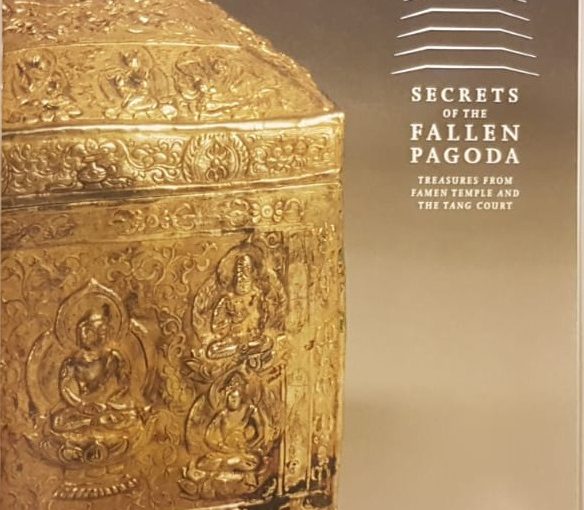 Review of Gallery Guide: Secrets of the Fallen Pagoda

With the review of the gallery guide of the Asian Civilisations Museum, Secrets of the Fallen Pagoda: Treasures from Famen Temple and The Tang Court, our group aims to explore how articles are being presented in a guide to aid visitors in the museum and how they enlighten them on the articles of interest; and henceforth point out strengths and weaknesses in the gallery guide, allowing us to further enhance our own gallery guide to better appeal to our targeted audience — rich patrons.

Secrets of the Fallen Pagoda is a catalogue which serves as a guide to an exhibition at the Asian Civilisations Museum, discussing articles from the Famen Temple crypt and other Tang dynasty artworks. The essays within the catalogue scrutinize relic worship at the Famen Temple and Tang’s Buddhist world, the reasoning for the arrangement of donations in the crypt chambers, and the Tang dynasties’ interactions with the global world. The catalogue aims to enlighten visitors on the narratives on life and Tang’s culture and heritage via ‘figures and murals from tombs, magnificent reliquary boxes, rare ceramics, and gold and silver metalwork’.

A)  Historical context of Tang China

C) Objects from the Famen Temple crypt: Map of the Pagoda, and two more objects that could be found in the crypt

Strengths of the gallery guide

As the gallery guide is targeted at the general public who have come to view the exhibition, the guide focuses on providing a broad overview of Tang China and what its cultural heritage was like, together with a variety of different objects that could be found in that era.

Historical context is provided for the visitor who may not have had the knowledge of what Tang China before visiting the exhibition. It aids in the enlightenment of the general visitor of the time period and what items where present in the Famen Temple crypt; this creates a strong foundation for knowledge to be built on as the visitor goes through the exhibition.

The gallery guide then presents its first two articles of interest: Funerary Figures. This a good introduction to the artifacts that could have been first seen at the historical site. A general summary on the figures and their functions are also provided under this sub topic.

This is followed by a map of the Famen Temple crypt, as well as two objects of high importance to the site. The map enables the visitor to visualize the Temple Crypt and where the objects in the exhibition could have been located in. The two objects are summarized to have been placed in the most important locations of the temple; a clever choice of objects to focus on.

Religion (Buddhism) is then discussed to provide a cultural context of Tang China, paired together with a focus on a religious article. This provides a base reasoning for the appearance of religious objects that were on display in the exhibition.

The last part of the content in this gallery guide is filed under the name ‘Cosmopolitan Tang’, featuring a variety of objects from the Famen Temple crypt, with some that may have been of foreign origin. This helps to give the visitors a rundown of the different objects that had been placed in the cyrpt.

Weaknesses of the gallery guide

The gallery guide provides a good rundown of history and culture of Tang China, and a fundamental background for the objects, both in the exhibition as well as those in the guide itself.

Unfortunately, as the guide is targeted at the general public, the focus on the objects are very broad and only provide the bare minimum of knowledge on the objects. The rough visual and contextual analysis provided with each object in the guide also seem to be an reiteration of the statements found at the exhibitions as well.

With regards to aesthetics, the gallery guide presents chunks of text and pictures of objects on the side. It is simple and readable, but lacks a certain level of engagement with the reader.

As a general gallery guide, Secrets of the Fallen Pagoda: Treasures from Famen Temple and The Tang Court serves its purpose well. However, when it falls short when it comes to engaging the general visitor with objects mentioned, most likely due to it having a broad and vague targeted audience.

As aforementioned, appealing to the targeted audience is important. As our group will be focusing on rich members of the public who would most likely be the ones funding museum openings and exhibitions, we aim to create a gallery guide that is appeals to them and enlighten them on the objects in the gallery beyond the general level.

We would ensure that the appearance and aesthetics of our gallery guide would pique their interest on first sight, and design the layout to match their tastes. The content of our gallery guide will also be planned in a manner that is enjoyable and engaging to read, together with information on the objects that would enlighten them greatly.

One thought on “Review of Gallery Guide: Secrets of the Fallen Pagoda”