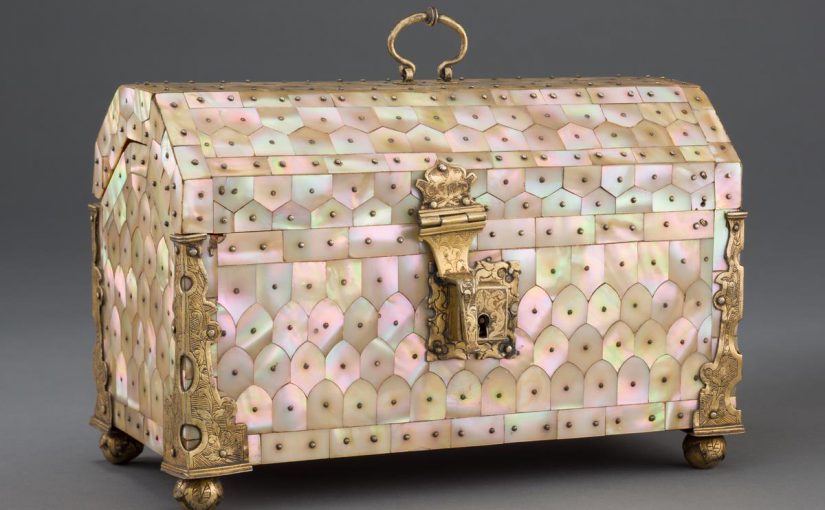 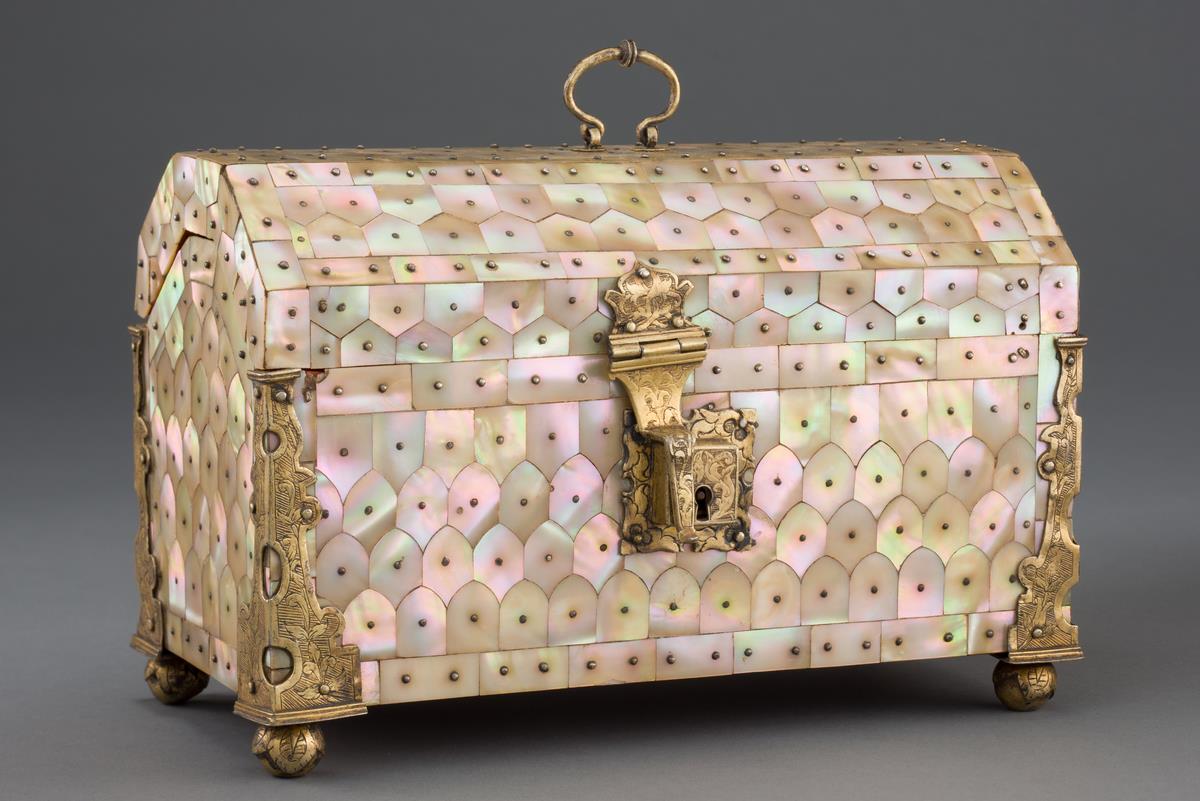 Long Term Goal:
Further analysis on the use of mother-of-pearl in the context of noble/royal families, and research on what type of items were stored in the casket and similar objects (valuables, jewelry, reliquaries for religious items). Exploring the possible thought processes behind the use of mother-of-pearl by artisans and craftsmen, or the influences and motivations behind the commissioner who requested for mother-of-pearl objects to be made. With the information gained, connections will be made between the functions of the casket and similar objects of the modern era. Drawing such connections will in return, allow the targeted audience to understand and have a feel for the casket.

The casket is made of teak and covered with mother-of-pearl plaques held in place by small gilded silver nails. The lock is made with openwork silver, with leaves and scrolls. The central plaque is embellished with engravings and niello, of rich floral motifs. One of the most attractive aspects of this piece is the magnificent quality of the mother-of-pearl plaques which have a natural pinkish-blue hue. The finely engraved gilded silver appliqués on the sides are later added and exhibits a strong European influences. This casket may have been made to store valuables such as jewellery, but were sometimes also used as reliquaries for religious items.[1]

The Portuguese in India were the first of the European colonisers to appreciate the skill of Indian craftsmen and sponsored an export trade in works of art, very often copying European originals. They catered in particular for the vogue in 16th-century princely collections for objects – gaming-boards, drinking vessels, ewers and basins, caskets and even shields – decorated with oriental mother-of-pearl set in black lacquer, which were often given mounts of precious metal. Caskets such as this were particularly in demand in Habsburg Europe as reliquaries, and many of their mounts bear the marks of Augsburg, Nuremberg and Leipzig goldsmiths.[2]

During the 16th and 17th Centuries, examples of mother-of-pearl inlaid artefacts were imported into Portugal from India and found themselves in many royal households of Europe, including Henry VIII as recorded upon his death in 1547, however few examples of comparable caskets are known to have survived. One such small chest is in the Ashmolean Museum, and the Victoria & Albert museum exhibited an example in the 1986 during an exhibition titled “The Indian Heritage: Court Life and Arts Under Mughal Rule’. Traditionally made in Gujarat from the shell of the Turbo marmoratus, a nocturnal snail, these beautiful objets were also highly prized by the Mughal Emperors of India.[3]

Jan Huyghen Van Linschoten in his ‘Voyage aux Indes Orientales’ writes about the Gujarati artisans in the 1580’s ‘They make also al sortes of deskes, cubboards, coffers, boxes and a thousand such like devises inlaid and wrought with mother of pearl which are carried throughout al India, especially to Goa and Cochin, against the time that the Portingals Shippes (come) thether to take in their lading’.
Mother of pearl fashioned from the shell of a nocturnal snail ‘Turbo Marmoratus’ was a favoured material at the Mughal court. These luxurious, exotic articles were made in Gujarat in western India and equally prized in the Indian and European courts. The Portuguese commissioned many articles exporting them to the Middle East and to Europe as precious novelties, and they were often prominently featured in ‘Wunderkammer’. The Dresden ‘Green Vault’ still preserves examples from the 16th and 17th centuries. Although produced in traditional Western shapes, the delicate mother of pearl articles were never intended to be used for anything other than ostentatious display.[4]

Although this casket is not dated or signed, it can confidently be said to have been made in the mother-of-pearl workshops of Gujarat in western India about 1600. At that time, Gujarati mother-of-pearl articles were being made for local consumption as well as for different export markets, including Ottoman Turkey, the Middle East and Europe. In those regions, articles in mother-of-pearl were avidly collected and prized, due to their luminescent and lustrous surfaces and the beauty of their design.[5]

In the sixteenth and seventeenth centuries, Gujarat, in western India, was the centre of production of a range of articles decorated with or fashioned out of mother-of-pearl. The principal appeal of mother-of-pearl, a substance found in thin layers on the inside of certain shells (most particularly Turbo marmoratus), lay in its lustrous and iridescent surface. Articles made from the material reflected light and glowed in pretty shades of pink and green. The material was also versatile; it was sufficiently strong and stable as to be applied in pieces over a wooden carcass as a veneer, or could be used alone in the construction of smaller articles such as bowls and cups.

Gujarat is first mentioned as the centre of mother-of-pearl work in 1502, in which year the King of Melinde, on the East Coast of Africa, presented Vasco da Gamawith ‘a bedstead of Cambay, wrought with gold and mother of pearl, a very beautiful thing’. In the European context, Indian mother-of-pearl first makes its appearance in Portuguese royal collections. A list of Manuel I’s (1469-1521) wardrobe made in 1522 included, among other things, ‘a casket from India inlaid with mother-of-pearl with eighteen sheets of silver’, while in 1529 Francis I of France (1494-1547) purchased a chair and bed made in India, which were ‘marquete a feillage de nacle de perle… vernissee de noir et enrichie de feuillages et figures dor’.

Gujarati mother-of-pearl can be classified into two groups. The first, to which this casket belongs, consists of articles made of wood and covered with a dark mastic inset with pieces of mother-of-pearl in vegetal, geometric and, less frequently, figurative designs. The second group consists of objects which are either constructed entirely from pieces of mother-of-pearl; or constructed of wood, entirely overlaid with pieces of mother-of-pearl. A physical examination of the objects themselves suggests that the two groups were influenced by one another and possibly even made in the same place; similarities are evident not only in the forms that were manufactured, but also in design and methods of construction. That there exists a small group of objects that has both mastic-inset and overlaid mother-of-pearl decoration also suggests that craftsmen working in the two techniques collaborated or deliberately worked in each others style.