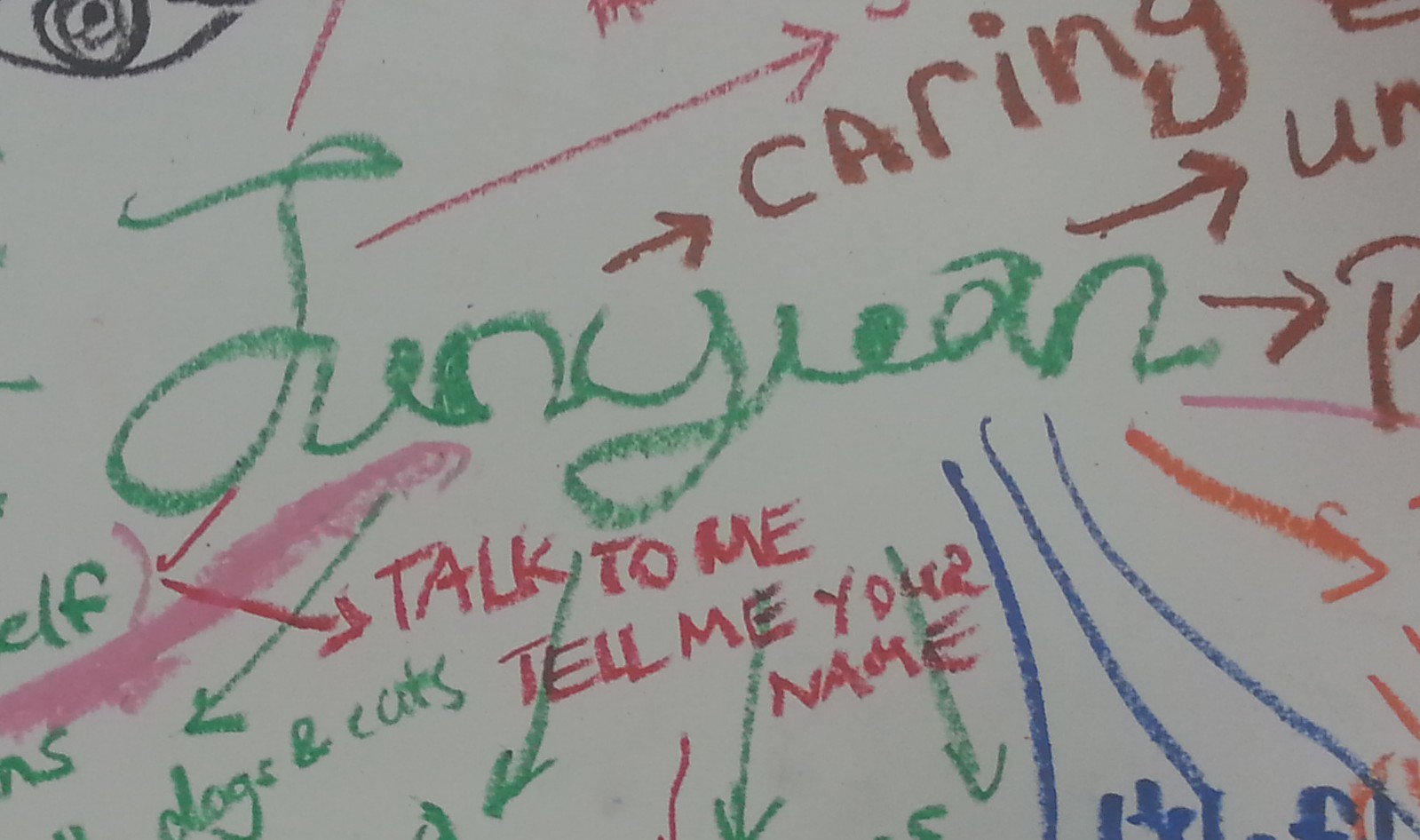 Okay maybe just because I’m a little late for my project 2 wrapping up. {That featured image looks desperate to let everyone know who wrote this post…….}

It’s the start of something new this week and Ms. Joy gave us a head start for our following project — EGO. The familiarity in G1 is just right to explore everyone’s ego and mess with them as well. I mean, we’ve been together long enough to realize everyone’s hidden side they’d never show on social media. We just can’t hide that long.

For the first activity, we got old pastel as the nostalgic to present what we know (and wanted to show) about ourselves. So, I wrote about what I liked, what I hated, what I irresistible with, what I care, what I’m confident about, and what I ain’t confident about. After a round of passing, the paper returned as this. How about my writings on others’ paper. I wrote about all I know about them and the impressions they gave throughout the semester, and what I got are the most beautiful words I’ve see about me since my arrival! Be satisfied b*tch [me]. This is so freaking encouraging that I felt good being myself. Ain’t G1 great?

So all the journey I had for the activity got concluded into point form. I repeat! Lots. Of. Inside. Jokes!

The next activity is to picture the world 5 years from now. At first I felt the world won’t change drastically in 5 years so I scaled it down and think, “My view in Singapore would probably filled up by skyscrapers because they are building a lot right now. ” Then I drew myself, in suit, probably finding a job after graduation. [Who had never try to seize the stability standardize by modern society before leaping out of the box?] This might shows the pessimistic thinking of mine, but I believe that is just a safety net keeping me from screwing up. Then I drew myself, partnering with my friends, in T-shirts, working as free (as in independent) production team. Only the clients and inspiration start our work. I considered this as my initial ambition after graduation. I’ve always envy those who are 100% in charge of their own work, and happy to do so too. Thirdly I drew a myself alone not in a suit in between. I’d probably end up someway in between my previous visions. Freelance? Part-timer? There’s no absolute in life.

Same process occurred and this came back. Ain’t great friends always put a smile on your face? Damn this is just optimism at its best. Thanks guys for picturing an exquisite future for me.

Within limited time, this is the summarize conclusion for the activity.

I was able to see more inner-self of my classmates, and understanding about their vision as well. Okay, some of the paintings ended up an opposite direction but who knows? The future might end up what they joked about. The uncertainty about future is just exciting sometimes. Lastly we had to picture the future in words. I took it serious as I think it won’t differ much from what I see in the people around me. Many friendship throughout my life faded but didn’t disappear. They just don’t shine as bright as they used to. I once believed that the common cliched reality won’t happen to me. Yet there’s a reason people keep producing ‘”so true” post on the internet. It happens, to everyone. I guess if the down side of future reality happens, we just have to improvise. But liked I said, future is exciting for its uncertainty. The list above isn’t that gray as well. Art peeps tend to create opportunities for each other and I think that will be the ones that spark excitement in my future-5-years.

The activities was fun and it’s been a while since I think about these topic sitting besides the toilet. (I thought about them on the toilet, I forgets about them after washing my hands. True story.) I like it when it doesn’t require too much brainstorming but letting my imagination run wild at the same time. It reminded me of how much I know myself and how anticipating I am towards the future. However, to integrate all of these into the EGO project, well, that’s a whole lot of process to go through. Hope it’ll be as amusing as this. There are two kinds of people in a self exploring activity.