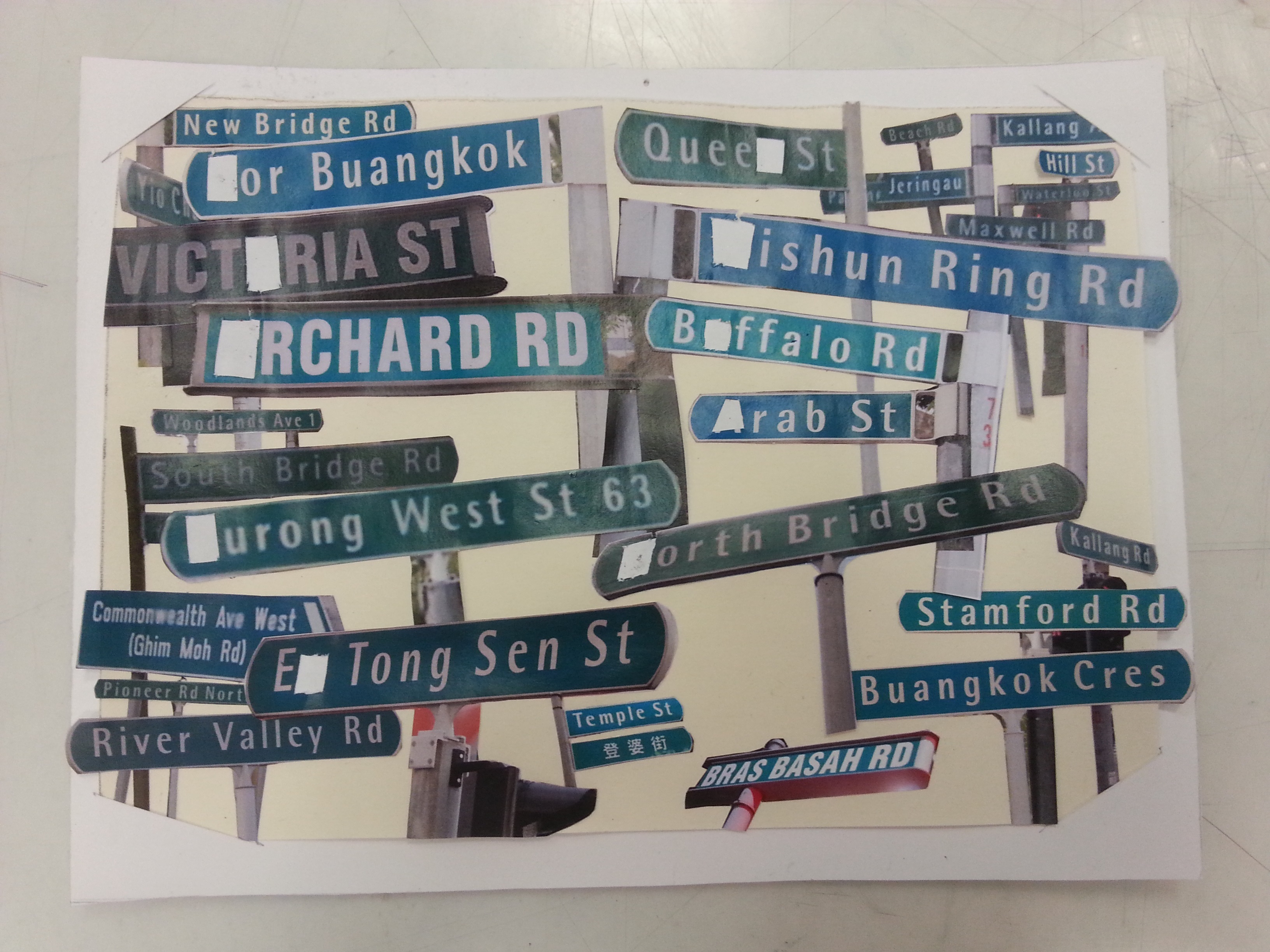 Project 1, TYPOGRAPHIC Portrait Problem has finally ended, and there goes my first presentation of the semester.

So, to make up the whole progress, I’m gonna start from where I stopped. 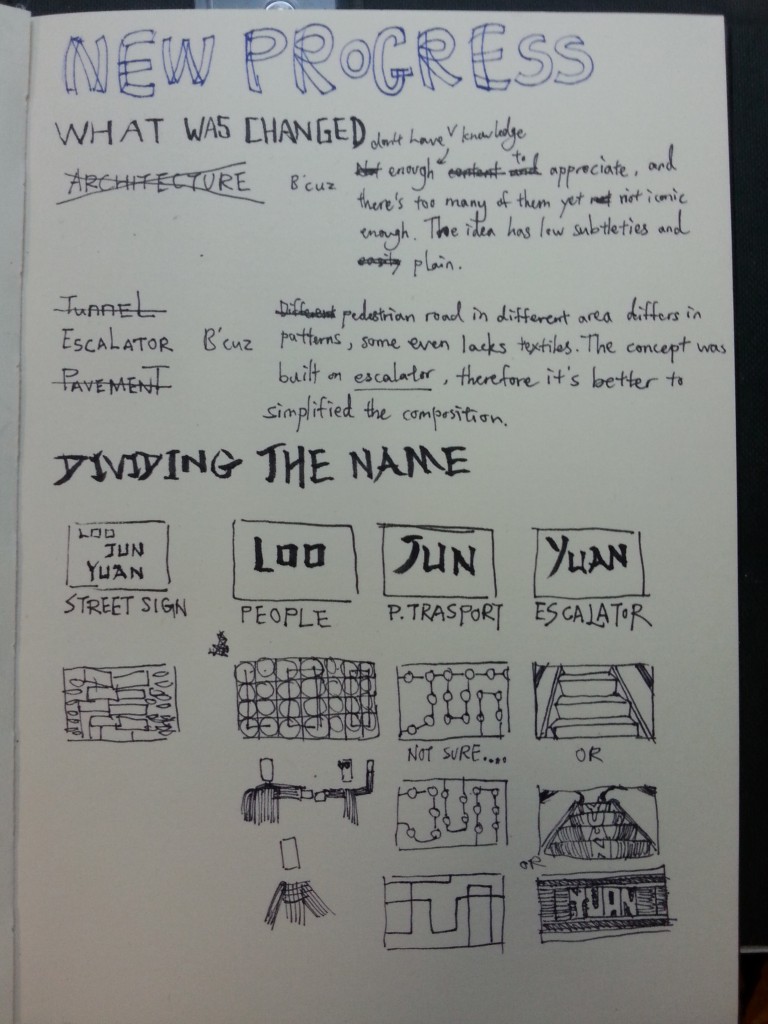 I’m not a big nerd on architecture, so I decided to stay as an interested audience of the art of buildings and cut off the composition from my set to fit the 4-frame-project. Moreover, filling up the building’s shape did not work as strong as my other compositions in terms of subtleties, and fine tip pens are not challenging enough either. Cutting away the pedestrian paths and underground tunnels are due to the potentially overcrowded components. Since its idea was started from the escalator itself, so I just simplified it as the medium is a tough tool to control as well. 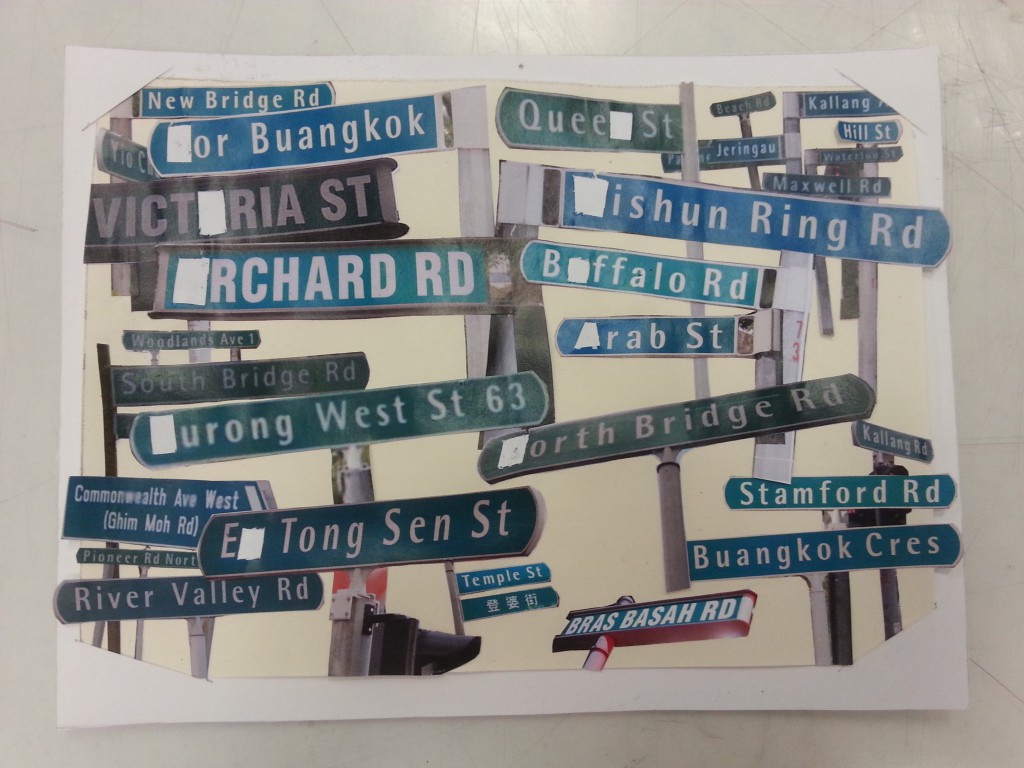 and I’m a logical person.

During my city exploration, I was unable to use internet data or GPS due to my financial restrictions. Thus, all I can rely on from getting lost are the locality maps from the MRT stations, and the STREET SIGNS on my way. This method of navigating shows my logical attributes when finding my way in the city. 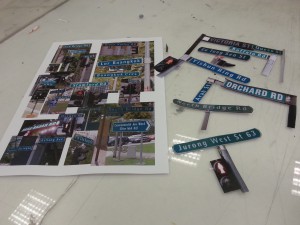 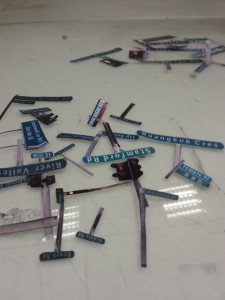 Once I am familiarized with addressing format of a town, I won’t worry about not finding the certain locations as these street signs aided me big time. Also, I think I got my directional sense from my dad, so retracing my route was never a problem either. (Unless the scale and complexity of the city was too overwhelming.) I’ve paired the idea with collage making, the medium used by DADA when they first establish. Therefore, I considered it as a form of real life photoshopping as it requires certain amount of logic to piece every component together. The street signs are chosen based on all the streets I’ve been during my stay in Singapore. Some were photographed on the spot, some were screen-shot from the blessed Google Street, therefore resulted the major difference in their brightness. To find my name, just simply spell out the missing letters that were replaced by the white boxes, and you’ll be logically reading my name, just as the piece intended to be. 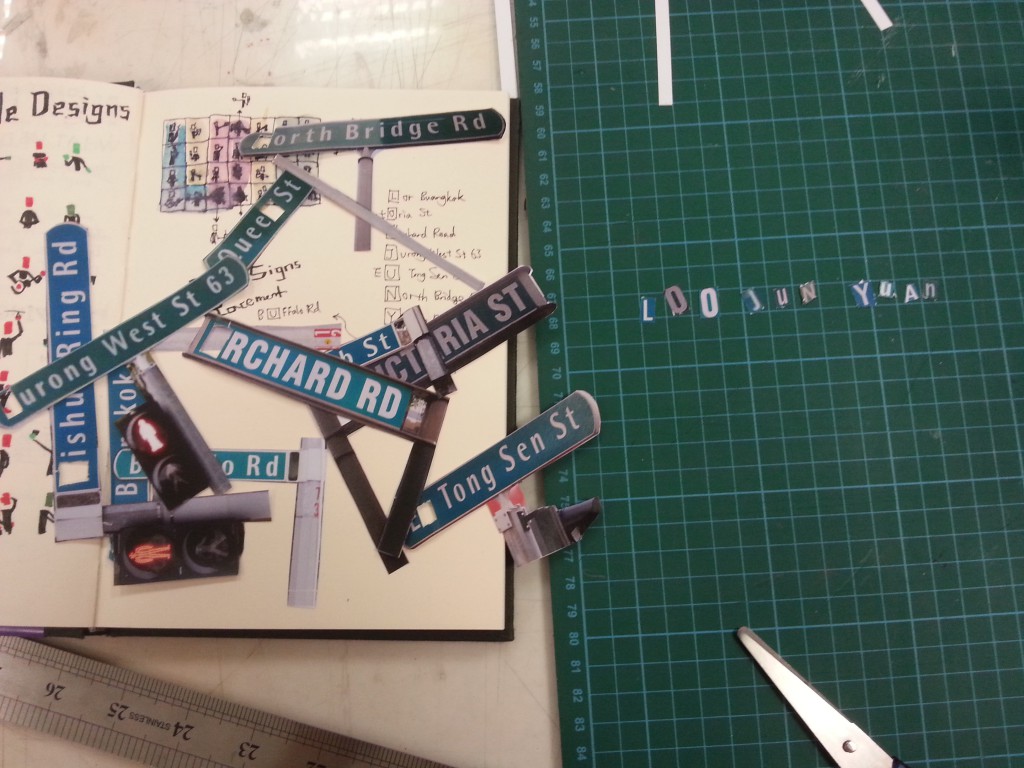 However, it certainly has flaws. From the feedback of my fellow classmates, they were distracted by the sign posts thinking that my name hide between the negative spaces. After my clarification, they liked the idea of hiding what I wanted to show in this typographic portrait. 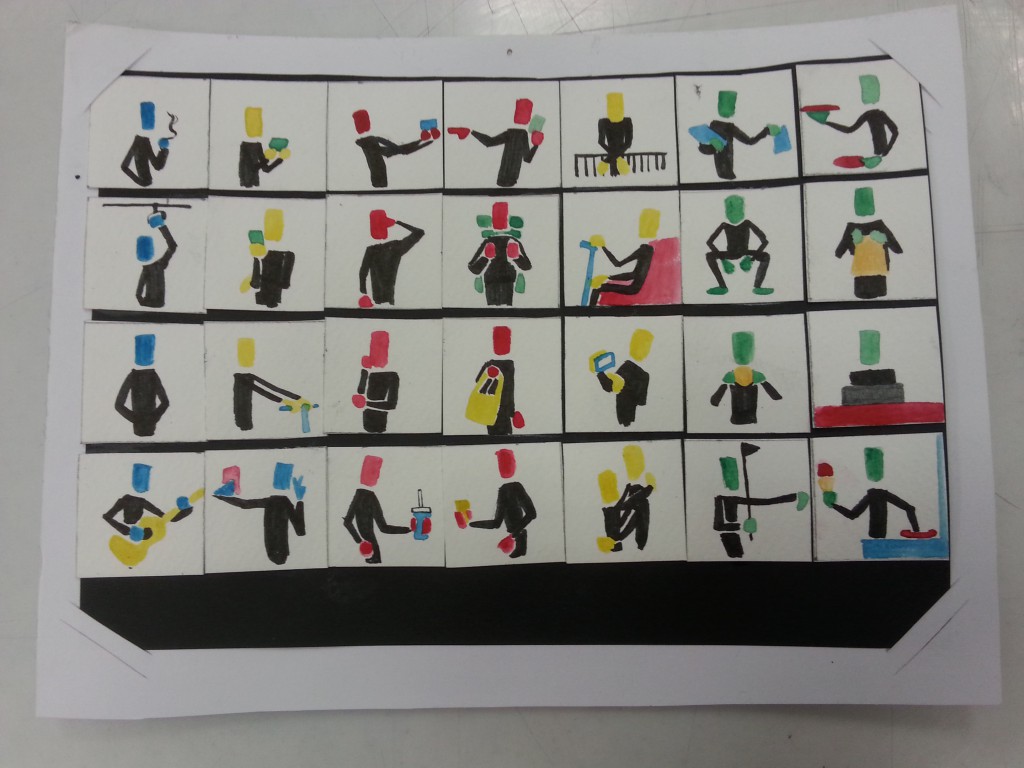 and I’m not afraid to be weird in front of the citizens.

Why the caption? This is because I often (not always) ask stupid questions when I’m exploring around the city. I am thankful to every pedestrians who’ve helped me when I was confused or oblivious about the directions. (Yes, despite how confident I sounded just now, that do happens.) 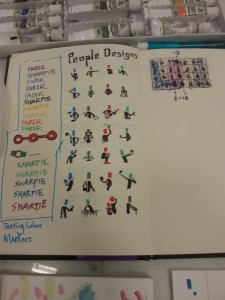 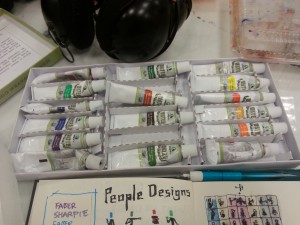 There are different faces in every trip, and I definitely can’t remember how they all look like, that’s why I chose to design them in monochromatic black-clothed figures, which symbolized how rare we meet each other again. I wanted to present many identities, therefore I scratched through all my memories on the streets, in the train, or in certain locations. The figures are designed with identifiable common gestures. There are arranged in a way that you are able to see my surname LOO for a certain distance, which achieved how unrecognizable I was in a big city. The medium I used for this piece is water color. Mistakes made by water color can be easily covered or blended out, thus suiting my piece of not afraid to ask the wrong questions. (Mainly also because I am less likely to see these individual again.)

How my classmates mistaken it as a printed work was a compliment to me, even though some have commented that this was a little out of place among my whole project. Moreover, not everyone are able to see the hidden surname in it. Perhaps a better design need to be implement for a better effect next time. 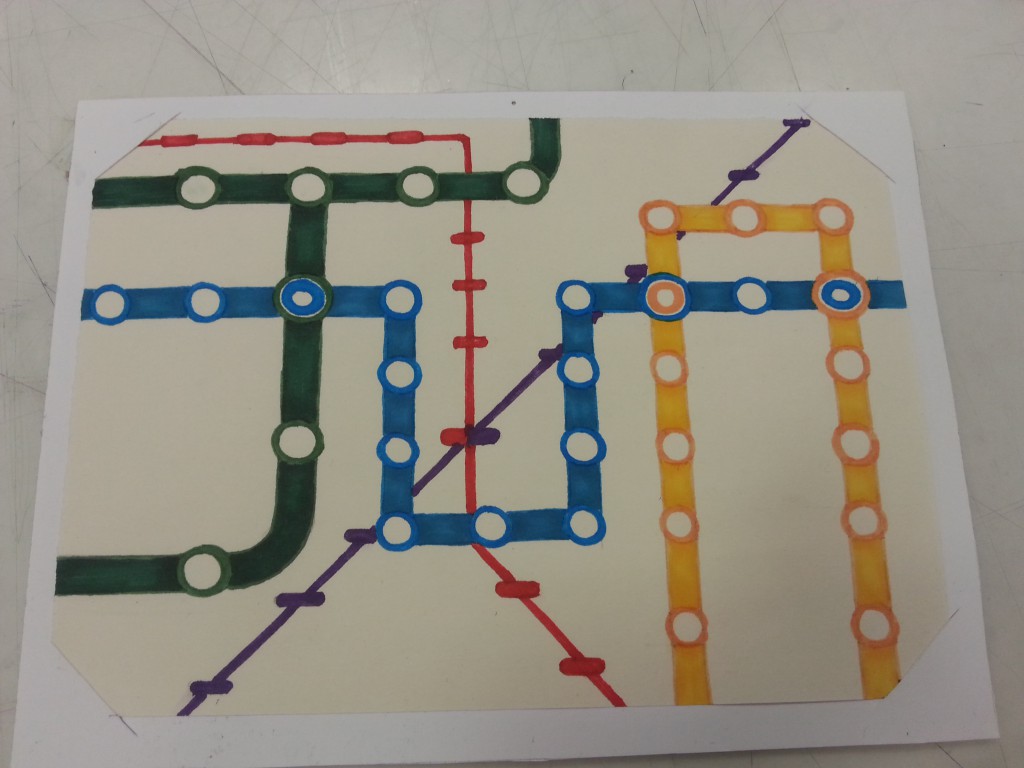 and I’m a confident person.

That’s some big words to say. I believe my confidence are shown clearly in my previous piece, but the confidence is difficult to build. It requires many assuring factors and abilities to form my confidence, just like how the Singapore MRT connects the cities. (This is not an advertisement.) 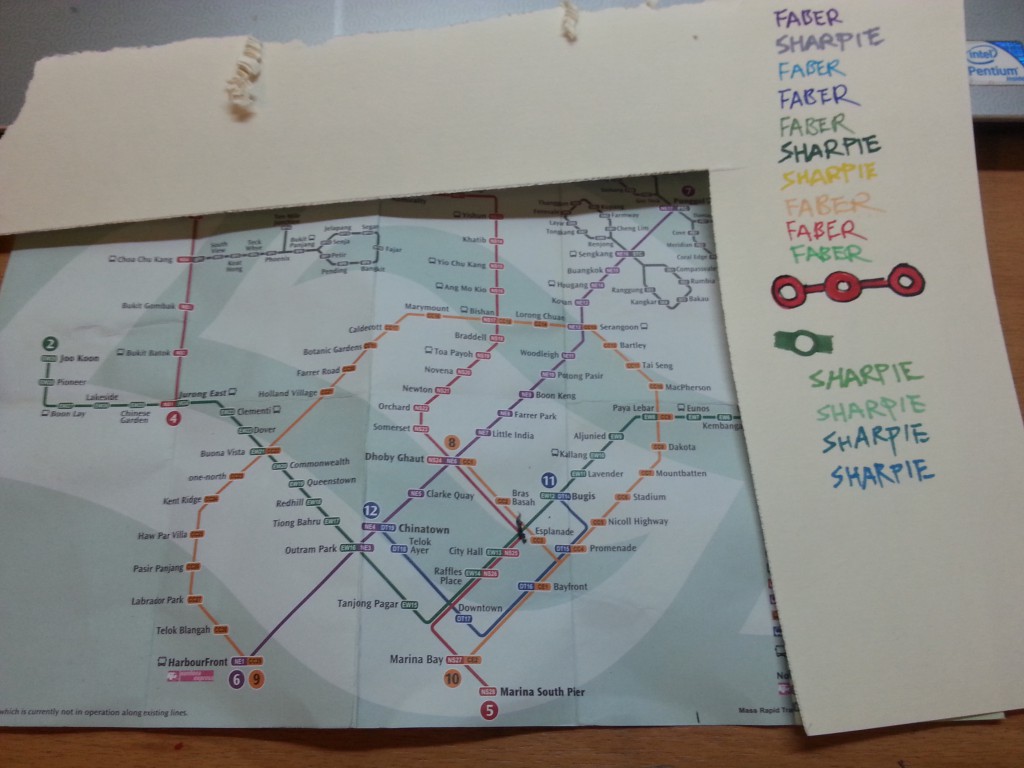 Testing for the right hue

I resembles confidence with MRT not only due to they’re confident that no station was wasted in terms of utilization, but also due to how confident they are with their arrival time estimation. Back in Malaysia, it was until the 2010s that our public transport placed the arrival time in their clocks as they are constantly late and delayed in the previous decades. Singapore MRT did not disappoint me with its estimated arrival time almost every time. (Yes, almost, because there was some breakdowns.) I picked the piece to represent my middle name JUN as this attribute only can be seen by people who began to know me. 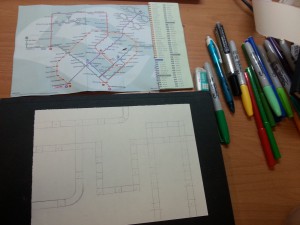 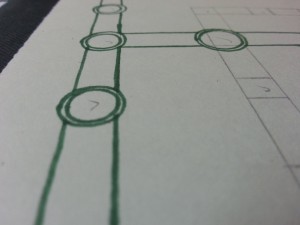 The piece was drawn by Sharpie and Faber Castell’s markers. Their ink penetrates the paper easily therefore it needs to be used lightly. Using it tested my limits in controlling their color tone, perfecting the circles, (I’m still a human after all.)and maintaining the straight lines without any ruler. (Many illustrator are able to do this, so I considered an challenge from my idols.)

The feedback for this are mostly positive, so I was relieved the whole composition worked out. The bigger challenge is to make it recognizable to the viewers but avoid making it too complicated. 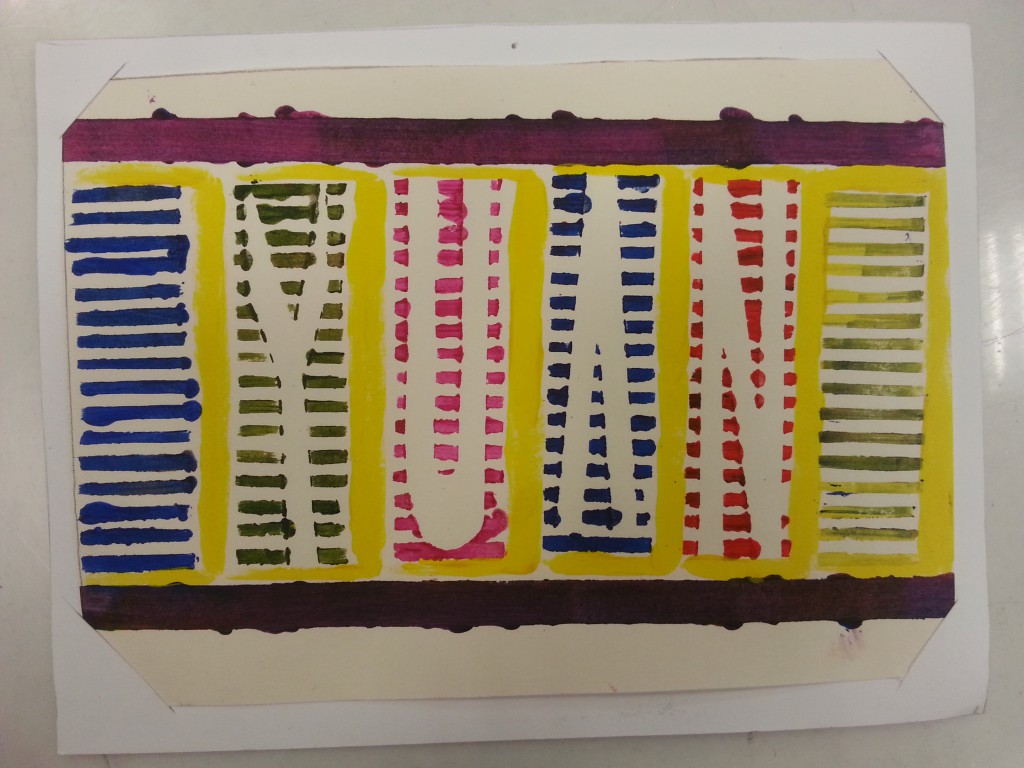 and I’m a curious person.

An escalator form a bird eyes’ view is how I express my curiosity. During my exploration, most of the MRT are either in the elevated or placed underground. Thus much of my exploration time was spent on this particular transportation. It is the fundamental portal I must go through to see a new street, a new surrounding, and a new city. Within half a minute taking the escalator, my curiosity towards the scenery I’m gonna witness elevated as well for the next 30 seconds. For this new found attribute that’s been hidden a long time, I paired it with my YUAN as it probably can be seen by people who knew me well or solely myself. 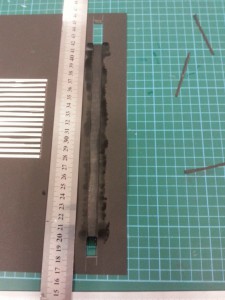 To suit such special attribute I found in the escalator and myself, I’ve chose the method of print-making. I’ve cut a template out of a slightly heavier paper and cover a piece of an alphabet shaped paper with the template. I believe my curiosity is not as black as the machine’s original color, so I chose my acrylics as the coloring medium. Acrylics are way thicker that water colors but their saturation resulted a ideal tone for this piece. The thicker they are, the easier it became a disaster. I had to redo a couple of times before I am happy with the end results, and the disaster happened during a desperate times. (the night before submission, my friends.) 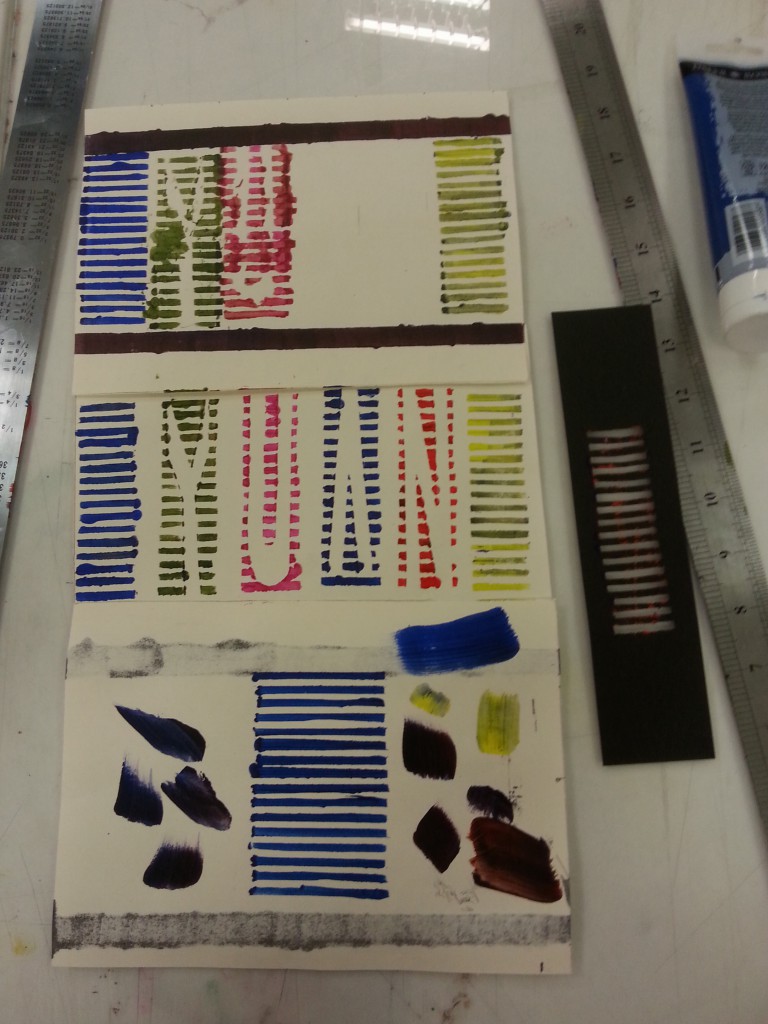 Some of my classmates are intrigued by the idea of taking a new perspective for the neglected machine. The overall project was appreciated and I am happy for what I’m able to do with my new limitations. (not doing the film things.) Ms.Joy has commented that the work accomplished its purpose for leading the viewers to a new perspective of my hobby, and it can be further enhanced by placing the piece in different spots.

The work was a success for me despite the aesthetic aspect of my classmate works are better. However,  I could learn more in contextualized my future work from the beautiful works of my classmates, through this project. (Perhaps a better time management would be good as well.) As always, I am looking forward to everyone’s next project.