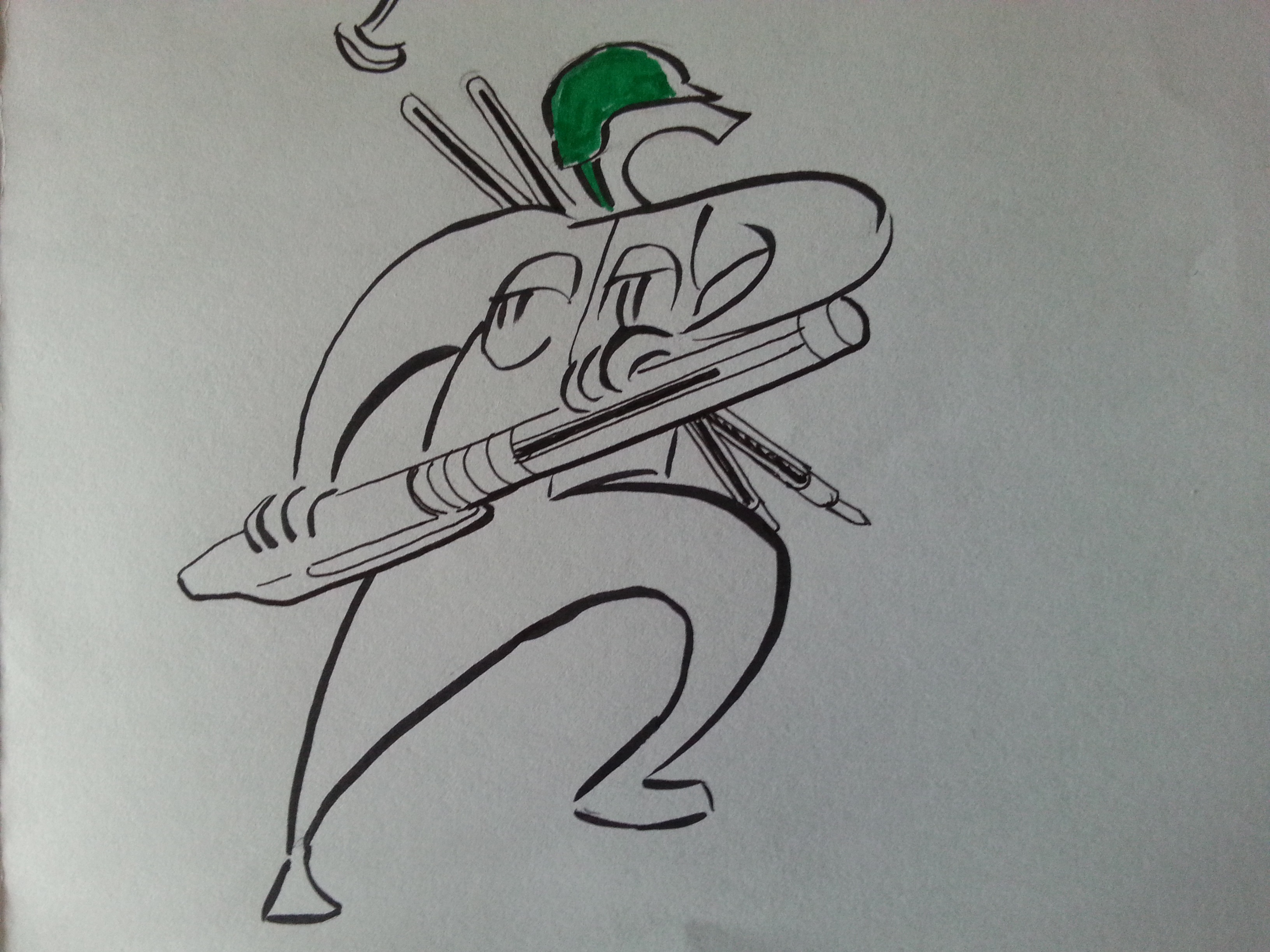 Project Point of View is over and it’s been fun. To show how much fun I’ve been, let me show you my whole final work and progress. Click in, scroll down, do what ya need to do.

The theme I’ve chosen is concept number 3, The Journey of the Pen, with ME. The reason I chose this theme is not only it’s complete but also how thought-out the composition is. A hypothetical transition from the past to the future, categorized in 3 periods of time, two for each. This transition shows how the PEN has accompanied me over the years, and how I hope it continues to do so.

A traditional pen is hard to be replaced as long as handwriting is still cool. A traditional pen, sure, leaves the mistake on, but we are able learn from these mistakes as long as it stays appeared to remind us. IT shows our process of thinking, proving our humane improvement. Okay, I sounded like a person who denies technological advancement, but these pen still has its value until the day Apple pencil doesn’t need to be recharged.

Let’s start walking through my final work, shall we? So the first journey from the past of the PEN with ME, is being through my childhood. 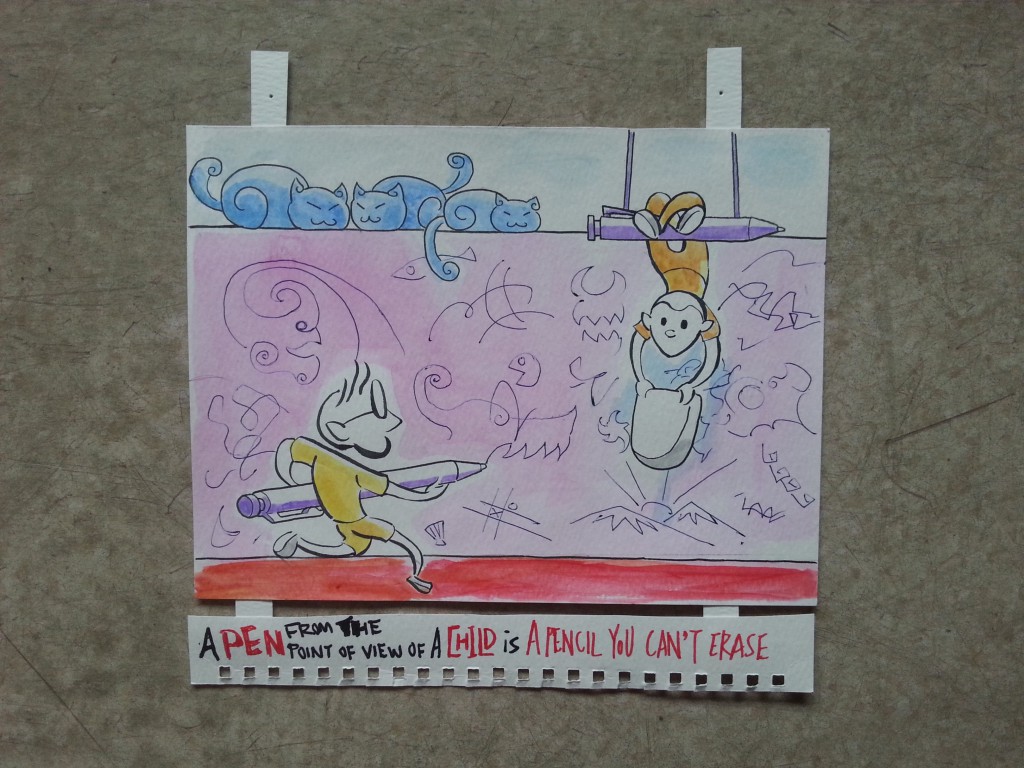 I won’t represent myself to everybody’s childhood, so I’ll just show my own version with my first meeting with the pen. After I learnt how to hold a pencil as a child, I love to doodle in the papers with my bad handwriting and my juvenile drawings. When I first picked up a pen, I was excited and drew so much stuff with it. My curiosity was shown in my naive strokes. I was shocked by the fact that how pen marks can’t be erased. If I make a mistake, it will be there forever. Thus I was very careful with the pen till the day I discover correction tape. However, I find correction tape ruins the papers so I started use strikethrough. Since, I have no fear while using a pen. (But we still can use our pens till secondary school years.)

A PEN from the point of view of STUDENT is ARSENALS. 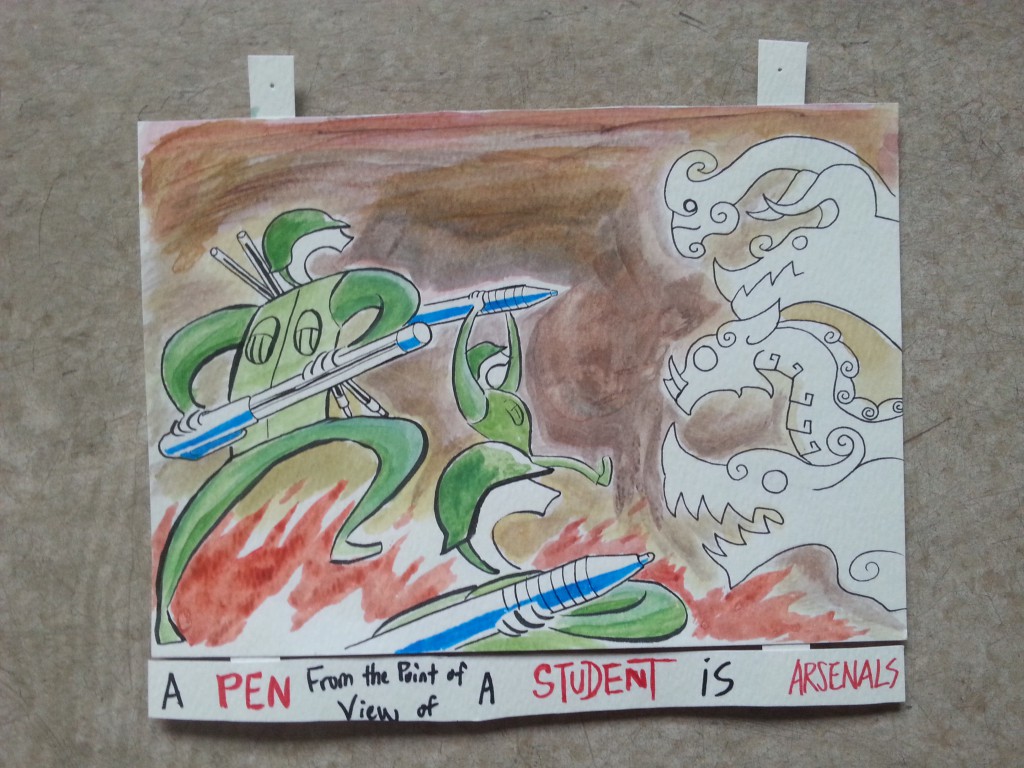 I got my inspiration from a popular manga called “Assassination Classroom”, which stated no matter what our ultimate targets or dreams are, we shall always have our “second knife (weapon)” ready. Even though I wrote “manga artist/filmmaker” countless in my essays, I was living under the hood of a rather strict-about-academics family. I’ve never regretted striving for good academic results as they’ve lead me far enough till now. University is the furthest a good report card can take us to, but I’ll never forget the hellish war we’ve been through in the examination halls. (I said it in the critique session, I’ll say it again. Our real soldiers fight in more hellish war and training, and they fight harder.) The pen is our only offense in exams, and we should never walk into the halls without extra ammunition (extra refills as shown in the illustrations.) Initially, I was going to insert textbook formulae into the white monster on the right, but then I decided, leave it to simplicity and imagination. 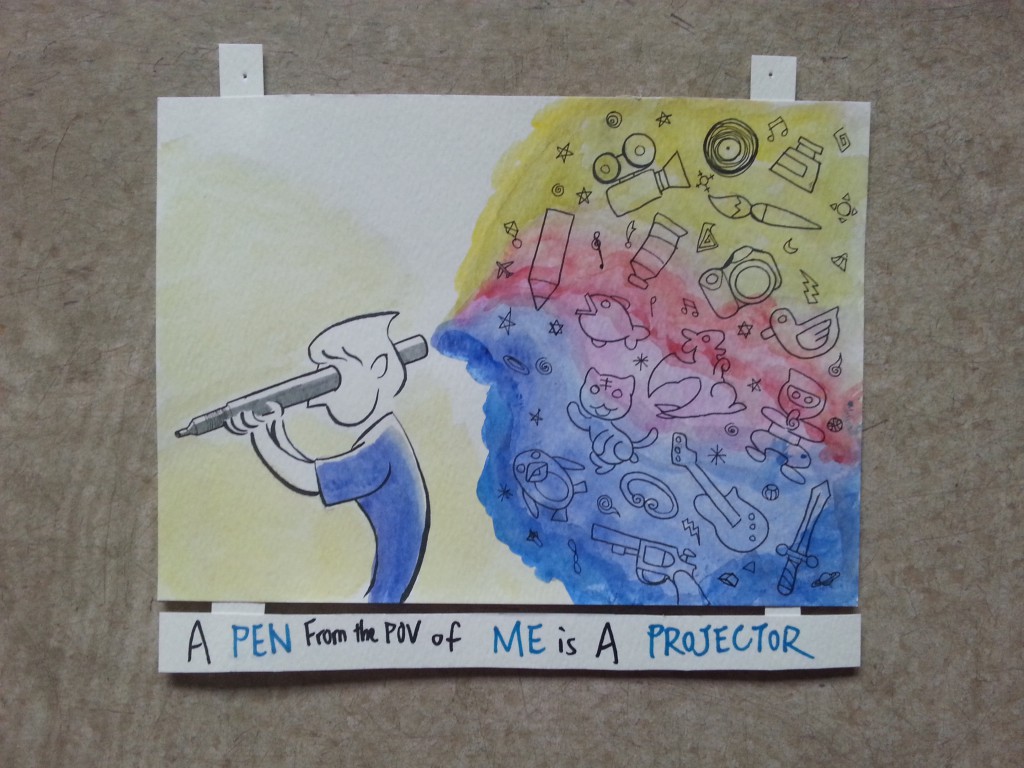 Most of the time, my brainstorming only starts when my pen (especially my ARTLINE fine tip pen, as illustrated.) touches my visual journal. That’s how all my project started since the last semester. Not only it’s my motivator to my procrastination, it also made me take a look about what popped in my mind before revising. For instance, this gruesome composition popped in my head and my pen visualized it. Perhaps this is the best way to show how mind is projected through the pen, in terms of my style. 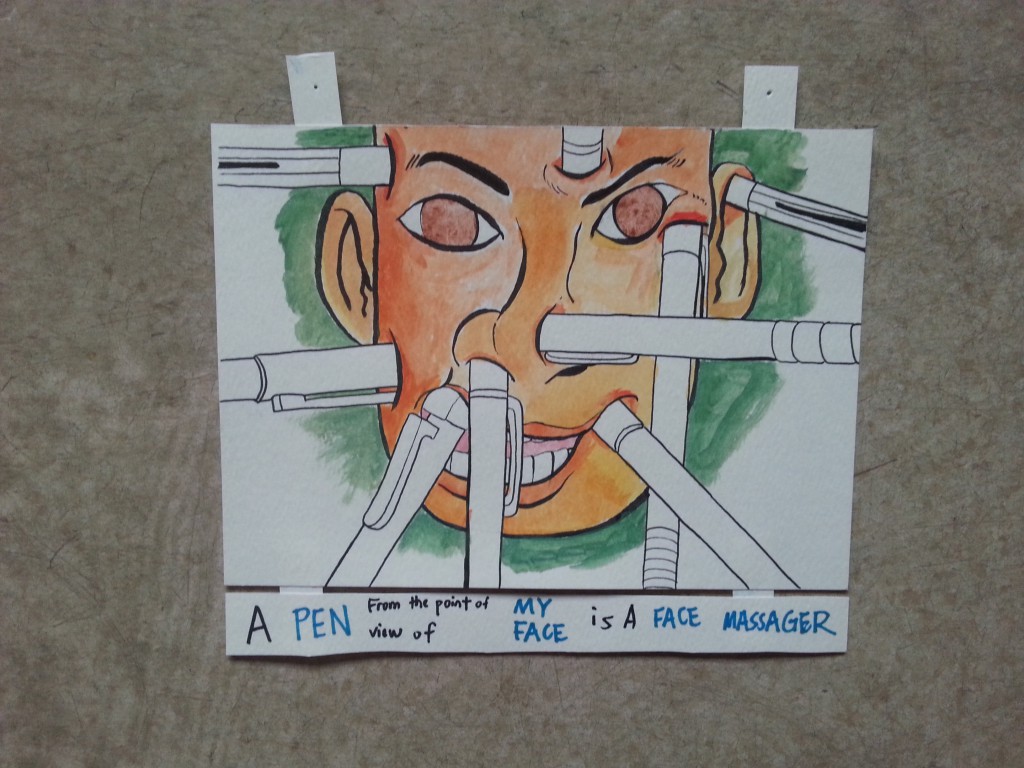 In present times, as ADM student like every other ADMers, I have tons of assignments to brainstorm, and my mind is not a firecracker that can pops idea every minute it burns. Therefore, there’s definitely times when my mind is as blank as a paper. What does it do whenever I can’t think anything? A face massager, of course, as it pokes every acupuncture points I can assume in hopes to boost creativity. Whoever learnt science here is going to confirm, it won’t work. Poking my skull through layers of meat definitely describes my current state as a learner. 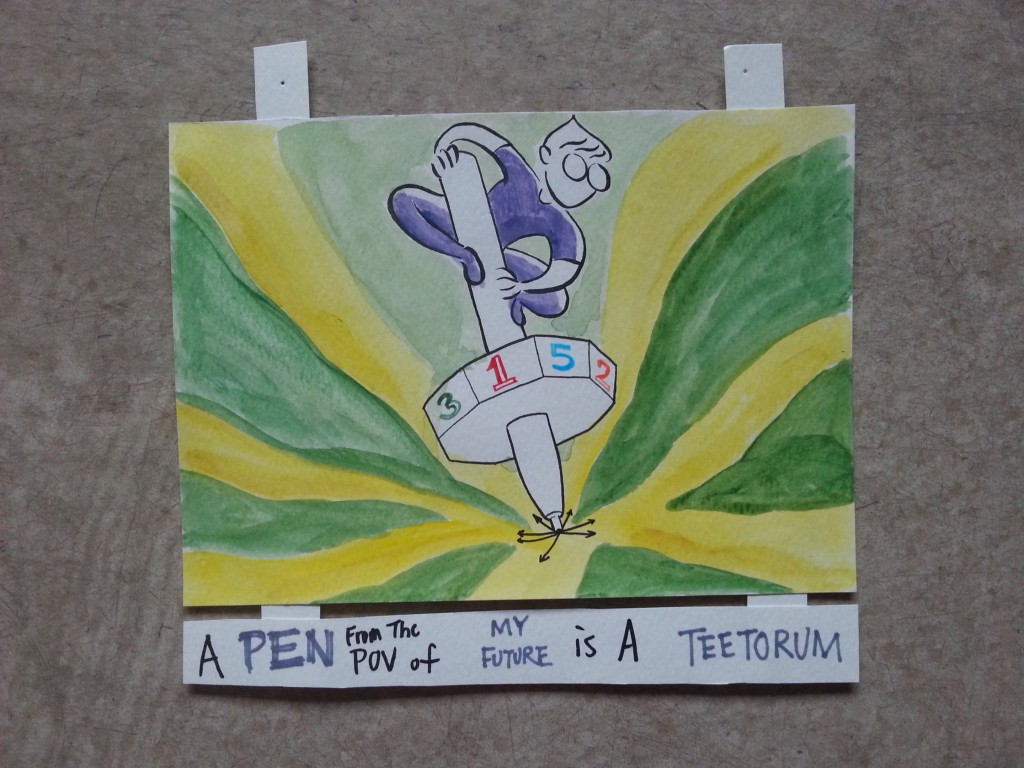 Why a teetorum? Pronouncing makes me giggle too. I doubt that I pronounced it correctly. Teetorum is the given name of a spinning dice. I chose spinning dice as it is a fate decider/diviner that resembles a pen with its stick-like figure. Thus I combined the two together and formed the one in the illustration. As I am unsure of where my future go because things don’t go 100% with plans. But that doesn’t mean I can’t control my fate of where’s my career heading. I believed not only the pen helps me determining my future, but also gives me the authority to do so. Many of my fellow dreamers might holding different version of pens, but I’m sure our ambition about fate will likely be the same.

A PEN from the point of view of FUTURE ME is A BELL JAR. 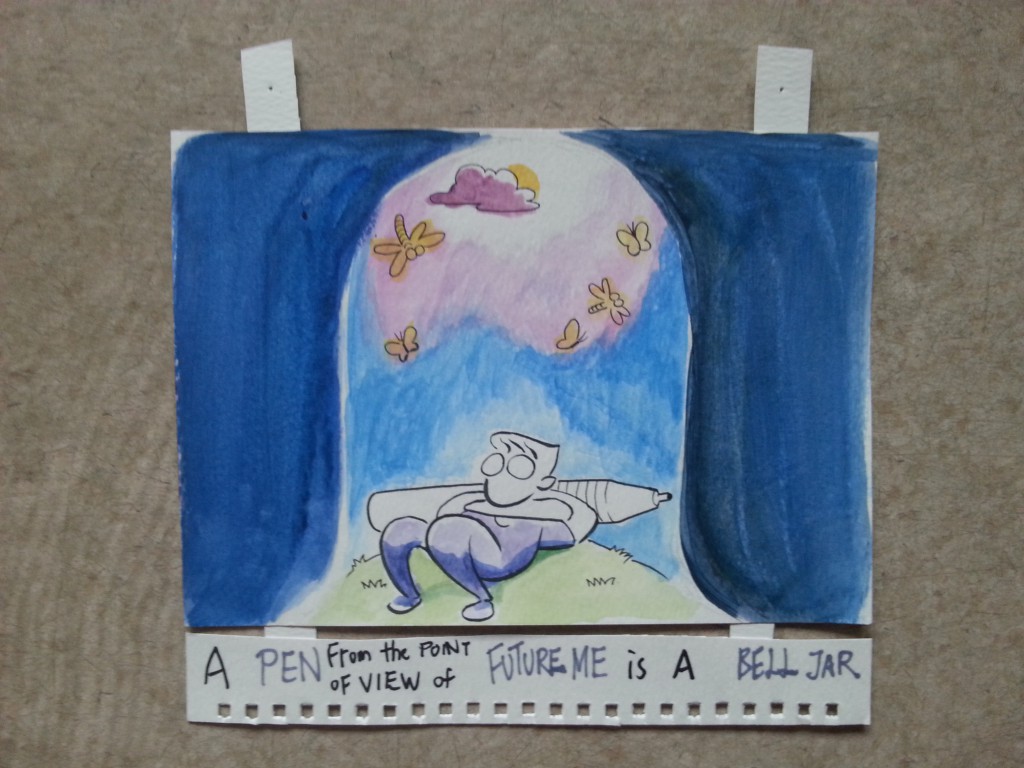 The future is like a ball of unwove thread. Knowing myself the best, I believed my future will need a fortress of solitude under the possible pressure of my future jobs. Thus my own version of terrarium is formed. Even in my present days, I find my time-to-time fan art ink illustration meditating and relaxing. The pen shields me from all mental disturbance ever since and I hope it will do so in the future. And what’s not a better way than placing the pen as best inanimate buddy in the last panel to wrap this all up?

I decided to go with diluted acrylic because it greatly resembles the effect of water colors and acrylic is the most abundant art material I have. Diluted acrylics to me is like a pen to my childhood. Why? Acrylics can be corrected in its oily state but once a mistake is made in its dilute form, a saturated form is needed but it will then destroy the effect I intended. Fortunately, they all worked out like a charm. This is probably the first I resisted the urge of fully covering an illustration with colors because I found there is an effect of dragging attention to those blank space by not coloring them. The work also trained me well in using brush pen as the main inking tool.

Overall, my fellow classmates like my use of the thick and thin ink strokes. Even though I’ve used the character style of Adam Lurkam and the attempted imitation of Jacqueline Bissett’s strokes, the viewers in the critiques agreed that the work projected my personal attributes. Moreover, it does succeed the children illustration look I wanted. I am satisfied with the outcome and the traditional medium I’ve challenged.

I have to mention everyone else in my class did a splendid job in their work as well. I am going to miss the times we get to spend in such eye-opening critique sessions. Looking forward as usual to everybody’s zine works!