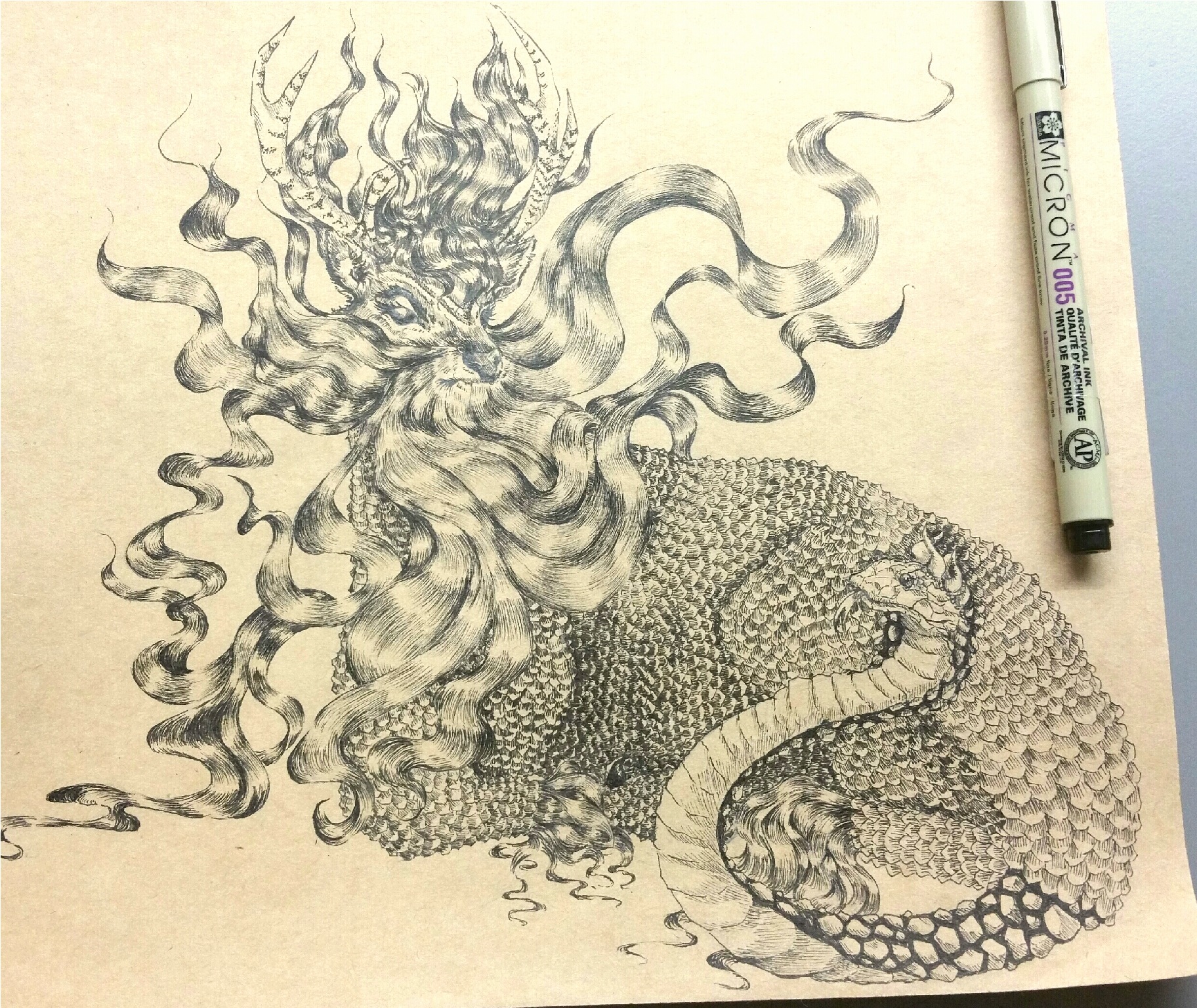 This post will consist of few pictures of my drawing process and the captions for each animal I came up with and drew.

A breakdown of my drawing schedule: I drew the Mermaid Blood bottle first three weeks ago, followed by the Qilin in the second week. After that, I finished the other 9 drawings in 2 days (48 hours). Not the best working schedule, so I’m pretty grateful that my works turned out well, that I managed to finish on time and still had ample time to spare to print my works nicely!

So the only animal that I had the foresight to take progress pictures of was the Qilin (because it was the second drawing that I did). Here is the basic process that I used to draw: I first started out with a very light sketch of the creature on brown paper. I made sure that the lines were very light (Other than the heads, because I needed to be sure of the details on the faces)  and only delineated that shape that I wanted, because all the finer details would be added on later in pen. I then started to outline the creature in black pen. I added more and more detail, working my way down from the head. The sketching was tedious as I tend to like alot of detail and wanted every scale and hair to be visible. I also played alot with the number of lines in the scales to give the illusion of depth and shadow. Here are some other process drawings that I remembered to take during the 2 days of drawing. The process drawing of the Basilisk The final drawing of the Basilisk with a pen for scale. Here are my final pieces and the captions that are meant to go along with the images. The images and captions (as I mentioned in a previous post) are meant to be excerpts of a catalogue of a curiosity shop that deals solely in mythical creatures and items.

(Unfortunately, I am unable to post the name of the shop nor its whereabouts online. In-depth knowledge of the shop only available to a select few clientele.) Pixie Dust: Dust that forms from the laughter of pixies. It evokes memories of youth and mischief. Crystal Fox: A distant relative of the 9-tailed fox. Sneaky and witty, this nocturnal animal spends most of its time underground in dark caves. It has a tendency to hoard shiny things like crystals. Qilin: A creature that is made up of a great number of creatures and is very in tune with its emotions as a result. It is normally docile and makes a great companion. However, the snake will attack when provoked. Be warned. Assorted Creatures: A collection of creatures that represent the different facets of human emotion and values. Only comes as a set. Basilisk: A small creature that is highly venomous and vicious. It petrifies anything that locks gazes with it. Assorted Creatures 2: A collection of creatures that represents the different facets of human emotion and values. Strangely enough, this set seems to only consist of good emotions. Mermaid Blood- Made from the blood of a volcano mermaid and distilled to its finest form, this liquid induces courage, bravery and ferocity to fight for your dreams. Moon Tree: A tree that only bears fruit under the light of a blue moon. The moon rats that are born from the fruit possess infinite wisdom. Chinese Dragon Pearl: Pearl from a Chinese dragon. It is said to bestow power and the wisdom of a thousand ages to its bearer. This pearl will help its wearer differentiate between good and bad and to always do what is right. Sun Scales: Scales from a Sun Snake, immensely large reptilian creatures that live for eons. These snakes curl up into balls and give off intense amounts of light energy. This light-proof box contains a single snake scale. When consumed, this item grants inspiration. Caged Leopard: When released, this creature will draw out its owner’s hidden potential and help him/her to succeed. Its horn is said to glow during this process. Chinese Phoenix: A creature from Chinese myth that governs over the cycles of spiritual rebirth and renewal. Witnessing its flight is said to bring about great happiness in life.