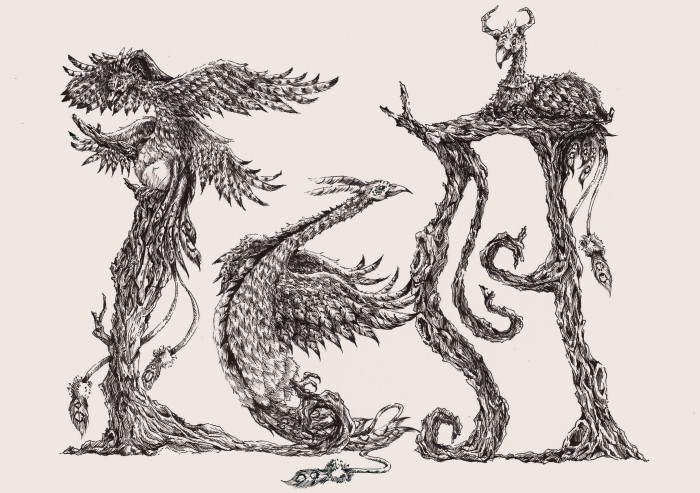 For my final, I decided to go with the idea of the jobs/careers that I have taken up in a parallel world. I thought that it would be more interesting and whimsical as compared to simply creating works that spoke directly about my personality. The jobs I created hint not only to my interests but also to my character as well.

I separated the pictures in two ways- firstly, in terms of how I incorporated my name into the picture, and secondly, the drawings that reflected what I am and what I want to become.

1) Hello, my name is Lea and I take care of birds that are too scared to leave the nest. 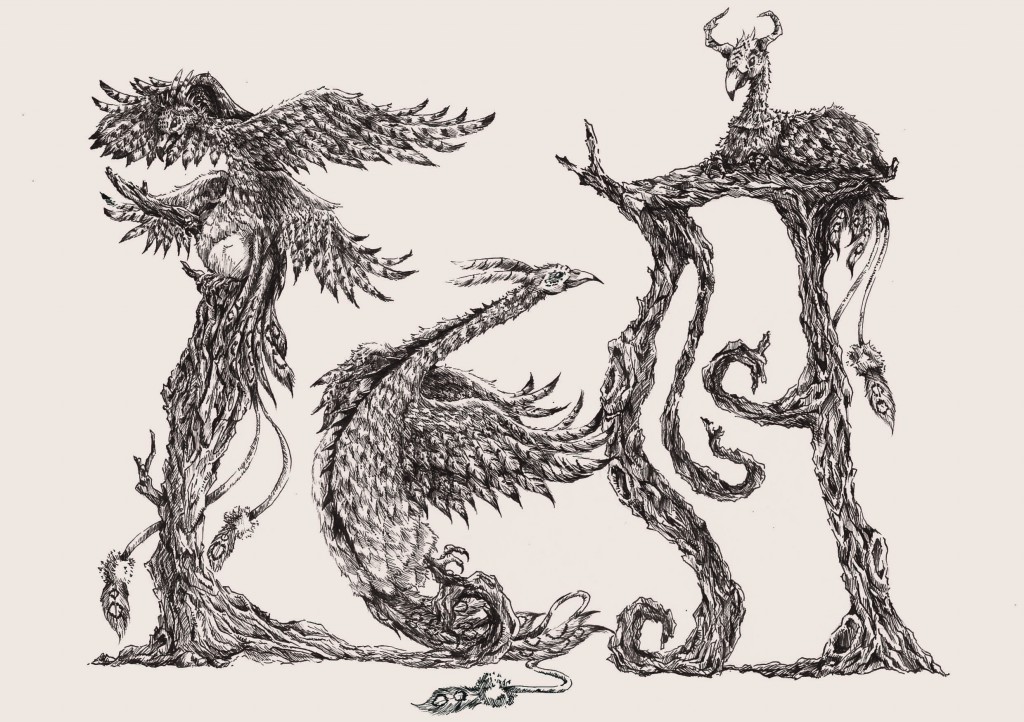 Caretaker of Traumatised Rainbirds: For this work, I decided to try creating my name out of the birds and branches, instead of simply placing the letters there and placing the birds around them.
The job of taking care of traumatised rain birds were meant to not only depict what I prize highly- compassion- but to also reflect me as a person. I too am sometimes too scared to leave the nest and try new things, thus maybe that’s why I treat and take care of these birds in an alternate universe. Because I see myself in them.

2) Hello, my name is Lea and I play lullabies to carnivorous plants. 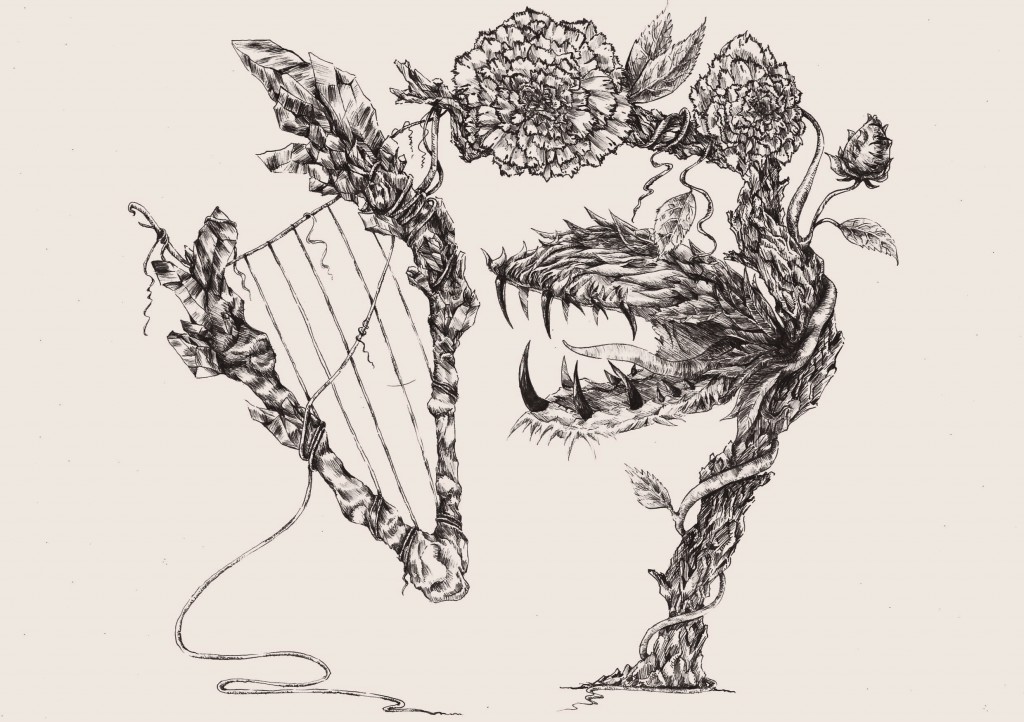 Carnivorous Plant Singer: For this work, I wanted to push the boundaries of depicting letters in illustrative format. I wanted to keep the illustrative element of it as much as possible, but also wanted people to be able to make out my name if they squinted and took a closer look.
The Carnivorous Plant represents the sides of people that are gluttonous and never being satisfied with what they have. However, when you turn it over, its qualities are reversed, thus making it a symbol of well-being and satisfaction in life. Since my name can only be viewed from this side, it is meant to be associated with the good qualities of the plant rather than the bad.

3) Hello, my name is Lea and I slay basilisks. 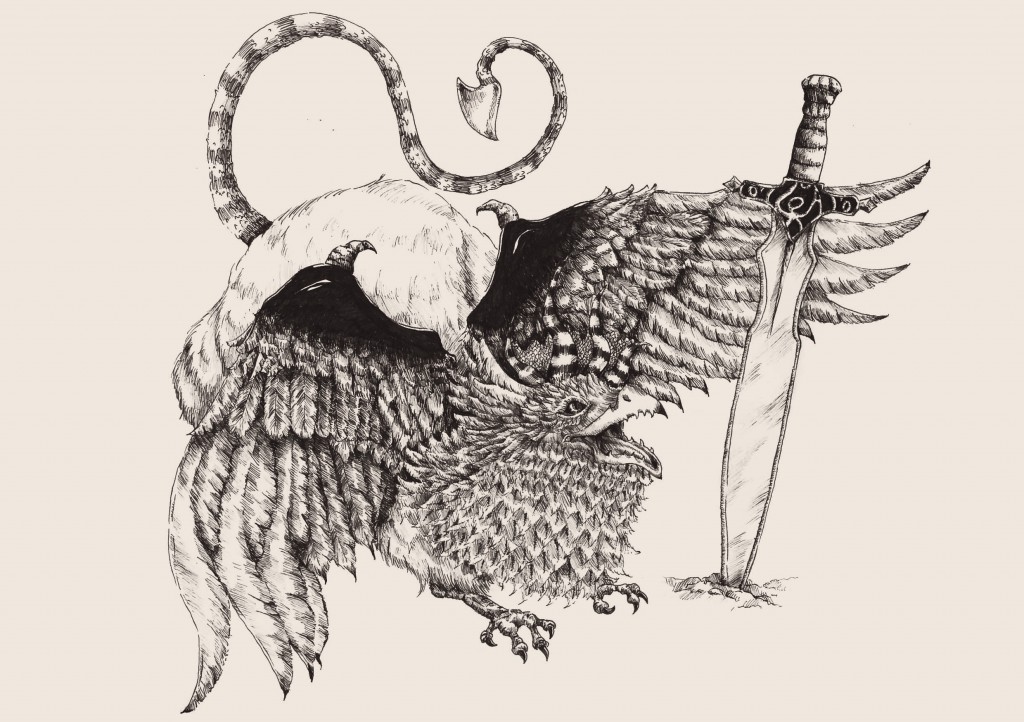 Basilisk-Slayer:
The basilisk was a creature that I created a rendition of in my previous Ego project in Semester 1. For this project, I decided to take the meaning behind the Basilisk- a small, vicious creature that is highly venomous- and use it to say something about myself.
In the parallel world, Basilisk Slayers are courageous fighters who perform the mostly thankless and highly dangerous jobs of killing these evil creatures. In this world, I want to be able to face down my fears and conquer them. Thus, I placed my name on the hilt of the sword, not only to show that I am the owner of the sword but also the sword itself.

4) Hello, my name is Lea and I study dragons. 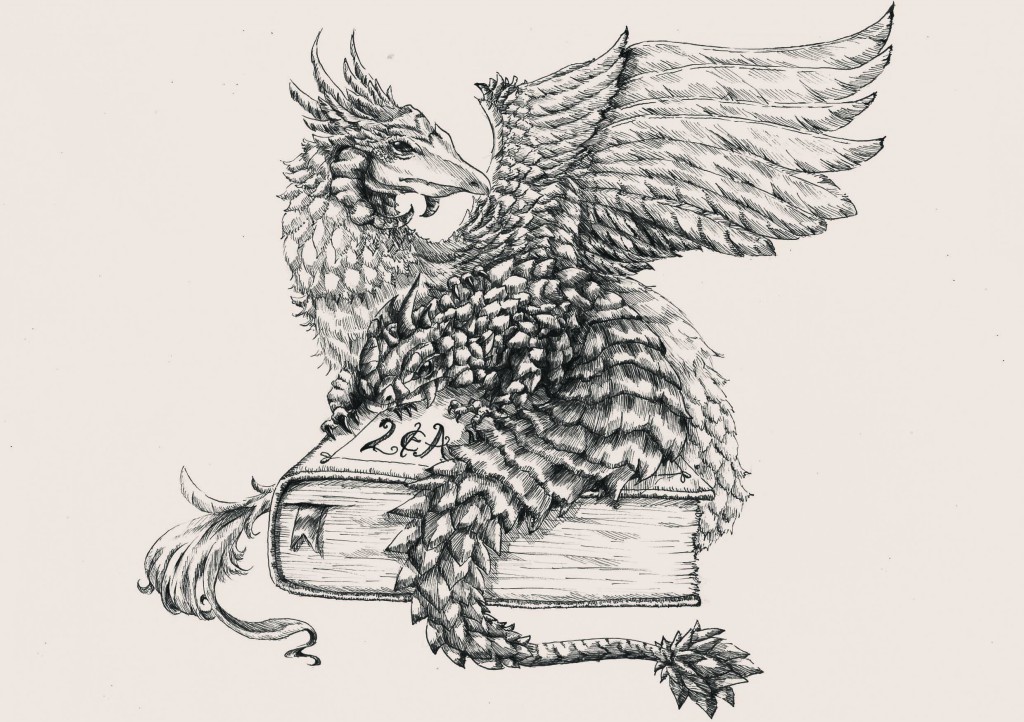 This was probably the version that I struggled with the most in terms of Typography. This was my initial design, but after inking, I realised that the name looked too out of place because the lettering looked very amateurish. 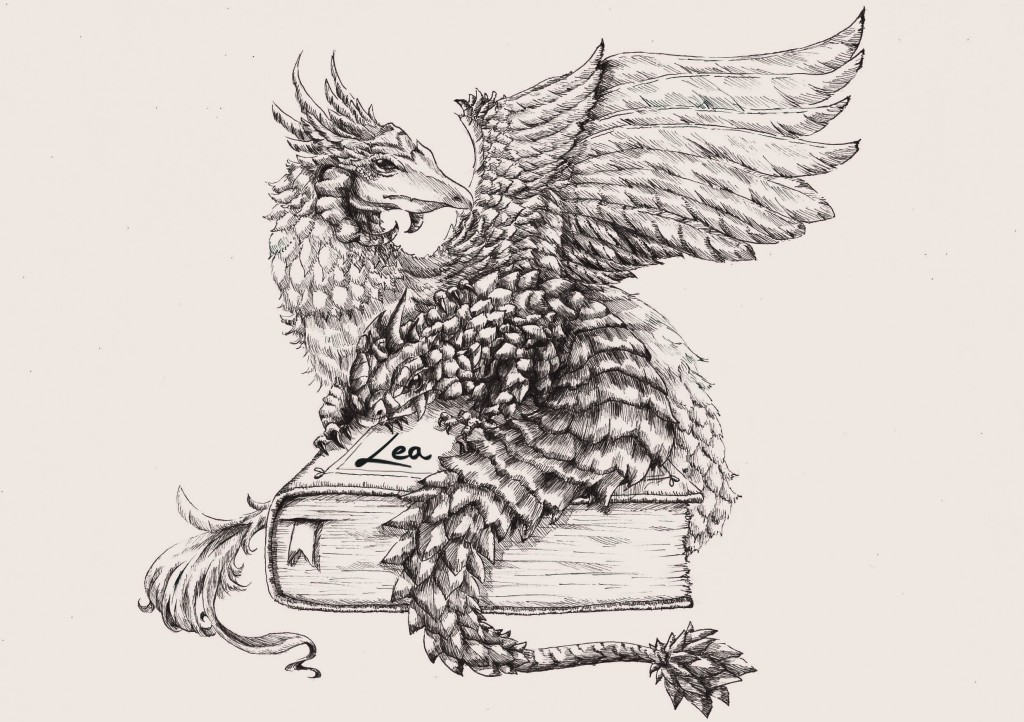 I then tried to Photoshop the text and digitally place a new set of letters, but it still looked very out of place with the illustration and the linework. 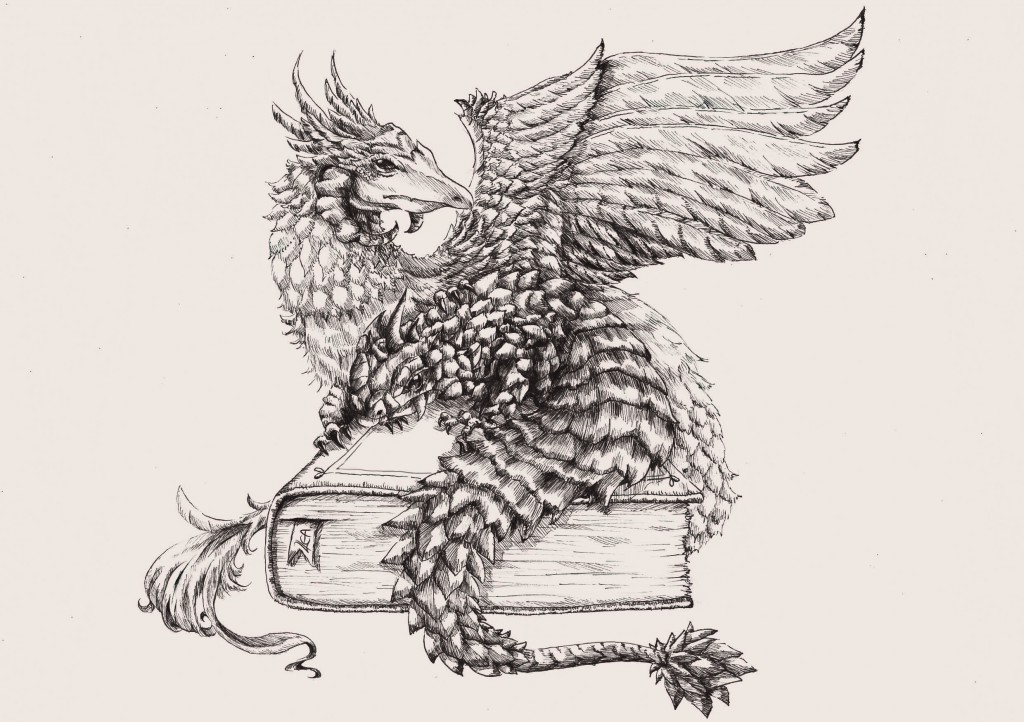 Finally, I decided to place the text on the bookmark as it seemed the least intrusive and gelled with the whole work much better than the other two, However, after looking at it again in print, the name became really small and it looked like I placed it there as an afterthought instead.
(Meaning behind this work) Dragon Scholar:
Dragons have always been seen as beings of immense intelligence in all mythologies- be they good or evil. A person who studies dragons needs to learn their language, which is by far one of the hardest known languages to learn in the alternate world. Additionally, dragons are proud by nature, only bestowing their knowledge to those they deem worthy. Thus, a Dragon Scholar represents the qualities of determination, perseverance and diligence in pursuing goals, which is something that I want to achieve for myself in this world. 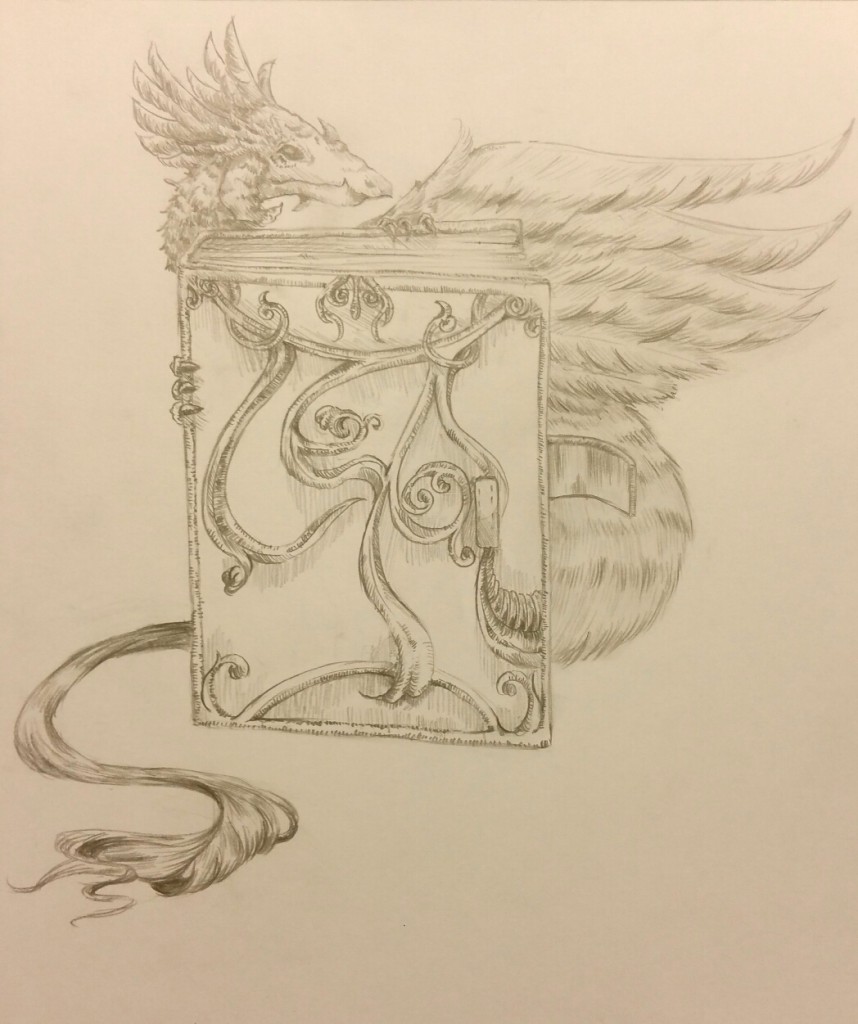 I was still really dissatisfied with the final (Especially after printing it), so I decided to come up with an alternate sketch for the design. In this drawing, I decided to showcase the book in an upright position with its over showing. I tried my hand at a filigree-style for the the letters of my name. 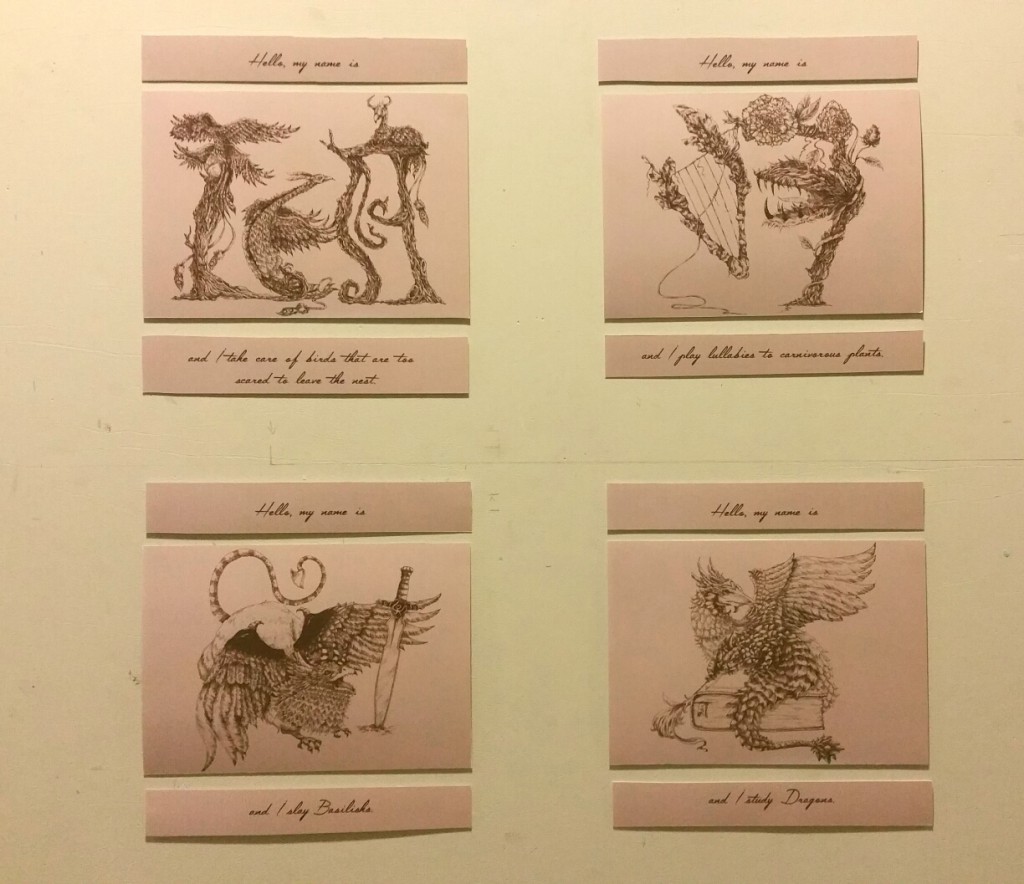 This was the layout for my final presentation!
After printing and putting it up, I have to agree with Prof Ina that A5 is too small for my drawings as it shrinks down the details a great deal.