This post basically records my mistakes and realizations during execution. 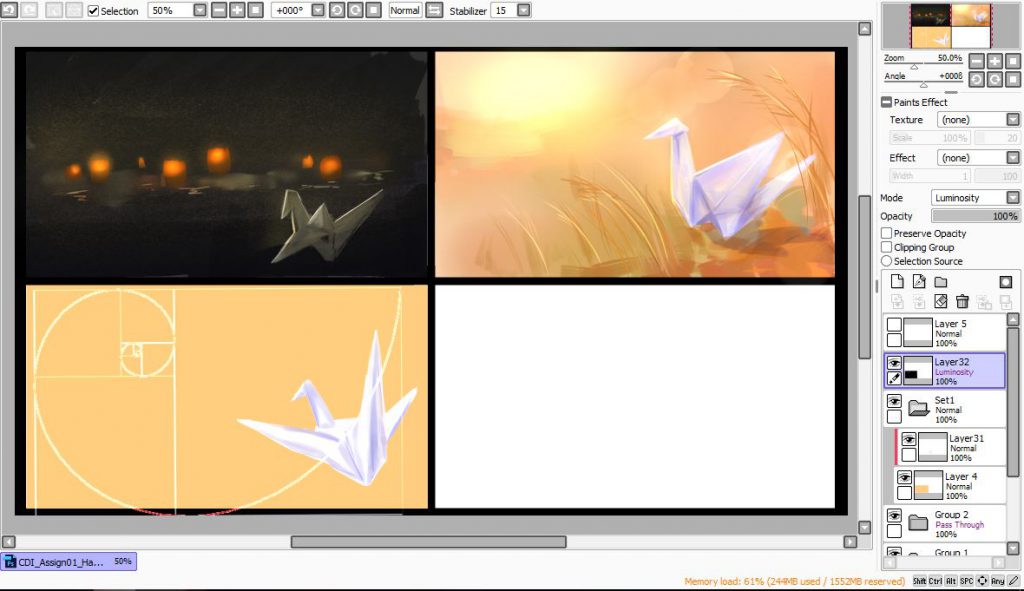 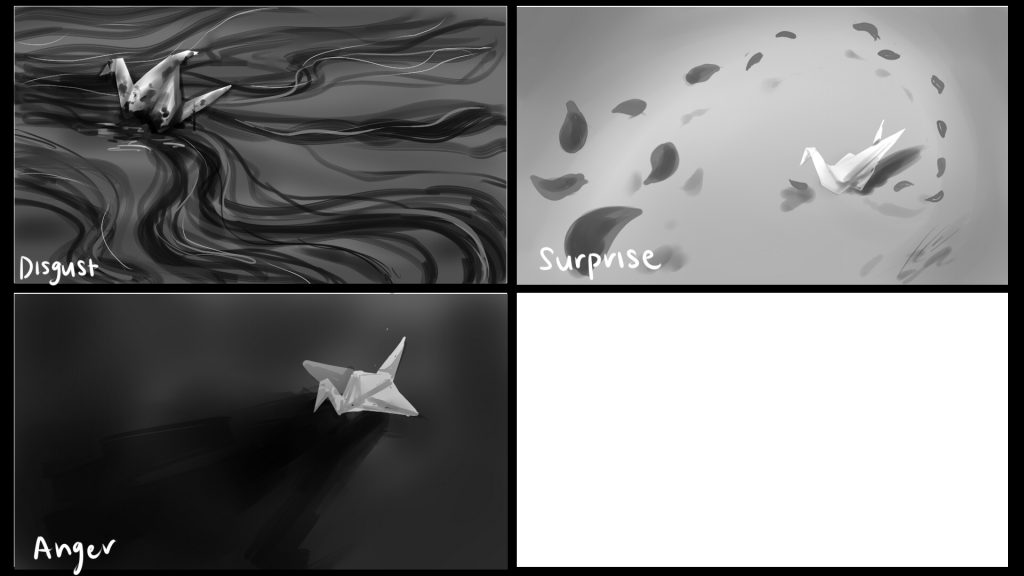 …. I realised I can only do mid range or close framing if I want the paper crane to be clearly visible.

Unless I do away with the paper crane, my framing will all be restricted. Since the paper crane is supposed to the consistent focal point through out the 6 image.

This isn’t really what I want.

Anyways at this point I was still not confident to use photoshop so I used Paint tool SAI instead.

Forget it, I’ll make use of storytelling. And illustrate.

I guess i’ll use a character. So the settings of this assignment will be landscapes of emotions.

Emotions is considered as feelings. It reminds me of tastes. Like for example, anger is like spicy food. (explosive).

Anyways, this is my second attempt painting on Photoshop.

Below, I recorded my process and random thoughts I had along the way.

All colours I picked are colours I plucked off the colour wheel. I did not use any image off the internet because I wanted to force myself to think. 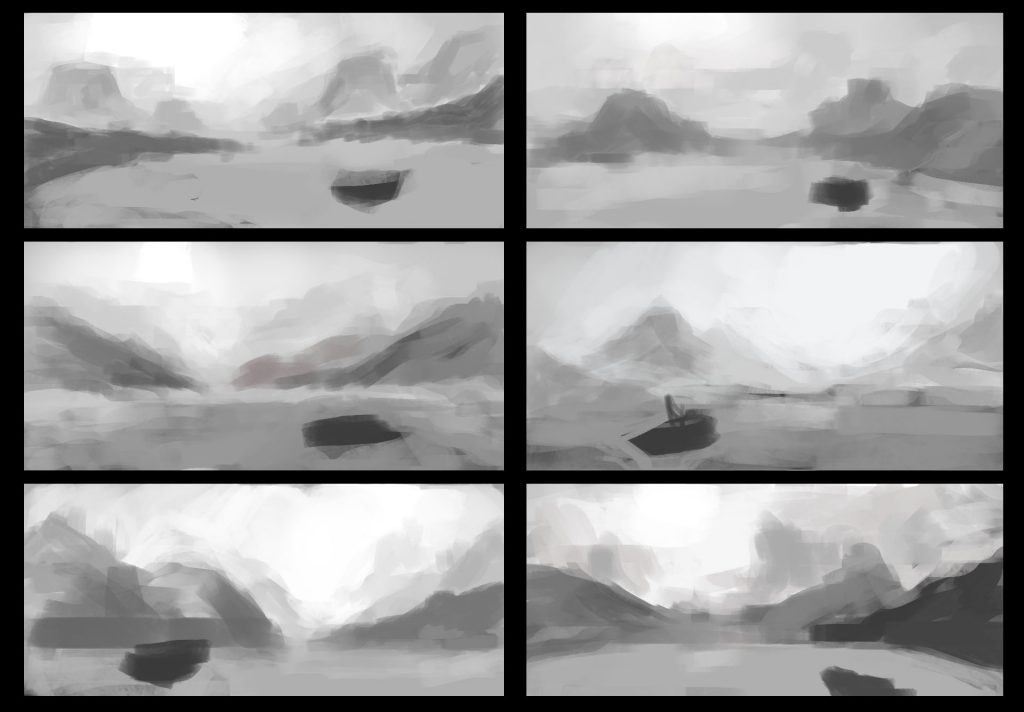 I figured something was not working so I decided to redo the composition.

Anyways, Happiness reminds me of sweetness. I thought of Jelly.

Thus Jelly fish. Partly because I want to play with lighting. Since young I was fascinated by jellyfish because they look like glass. 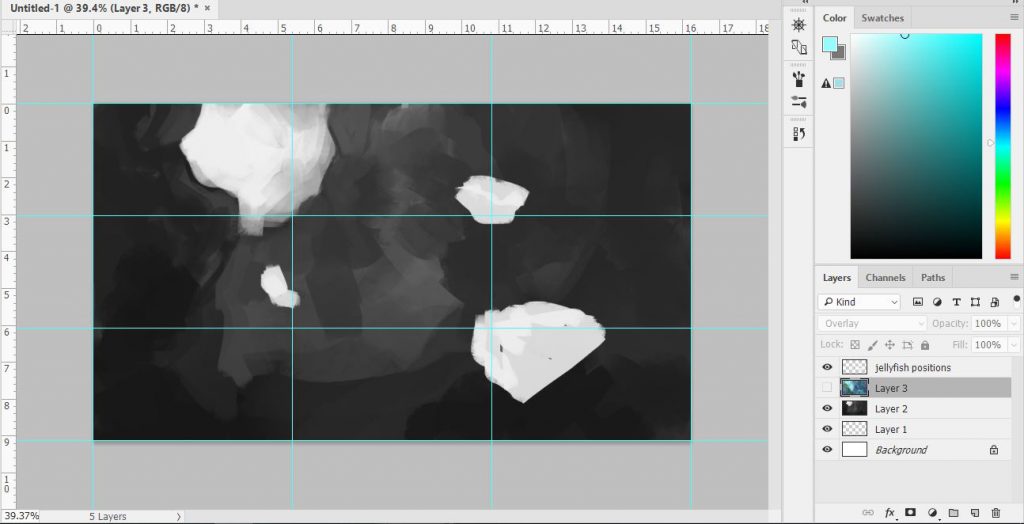 Blocking out the form and value, considering the framing as well. I made sure to separate the jelly fish from the background as separate layers. 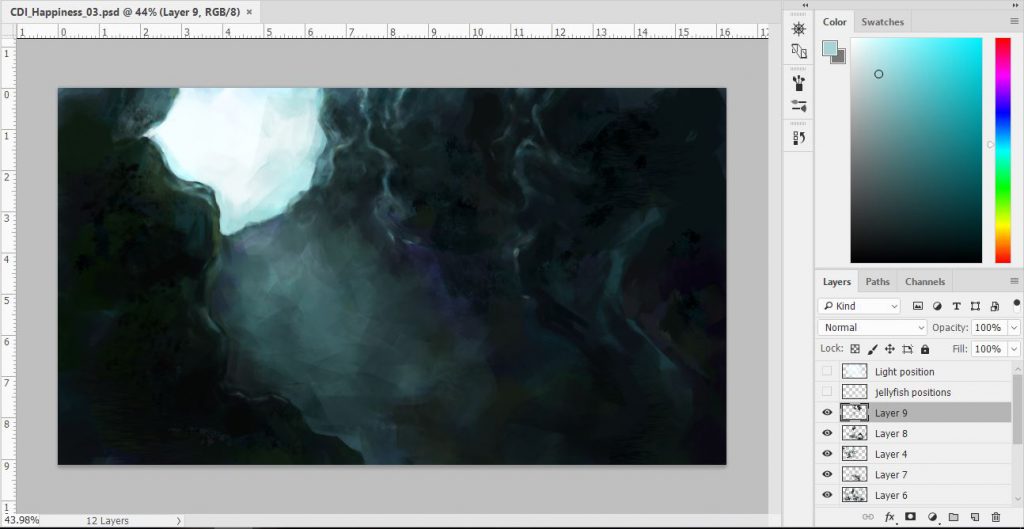 Rendering the background, creating texture. I tried out various texture brushes I downloaded. To create the lumpy surface I tried to be as asymmetrical as possible. Knowing that I will add in light later, I kept the reflected light on the rock surface dull to avoid it clashing with the main focus of the painting. 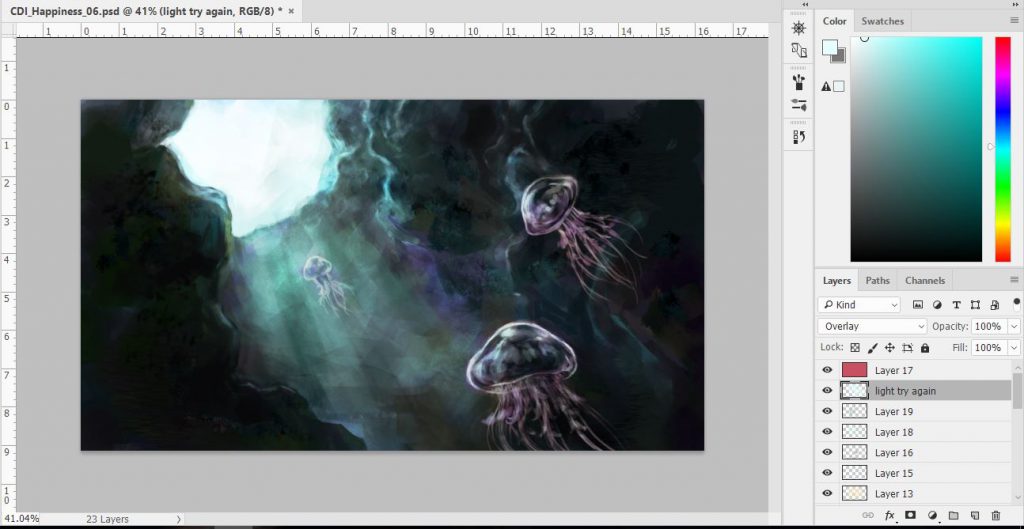 Rendering of light, I tried air brushing and also other brushes to experiment. I wanted to show how the ray of light falls into the cave. I took my time to render it as the light ties every thing together. 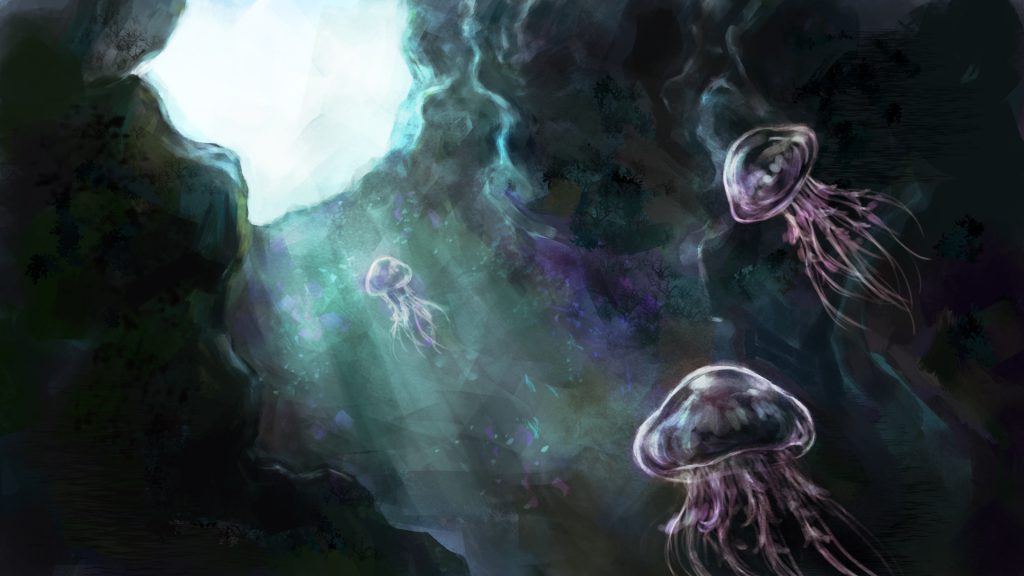 I made use of a blues, greens, turquoises in the back ground, and used white and bright pinks for the jellyfish.

The varying colour helps to contrast and bring out the focus.

I added subtle sparkles with various texture brushes/ effect brushes into the light to add in more life into the painting.

The jellyfish were actually very difficult to paint. I had issues creating this transparent look. I think I could do better if I understood better how my brushes worked. Perhaps a watercolour brush or something. I tried my best here but I’m pretty sure in future I can paint this better. (?) Or maybe it is just me.

Anyways, i think jellyfish are worry-free creatures. They have no brains anyway, it’s not exactly a bad thing keke.

I always found fish that is not properly handled disgusting.

The heavy, unpleasant fishy taste as if the cooked fish is still raw…

The first thing that I was reminded of was sardines.

When I was a kid I remembering throwing away slices of fish I did not want to eat. I tried to do it secretly so my mom didn’t notice. Lol but she caught me several times actually… 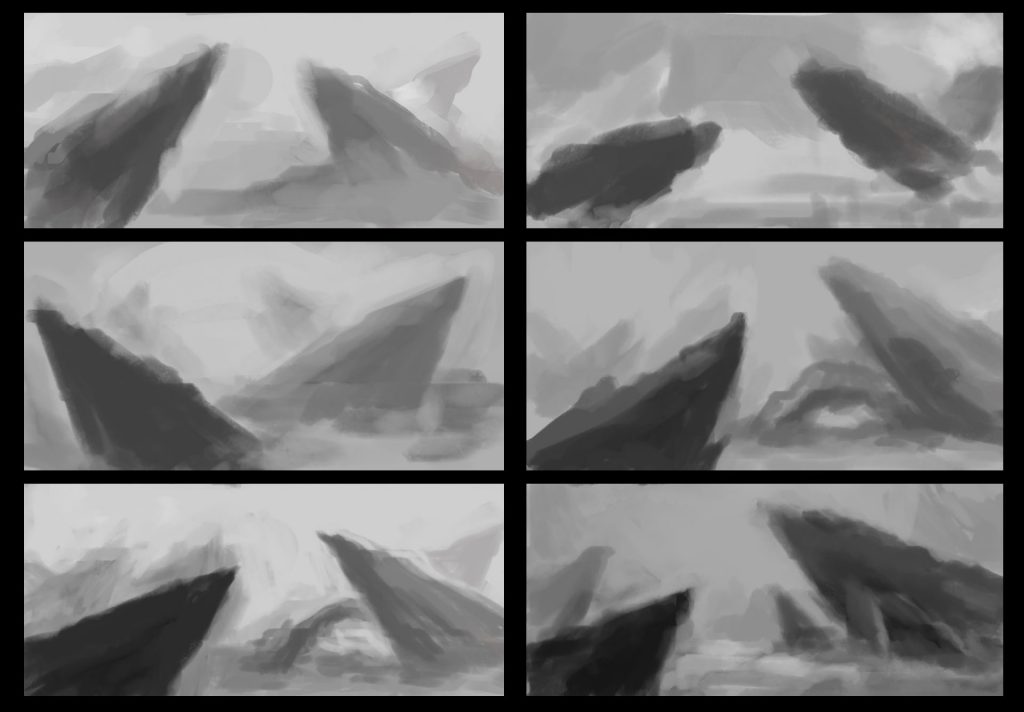 I decided to go with disorientated and jaggered arrangement to create the idea of instability.

Disgust could be considered an erratic emotion. I also made use of sharp edges in the composition to create a sense of direction. There is a general direction but thanks to the jaggered arrangement it helps to create chaos as well.

Blocking in shapes and values. I need to make sure the misty effect and fog effect is obvious. It is used to create a sense of mystery. Reason why it is colored because I forgot to screenshot the grey scale block in that I did. 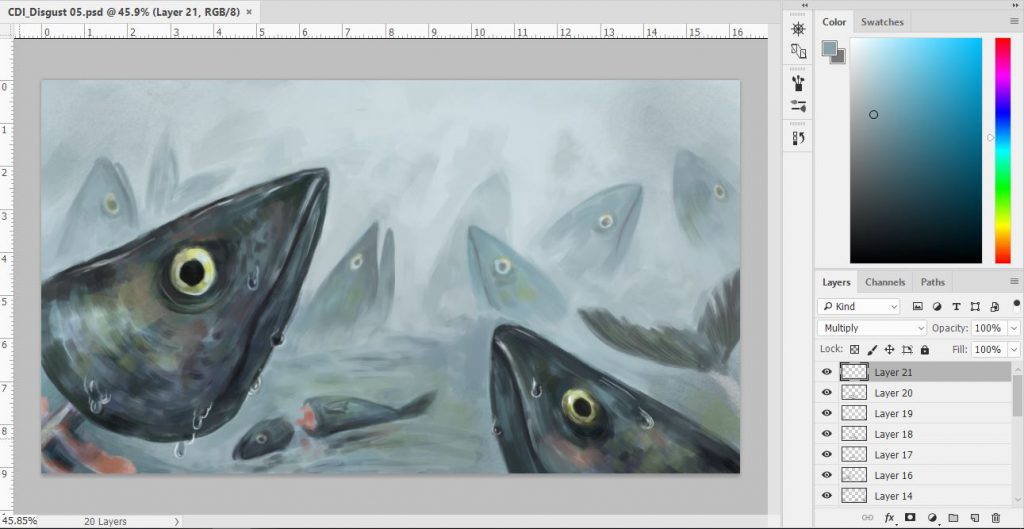 Adding in details here and there to bring out the image. The water(?) on the fish in front is added to add visual interests. 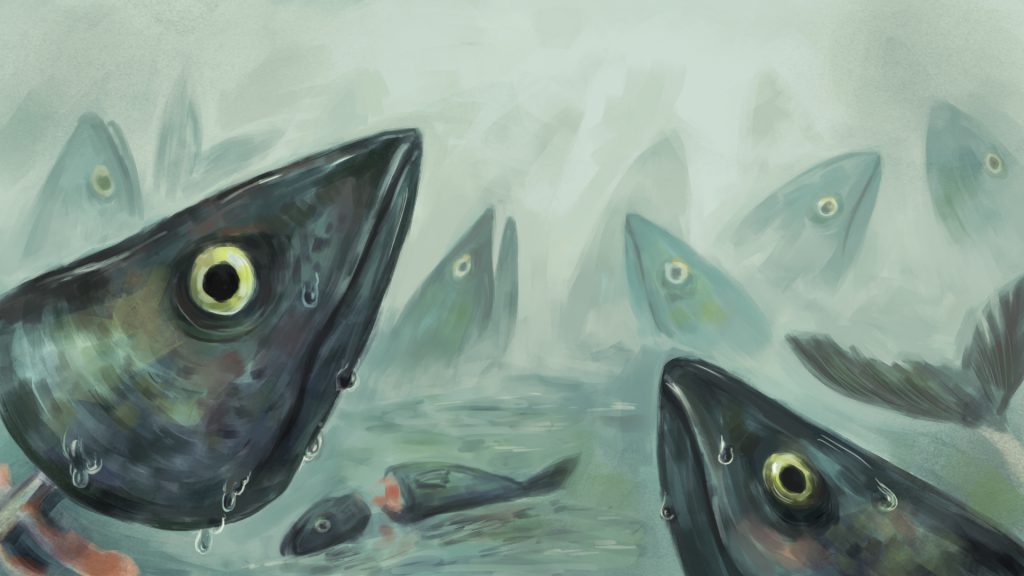 During the editing process I added a green tint over the image to further bring out the idea of Disgust. The color dirty green helps to bring out this raw-ness. Green also reminds me of the colour of vomit LOL.

I tried to add more texture or leave the brushstrokes untouched or at least not overly blended. While for the back I made sure the brush strokes are smoother to create depth.

In the background the blurry mass is to create the implication that there are numerous fishes behind. It is like a valley of corpses. I think the number of fishes help to bring out the idea of disgust and to create discomfort.

Anger reminded me of spicy food, and the first dish that came into my mind was Chilli Crab.

Thus I made use of crabs for this painting.

I also used sharp edges to create an aggressive environment. 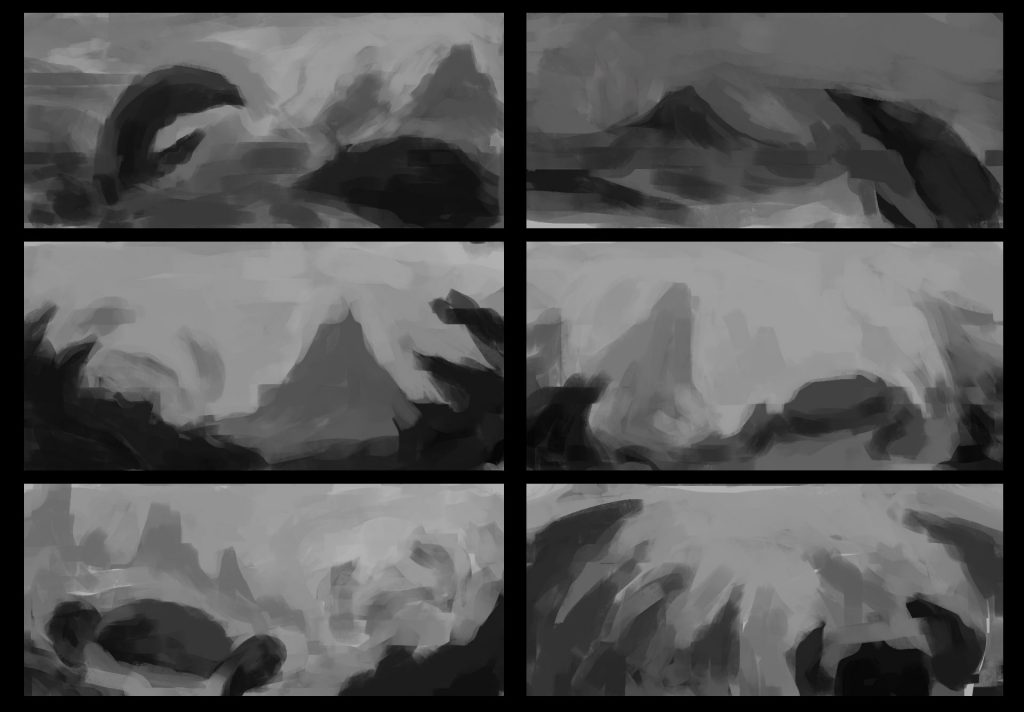 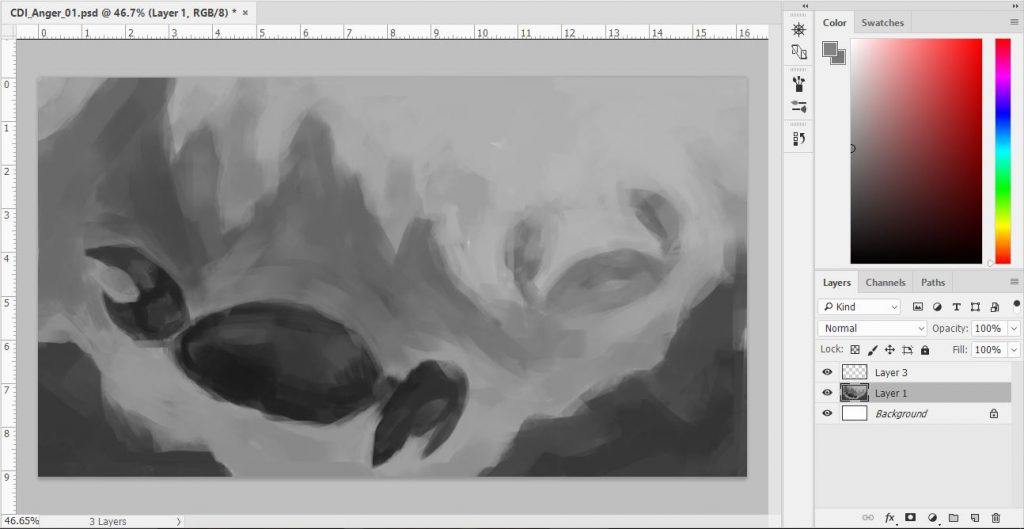 Blocking in shapes and values, shifting things around. I positioned the mountains and rocks in a way that there is a V shape which creates a sense of direction. I want to guide the viewer’s eyes. 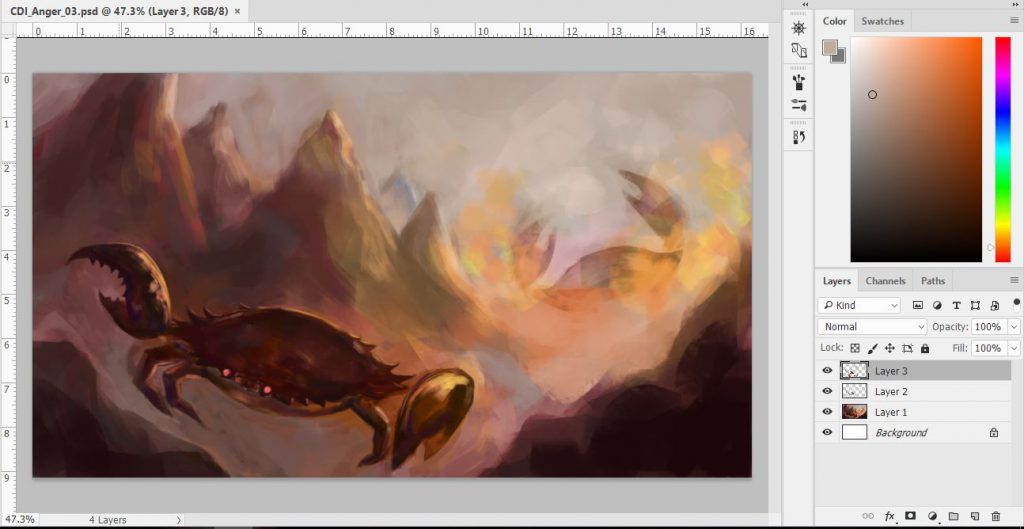 Adding in colours, and creating the fire effects as I wanted to see the big picture and how everything worked together before I decided which parts to focus more on or how I would place each mark to bring out the painting. 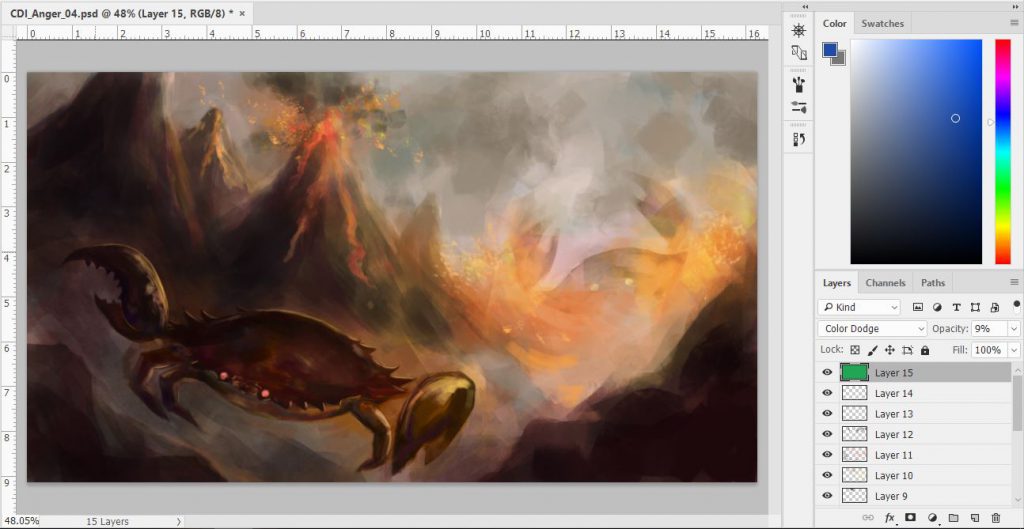 Darkening, adding in details to create what I had in mind. To fix the colour balance I added a green layer over. 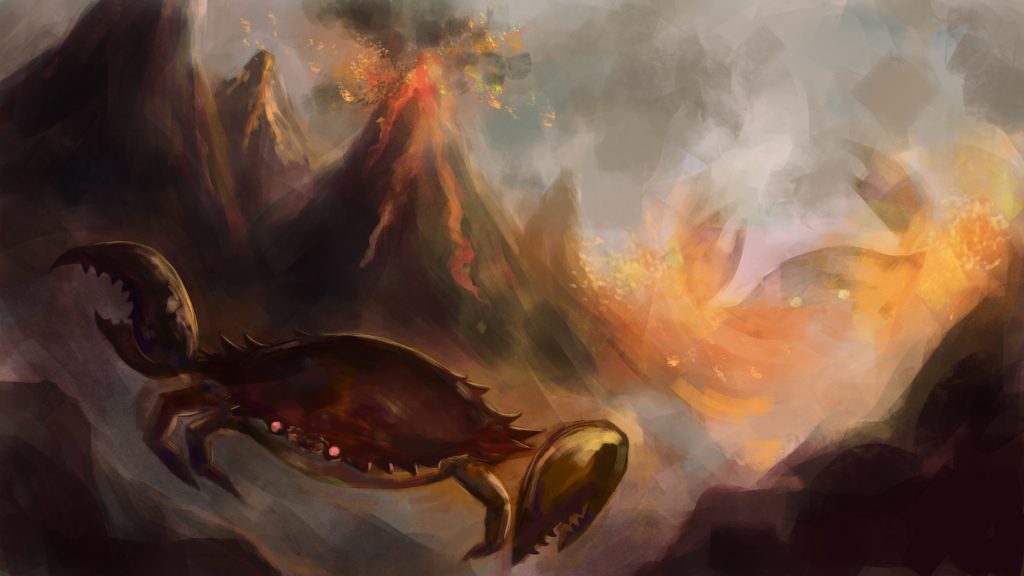 I added volcanic eruption and the implication of fire into the image. The contrast helps to guide the eyes from the right to left, the path I crafted out by placing rocks near the crab and in the corners of the image.

It took me the longest to figure out what taste sadness will be. Bitterness or just the taste of alcohol? (so literal -.-)

Anyways, I realised sadness is more like bland and emptiness.

Hence, I decided to make use of the skeleton of a whale.

Whales often sing under the ocean, but their cries are all different so sometimes they don’t get responses.

The idea of emptiness reminded me of the 52Hz Whale. Thus I decided to use a whale skeleton.

It’s been nicknamed “the loneliest whale in the world”. It sings a song like no other. Some say it wanders alone across the Pacific Ocean, crying out for companionship that never comes.

I wanted the skeleton to be the main focus but I realised if I were to position it at an extreme angle, the audience may lose the idea that it is a sea animal (whale)’s skeleton.

So I ended up with a centralized composition with the focus in the center. It is quite flat so I tried to shift it 1/3 lower in the image. 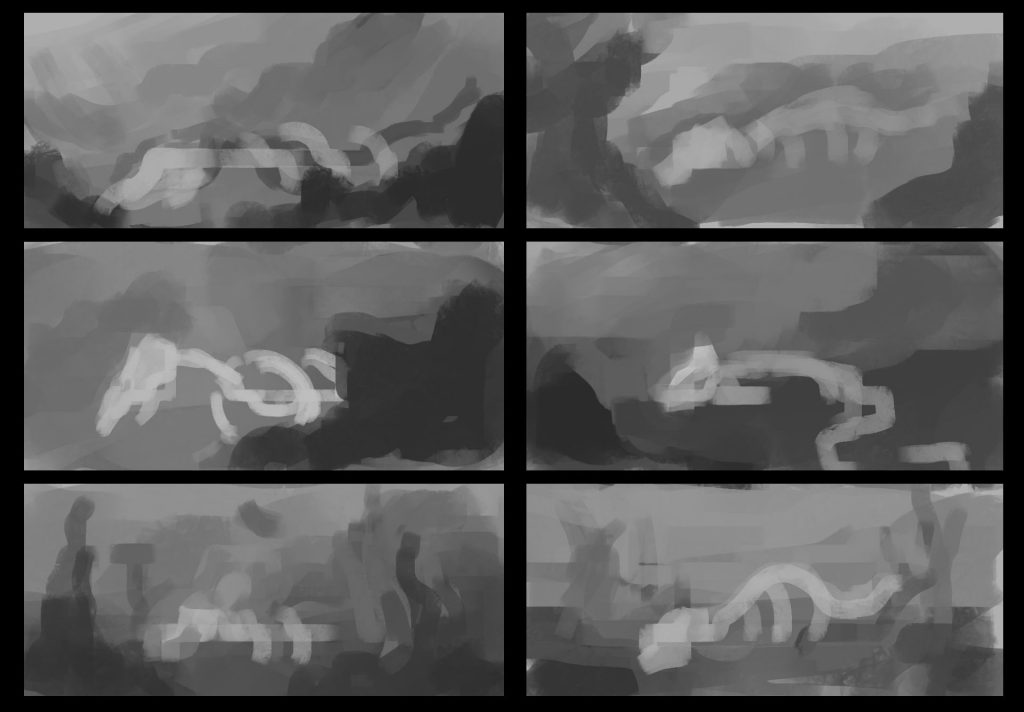 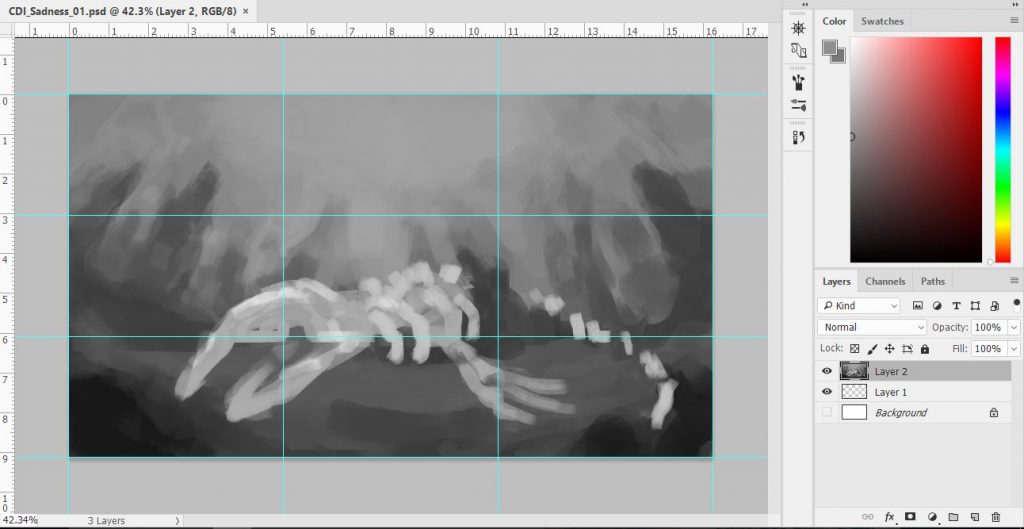 1: Blocking in the shapes and values. I blocked in the background in a way that the corals and rocks behind create a nice curve and lead the eyes down to the focus of the image. 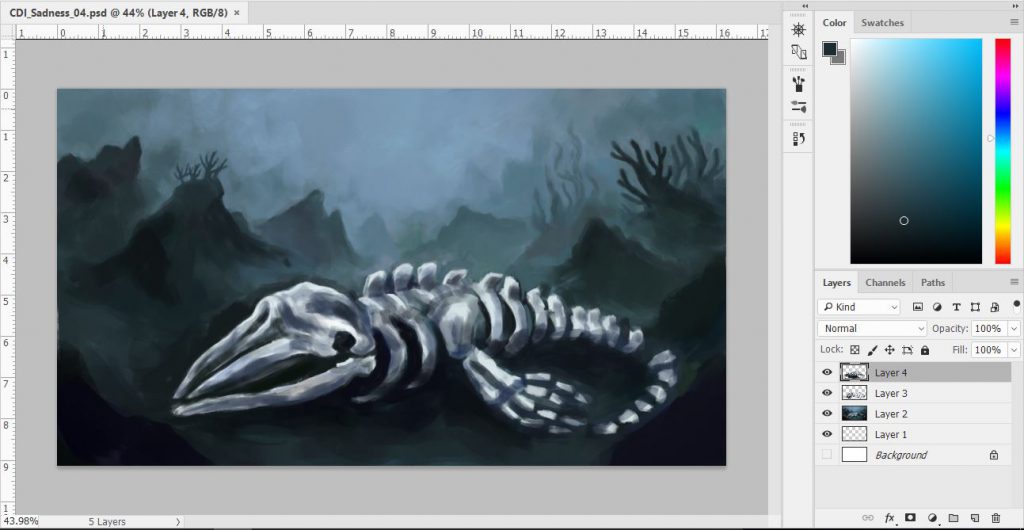 2: Adding in colours and blocking in the skeleton. It was quite difficult to paint. I had to google for a few minutes to find what I need and understand how the whale’s structure look like. I rendered the background and worked my way to the front. I also had to make sure the overall image is balanced. 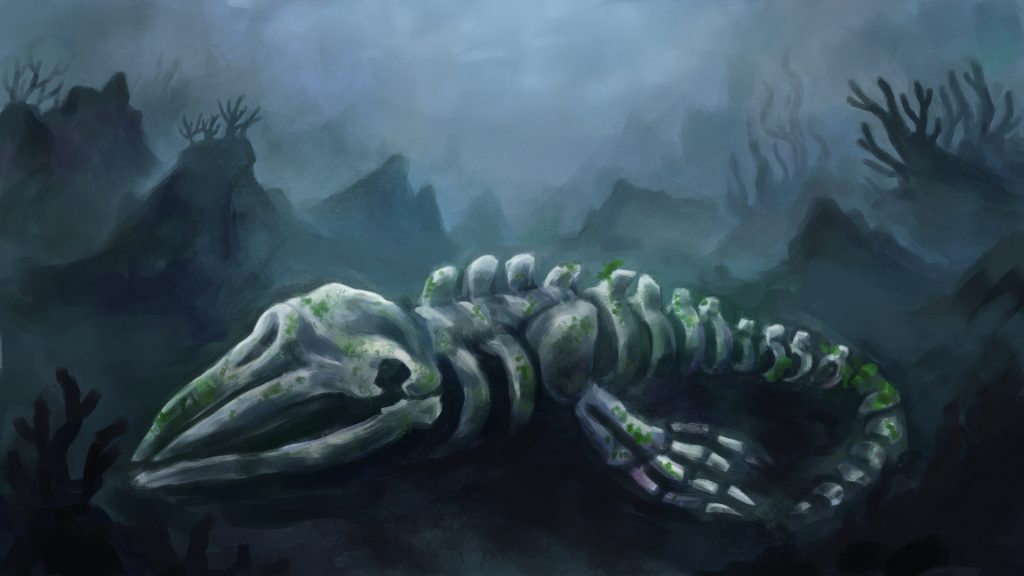 Blue is a colour we often associate with sadness. Thus its the main colour I used but I used a grey tone blue instead of a saturated blue. I believe a grey tone blue helps to set a sorrowful mood. It creates this lingering sadness. I think sadness is an emotion that lingers rather than something that comes and go very quickly.

I also added in details of aquatic plants growing on the skeleton to suggest that it has been there for a very long time to tie it back to the story I based this painting on.

I must say I had a lot of fun painting all 4 emotions. I think this project gave me a platform to truly start digital painting. On average I take about 5-6 hours for each painting? I got faster as I progressed I think?

A few things I realised from this project in terms of my own technical skill:

At the very least, I am glad that I challenged myself and used Photoshop ONLY throughout the process.

Previously I was afraid of Photoshop because there are so many things I do not know and It was overwhelming. I’m glad I managed to enjoy while picking up Photoshop.

I think the only reason why I did not mess up too badly because I liked watching digital painting process videos since a long time ago and it was helpful because I try to apply what I saw.

In terms of concept, I realised sometimes I try to do everything but it really shouldn’t be the right way. I should just be focused on the project: the goal of it and develop from there.

More specfically on this project:

Establishing mood and atmosphere requires careful thought and manipulation of composition and colour.

I had to keep asking myself the main purpose I want to achieve in the paintings. Whatever I chose to employ or art direct in each painting has to help achieve this aim. Sometimes I get distracted by the details in the paintings but I forced myself to zoom out to evaluate the entire image.

As for the naming of files, I named the final files: DN1013_Assign01_(Emotion)_Final

I only saved the jpeg after I checked through everything.