Task 1: Object and representation of self 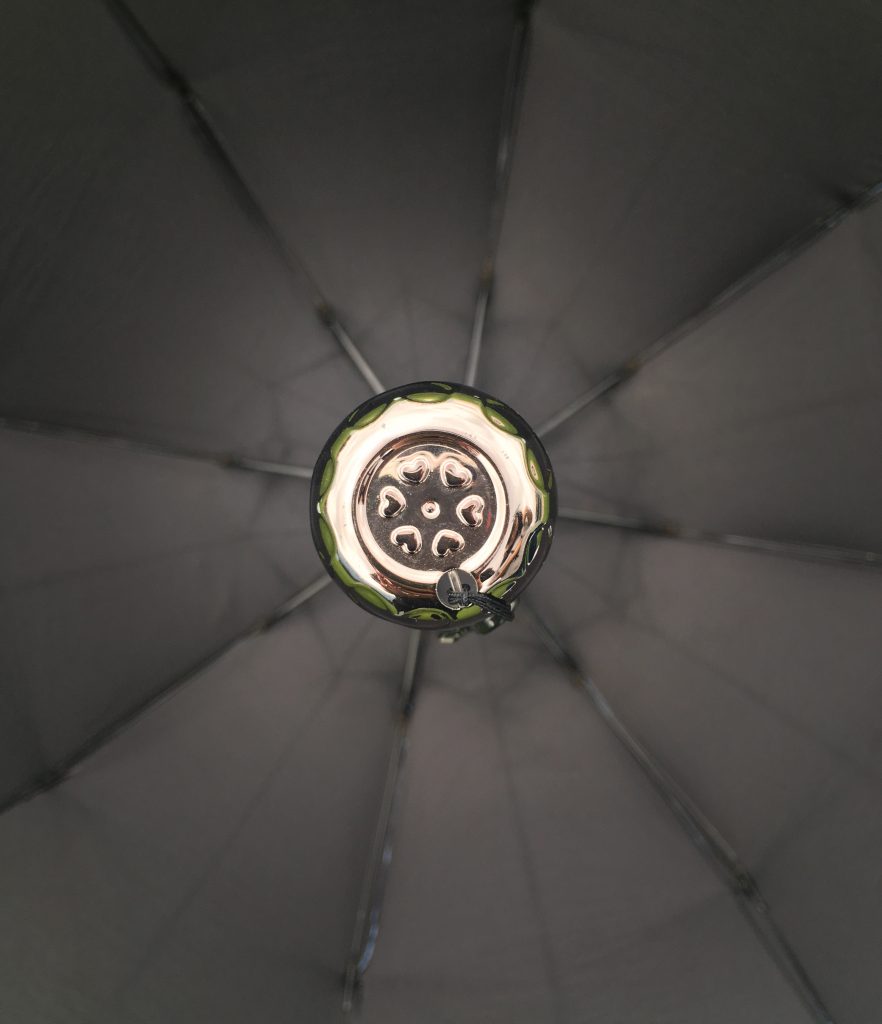 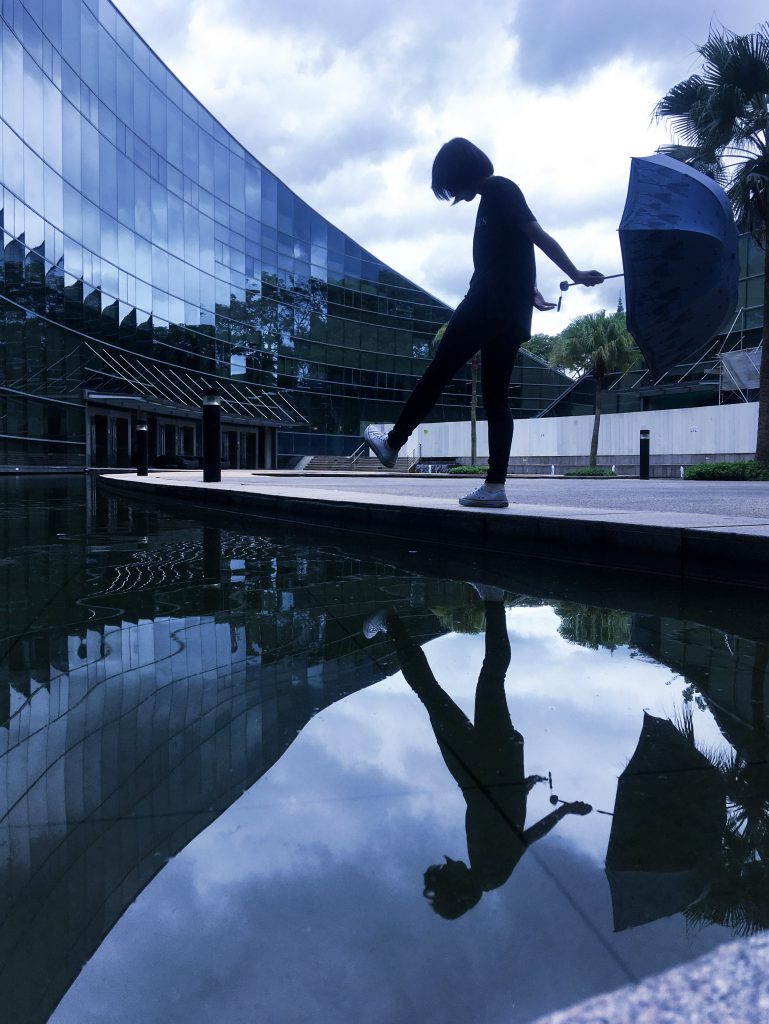 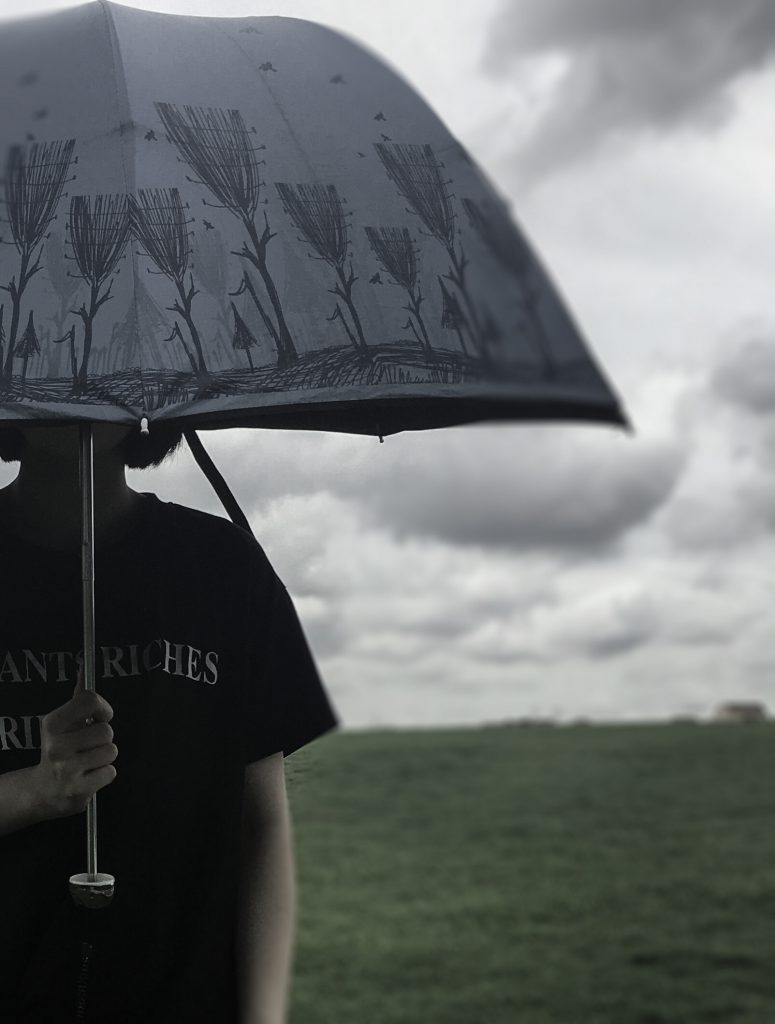 There is a saying that goes “you know yourself the best”. I think it really depends on what we look at. A person is constituted by ones experiences in life.

To me, each man is like a book. Every letter, punctuation marks out their life and defines who they are. Each chapter is a record of one’s interaction with certain subjects and others. Every one of us have our own story.

I reconsidered my background and looked for one thing that marked me out as a sore thumb in the crowd.

A long word that floated over my head, re-used over and over again by my parents and doctor.

Due to this genetic (since my cousin also suffers from it) I get sunburns and rashes very easily, perhaps also because I have sensitive skin.

However when I was younger it was not so significant, only in recent years I started having terrible rashes and sunburn. The problem escalated in the past 2 years perhaps also due to stress.

Now I cannot live without an umbrella.

My condition was extremely unstable, having flare ups from time to time. Direct sunlight and heat causes my skin to react.

Technically there is no cure.

I am a modern vampire, one that lurks in the shade and not in the light, one that lives under the umbrella and not on human blood.

The umbrella is something I had to bring around with me as long as I step out of the house, regardless the weather.

There were no edits made to the photo, I only cropped it.

I wanted to leave it entirely untouched to show my raw emotions.

The reflective portion shines, just like how I think my friends are to me. In a way, they are also my light. The black inner surface of the umbrella is used as background to contrast with it. It also resembles my pessimism and mixed feelings. Most of the time I only had negative feelings. (Depressed, gloom etc)

The handle is the part where I hold onto when I use the umbrella, I wanted to show that I also “hold onto” my friends as their care for me is something I appreciate. I do not want to discard it. It reminds me that I am not facing my problems alone and they are there for me.

“I’m sorry that I’m both your umbrella and the rain.” -Tablo

Due to my condition, my friends and family are often worried for me. My extreme eczema does cause me various inconvenience, I’m glad that people often put in the effort to look out for me.

However it also makes me feel like a burden from time to time. I’m glad that they care for me and give me attention but also I feel guilty for making them feel concerned for me.

At times I feel really frustrated with myself.

I feel conflicted because I don’t want to affect them. I do not want them to place me before themselves. Or sacrifice things for me because they technically are not required to do all these things. At times I feel that their unconditional love for me is something I think I do not deserve.

Like the umbrella I also want to shield and protect the people dear to me as well. I know very well I am loved and I wish to show affection to those who try their best to help me. However I do not know how to express it properly I’m often frustrated with myself.

Although it was sunny, but it was raining inside my umbrella.

“When I don’t have the energy to cover you with an umbrella. I’ll stand in the rain with you.”-Tablo

I wish to be my loved ones’ umbrella.

However, not everyone would be kind. It is indeed rare for people to have such genetics defects and some often question whether it was real or not.  I try to avoid mentioning my illness unless I have to do it. I withdraw away and block out my surroundings, as if I cover myself with an umbrella.

“But you look perfectly normal”

The only reason I appear entirely normal is merely because I take medication or even suppressants (last resort) to be able to force my allergy down. I also had to put in extra effort in taking care of my body and health. I had to avoid fried food or food with high salt content as it upsets my water balance.

Another reason for this is also because if my eczema flared up, I would avoid going outdoors. I will just stay at home. So if anything happened I would not be standing in front of anyone.

I try to hide it.

The composition: created an intensity which I found mesmerizing. The way she cropped the photo added tension to the image. Although the portrait only showed half of her face, it created a heightened tension, forcing the viewer to focus on the face.

I wanted to create an oppressed feeling to emphasize on the concept of being “trapped” and “confined”. The umbrella fits the upper portion of the image, while the sky is entirely filled with clouds.  The clouds were also very low because it was going to rain soon. With the help of luck I managed to create the suppressed and suffocating atmosphere in this photo.

I desaturated the colors and made it dimmer. I did so by adjusting the respective items in photoshop using camera raw filter. I also use Iris blur to put more focus on me, which was the subject of this photo. I really liked using Iris blur, it creates a blurry look that add a hint of illusion and uncertainty. It illustrates my insecurity about the whole ordeal.

Sometimes I hide, as a coward, away from the harshness of this world, I turn a blind eye to things. It is the same when I angle the umbrella in a certain way, part of my vision will be blocked out.

The flamingo is the main focus of the photo, however there is also a bear structure which was positioned in the foreground. Although it was closer to the viewer, the viewer’s eyes eventually settles on the flamingo. I found this layout and composition extremely interesting. Therefore I tried a similar method of shooting.

The reflection takes up the lower section of the photo, which would (hopefully) captures the viewer’s attention. The reflection leads back to the subject in the image. Which is the intended effect I wanted to re-create in a similar way.

I try to be optimistic and maintain a positive attitude towards my health. I look forward to the day I can walk outdoors without an umbrella and join my friends in outdoor activities. However it is a fact that I cannot defy reality.

I made the image slightly darker to bring in the mood. Despite my posture which appeared playful and carefree, the mood of the image is made to appear depressing. My reflection is also slightly distorted. I wanted to show how my own mind sometimes waivers. Sometimes I wonder if I will stay like this forever. It felt like I was telling a white lie to myself. I also added a blue tint over the photo to enhance the negative feelings (sadness).

Ideas/images that I did not use:

Photos I did not use: 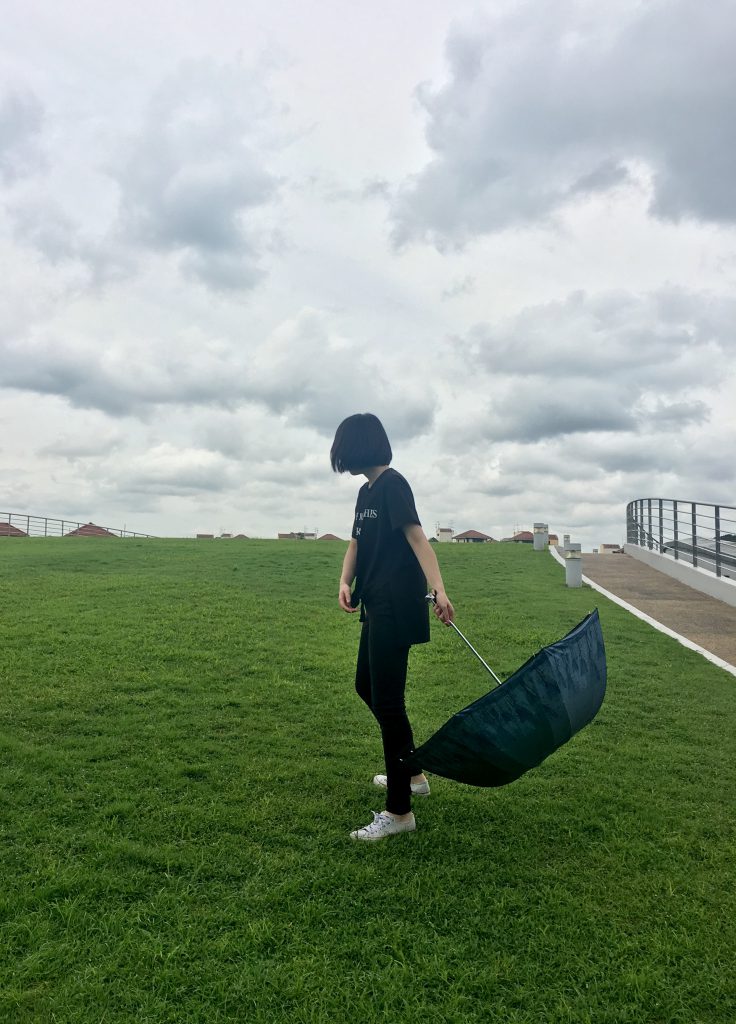 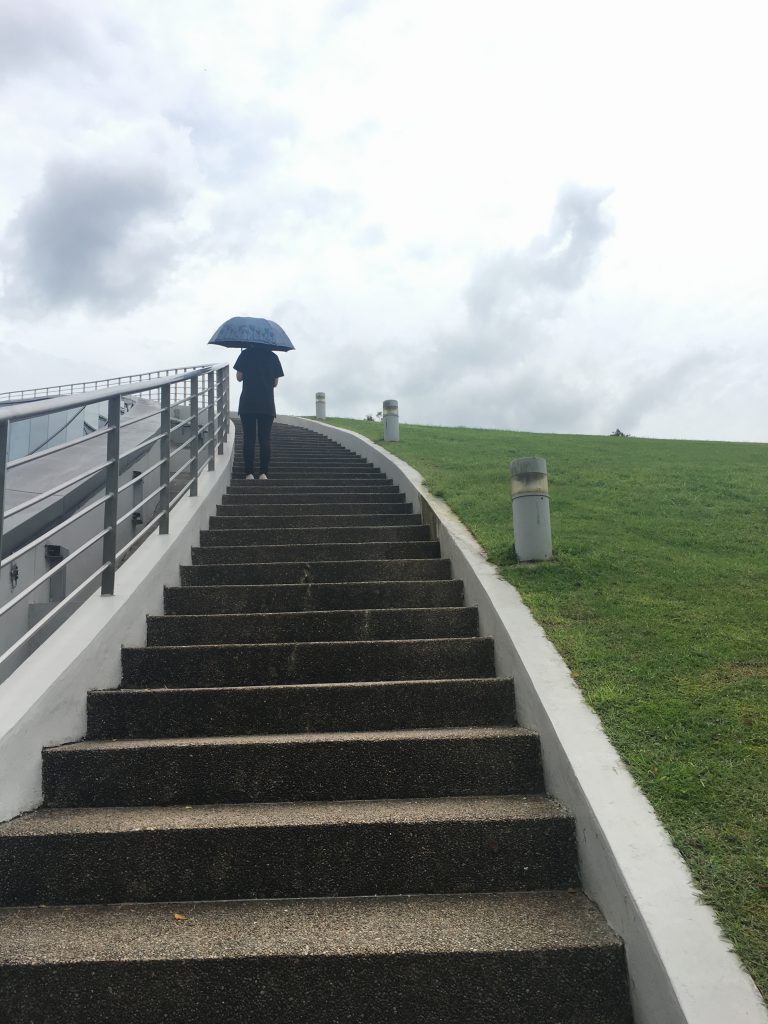 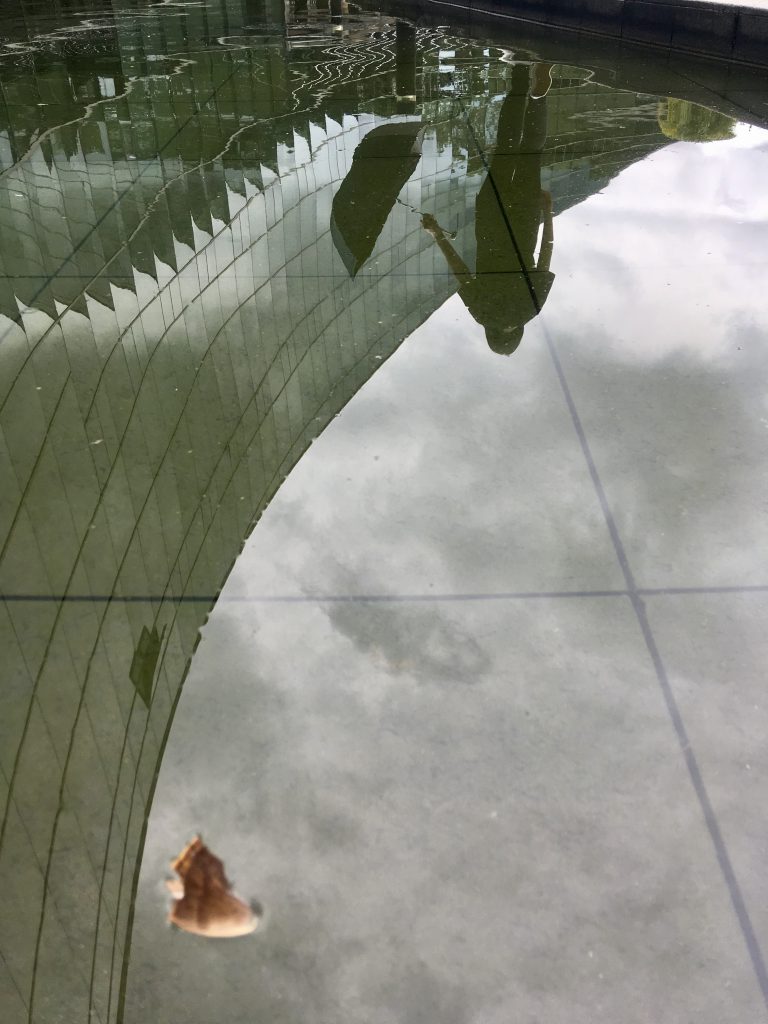 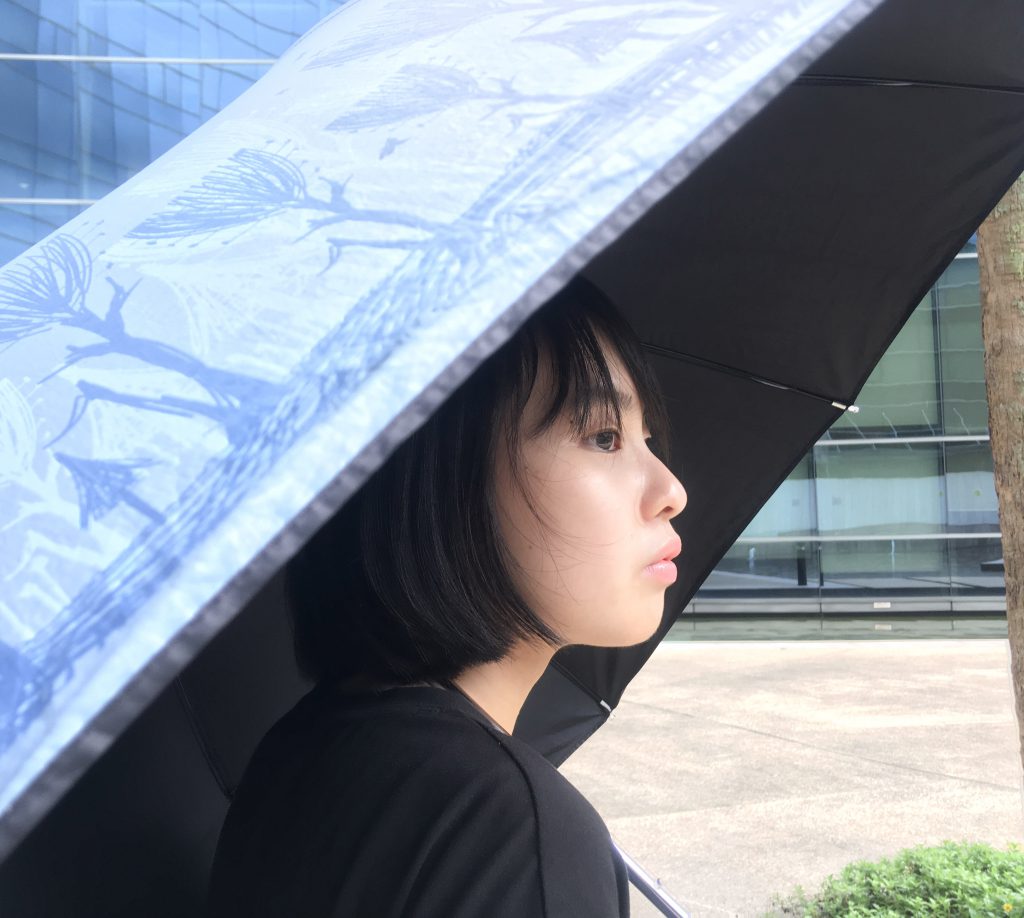 Personally really liked the reflection shot because of the composition. However because I had to cut down to 3 photos and I decided that it was not the best to show my emotions so I did not use it in my final work.