by HuiEn on March 7, 2018 in Assignment 3 Storyboarding Myths

I prefer Hayao Miyazaki’s storyboarding style because he presents the panels in a single column from top to bottom. It helps to make it clear and easy to read the panels since you just need to move your eyes down. In comparison, other ways like like horizontal ways of presenting is less appealing to me. Just personal preference.

There are notes next to the panels. It’s mostly about the details of how the frame should be presented and the key elements the animators should take note. It includes what kind of emotion the character feels.

In other words it elaborates on the existing panel.

I found the series of panels on the left very interesting. The ‘camera’ shifts from the surroundings to the main subject matter in the scene. He does not reveal it immediately, pacing the audience.

He also included SFX for the panels under notes.

Layout and composition are incredibly important when it comes to storyboarding.

Having the right composition helps to show the audience what is happening and evoke the right mood and reaction.

i wish i can go to the museum. cries. 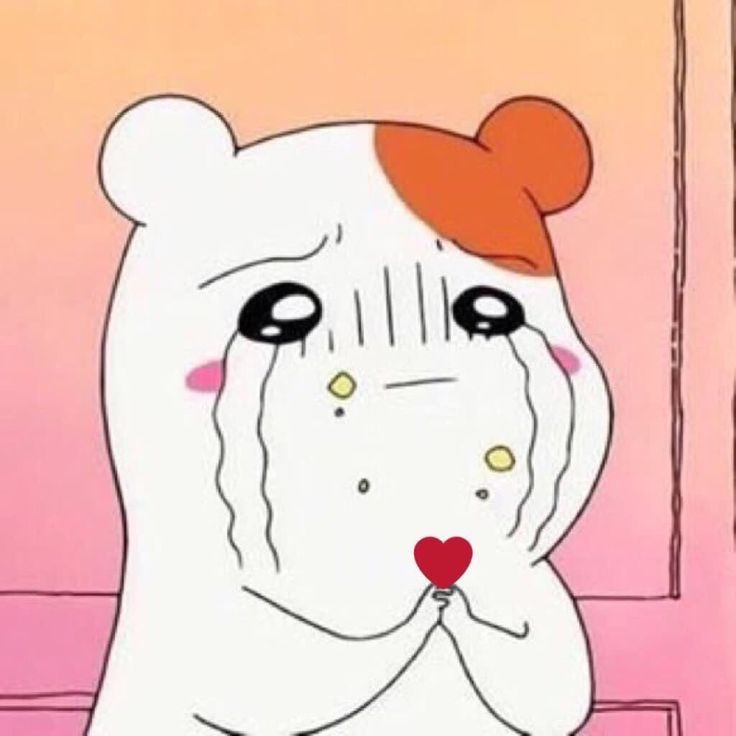 The storyline I got was

Once upon a time there was a Prince who lives in a huge palace filled with luxury items.

Although the Prince had almost everything he wanted, he was never happy.

and the words I got were

My group used random number generator to generate numbers for our words to make sure there is less bias.

I decided to come up with a few fillers before jumping into any ideas.

Almost forgot I had other characters to use:

I think the ending “he was never happy” suggests that he has lost something that could not be replaced. Thus I believe he either lost his advisor or perhaps a friend.

It’s probably going to be a tragedy anyway… I want to simplify some of the existing ideas above just so that it is easier to tell the story.

The more complex it is, the more difficult it is to tell the story.

Then the next question is, I think i am not going to reveal who the lab belongs to… I will make it suspicious that it could be both the guard and advisor.

I’m going  to do it as if I am really going to animate it. 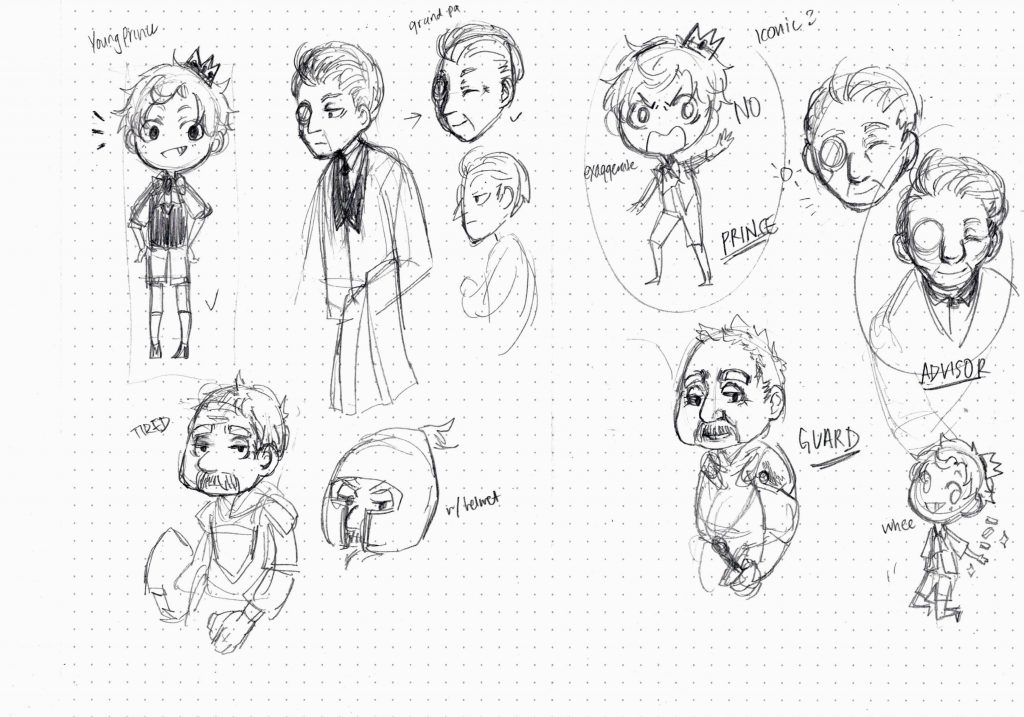 Flow of the Story

I wanted to use the lab idea but later on I realised… It sounds like shape of water so I decided not to do it and I came up with something else!

As I drafted my panels one by one I decided to change up some things.

The Advisor knows nothing about the nimbus and the guard does not show up… unless I want to do a close up shot on that but it will not add any value to the story since he had no role technically so I decided not to use him.

I kept most interactions between the nimbus and the prince instead.

The prince lets the nimbus return back to nature instead. I think the nimbus vanishing is abit difficult to show and it adds to the number of panels as well. Assuming I want the film to work even without voices or speaking then I will have to change it. 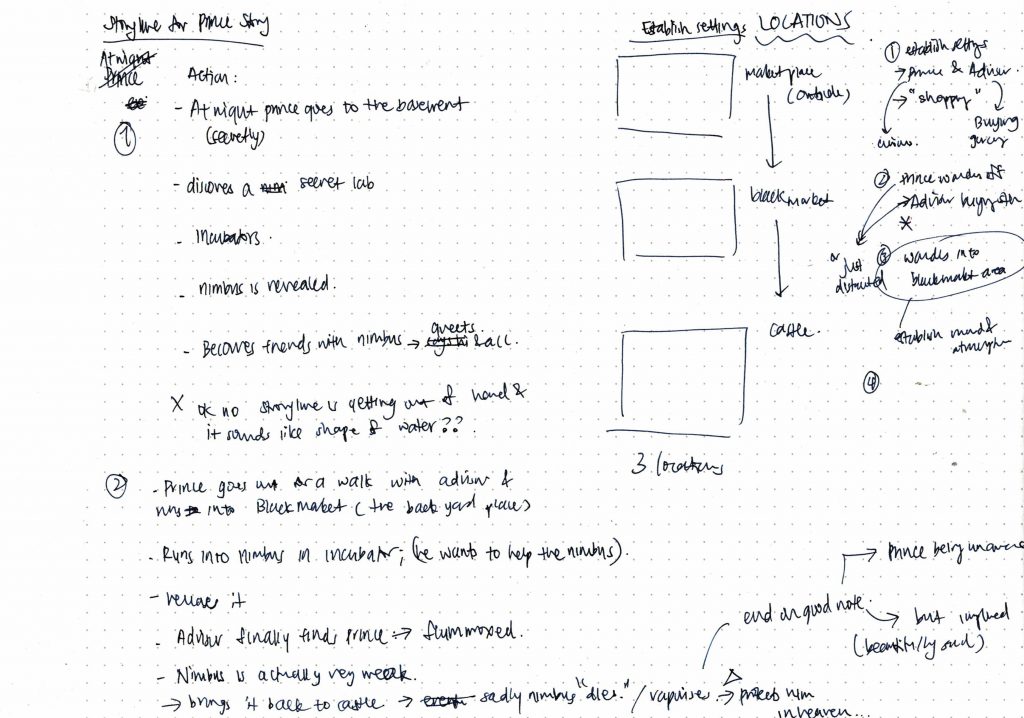 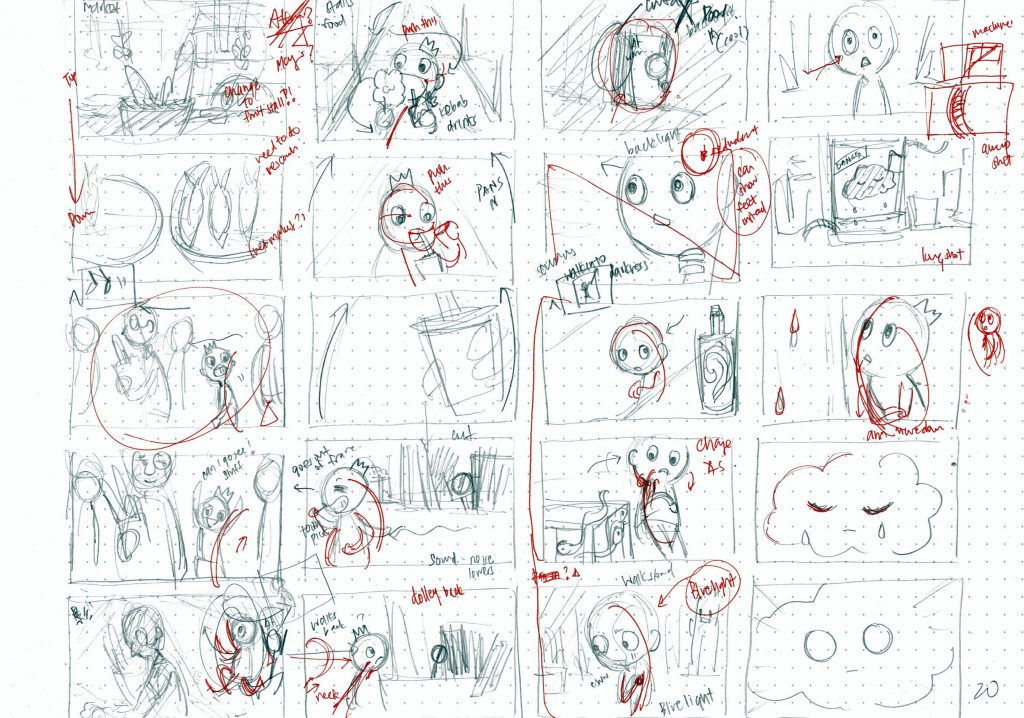 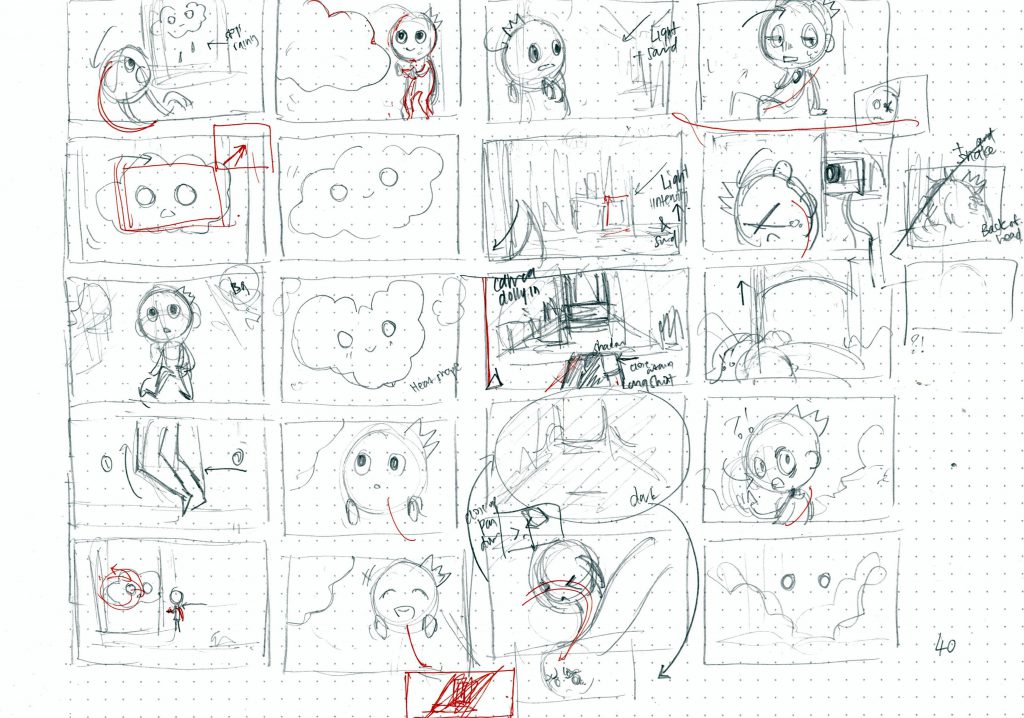 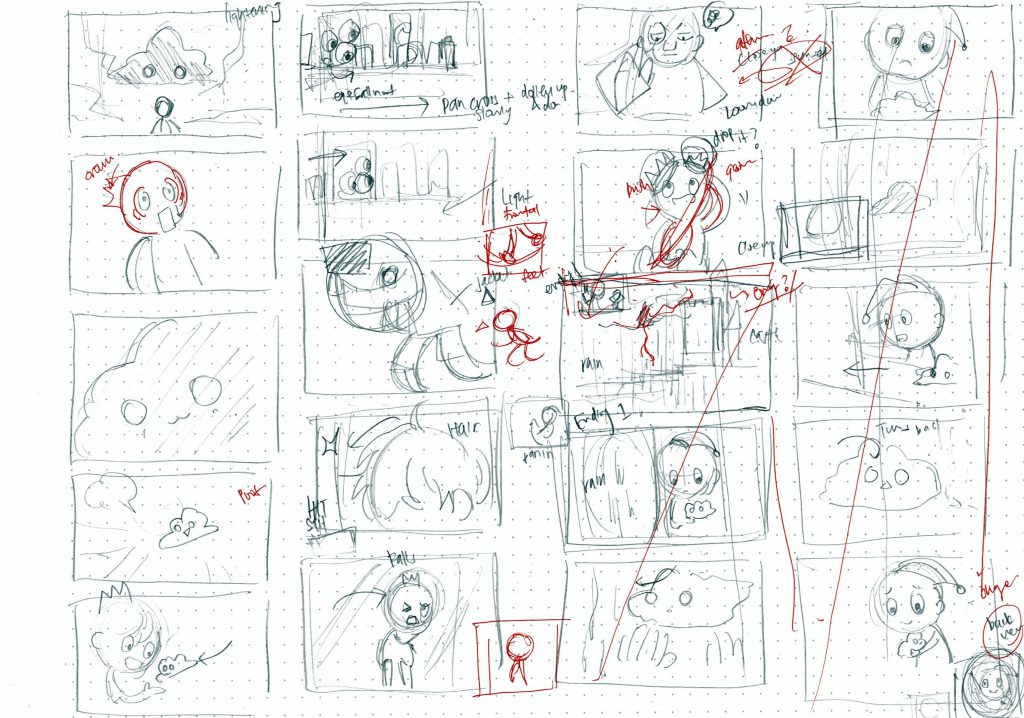 I reviewed the panels myself after a few days just to have a fresh look at it again. I also consulted some friends.

I took note of the line of action and flow.

I tweaked the story line a little too.

Many told me the ending was abit unclear and I personally felt that I kind of rushed it.

I took some time to consider other possibilities for ending:

Anyways I stuck to my original idea:

The nimbus grew weaker and had to leave.

However to show it, I had to either make the nimbus grow smaller or make it break apart.

Growing smaller is difficult to show on the panels thus I went with the latter.

In addition, I did not pace my viewers properly thus I will be adding scenes and the draft is here: 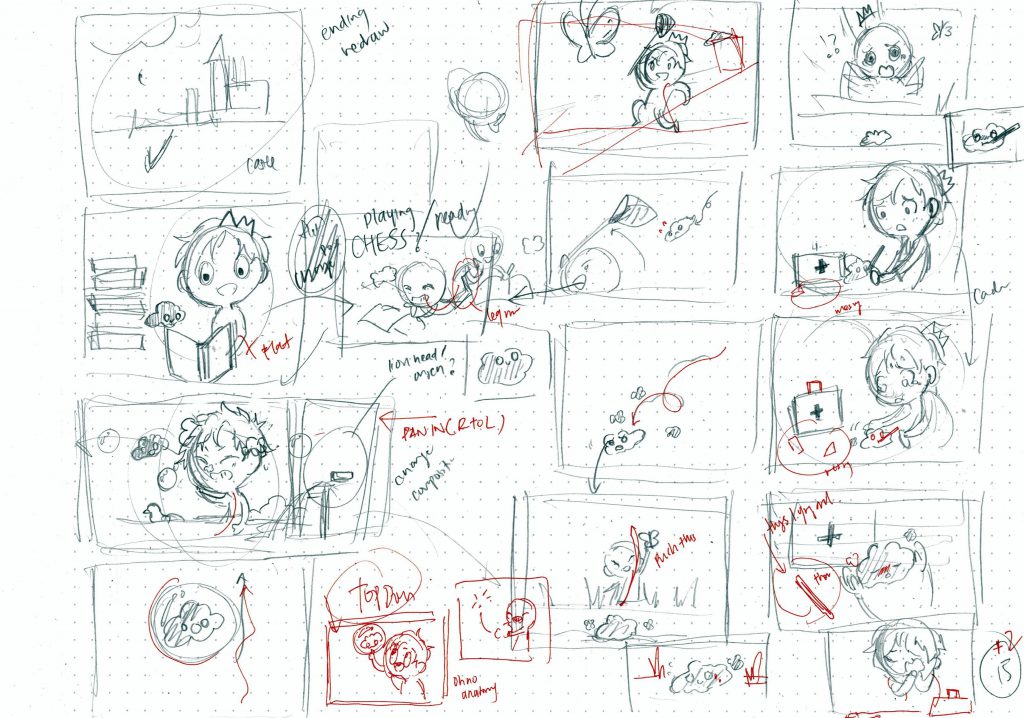 I decided to draw everything by hand since Miyazaki does it and I think it allows me to commit to my lines.

I felt that i had more control over the flow of lines as well as line weight. 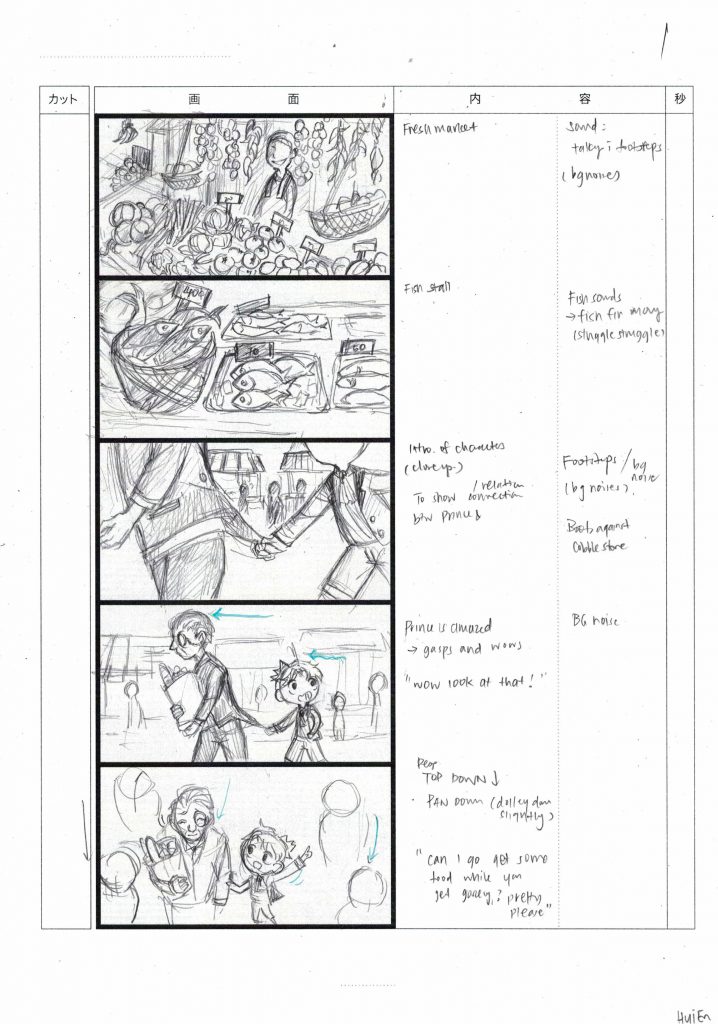 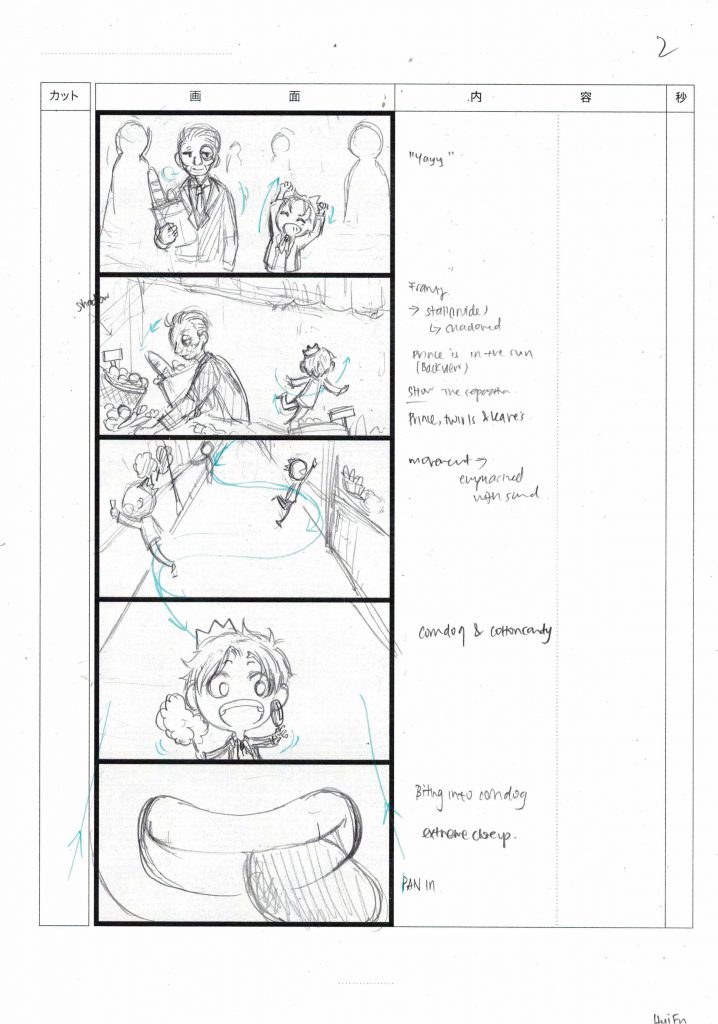 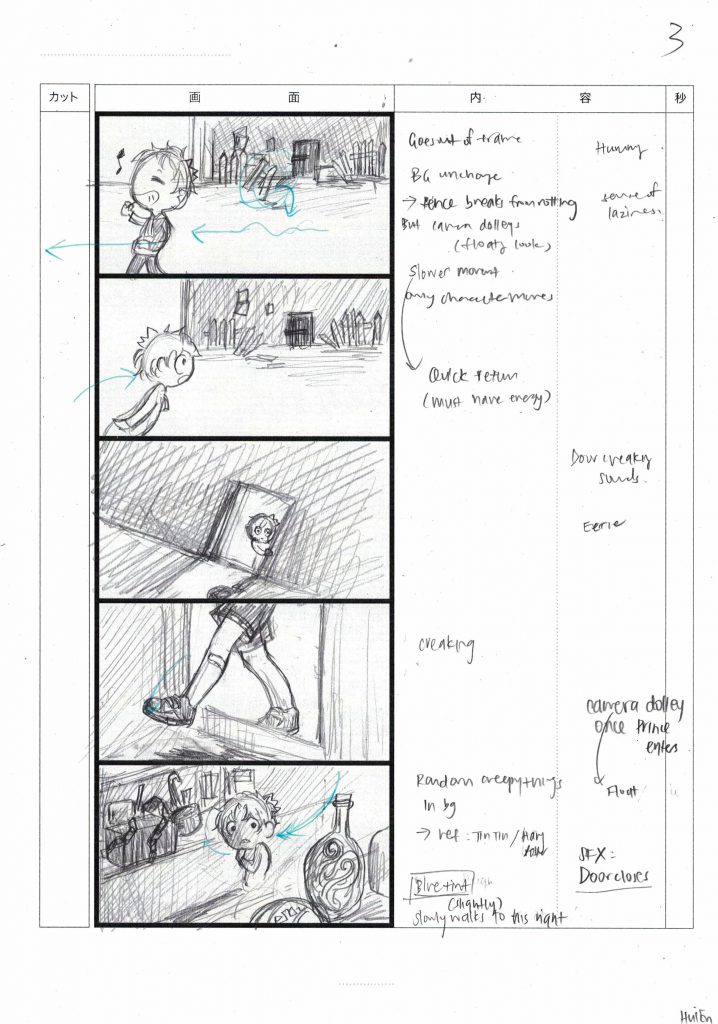 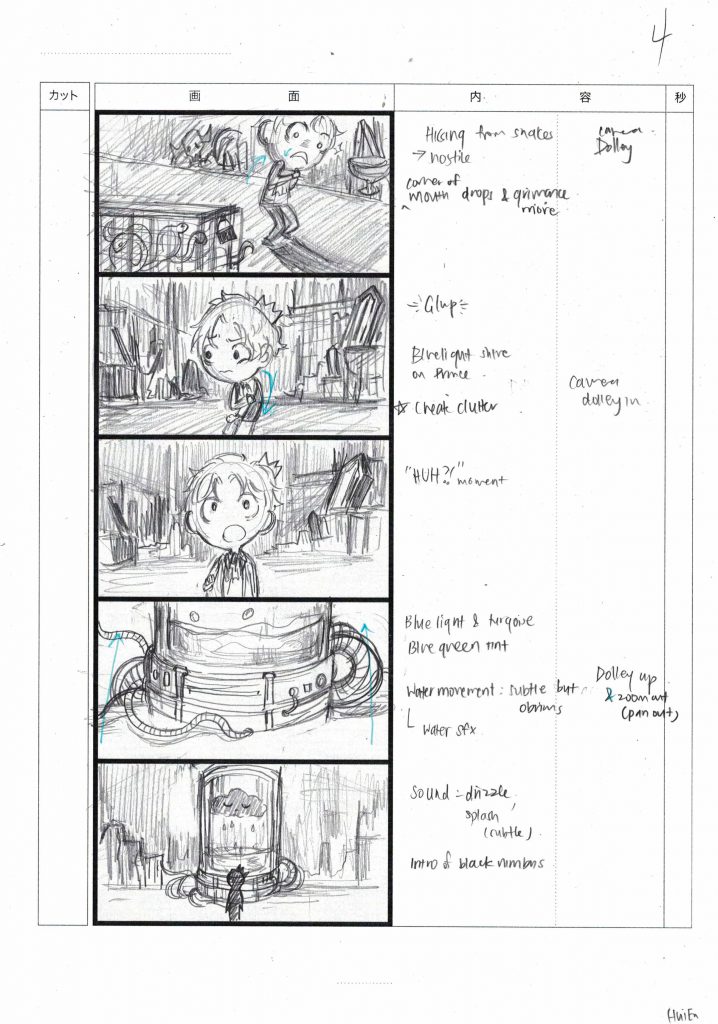 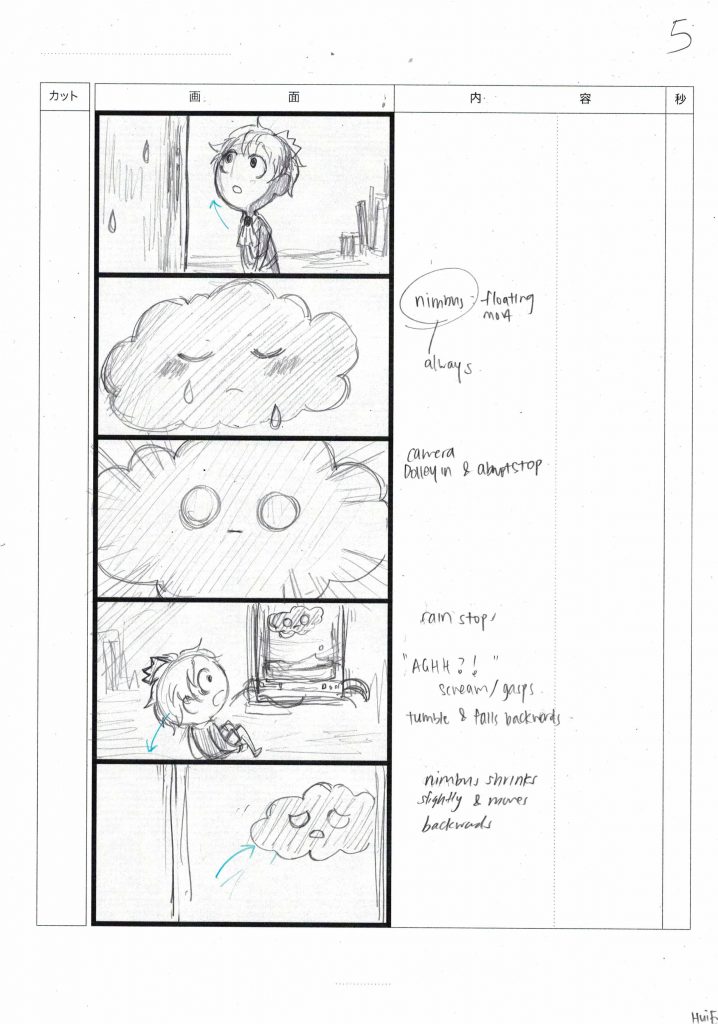 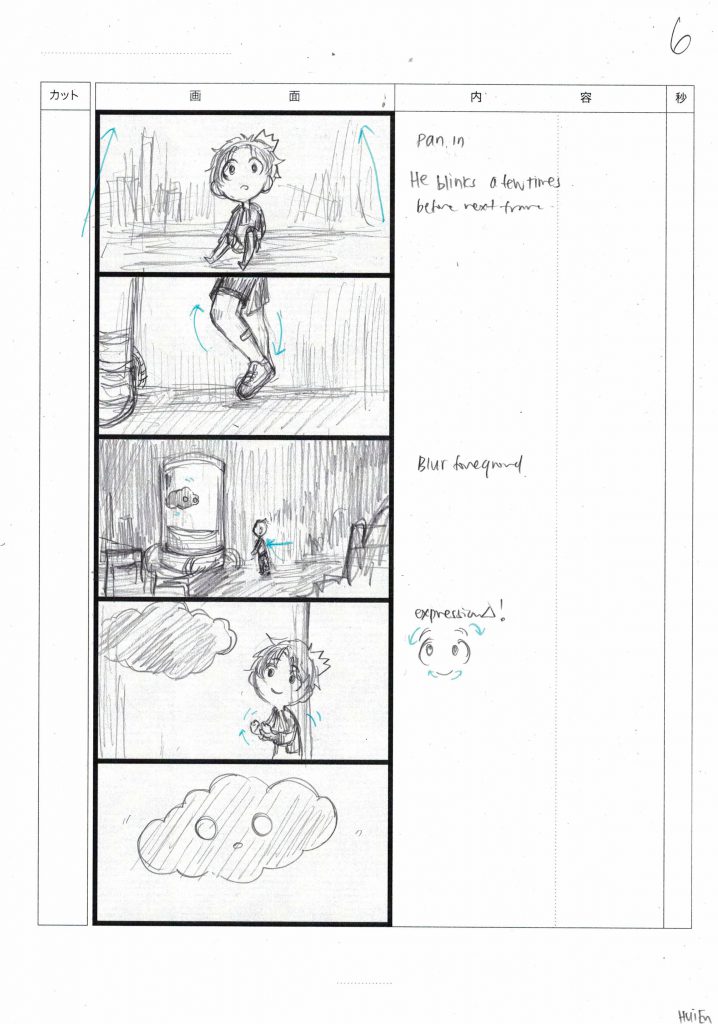 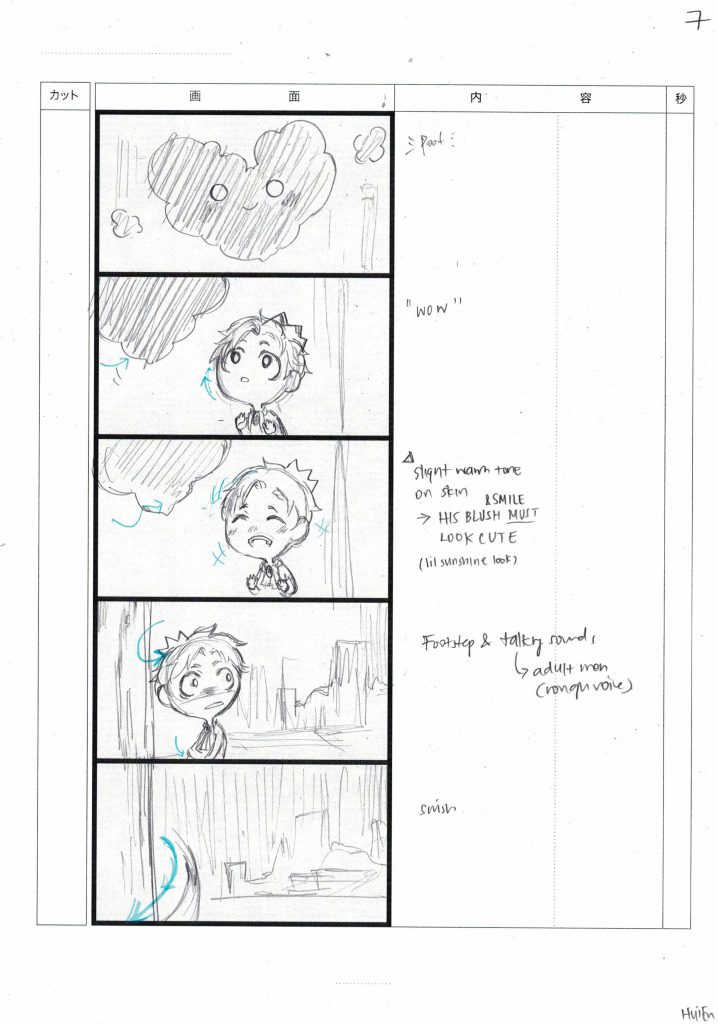 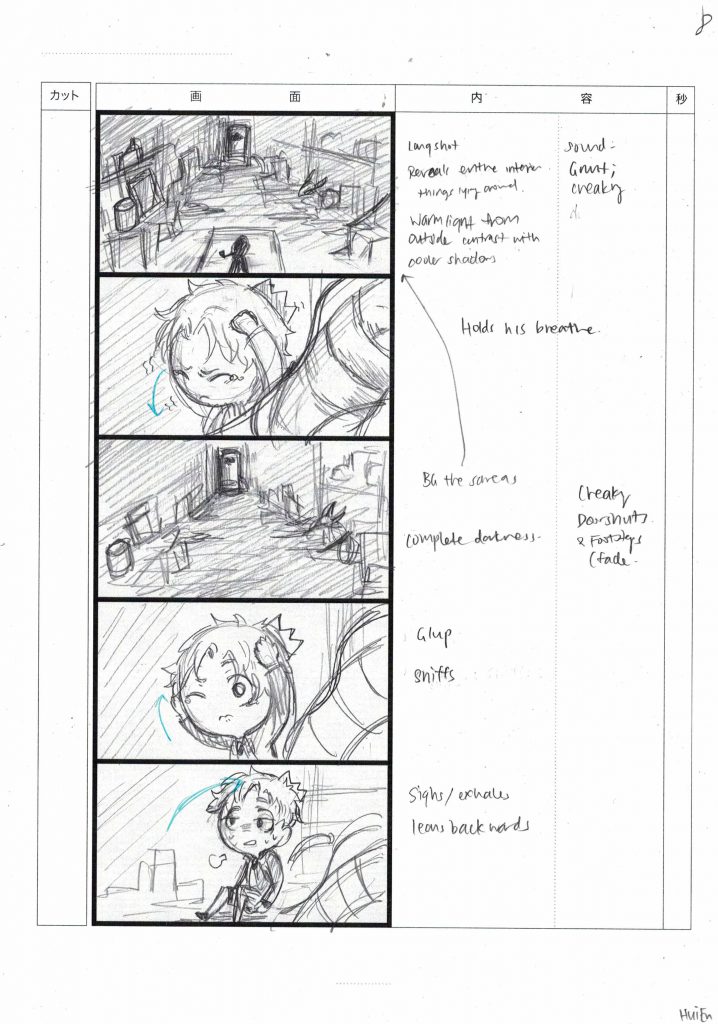 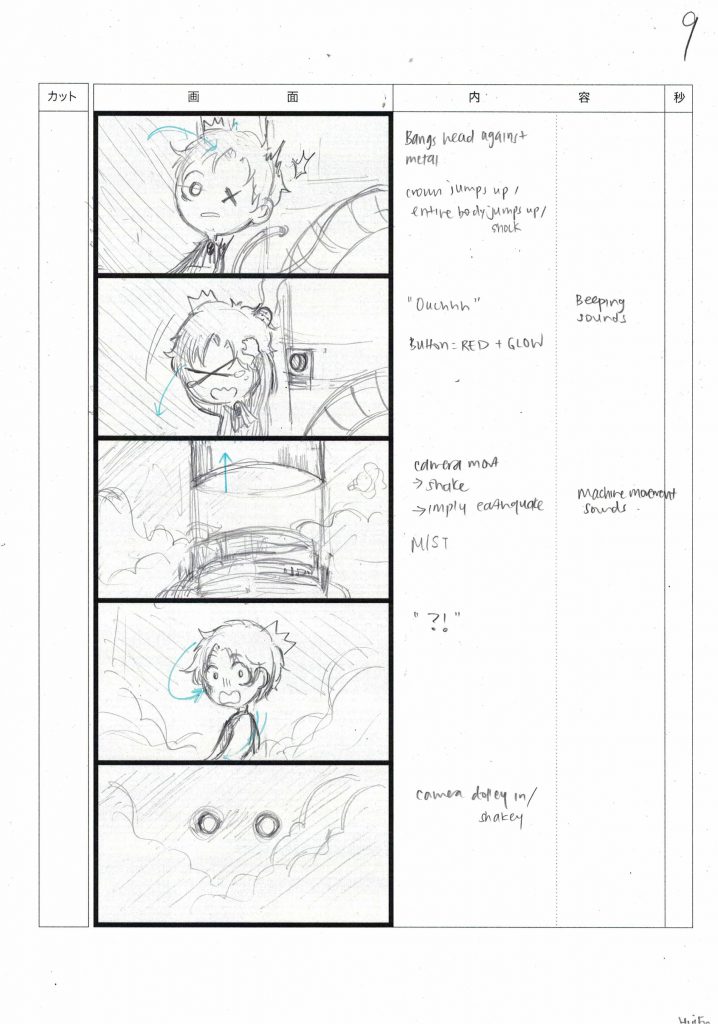 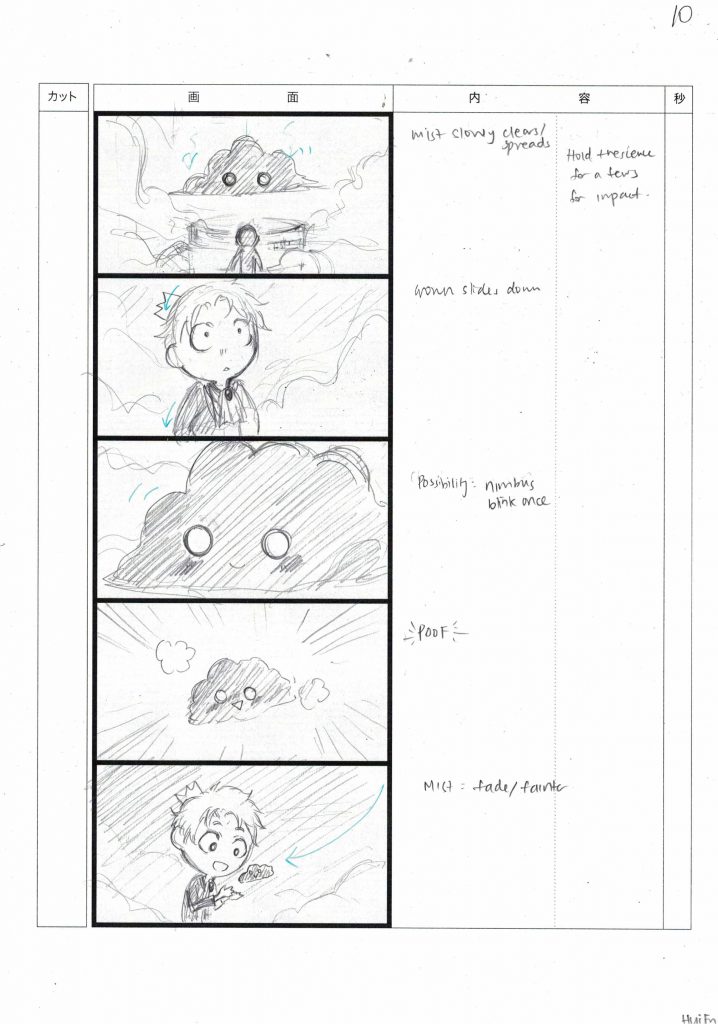 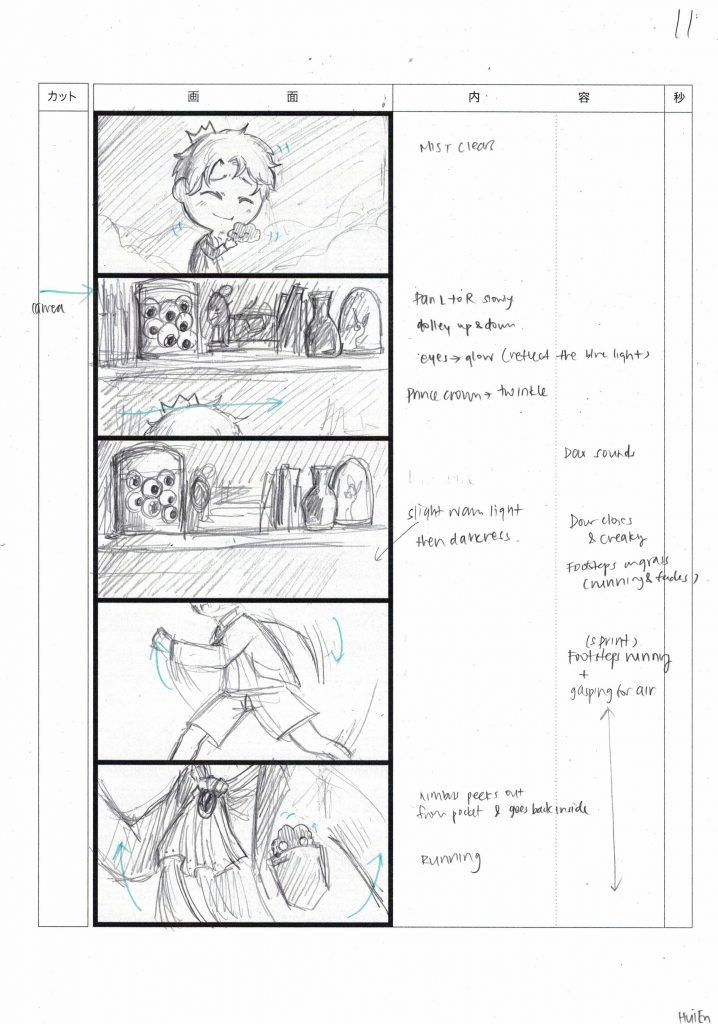 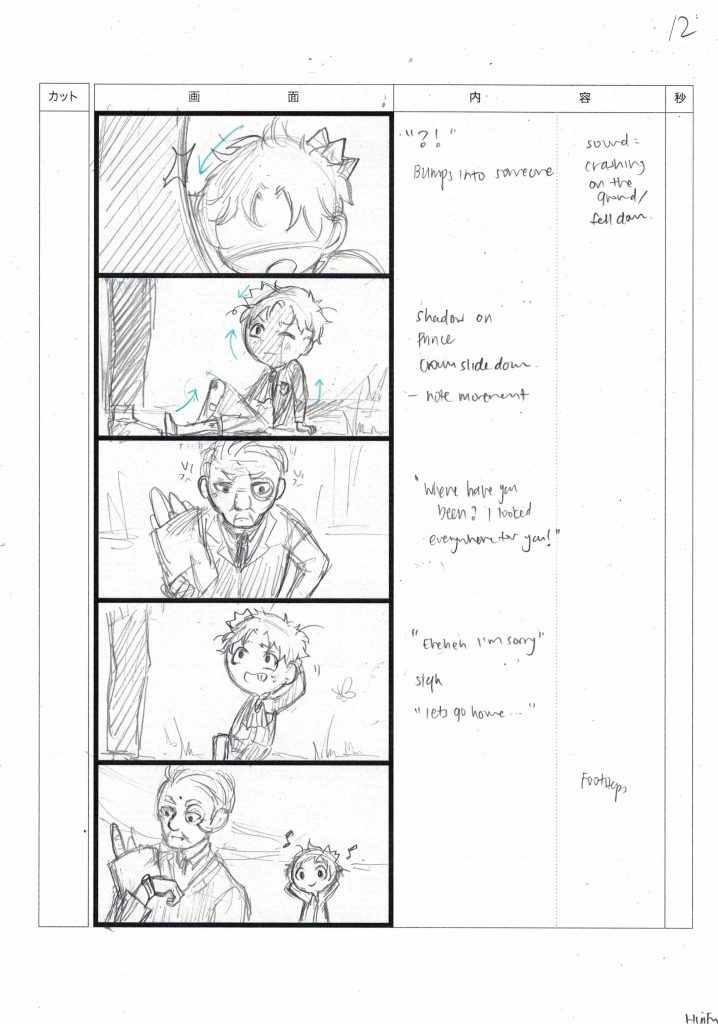 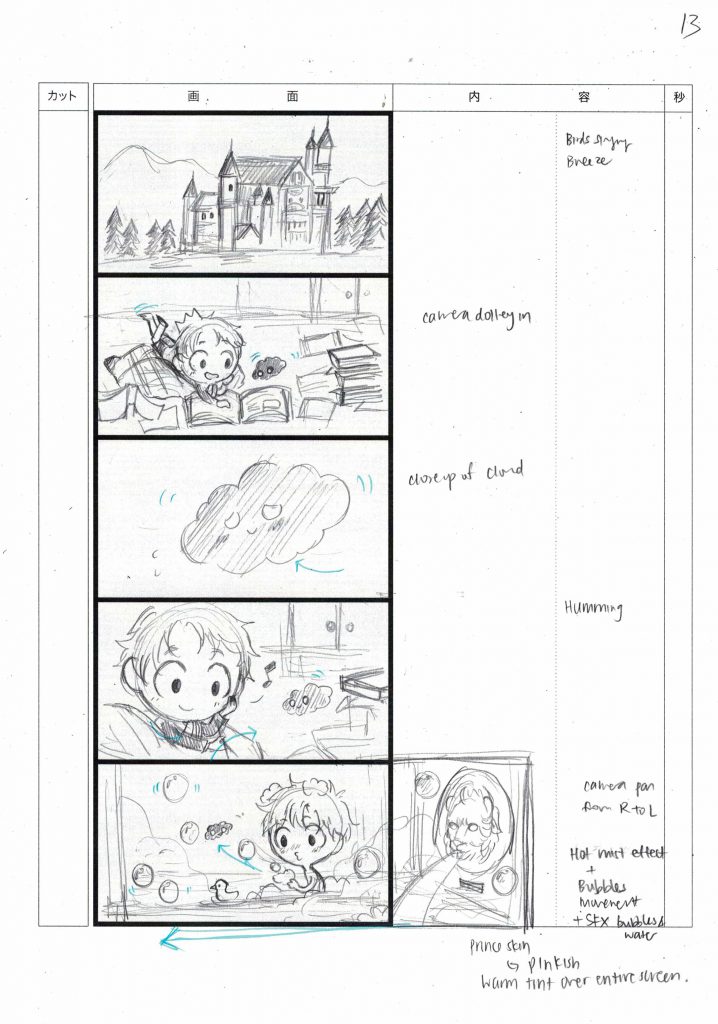 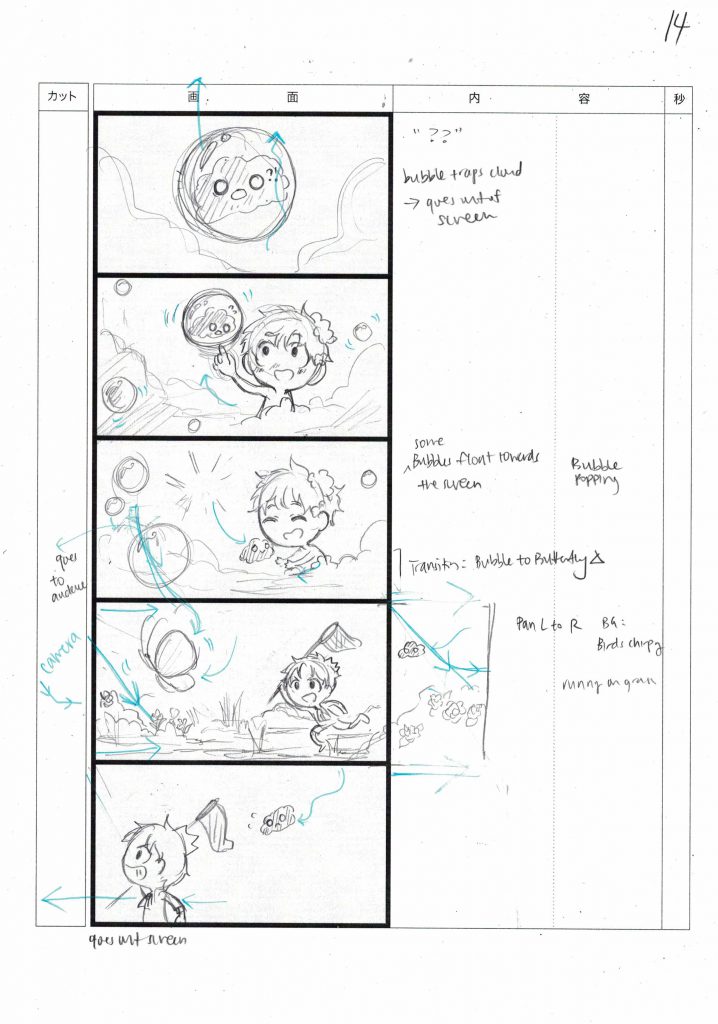 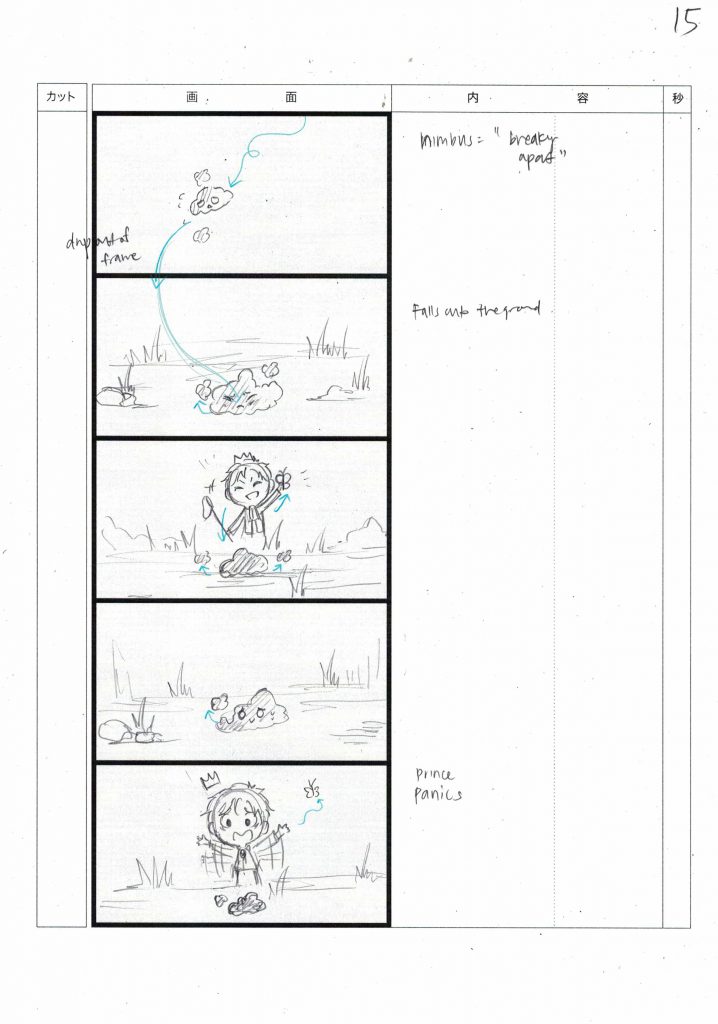 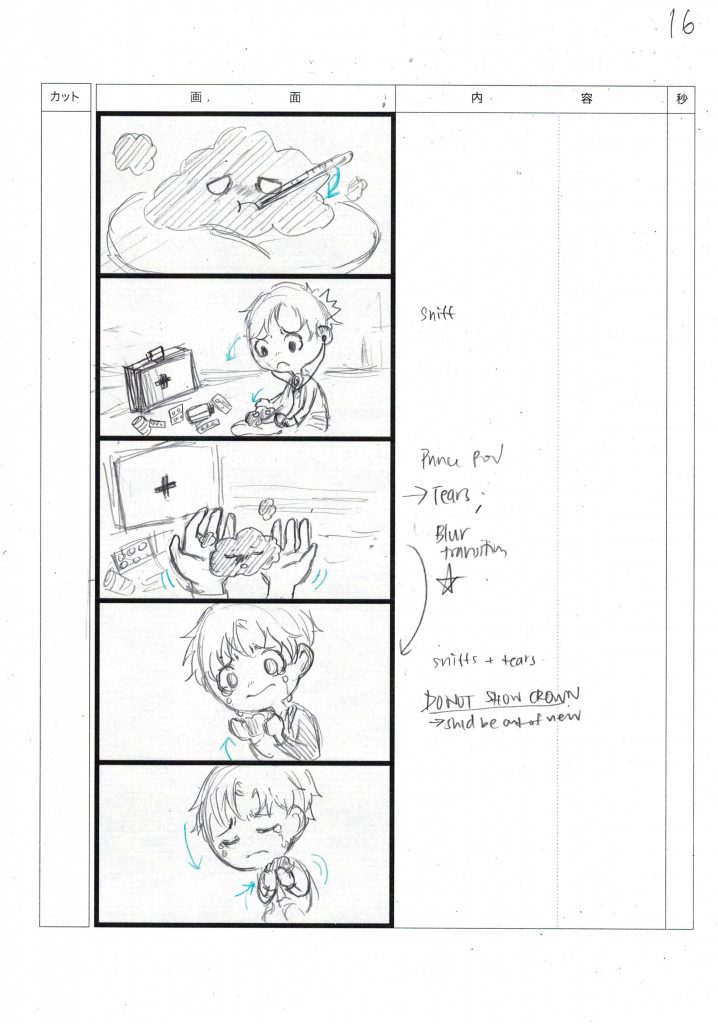 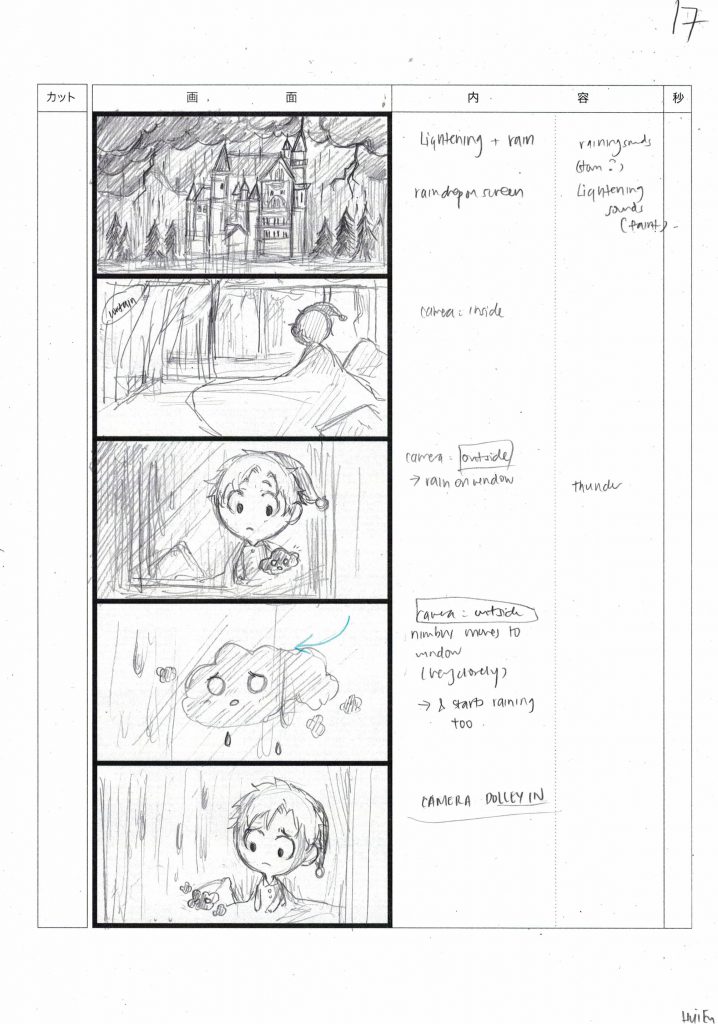 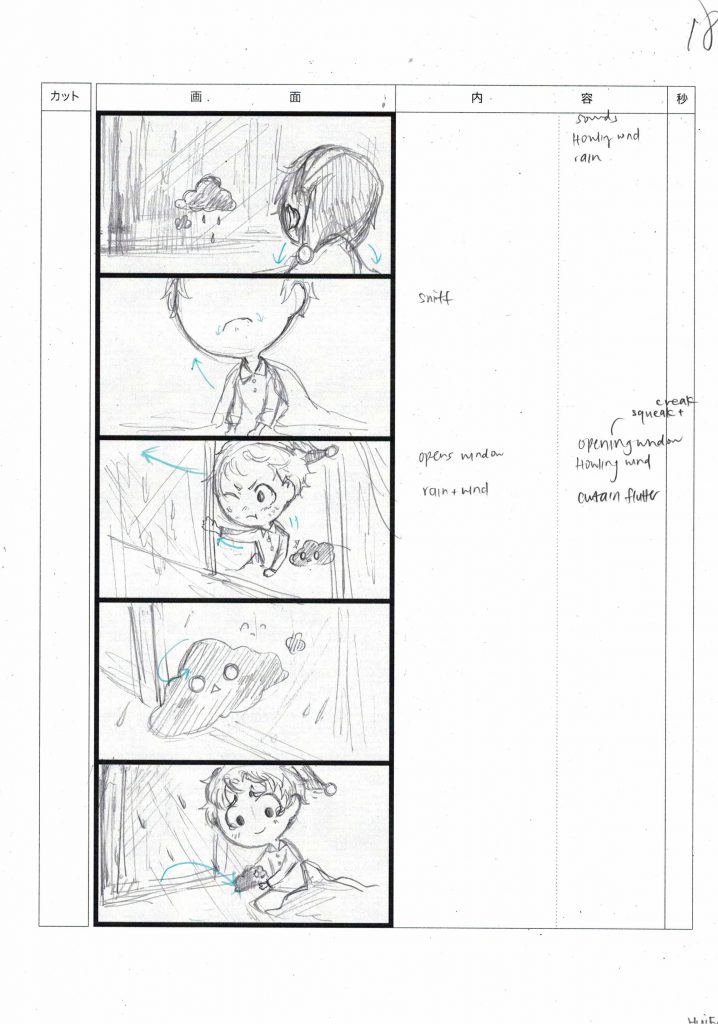 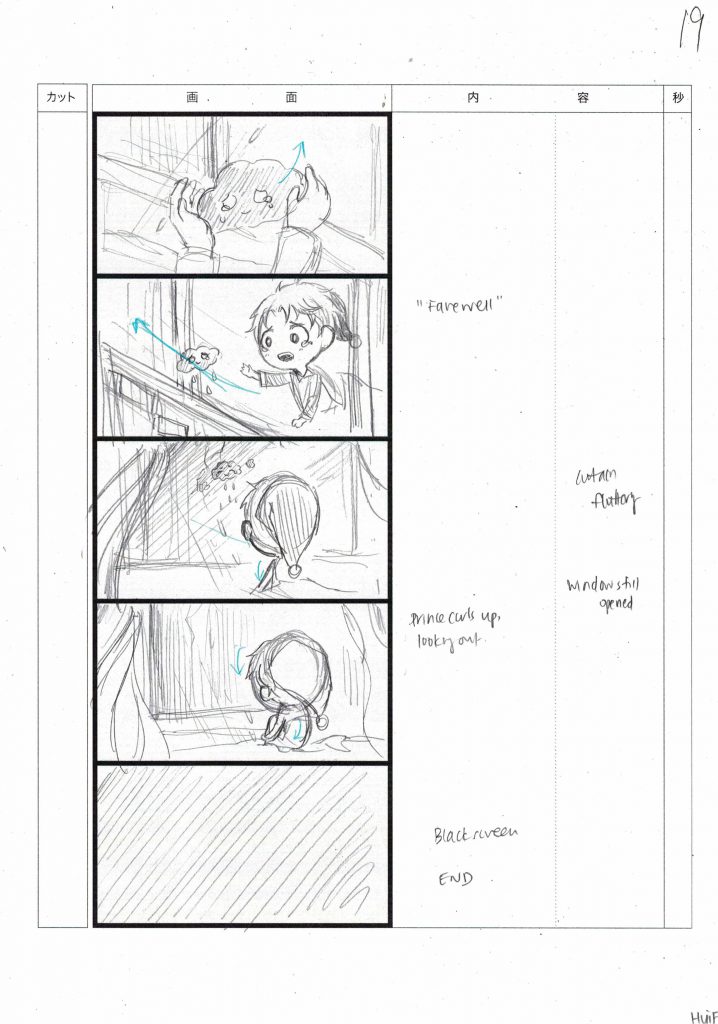 In the end I exceeded the minimum number of frames by double HAHA.

I am willing to do anything to push my story.

I learned how to build rhythm in the flow of the story, slowly reveal what is happening.

I finally learned to appreciated storyboards. While I was doing this I watched some interviews and videos about Miyazaki.

I was and still is deeply moved by his passion. For each film, he storyboards everything and tries meticulously to make the story better.

He redraws and retries a few times just for merely one scene. For every film there can be 700+ panels. The dedication and passion he has for film making is both inspiring and impressive.

His approach towards storyboarding allows him to present to the audience the best emotional experiences.

His ability to convey empathy and emotion is delicate, elegant and ambivalent.