In the process of searching on Japanese screen art, I have gained a better understanding and insight in history of making traditional Japanese screens, especially Namban screens. It is so interesting to see Japanese people’s reactions from the screens when they first saw exotic foreigners. And also I was very impressed by Contemporary Japanese screens and how Japanese artists revived it and gave a new life to traditional screens. In addition, it inspired me to think about Chinese contemporary painting and how I can contribute to it, which I have little knowledge in. 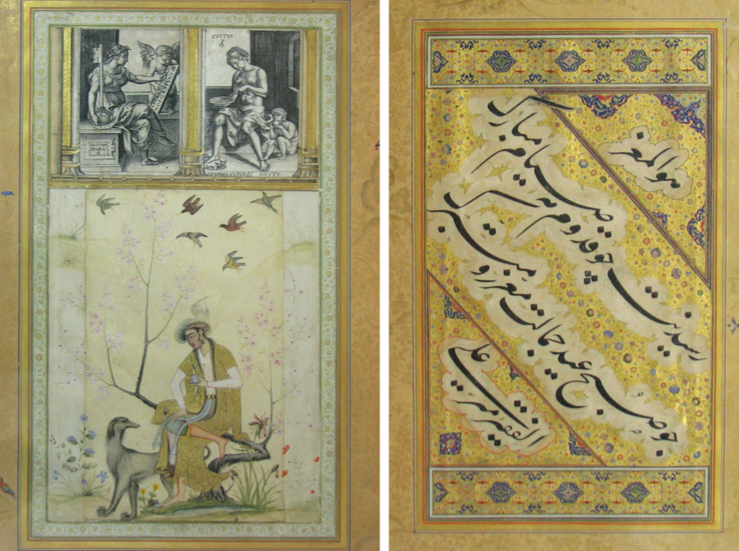 The Brush and the Burin

What is her methodology/approach?

The author firstly introduces the origin of albums folios. Then she showcases her studies on five single leaves from Jahangir period albums folios. In each single page, she looks into the arrangements of different terms of arts including calligraphy, engravings and paintings. By doing this, she finds that, being different from paintings, engravings and calligraphies used to be categorized together in that period. In the end, she does some researches on the previous studies and tries to find out the relationship between engravings and calligraphies. Moreover, she suggests the reason on why the two types of art was under the same category.

What is the connection between the arts of calligraphy and painting?

Because of the Mogul albums’ organizational format, allowing pages alternating between paintings and calligraphy, it is difficult to determine the context according to the precise pagination.

In Islamic arts, Arabic script is considered divine, compared to pictorial form. Rendering human and animal forms posed a challenge to the creative authority of God.[2] What’s more, most of paintings are sourcing from Europe. Hence, scholar believes, Mogul interests in the formal and technical aspects of art-making than about the development or evocation of a broader, overarching narrative.[3]

What is her evidence?

The author substantiates her points with information obtained about the historical context of the Mogul miniatures. One example would be the historical account of the Jesuits appearance in Mogul court (pg. 305), and what items they brought with them. She also provides a technical account of how the artwork was created (pg. 305), and compares the different styles of the Mogul miniatures against each other to further highlight any specific differences between them (page 307). She is also able to provide further insight into the miniatures by conducting a short visual analysis for certain pieces (pg. 307). Examples of European artwork from the Victoria and Albert museum are also given to enhance the reader’s perception of the type of artwork that was being exchanged (pg. 305). She also refers to articles published by other academics that allow her to further support her points, such as the study done in 1926 of the Jahangir album pages by Ernst Kuhnel and Hermann Goetz (pg. 308).

And, what are her sources?

The author uses a variety of textual sources that are derived mainly from books and journal articles, and mentions specific titles for reference for each one.