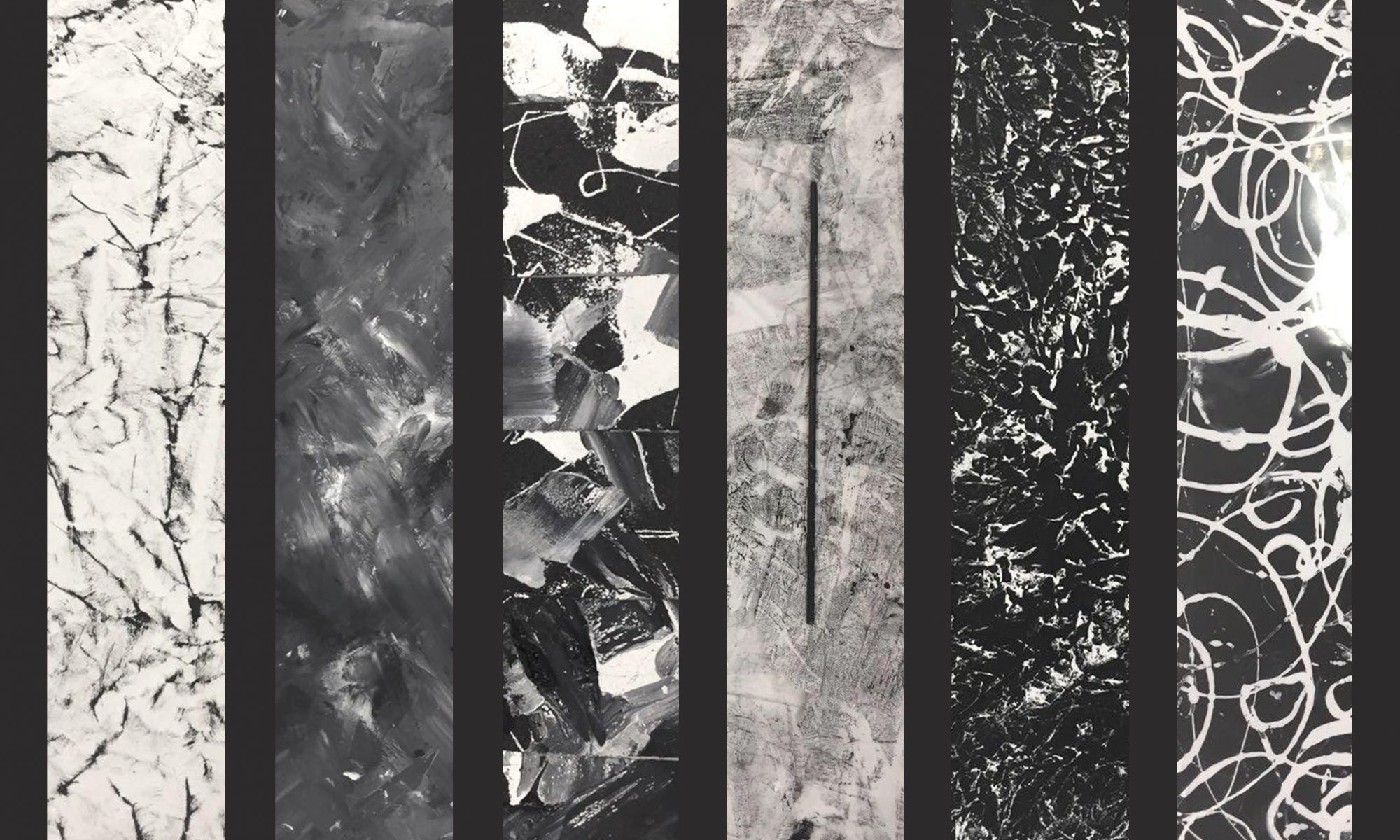 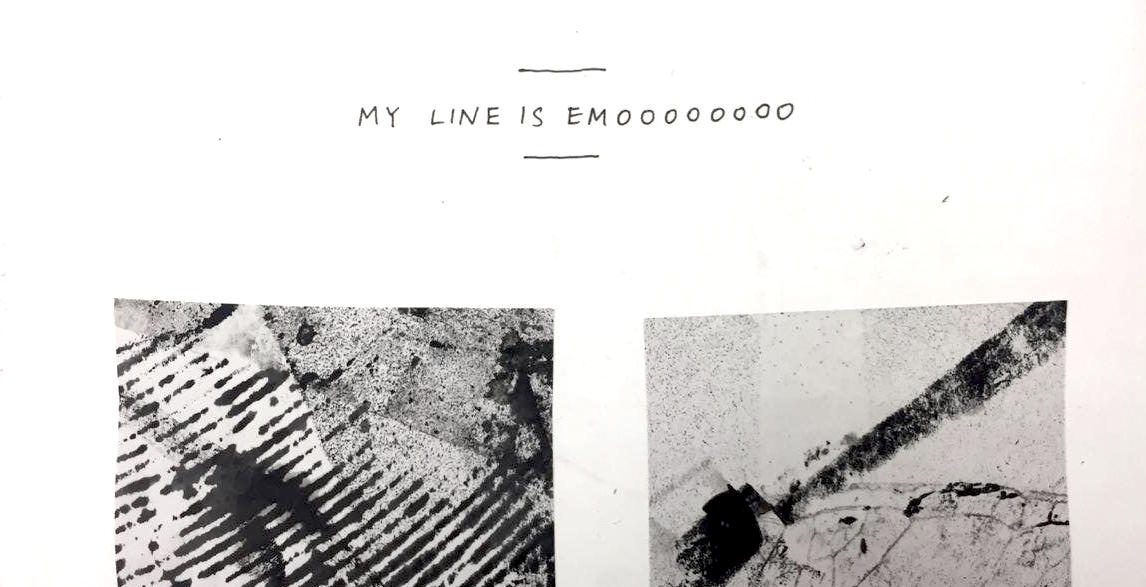 My Line is Emo has got to be one of the funnest assignments so far. I especially loved letting loose with ink, getting my clothes and body stained black and looking like a beggar for weeks.

The way I approached this assignment was inspired by Jackson Pollock. I got right into making through expression and searched for emotions within the textures and strokes later on, sort of like reverse engineering.

The first medium I experimented with was lino cut. I cut myself in the process. I didn’t use lino after that attempt. Picture proof of beggar hands with cut: 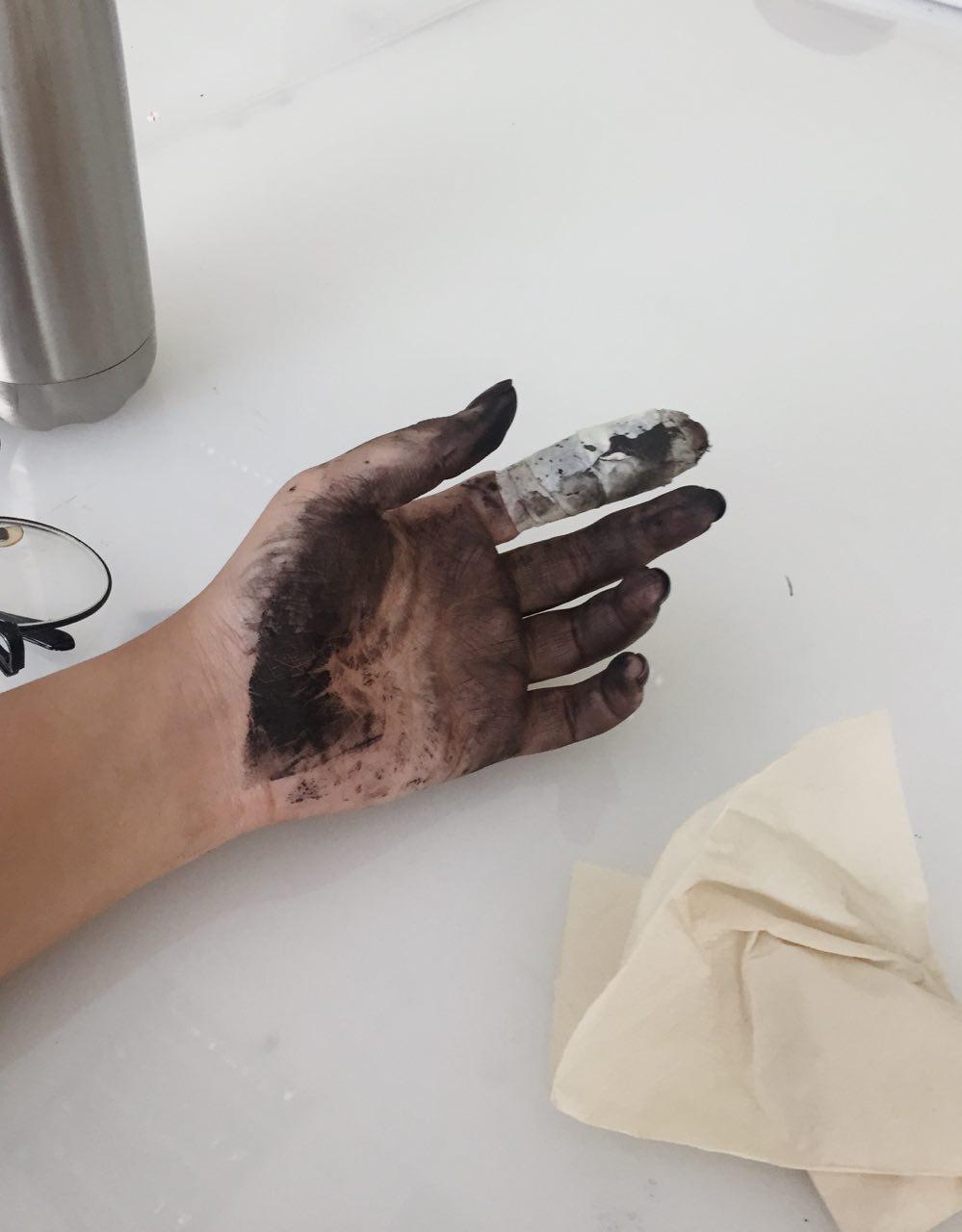 After the lino trauma, I moved on to experimenting with safer, softer but textured mediums like oranges and crackers, bread and sponges to create patterns. I also went a lil’ crazy and filled a spray with ink which resulted in the mess below. My failed lino piece can also be observed in the following picture. 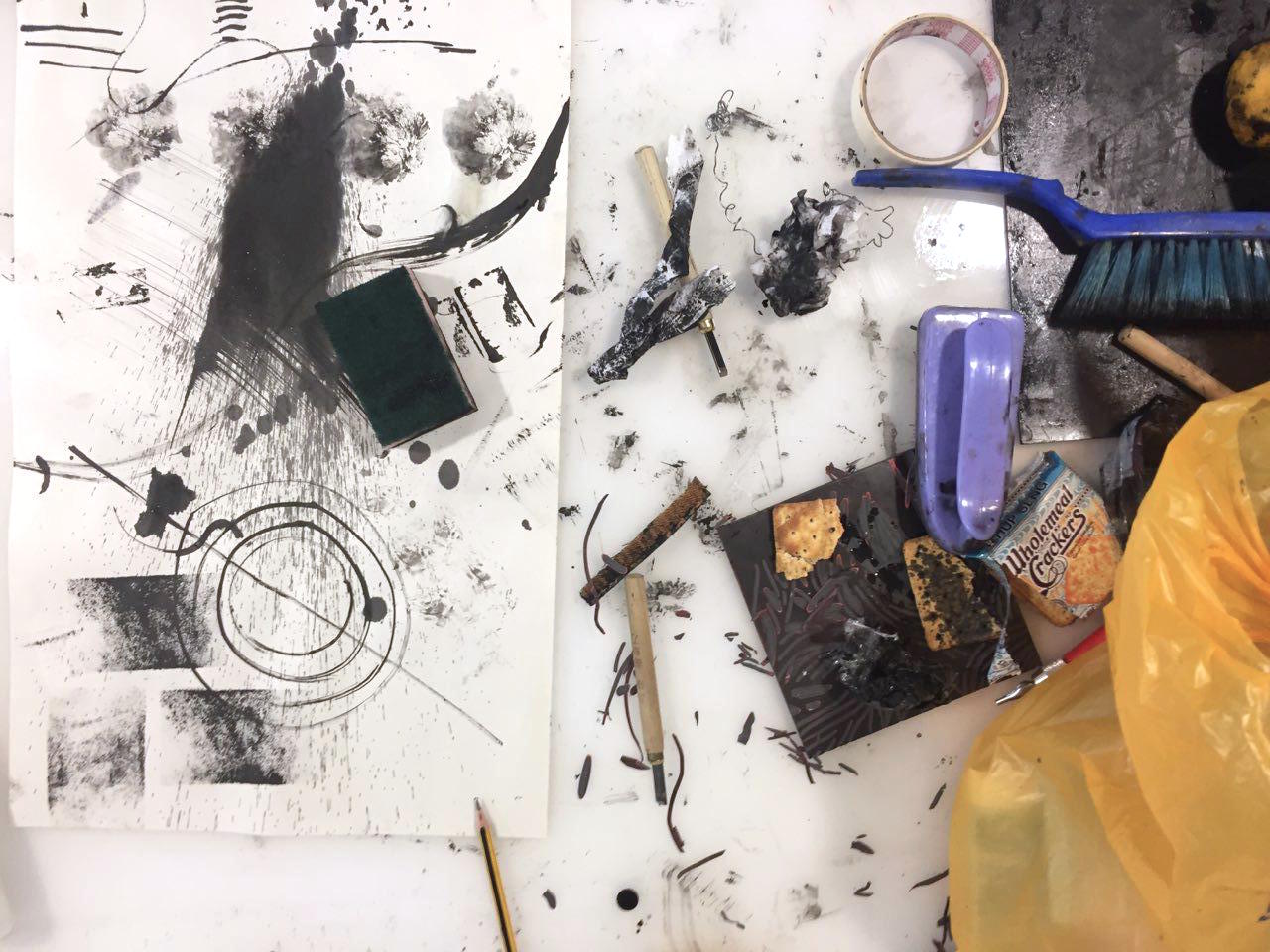 From playing with these foods, I found that the orange created coloured juice stains on the paper which didn’t tie in with the black and white requirement of the assignment. I scraped that idea. The biscuit crumbled all over the lino sheet when I rolled over it with ink so that didn’t go so well either. I resorted to a sponge dipped in ink and started experimenting from there.

Here are the other materials I played with: 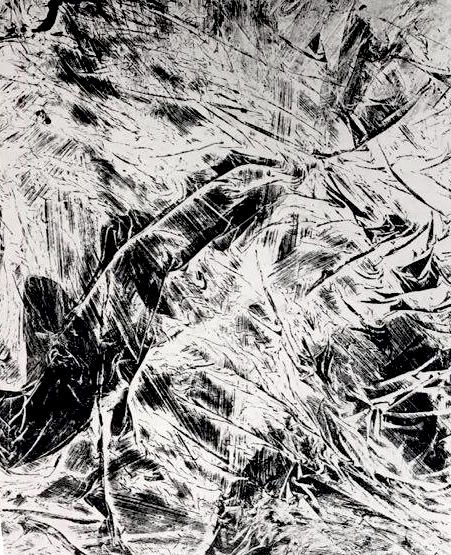 The cling wrap gave a really interesting texture that reminded me of suffocation or being repressed. 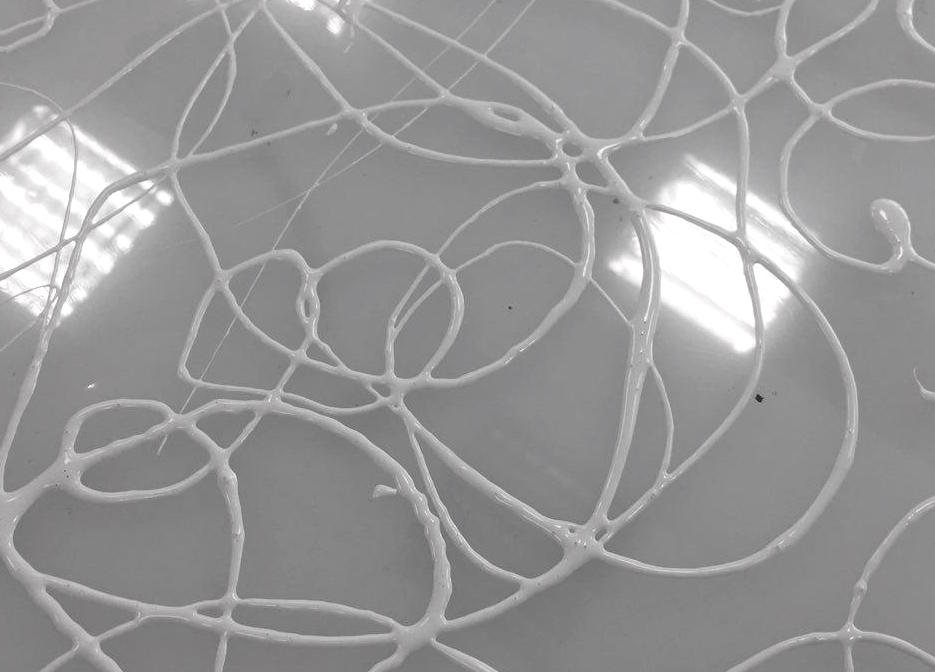 I loved how the see through material gave the emotion the dimension of vulnerability. 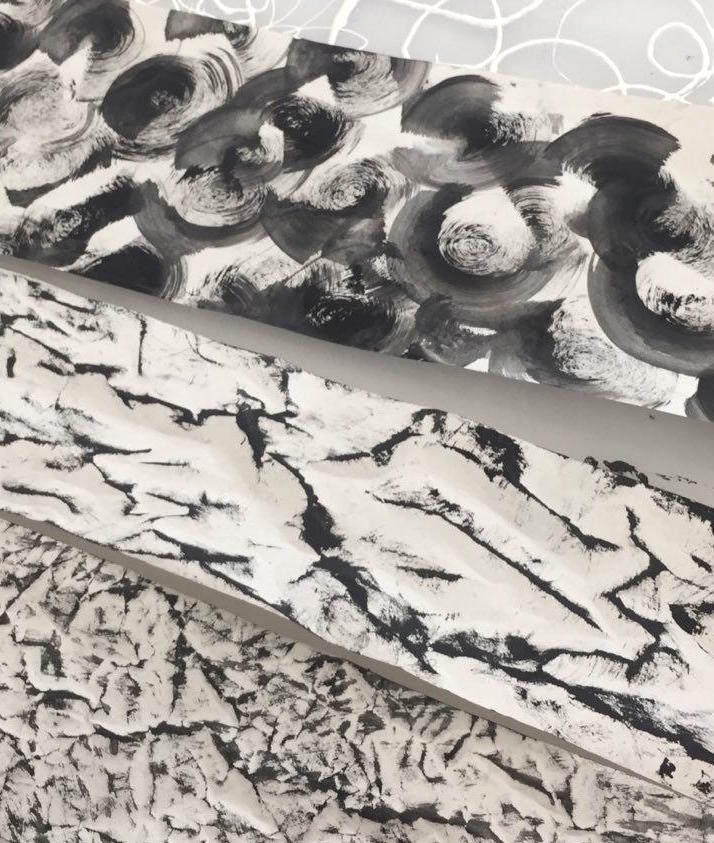 In the first strip, I ran a blackened sponge in circles to create dark churning movements that looked like worry. 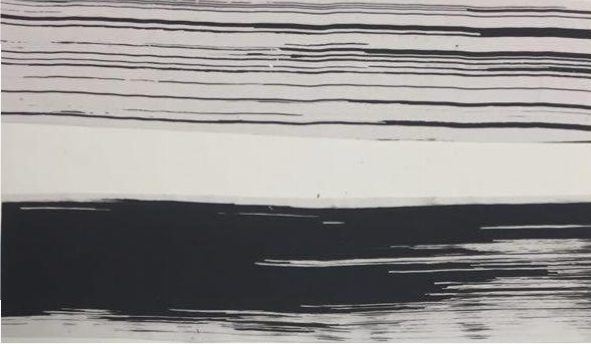 It was interesting to see how different intensities of the brush stroke created different tones of emotions. 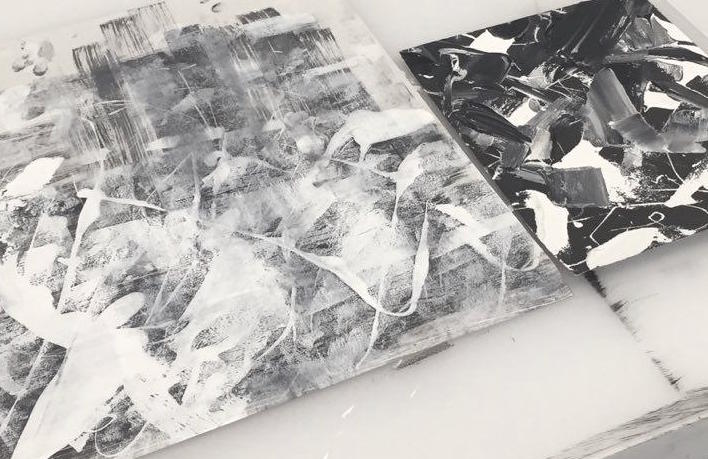 The piece on the left seems a lot like guilt to me. I painted over a greyish background with white smears of lines, imitating the feeling of trying to cover up something sinister or dark.

In the second week of the project, I was stuck because I couldn’t come up with a consistent theme or concept. Ms Mimi shared her thoughts on how I could carry on by referencing Jackson Pollock’s style. She told me she liked the variety of line textures I had created and how I could draw emotions and create a concept from observing these lines.

After creating several textures, I organised them into the emotions I felt they portrayed to me. My final boards are representative of the emotions produced by the heart and brain respectively. I’ve named the first board ‘HEART’ and the second ‘BRAIN’.

“HEART”  Emotions from the heart are strained and deeper. They build slowly and broil like chicken in a broth.

I scrunched up newsprint and brushed a dry black inked brush gently over the creases to create a cracked/marbled texture. Many of my classmates told me this looks serene or calm but I felt it captured the building up of anger, like how torment isn’t an instantaneous form of anger, it is slow building and boiling.

I smeared black and white paint with my fingers and a brush on a piece of newsprint to create the effect of a storm brewing. There are always bright parts in a storm but you can’t quite reach it yet and I think that represents the feeling of grief.

I smeared a palette knife with black and white paint on sandpaper for love. I wanted to imitate the movement of butterflies fluttering in one’s tummy, much like the feeling of being in love. I progressively added more white towards the right side to create the illusion of taking flight or reaching a safe place.

“BRAIN”  Emotions from the brain are reactions that are quick and instantaneous. They are pure and candid.

I drizzled white paint on plastic to give joy that translucent, innocent, candid feel. I didn’t want the paint drizzles to be perfect in thickness, no drips, no smears, because I realised that joy is like an ugly, loud, true blue laugh.

For surprise, I rolled over some tissue with a slightly inked roller and stuck it to a board to create a soft and restful base. I painted a satay stick over with stark black ink to create that bold, surprise element in a sea of soft background.

I got this paper while shopping and I thought it’d be fun to try white paint on it. The crumples were already there and all I had to do was brush a dry white inked brush over the folds to bring out the creased texture of the paper.

All in all, I truly had fun doing this assignment and I’m grateful I’m playing with ink and emotions instead of numbers on an excel sheet.