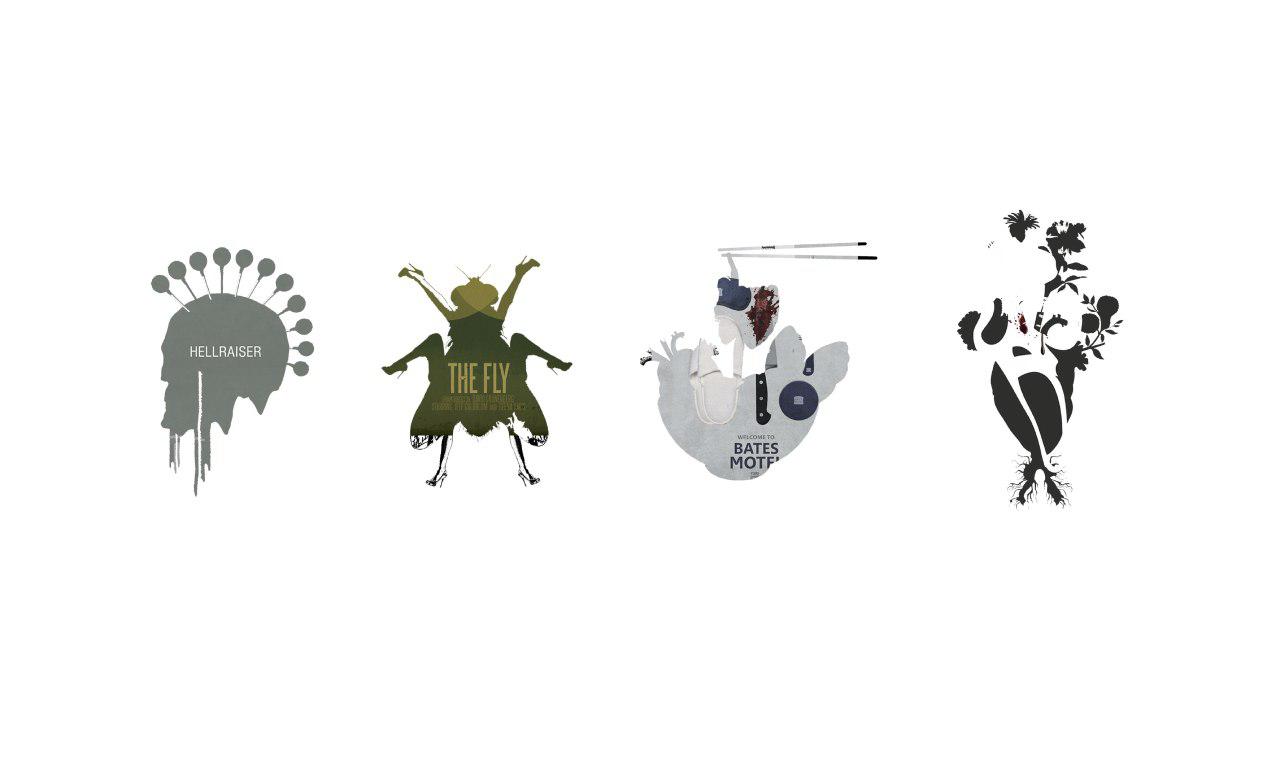 I’ve always enjoyed a good scare. Psychotic killers and grotesque, messed up story plots make horror one of my favourite film genres. A forewarning – all my quotes are from scary movies. I made a list of them and chose the four I could visualise best, bolded below.

Instead of visualising each quote in the usual gory way with bloody guts and ugly monsters, I wanted to to portray them in a pleasant sight that is satirical and ironic. The horror of the quote would be underlying and the composition would be surreal. Here are my final designs and how I developed them:

Thriller/Horror · A brilliant but eccentric scientist begins to transform into a giant man/fly hybrid after one of his experiments goes horribly wrong.

For this design, I wanted to give the fly human features instead of a human having insect features like it was in the movie because doing that would make it too literal.

At first, I used the fly’s natural legs and added men’s shoes to the fly. BAD decision. It looked ugly, out of place and the human characteristic was not there. I removed the fly legs and replaced it with a woman’s, wearing high heels. I also replaced the pattern on the fly’s wings with patterns from a floral skirt to add character and pleasantry to the otherwise gross and insecty fly vibe. I was surprised my classmates favoured this fly over the other designs because it is so strange & why would you guys like flies with human legs!! This is the final product. 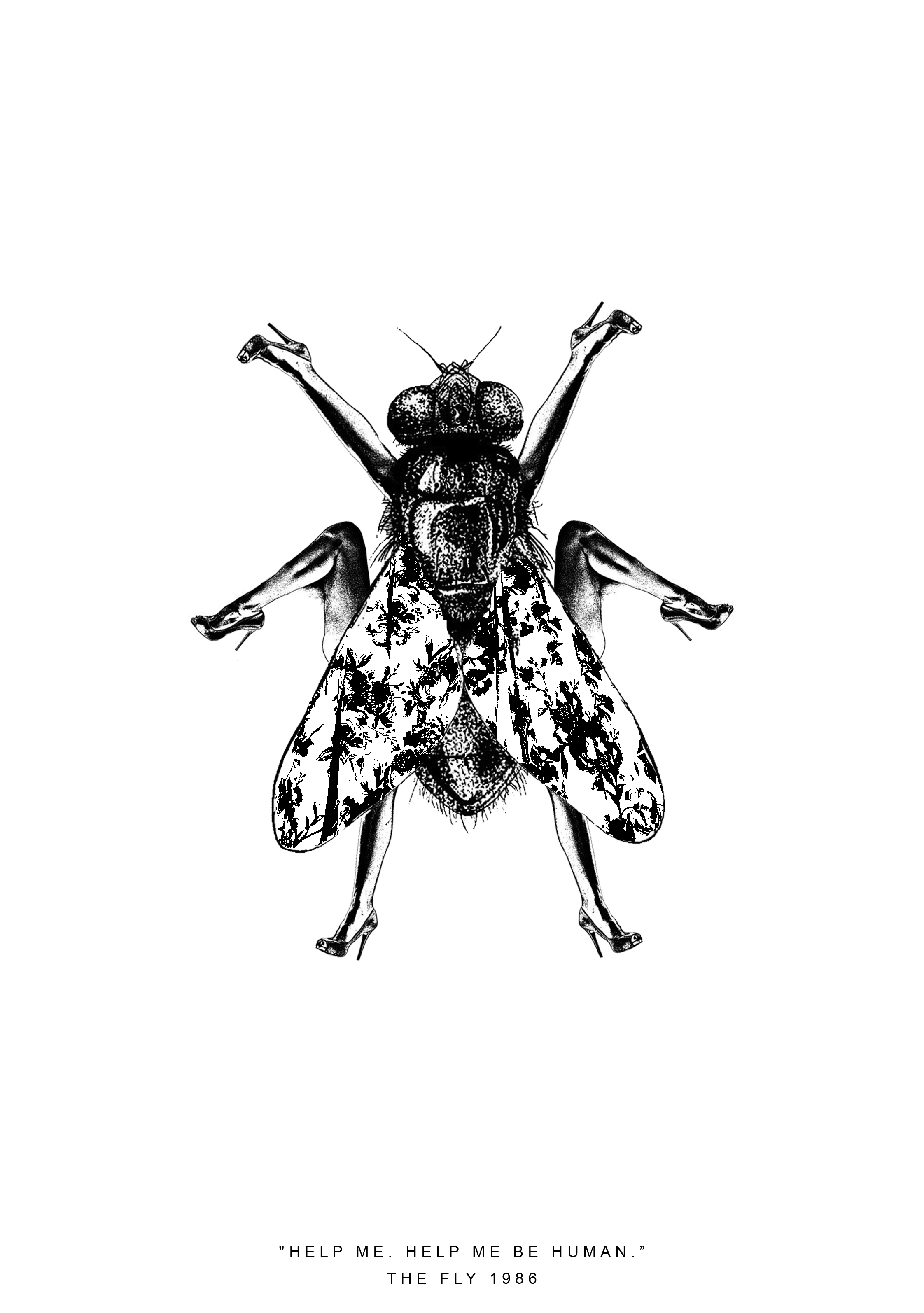 Horror/Thriller · A seemingly friendly farmer and his sister kidnap unsuspecting travelers and bury them alive, using them to create the “special meat” they are famous for – human sausages.

For this design, I was initially inspired by Julia Geiser, a collage artist who produces imaginative work out of both modern and vintage motifs. I was especially excited about her works that filled up the cross section of an image with something surreal.

Following that vein of thought, I used an image of a man’s torso, and created slices out of him that looked like ham or meat. I replaced his head with a roasted chicken with a fork stuck into it and added some drips of dark liquid to look like sauce. Since the movie is about cannibalism, the fork would show that the man is eating himself. I tried both halftone and threshold effects to see which style I preferred. 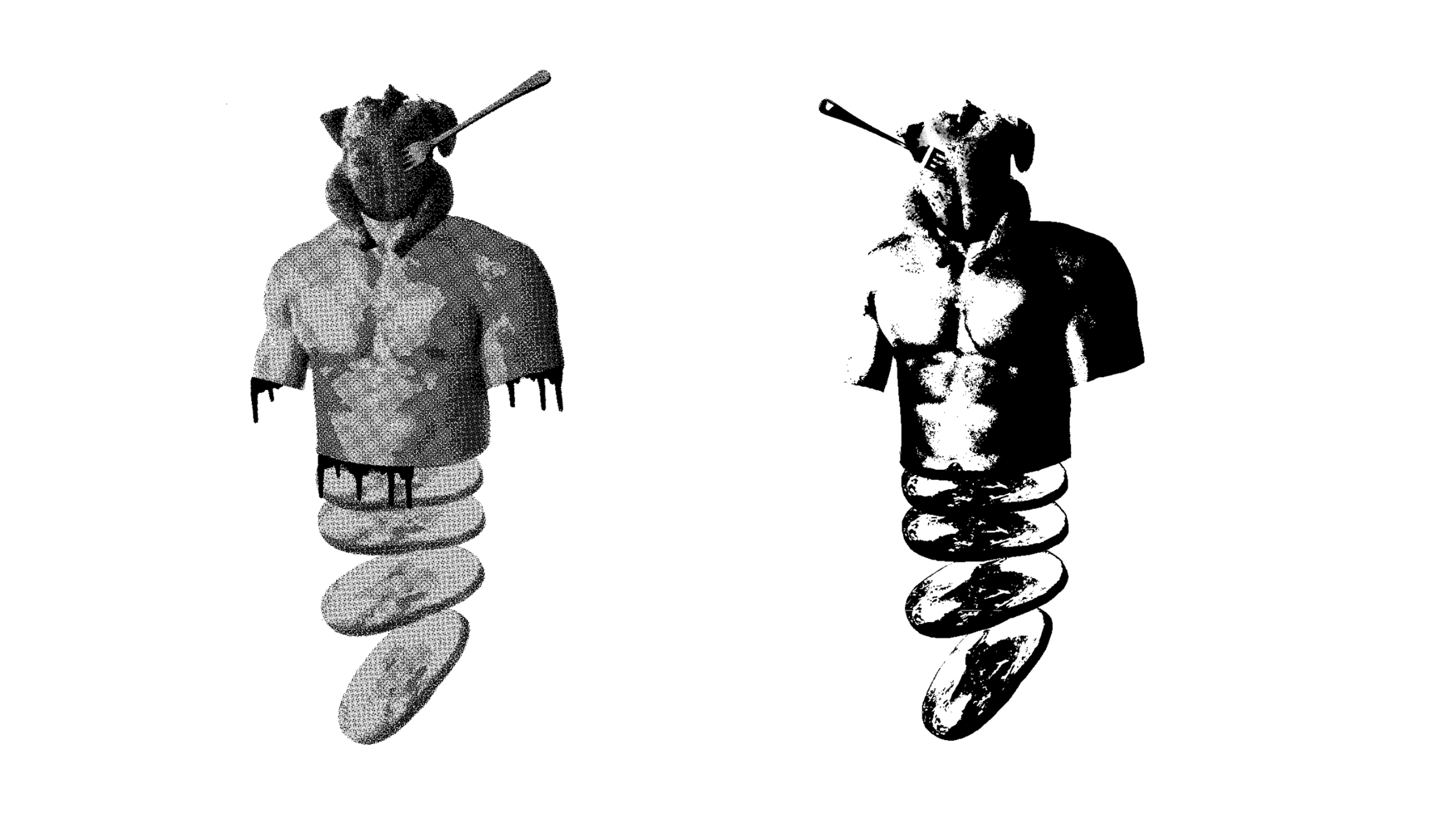 Turns out, I liked neither. The image i imagined was not reflecting on screen. The message wasn’t bold enough in the halftone and the details were lost in the threshold image. When I asked Mimi, she felt both weren’t strong either. I scraped the idea and thought along the lines of creating a wholesome meal made of organs. I first tried the typical western steak and peas meal but it was too hideous – even to show as process, so no pix for that. I then tried placing the organs into a ramen bowl. Here is a visual representation of my process.

In the beginning stages, I struggled to find the right images and elements to use. I tried using feet for the veg but it looked disgusting. I thresholded and half-toned the bowl and images but it still looked off. In my last attempt, I used line drawing images that made everything fit together seamlessly.  Brains for the noodles, lungs for the veg, eyeballs for the ramen eggs and heart and intestines for the meat. This is the final product. 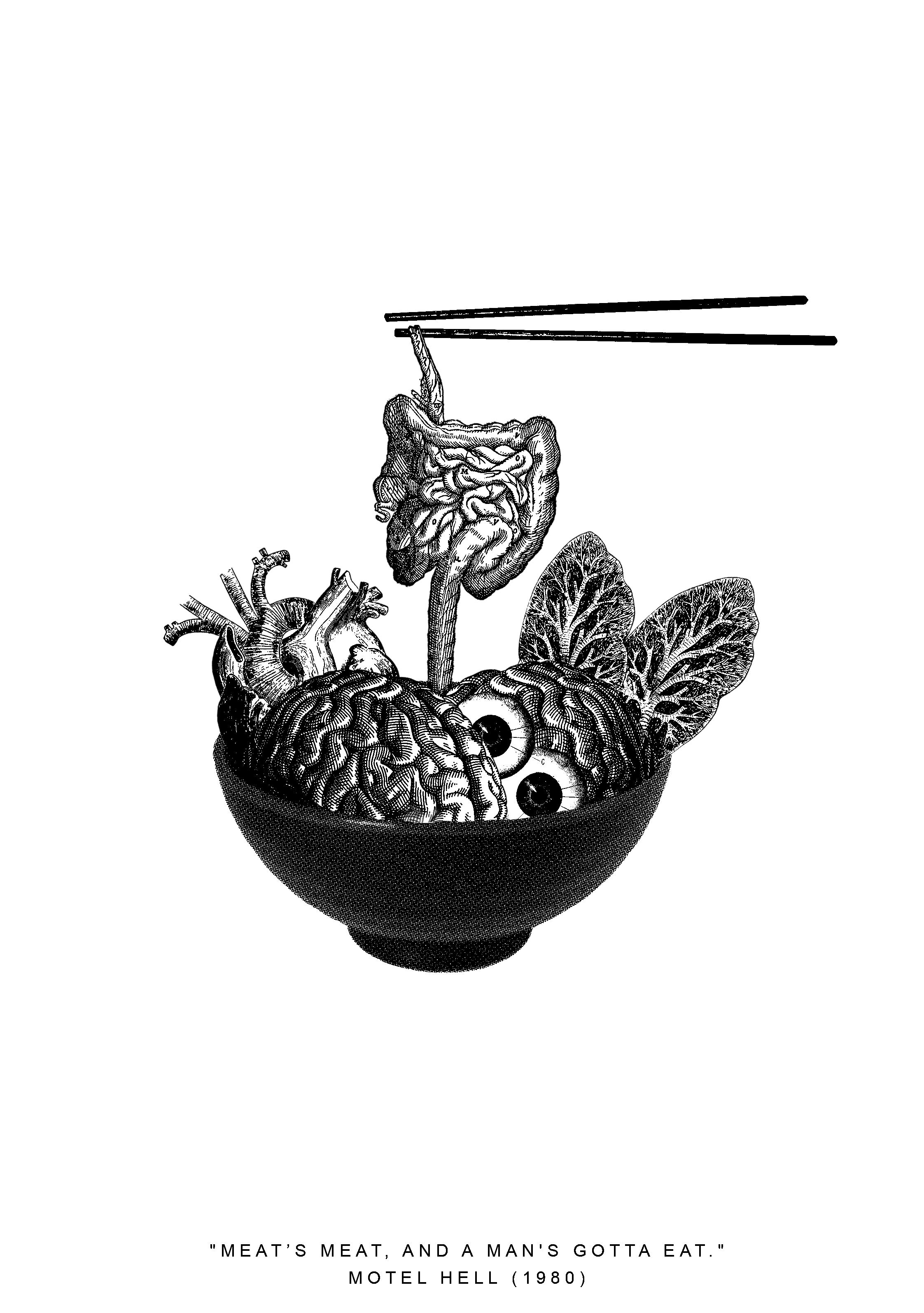 This is also the design I chose to silkscreen. I wanted to use this design because ramen is a universally known food and being put on a tote bag, it would surely be a conversation starter.

The initial coating, exposing and washing was pretty easy. I may have spilled the blue goo everywhere, and got a shock from the black suction machine, and nearly froze to death in the spraying room, but it was a good experience. Then came the printing, the hardest part. Thank goodness Yolanda the expert at silkscreening guided me through the process and gave me her special concoction of acrylic + unknown printing ink. 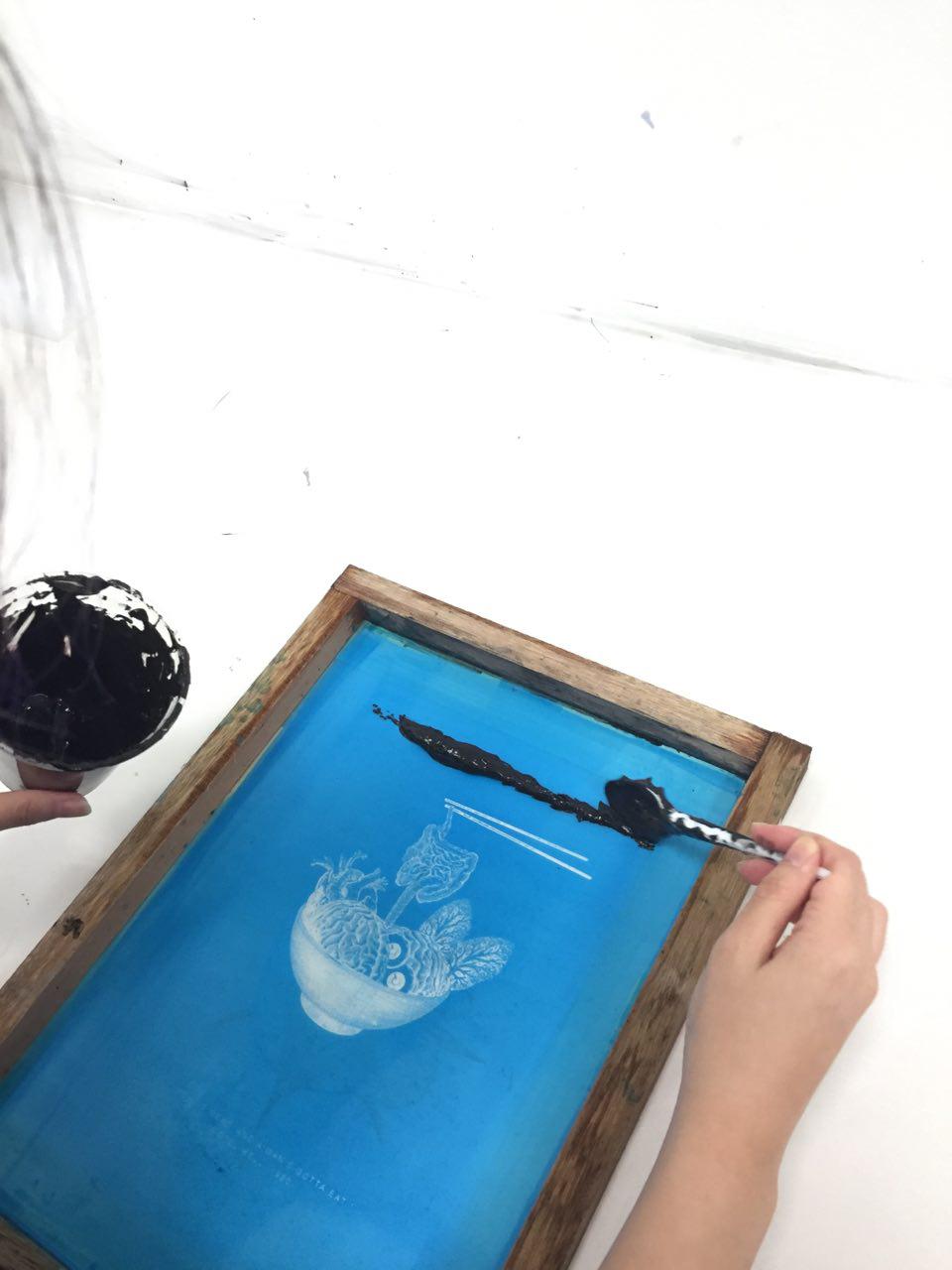 This is how it turned out, hanging in my messy room. If the tote bag was bigger and sturdier I’d definitely use it everyday. 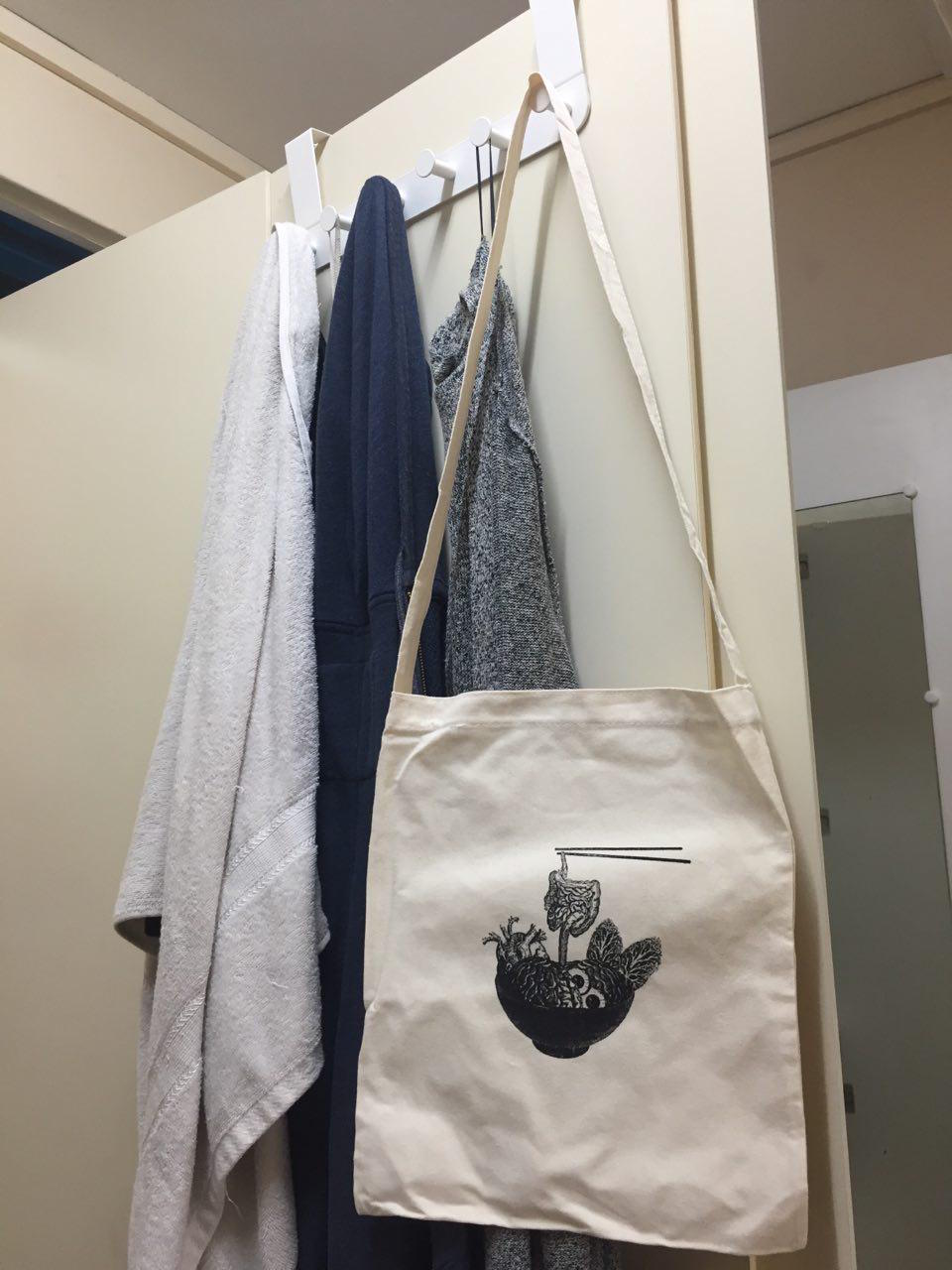 The detailing wasn’t as fine as I expected it to be, but the nature of my design made it hard to get an even coating while being fine. This was the best of my many attempts so it had to do. 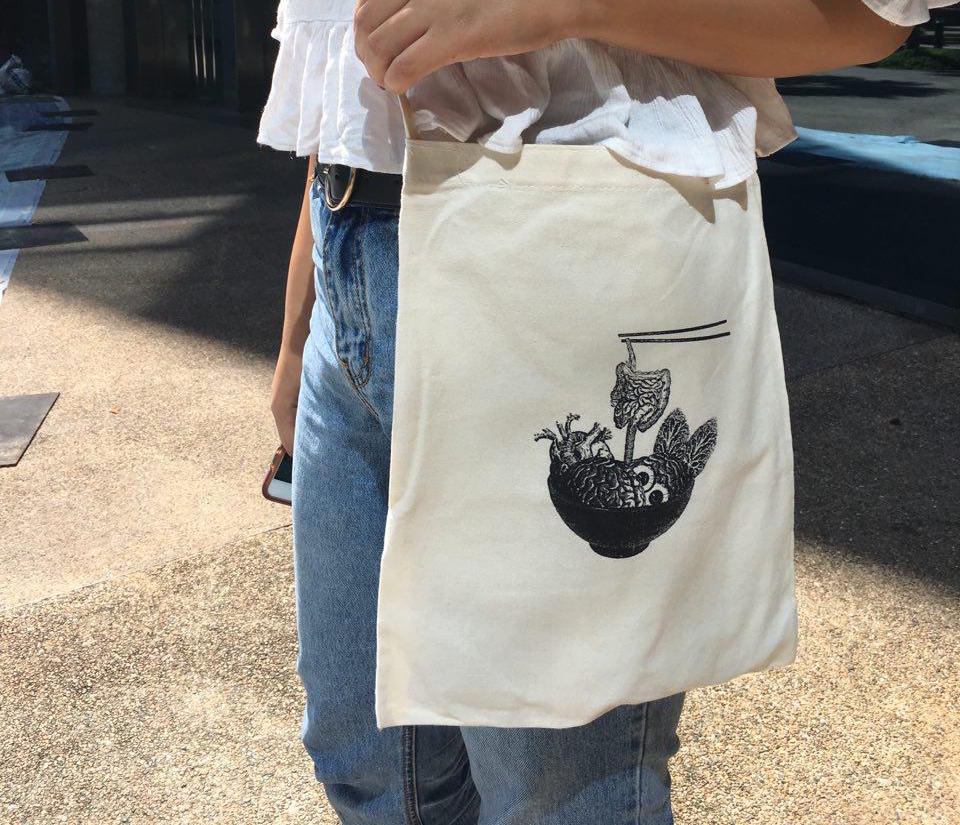 This is me with my tote. (Product picture by AJ) I hope it isn’t Cotton On standard.

Horror · A year after the murder of her mother, a teenage girl is terrorised by a new killer, who targets the girl and her friends by using horror films as part of a deadly game.

For this design, I started with a superficial aesthetic image of a goldfish with the sky within it. I wanted to represent the goldfish as someone that is trapped, like the victim in the film, longing to be free. Later on, I tried forming train tracks that lead into an eyeball. Looked messy and didn’t work. Then I used a girl and carved out the space where her tummy should be. Clearly, all of them turned out quite horrible.

I thought deeper about this quote. I decided to show the romantic side of the film, how the killer is actually someone in love. So when the killer says he wants “to see what your insides look like”, he is subconsciously hoping that the girl’s heart is longing for him.

He imagines flowers growing with affection as the sight he will see when he slices her open and that is why I created the heart blooming with plants instead of the bloody insides of the victim. Above is my process of how I added different flowers to fit the shape of the heart valve and below is the final product. 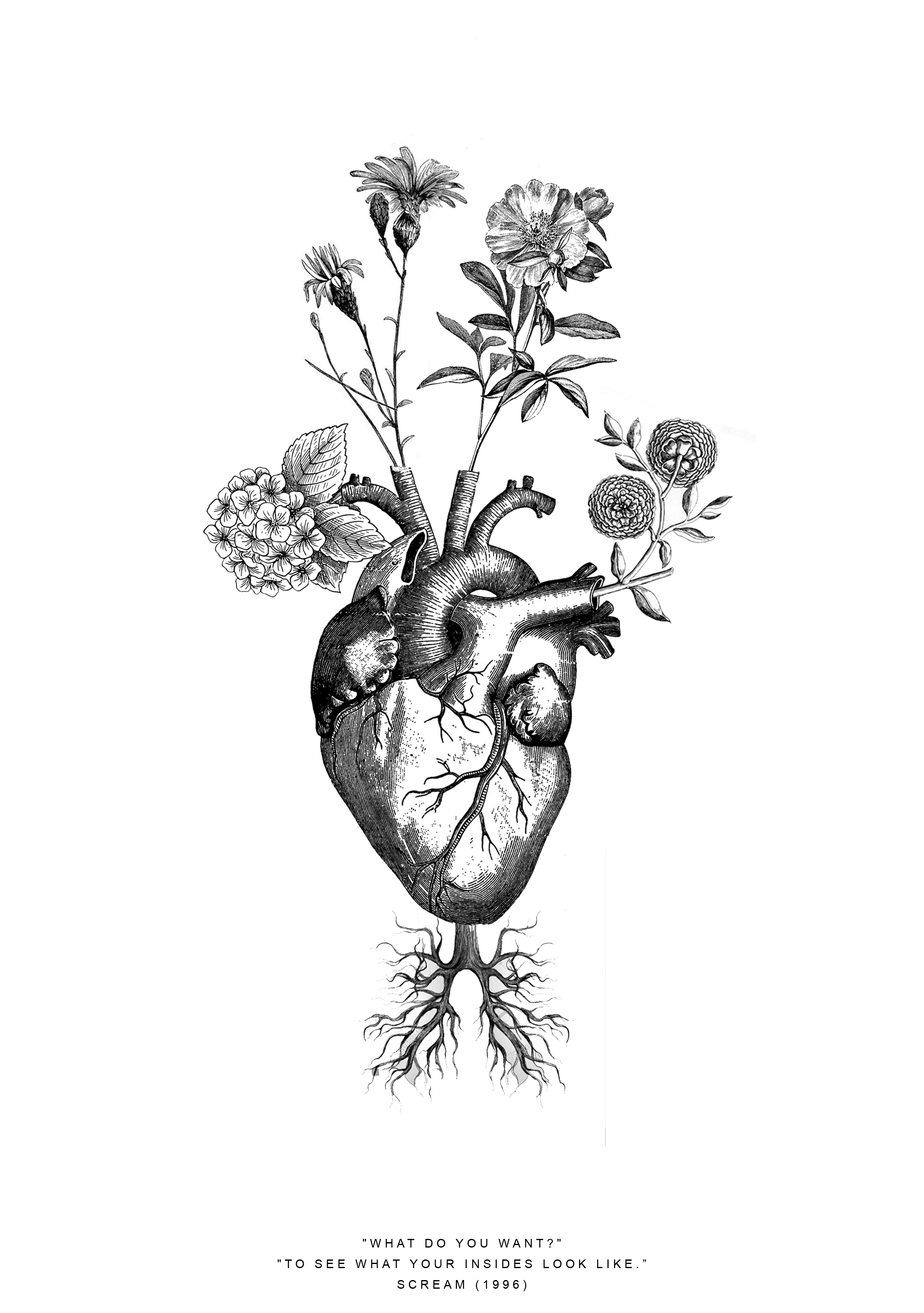 Horror · An unfaithful wife encounters the zombie of her dead lover; demons are pursuing him after he escaped their sadomasochistic underworld.

This quote holds a warped and messed up take on pain. The main character is a guy called pinhead and he is a sadomasochist. He seems to enjoy and revel in the fact he has nails stuck into different parts of his head.

I wanted to substitute the pins for something more pleasant and the first thing I thought of was the pin cushion replacing the human head to show how nonchalant pinhead is when it comes to pain, just like a pin cushion who doesn’t feel and whose sole purpose is to be pierced by needles, as seen above, but I scraped the idea. 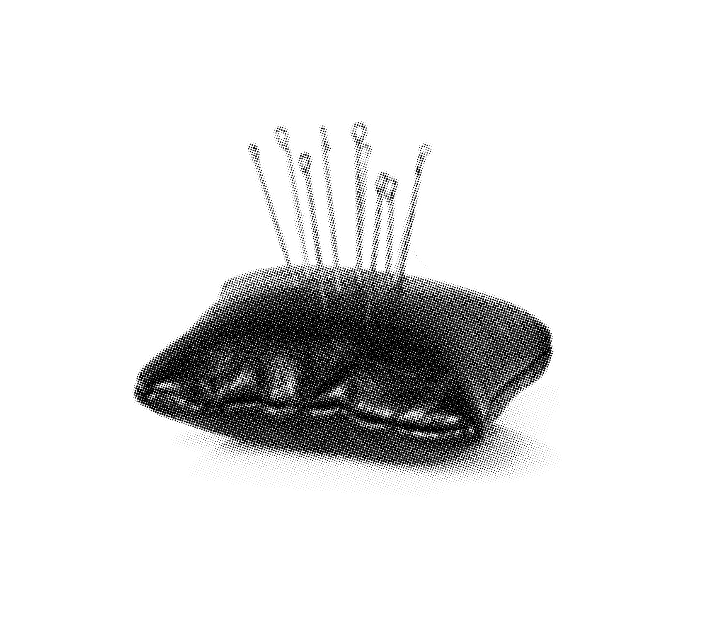 Next, I tried using a human skull pierced with all sorts of candy. The pain in this case would be a toothache but the consumer still can’t get enough of that sugar and they’ll keep injecting more into their system, which represents sadomasochism in a way like an addiction.

In the first image, I tried arranging the lollipops the way pinhead usually has his but it looked weird so I turned it into a mohawk instead. I also used sour strips for the tears to show sourness and channel that melancholic vibe even with sweetness all injected into this dead skull head. I added sprinkles into the hollows of the eyes to show how clouded and delusional pinhead’s world view is. Lastly, I melted the skull so it looked like dripping honey. 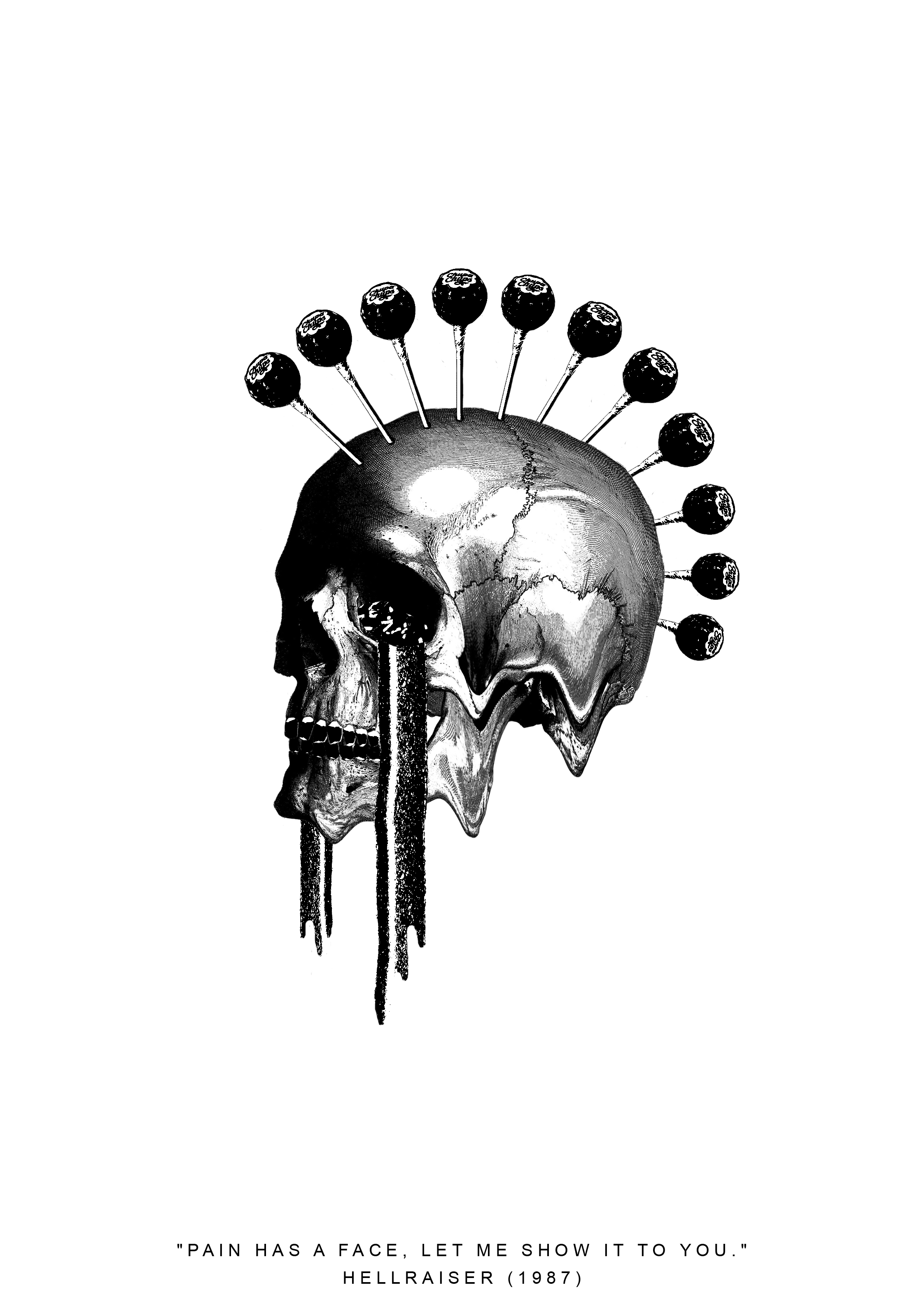 Overall, I really enjoyed this project and how the possibilities of each creation were endless. I never wanted to stop, even when I had an art history essay to submit. I realised I’d rather make 50 more tote bag designs instead of writing an essay. I didn’t mind making a few hundred drafts that wouldn’t be used because the process of making and scraping pushed me to make a better composition than I had envisioned in the beginning of each artwork.