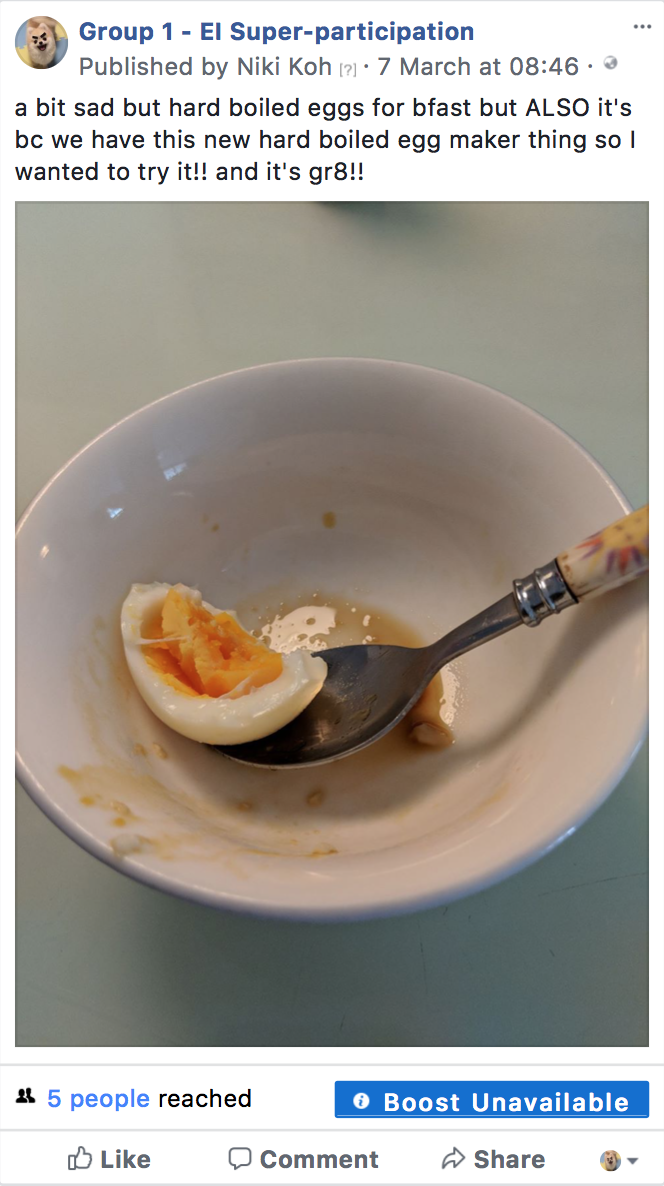 In this micro project, we (Kai, Samantha, Bryan, Niki & me) kept a five person Facebook group updated on our lives for 24 hours. There were only two rules to the posts; our 24 hours began at 8am on a Wednesday and we agreed to update every time something changes. What we ended up with is an almost intimate yet casual documentation of a day in the life of five individuals.

The things we shared in the group were intuitive and straightforward, whether we were waking up, heading out, being late or sleeping in. Something new happens, we update. Sometimes we shared how we were feeling, even if were just to say, “I’m sleepy” or “this egg tastes gr8”.

Throughout the day, I realised we posted more frequently, like we were getting into a familiar motion. I soon felt it was second nature to pick up my phone before doing any small thing and say, “wait I need to take a picture/video for my Facebook page!!!”. In a span of 18 hours, I used a full bar of battery three times over, made possible by the portable chargers of my accommodating friends.

It was an intimate experience in the sense that the five of us knew exactly where each individual was and what they were doing (given that we were all completely honest). Because the target audience of our posts were each other, we felt more inclined to comment and interact in the group. The level of interaction and information exchanged was high compared to real life where we hardly speak or text. What added on to this interaction was the crossover when Bryan and I met in the morning and when Kai and I met in the evening. 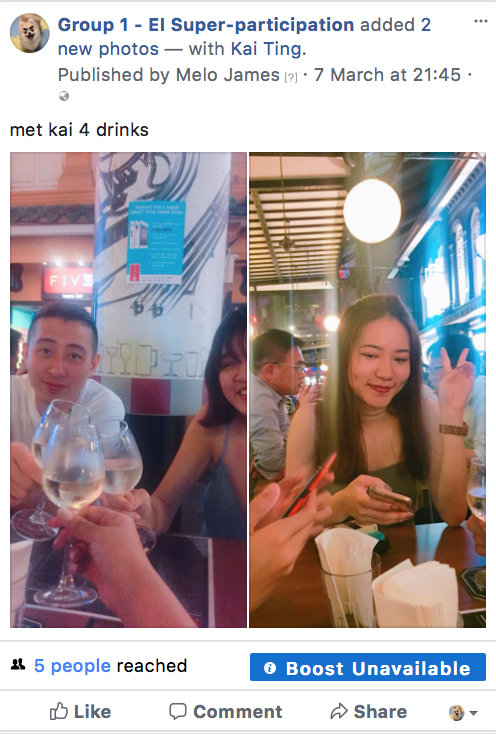 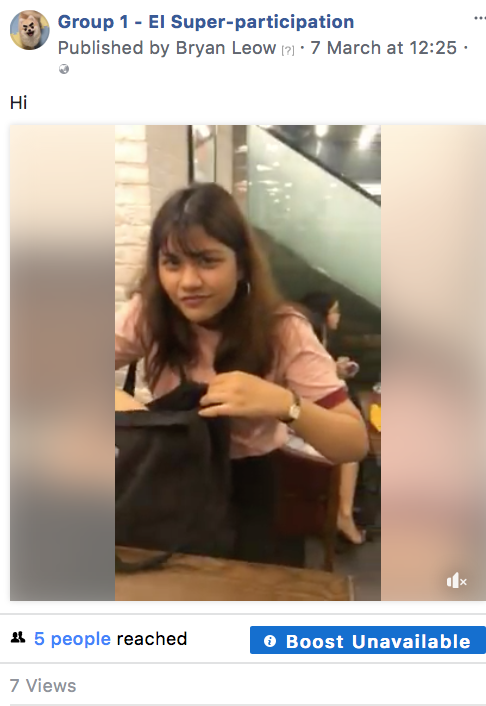 Kai was the realest in the group. She woke up hours after everyone with lots of scheduled posts to remind us she is still in dreamland. The pictures she uploaded were completely unedited and even out of focus. Take for example the ice cream posts from the exact same moment. I took a boomerang (twice) and she took a slanted picture with everyone’s ice cream in motion blur. Our personas are different in the way that I like to portray a more curated version of my life while she just wants to get the point across that she’s having ice cream and she doesn’t care if the audience enjoys her image or not. Then again, maybe she does care, just not for this assignment or this day. 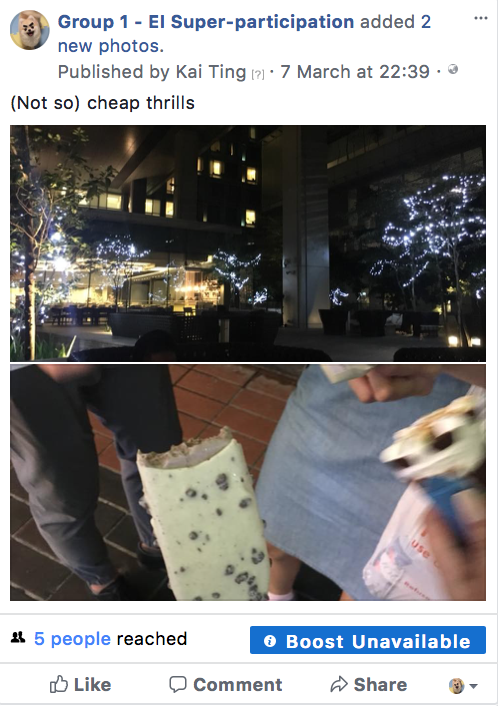 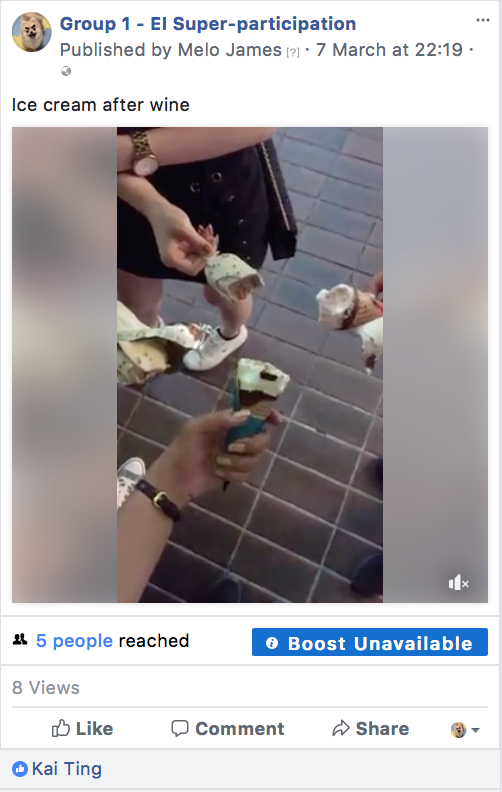 Bryan was the responsible workaholic. When I woke up and checked the group chat, he already posted about getting a head start on his assignment. In the afternoon, he met me to do more work and later in the day he posted about freelance work. It showed his focus and how he got very practical things done in one day. 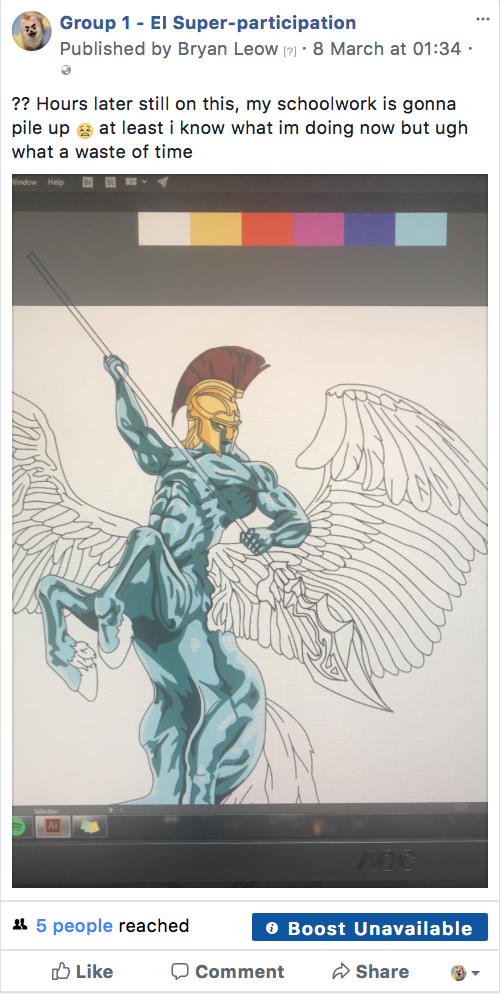 Samantha was the free spirit. Her posts were generally positive even though bad things were happening. She was comfortable with sharing her thoughts and activities freely, like her getting breakfast even though she was late and videos of herself acting and getting water poured over her. 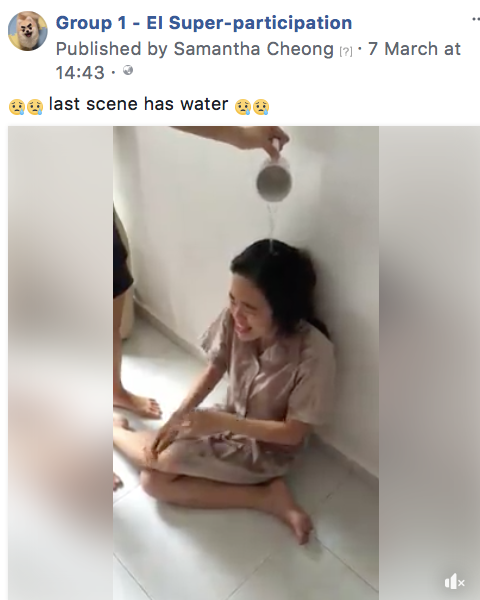 Niki was the clown. Her posts always included an amusing emoji of sorts and surrounded her getting into sad but funny situations which led to a lot of us leaving comments on her post with encouraging words.

I guess whether we intended to or not, each of us portrayed a digital identity in the group. Analysing each others’ personas from 24 hours of digital interaction may not be accurate, but  perceptions were definitely formed. Since my Wednesday was extremely packed with activities, I met with 4 different groups of people that day with many tasks to fulfil. At the end of 24 hours, my group mates concluded that my life is very “happening” without taking into consideration the day after that – a boring day when I would probably have nothing much to post but a few pictures of my cat and the pink sky. Nonetheless, there is accuracy in the sense that my days can get really busy. Take for example Artist Amalia Ulman who fooled thousands into believing that her as the persona she created was real, purely from her Instagram posts. This shows how easily people form perceptions from personas we create online. 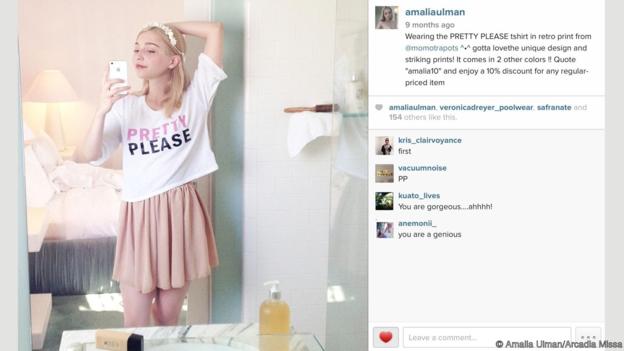 This digital medium may allow people, especially shy ones, to be more comfortable in sharing their thoughts since they don’t have to physically say it out and they are able to edit and curate their words. On the other hand, it still doesn’t allow some people to express their thoughts if they are generally closed up and private people.