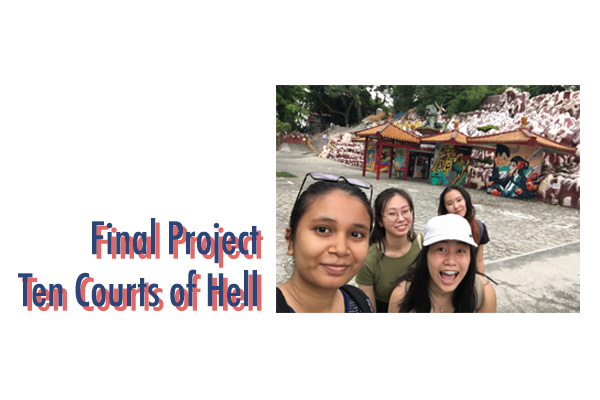 Final Project
Our final project was a board game called “Ten Courts of Hell”. Two players make up a team. One player will be in ADM playing the game on a physical board game. The other player will be in Haw Par Villa as the pawn. The two has to work together and communicate via Instagram Live. As they move along the board game, they will encounter at least 10 stations and each 10 stations will challenge the pair to work together to get through it. The ultimate goal is to reach the last station before the other team to win.

Research
Our ideas went through a drastic change. Initially we wanted to create a performance based on ghost and participant’s reactions. The participant’s interactions with the surroundings will influence how the ghost will act. However, we realized it is difficult to pursue this idea for three main reasons. First, a suitable location. Not only was it not site specific but it is also difficult to find a place where we could set up our performance without having to go through long processes of getting permission. Second, the idea was a bit complicated. It was hard for people to understand the idea when we explained it to them. This made us worried that there will confusion when we actually execute the idea. Lastly, we were not sure how to incorporate 3rd space.

After some consideration and getting inspired by the project “Can You See Me Now (2001)”, we decided to change our idea to a board game in Haw Par Villa. “Can You See Me Now” is a chasing game between the players online and players in the streets. We got the inspiration for 3rd space from here.

For research, the whole team visited Haw Par Villa in person. We learnt about the ten courts of hell and noted the punishments each courts give out. As we walked through Haw Par Villa, we found locations that resembled the punishment of each court and came up with ideas for games. For instance, one of punishments for the 2nd court is being drowned in a lava pit. We found a red arena in Haw Par Villa and decided to make our players play the “Floor is Lava” game. 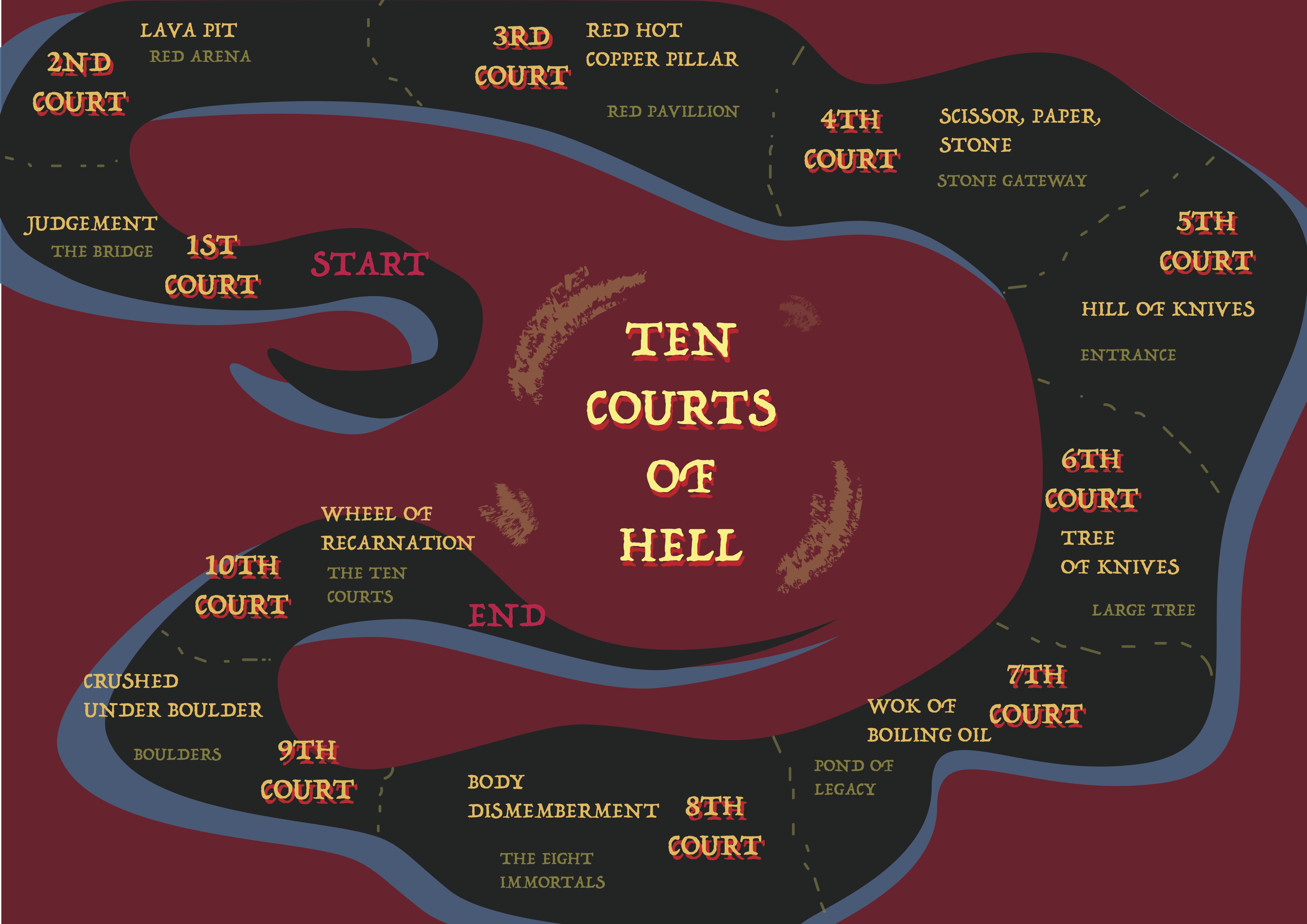 Above is the board game we created our game. Since this was a game that did not exist anywhere else, we had to personalize many of things. In addition to the board game, we created the dice. The dice only had the numbers 1 and 2 because there are only 10 stages in the game and we did not want the players to finish the game too soon. 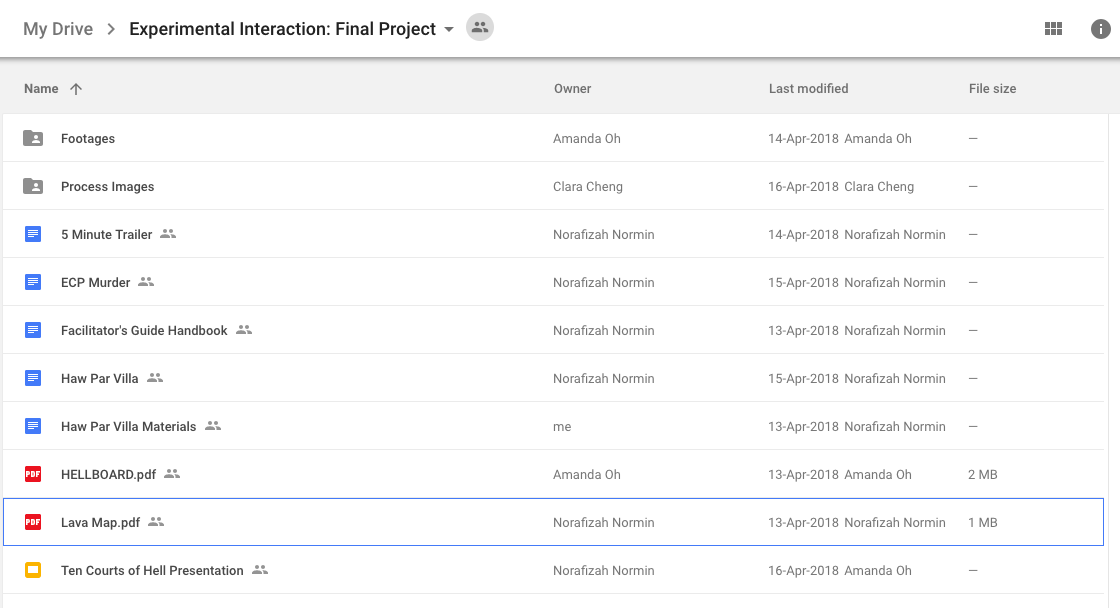 The screenshot above is all the work we put into the final project. To highlight some of them, the “Facilitator’s Guide Handbook” is a PDF handbook we have made for our group mates, in other words the facilitators. This is to make sure we had a handbook we can always refer to when we forgot the instructions for the games or the location we have to move to. In addition, by giving the same instructions to the players we were able to ensure fairness. Another document is “Haw Par Villa Materials”. Some of the games included was balancing a pingpong ball on a spoon while going down a slope in a limited amount of time, going through a box of goo to find marbles, and so on. Each station had a different game and this meant that a different set of materials were required for each station. So in this document we created a checklist where we could make sure we have prepared all the things we needed.

To document the actual occurrence of the game, we had three people working as the camera crew for us. Two was recording each of the Haw Par Villa players while one was in charge of recording both the ADM players. The process could be also be viewed on Instagram Live.

I feel like the biggest challenge for our team was coming up with an idea that was not too complicated. Because we had a bit of an extensive idea at first which was great but maybe bit difficult to achieve, we had trouble coming up with an alternative to that. But in the end, I love the idea we came up with it and it went really well.

Another challenge was the actual preparation for the “Ten Courts of Hell” game. There was a lot to prepare. Ten different games placed in ten different locations that is related to each court of hell. The materials and rules had to be settled as well.

Testing out each game really helped us polish up the game and be ready for any confusions during the actual execution. Sometimes we would also realize we need to change the rules so we can incorporate both the ADM player and Haw Par Villa player.

Overall regardless of all the hours and work we had to put in, I am proud of our team and work. It almost felt like a mini Freshman Orientation Camp (FOC). Which is funny because all the members of our group are part of the Programmers for camp next year. I feel like the incorporation of Third Space worked well because the ADM players and Haw Par Villa Players did not have much trouble interacting with each other via Instagram Live. In addition, we were able to have feedback and input from live streaming audience on Instagram. For example at one point, there was a viewer who was telling us it is going to rain soon. However, there is one thing I feel like I could have done better as an facilitator. While going over the videos taken to create the trailer, I realized I was too excited and into the game. I could have been more neutral and partial. For instance, when the opponent team was having technical trouble with their camera, I should have perhaps paused the game to give them more time to deal with it.