by Muhammad Shaherfi Hadi on November 23, 2019 in Final Project, Process

. One of the most crippling things in the modern age right now is loneliness. Despite being more interconnected than ever before, the world is lonelier than ever before.There two solutions to loneliness, while then first is being tackled by my project in interactive spaces the second I am tackling here. The second solution is to make people feel less alone. 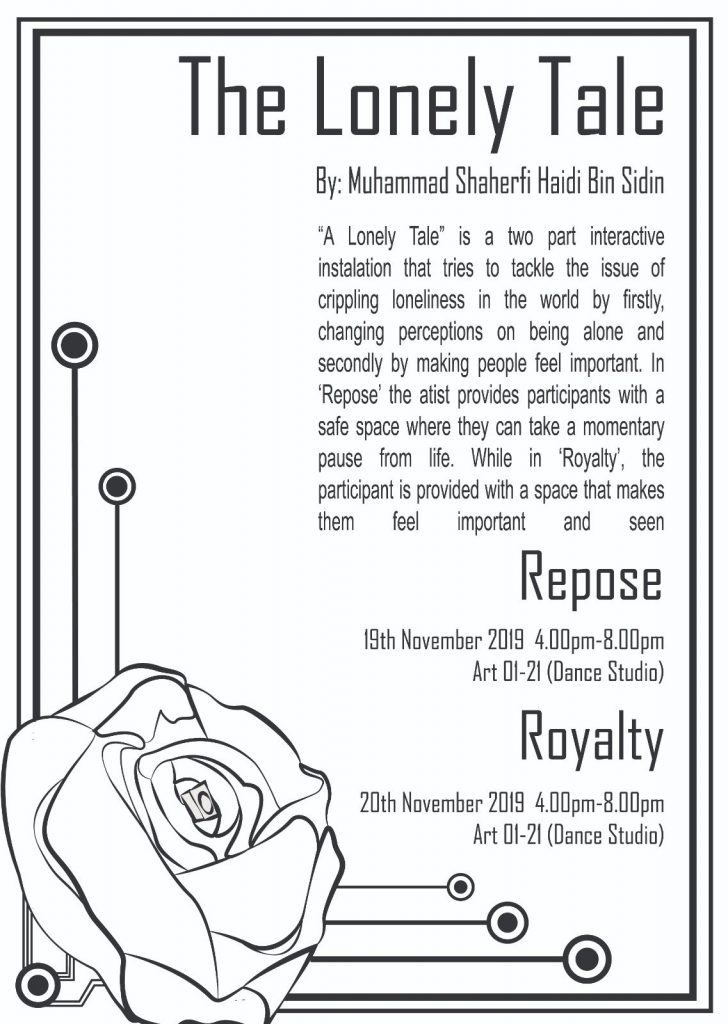 What I Set out to Do

So to do this I wanted to create a room/environment that reacts to the actions of the participant. So using the cloth room I created from interactive spaces, I decided to add a lot of LED lights.

Secondly I knew I also wanted to add a tarot card reading segment as I felt that things like tarot cards and horoscopes always makes one feel like the universe is listening to you. 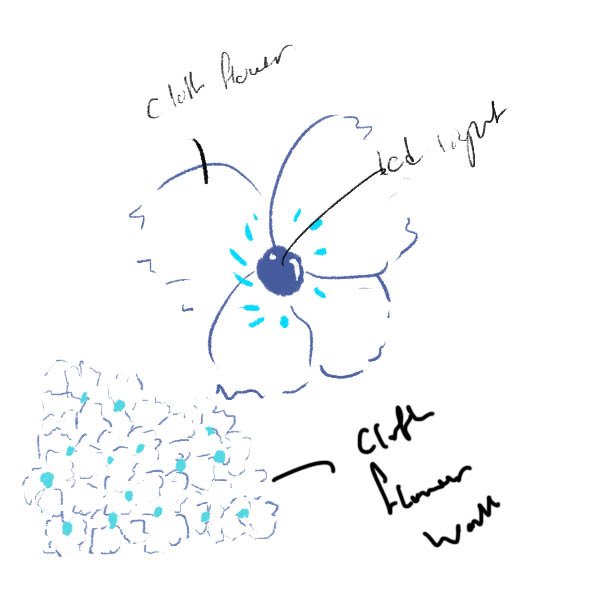 The first step was to prepare the strips of cloth. Initially, I cut each 60″ strip one by one by measuring each strip and then cutting it. However, I realised that this was not efficient and decided to prep the cloth more before cutting.

2. Measure out the strips 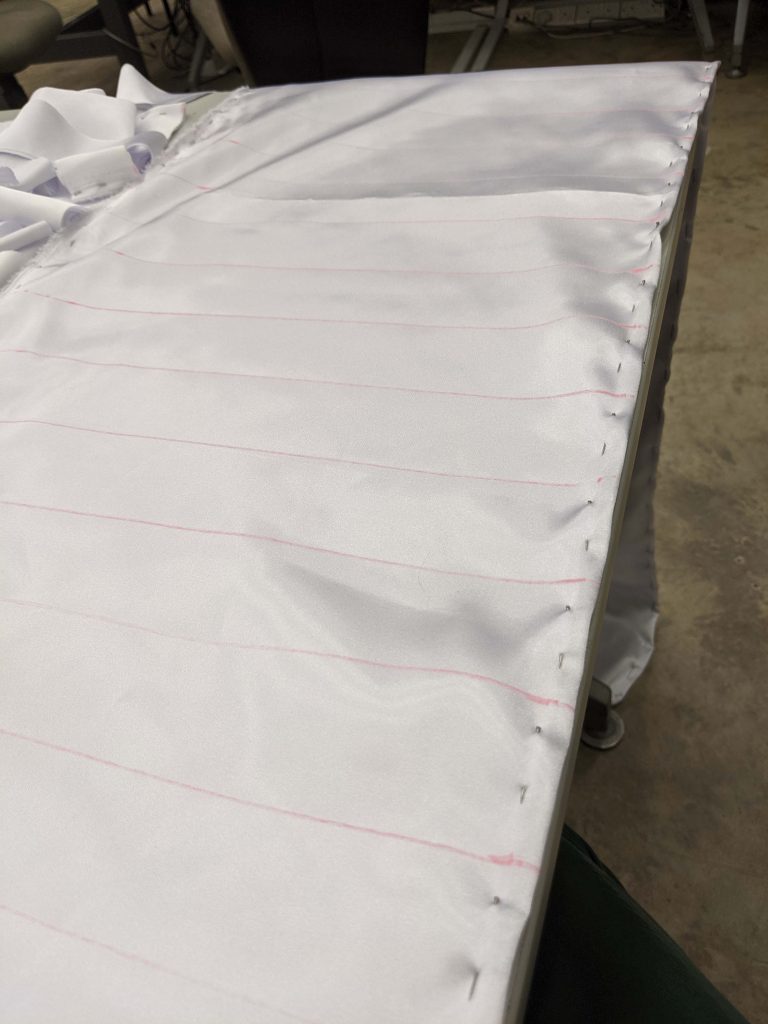 4. melt the strips so that the sides would not fray too much.

Then next would be to prep the LEDs.

Initially I wanted to use the common two pin LEDs and create an LED matrix. But I realised this would not be wise as firstly, I would have had to create a driver and each pin would need to be plugged into a digital out pin on the Arduino. Which would be impossible for me If i wanted to create hundreds.. Furthermore, I wouldn’t be able to control the brightness of the LEDs.

I then decided that it would be much wiser instead to cut individual LEDs from an LED strip and use them for the cloth flower. Using LED strips also provided me with more control as I could easily code patterns and control the brightness.

So the next step was to prep the Individual LEDs from the LED strips.

7. Strip the wires and Solder the ends.

8. Solder the wires to the LEDs.

9. Fold the cloth around the LEDs.

The biggest problem with the LEDs was the time required to make them. Currently each LED flower takes about 15 min to make. Even the slightest added step would be compounded into hours of work when making hundreds. For example. I tried removing the “melting the sides of the cloth” (step4). Step 4 requires about a min per strip. But 200 strip alone would mean 3hrs of constant work.

10. Solder the LED strips together 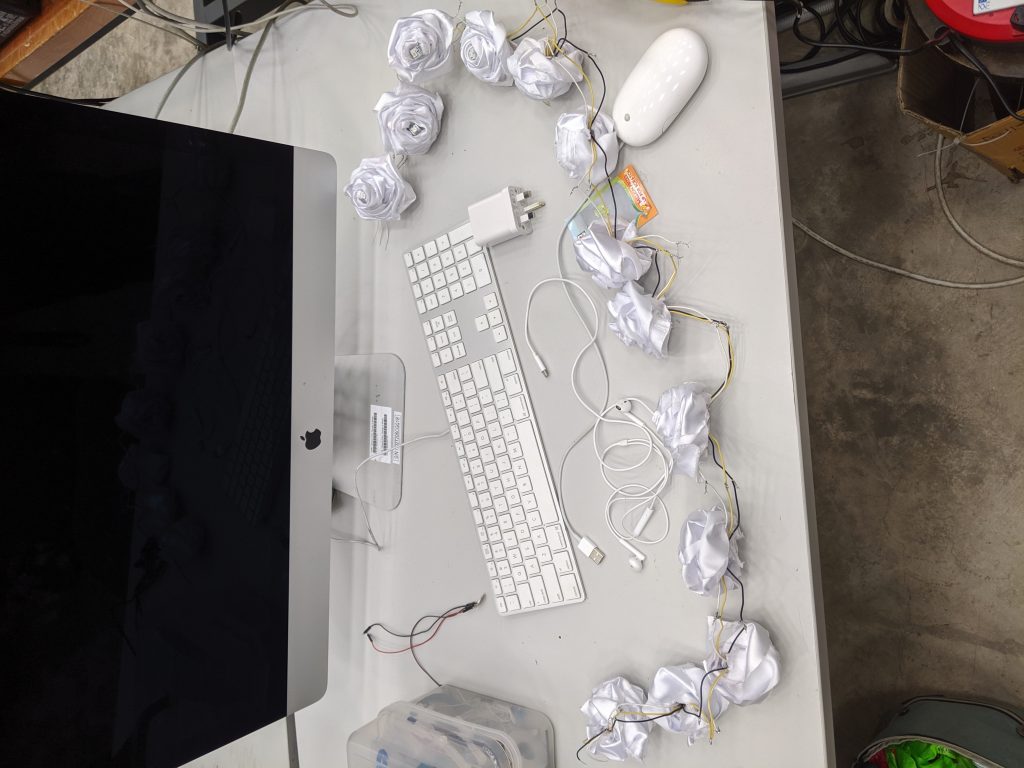 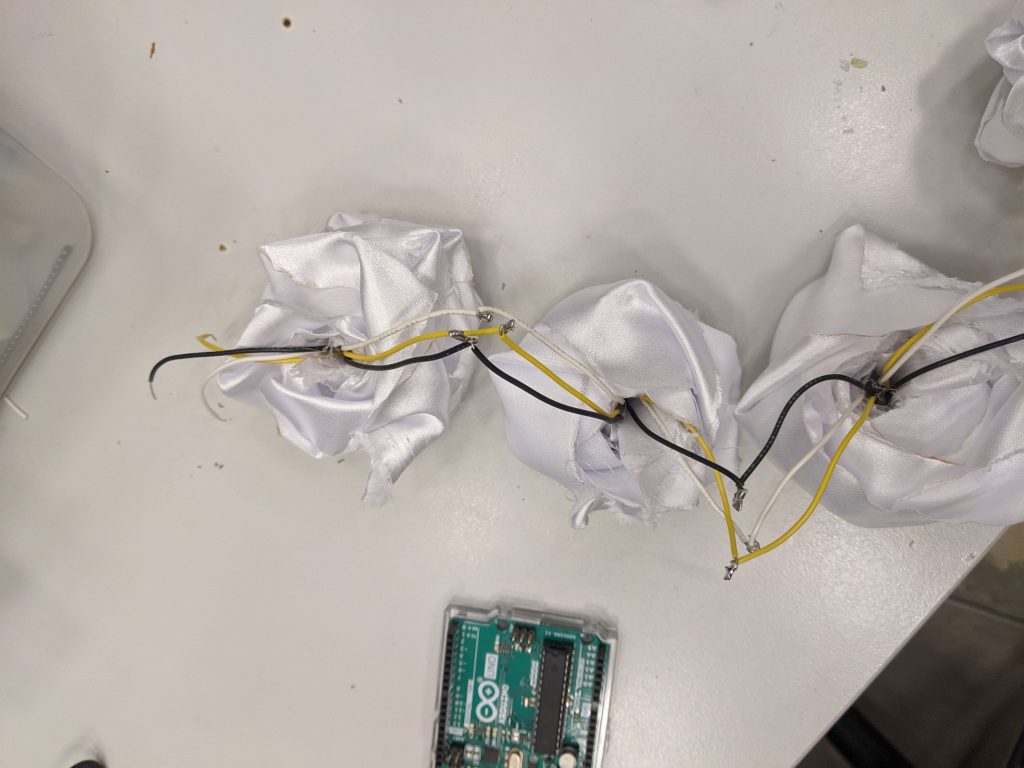 After Soldering the strips together I made sore to hot glue to joints to insulate them to prevent any short circuiting .

I first tested with a set of ten to ensure that it works fine and perfectly. 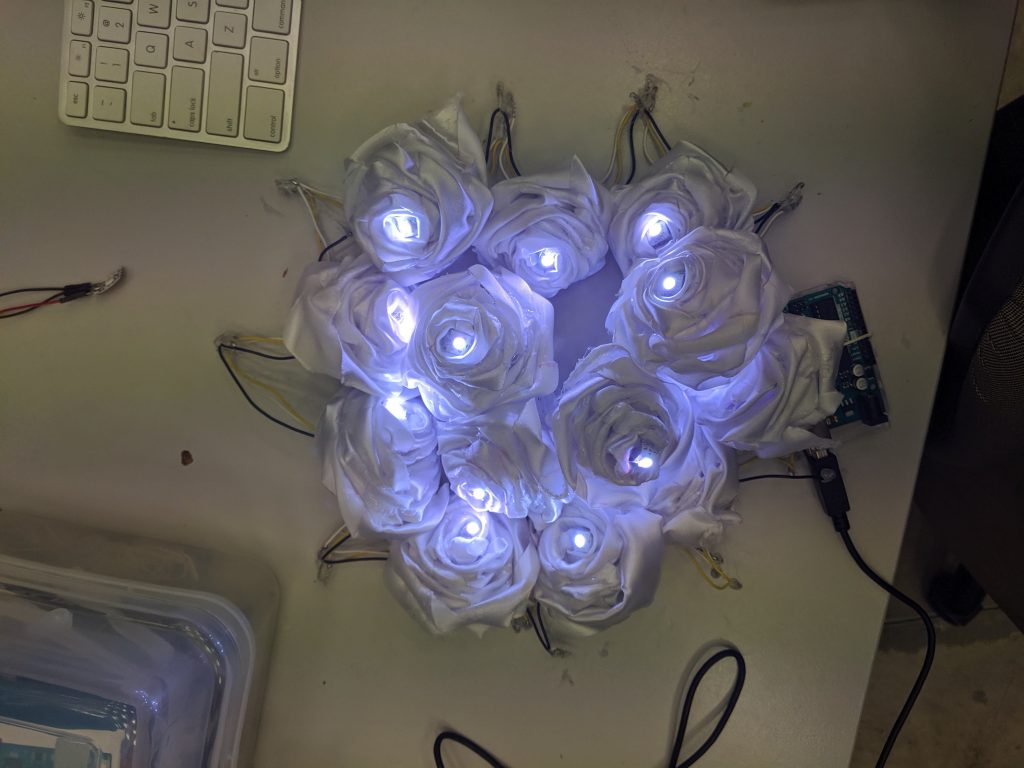 Powering 10 however is simple enough as only very little power is required. When making hundreds however, we would have to draw power from an alternative power source. Thus I decided to us an LED power supply which is an AC/DC power adapter. It converts power of a higher voltage to 5V and 10 amps.

However even with a ten amps power converter, I realised that it was still not enough. The LED lights towards the end of the string of flowers start to turn red because it was not being supplied with enough power.

Thus I decided to get more power converters and connect two strips in parallel with two different power supplies.

For the pillowcase I managed to sew it myself. Although it was a little too big, it managed to look pretty decent 😀 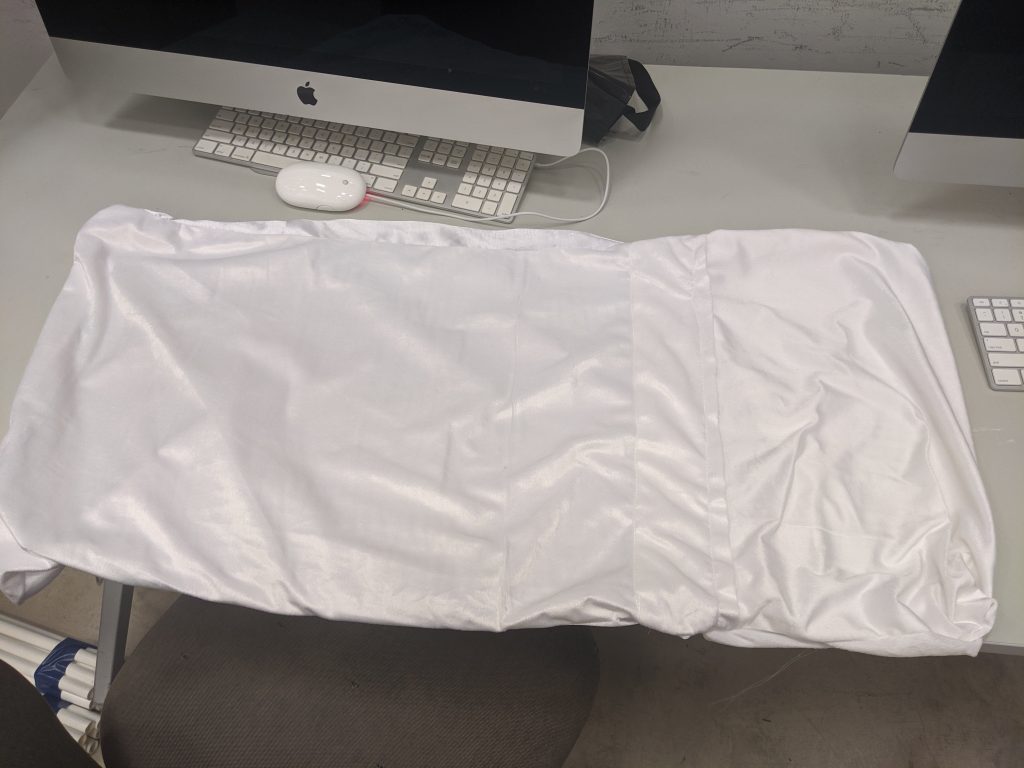 12. link lights and audio to sensor

I also decided to add a heart bet audio that would increase in BPM according to the pressure sensor to add another sensory dimension.

I linked the lights and the audio to the pressure sensor. This pressure sensor’s value will change when all the panels have been placed on top of the frame and this would trigger the change in lights and audio.

For the final setup I used the dance studio this time instead of the truss room. To hold up the white cloths I used Cstands connected by bamboo poles and sandbags. 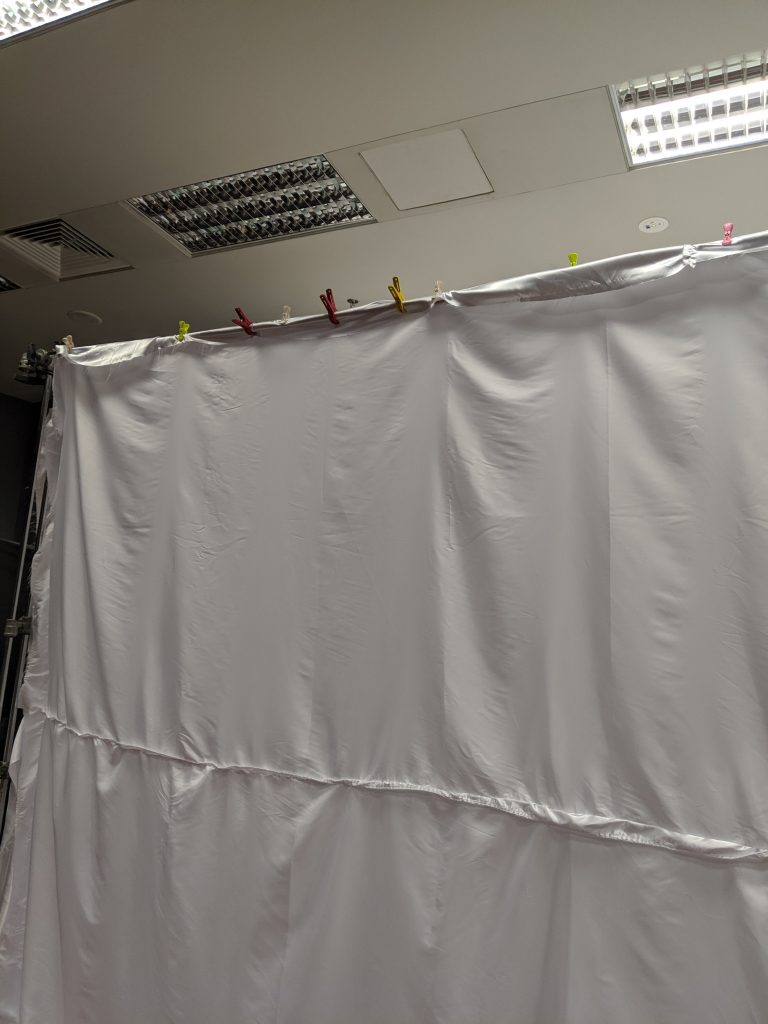 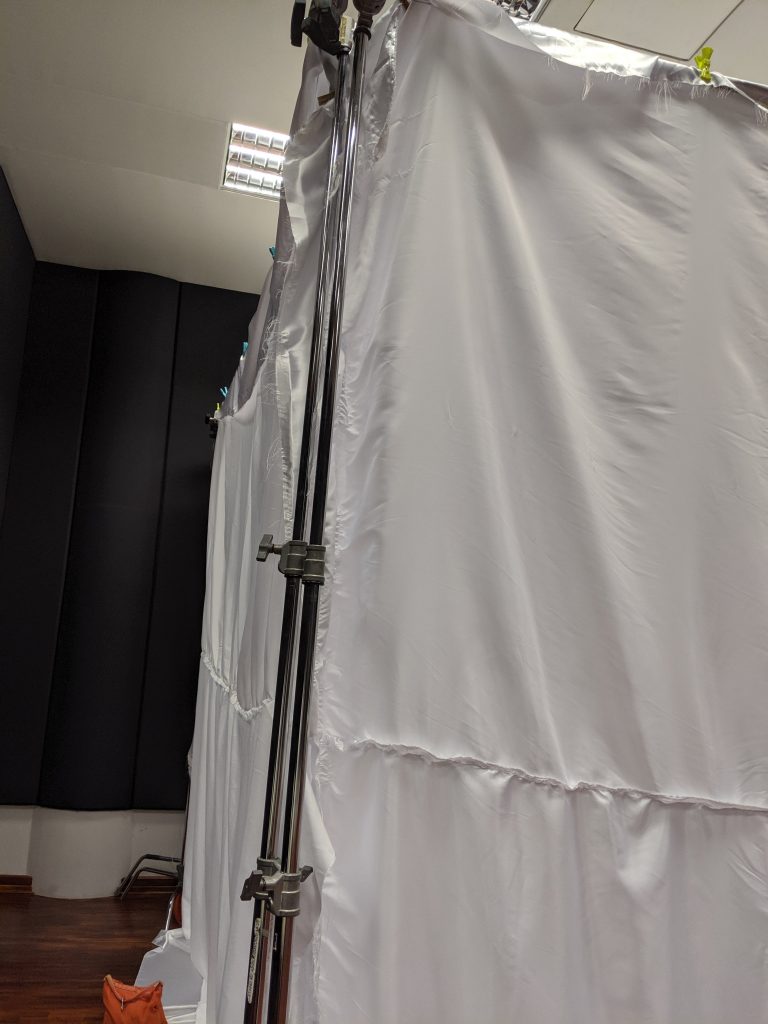 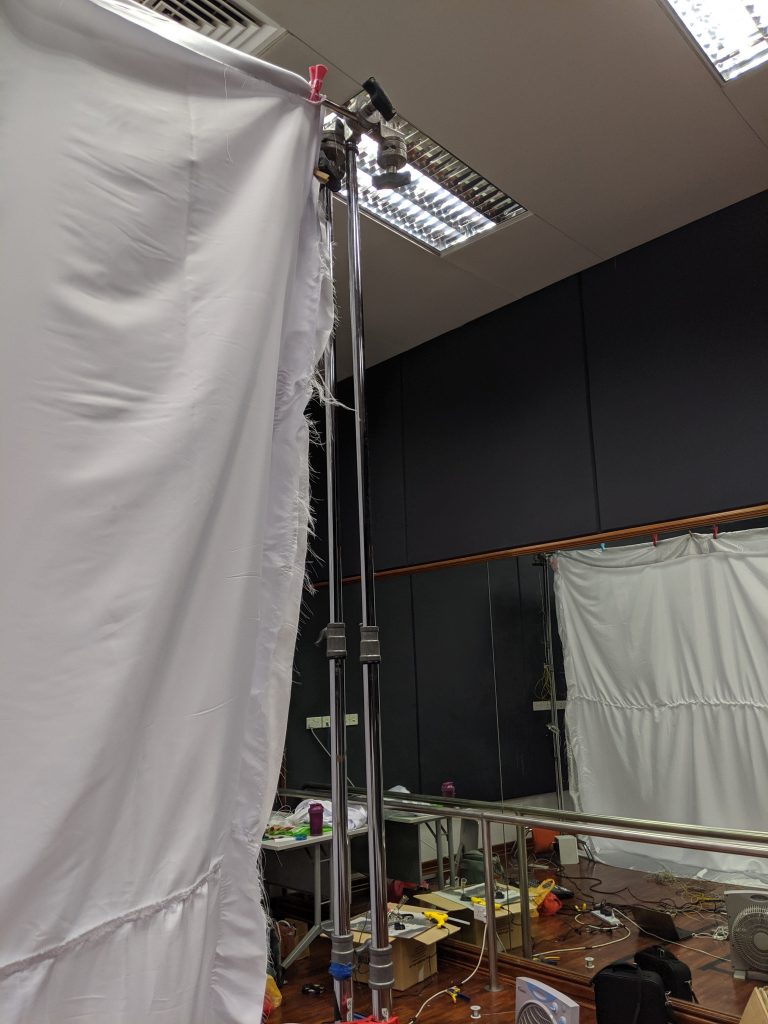 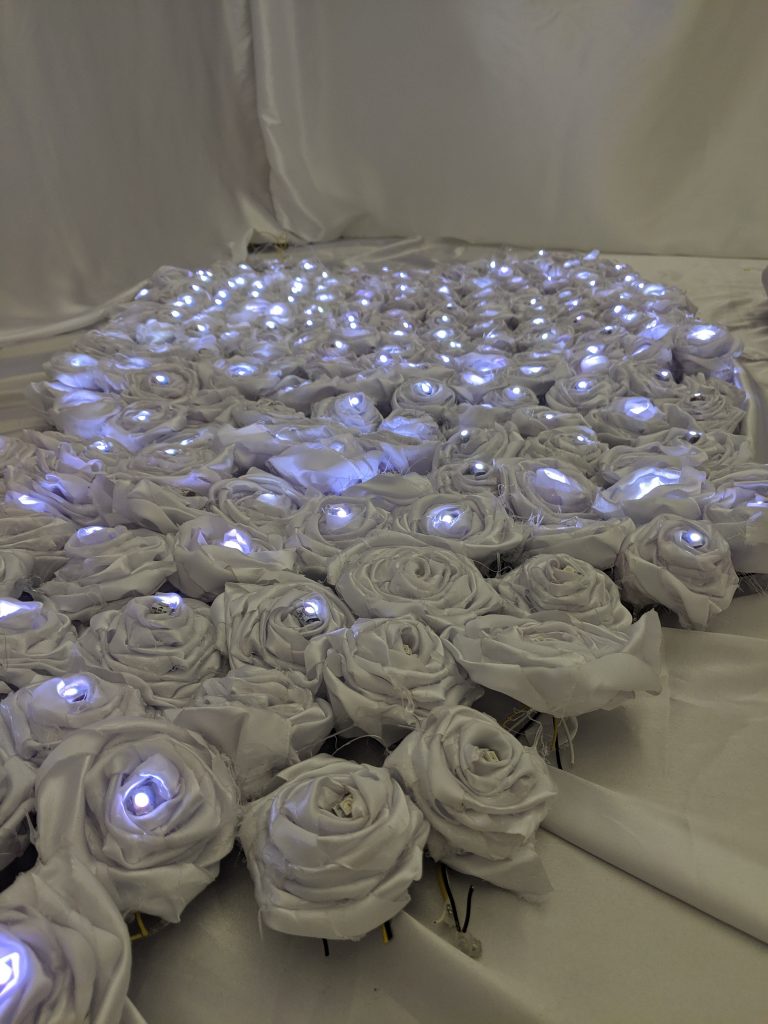 So I received mostly positive reviews for my final work. At first I would’ve thought that the tarot card segment would’ve been too awkward and disjointed from the experience, but surprisingly it was pretty well received. When I brought put the flowers to be exhibited outside with everyone else it was still pretty decently received and a lot of people had fun affecting the lights by playing with the pillow. However, when it was just the flowers, I felt like the artwork became very superficial and people didn’t read much into it other than just having fun with the pillow and the lights. 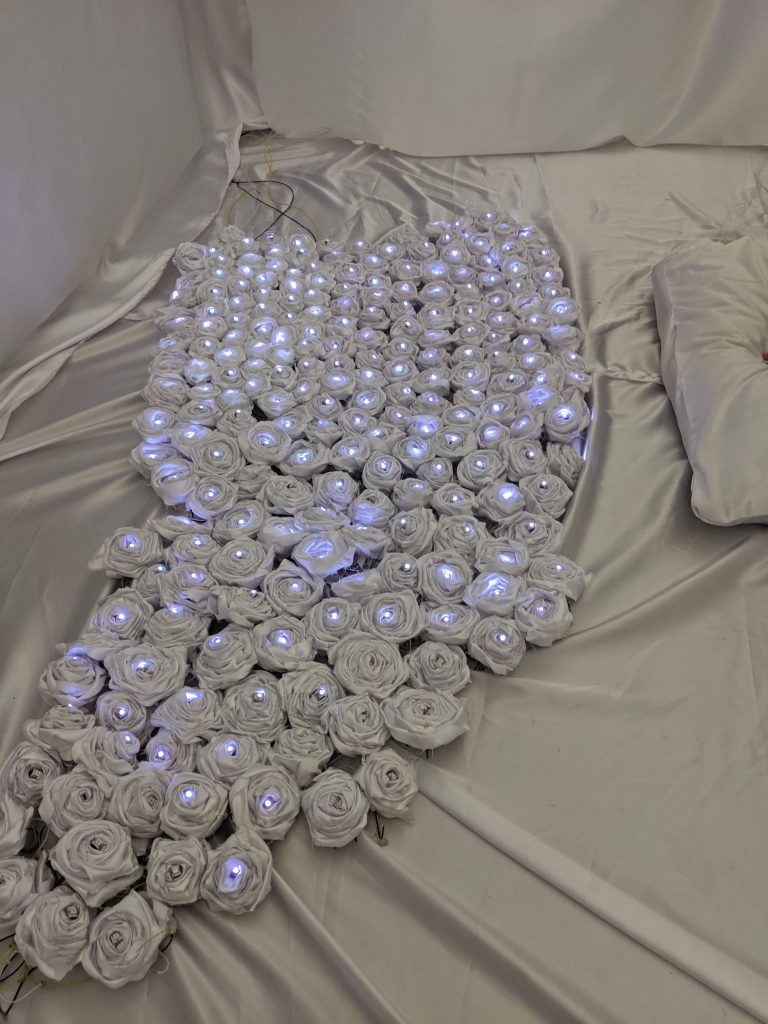 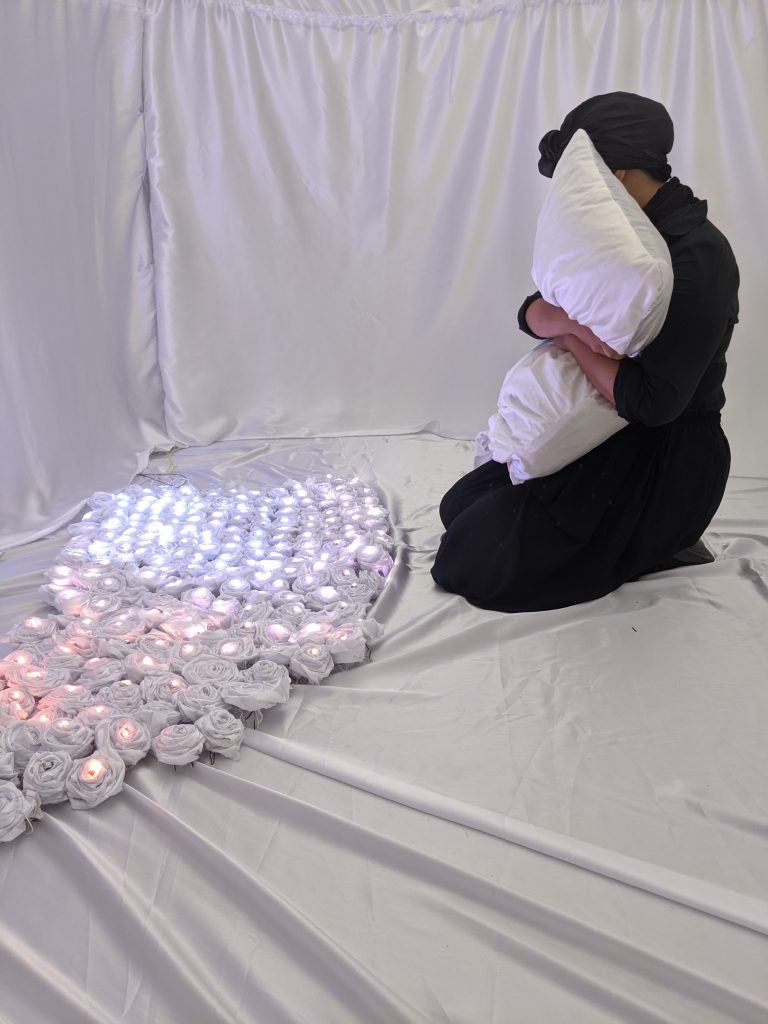 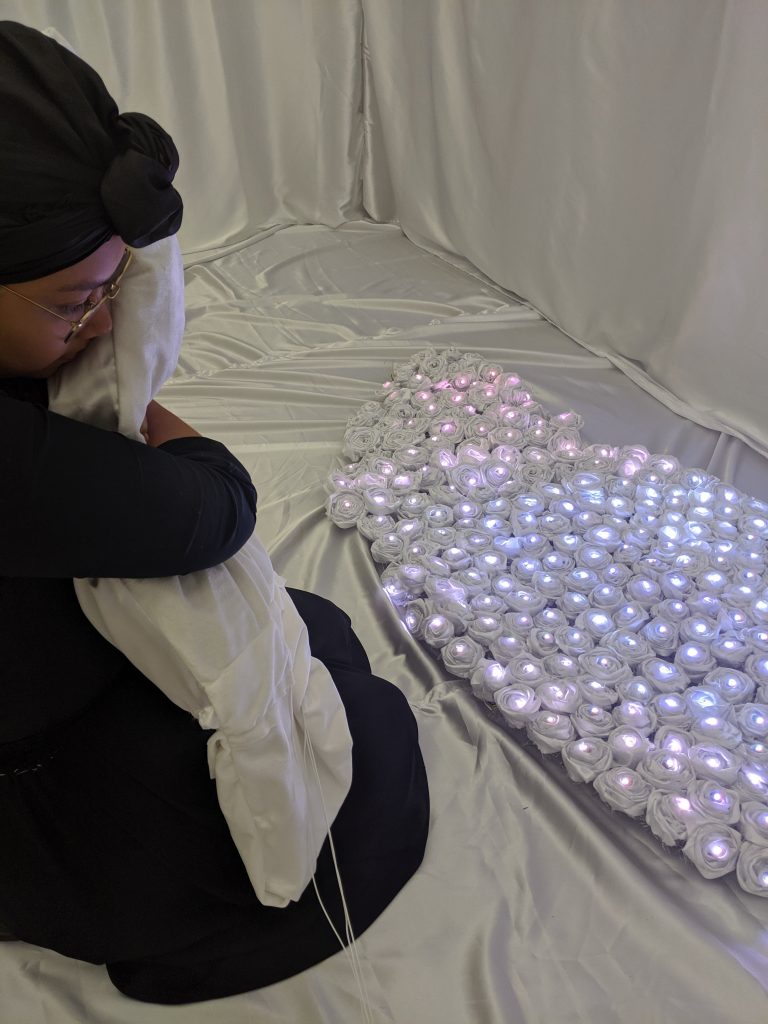 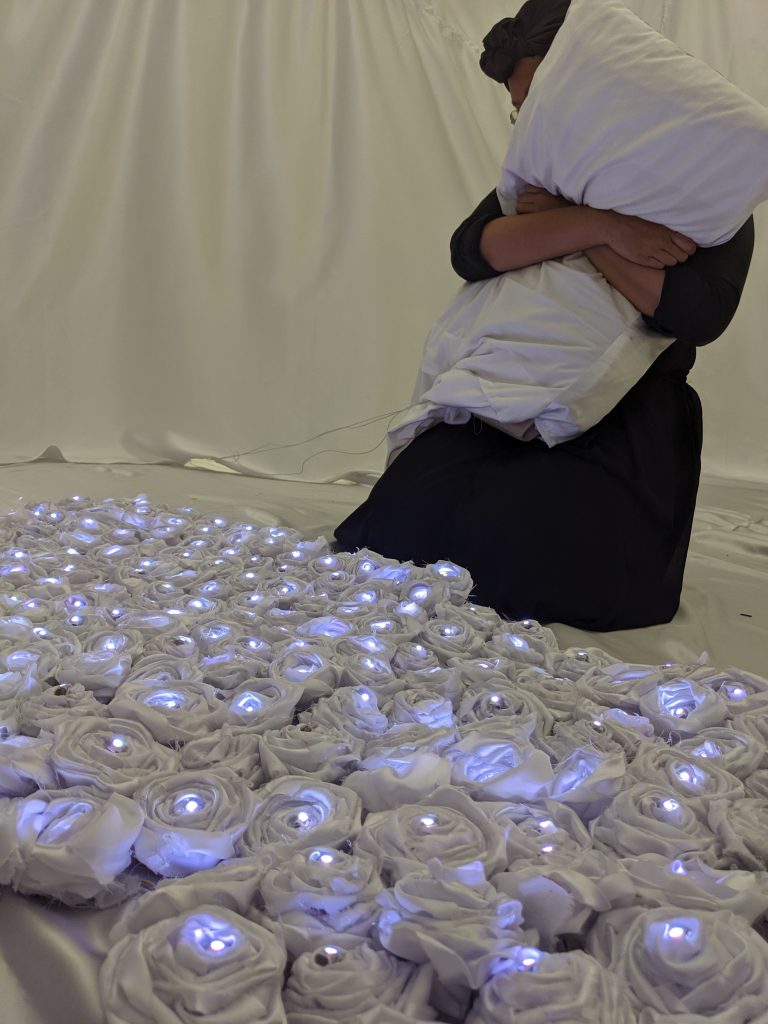