How Games Move Us: Emotion By Design

by Muhammad Shaherfi Hadi on March 11, 2019 in Research 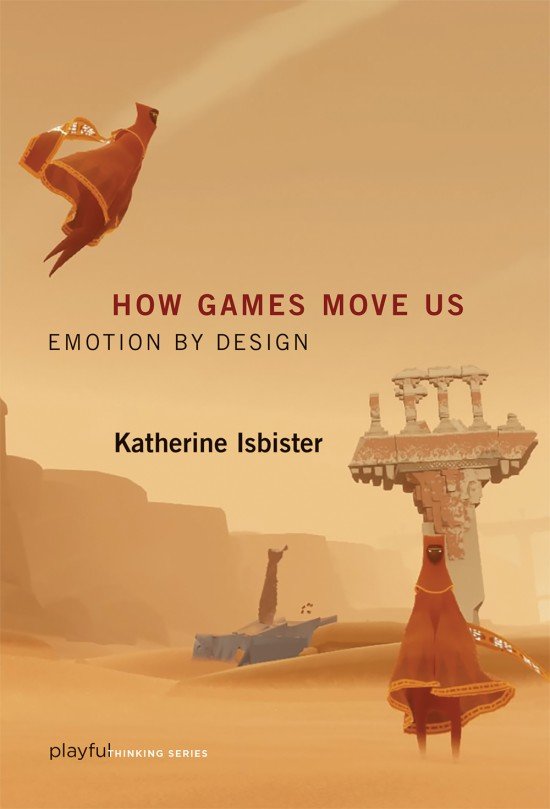 Why we need to analyse games

In this book How Games Moves Us: Emotion By Design, Katherine Isbister places importance on how we as a community should raise our literacy in game appreciation because games are so popular . And I agree that this is important to us as game designers because, if our audience is smarter than this opens the way for use to use more nuanced design, or even create more daring and bold forms of interaction. As with any medium, the audience has to be taught first how to interact with it and then how to appreciate it properly. And the way they are taught is through the work they produce. I would parallel this to how in film, cuts used to show the transition of time was first perceived as strange and disorienting. And now it is rampantly used. To do this we have to not have an individualistic view of the works it produce but see how it fits and work as a whole alongside the community.

Katherine Isbister then goes on to the crux of her work that is how we create emotions through games. I would agree with Isbister that games have the potential to elicit more emotions than other mediums (not that other mediums can’t draw out emotions) because games have the added depth of interaction. Simply put it is the difference between sympathy and empathy. The difference between feeling excited from watching a soccer match to feeling excited,nervous and anxious because you are playing a soccer match. Games allow its audience to feel added depth to emotions because games unlike other mediums introduces the avatar. The avatar you control, be it a character designated by the game designers or a character that you custom made yourself, becomes an extension of you to participate in the world presented to us by the game. This is the reason why we can feel a closer connections to the characters in the game, as it is not just watching characters interacting with each other like in a book or a movie, our avatars makes it such that it is by extension, us interacting with these characters. This same reason is why games allow us to feel guilt, pride and regret as the choices made in game are our choices. To know that games have the potential tools to elicit such emotions is important for us as game designers as we create experiences and these are tools that we can use to create more meaningful games.And just like in film which has techniques to create powerful moments of emotion such as close-ups, we have our own techniques in games too.

This is what Katherine Isbister describes in the book as providing players with the ability to create meaningful choices and flow. Meaningful choices I feel comes when the choices comes at a cost be it personal sacrifice to make such decisions. Most current games I feel not only give the illusion of choice but give the illusion that their choices have any ramifications. With flow I think its a little bit more complex. Flow is closely linked with immersion and to have immersion, you need emotional investment into the game, but at the same time, you need flow to help draw out emotion. But it is undeniable that games by  nature, once again due to the interactivity, can create flow more easily than other mediums. In the book, Ibister quotes Mihay Csikzentmihalyi’s 8 factors that help induce flow.

I agree with Jenova Chen in that this provides a good framework for us to follow in our game design. (Sidenote I am a huuuuuugeeeee fan of Jenova Chen’s work and I really want to read his master’s thesis). Though what we should focus on as game designers should be the first factor that is challenge. We need to find a balance between challenging an easy. As a game that is too challenging would create frustration while one that is too easy would create boredom. Finding the sweetspot coupled with good game mechanics and aesthetic to retain the player’s attention enough to bring about the other factors.

The common misconception of the image of a gamer would be a teenage boy alone in his room clicking away. This is a very conservative and outdated view of gamers as gaming is actually a very social activity. With esports, local multiplayer games and mass mulitplayer online games, you can’t deny this. Gaming forms communities where its player forms meaningful deep connections and us as game designers should be aware of this fact.

I think this is best demonstrated by local multiplayer games as they provide experiences for people t bond together. As Isbister puts it, “There is something deeply satisfying and bonding about overcoming a challenging mental and physical situation.” What I am worried about however are online competitive games that seems to be proliferating in the market now due to its economical power. Although like sports, competition can be beneficial, but games because of the option of anonymity has a the potential to create toxic environments too. We have seen in the early days of MOBA how harsh and critical the community can be and we as designers should be weary of this and actively moderate our community to prevent it from degrading in that direction. When it comes to the actual game design, we need to be aware that games can just as easily give negative feelings of frustration and anger as we can lose in games. Thus we have to be critical, what kind of culture would games that require you to win to have fun breed?(I think ladder systems that punish you heavily for losing perpetuates this) Is it possible to let players have fun even if they lose?

Games unlike other mediums also allow for innovative interfaces to be part of the experience. And with innovative interfaces comes physical activity to be part of the experience. We can just look at Nintendo, with the Wii and the Nintendo switch to find great examples of this. Physical activity then on a chemical bodily level helps elicits emotion due to the increase in endorphin production. Isbister also argues that Physical Play in games also draws more attention and it helps elicit emotions as emotions are by nature “contagious” (ever laughed because someone is laughing?).

With Physical Play, I think we need to be aware that game design is no longer simply restricted to sofware and codes. Hardware is also now a huge part of the experience. Yes we may be limited in hardware as we have standard interfaces with the standard design of game consoles, game controllers and PC. But is this a box that we have created by our own making. Once again I think Nintendo proves that innovate interface design can be done successfully.

I think it is undeniable that game is a powerful medium due to the added dimension of interactivity. But as game designers need to be more aware of the nuances of interactivity. Yes although interactivity can inherently by its nature make things more fun and elicit emotion, we have to ask ourselves constantly, how do we push this to the limit. Now that we are aware that games can do this how do we consciously weave it into our design. Making players feel powerful by overcoming a challenge, making them feel guilt and regret because of the choices they made a few chapters back, these are all powerful tools as they allow as to help players achieve catharsis and at the same time if we are not weary, it can create damaging experience. I think How Games Move Us: Emotion By Design, is an important read for any game designer who wants to create meaningful emotional games.