Impossibilities of Being: Fairy land

by Muhammad Shaherfi Hadi on November 5, 2017 in Final Project, My Work, Project

The place I chose to create a soundscape on was fairyland.

I’ve always been interested in learning about the fae folk ( I am a big fan of the fantasy genre). But I didn’t want to create something that was outright pretty and bright, or disnye-esque. I wanted to show the darker less known side of the fae folk. How they were conniving and mischievous and a different being but yes still very pretty. Thus I knew final piece had to have something off putting about it.

My innitial idea was actually inspired from a early memory of mine where I was almost spirited away ( might have been a dream I am not too sure). The scene starts with me opening the door and then transitioning into the fairy world. To potray the beautiful aspect I would use scenes of the forest and river, calming nature scenes. To counterbalance this, I used scenes of hands reaching out from the river, fairies in weird masks dancing and a scene of  hag at the end to be the creepy or off putting factor.

Here I used the lo-fi storyboard to first plan out what scenes I wanted to be included, the camera angles for each shot and roughly how long each shot would be.

For the art direction, I decided to go with RPG maker’s pixel art as I wanted to see the effect of juxtaposing pixel art with realistic sounds. 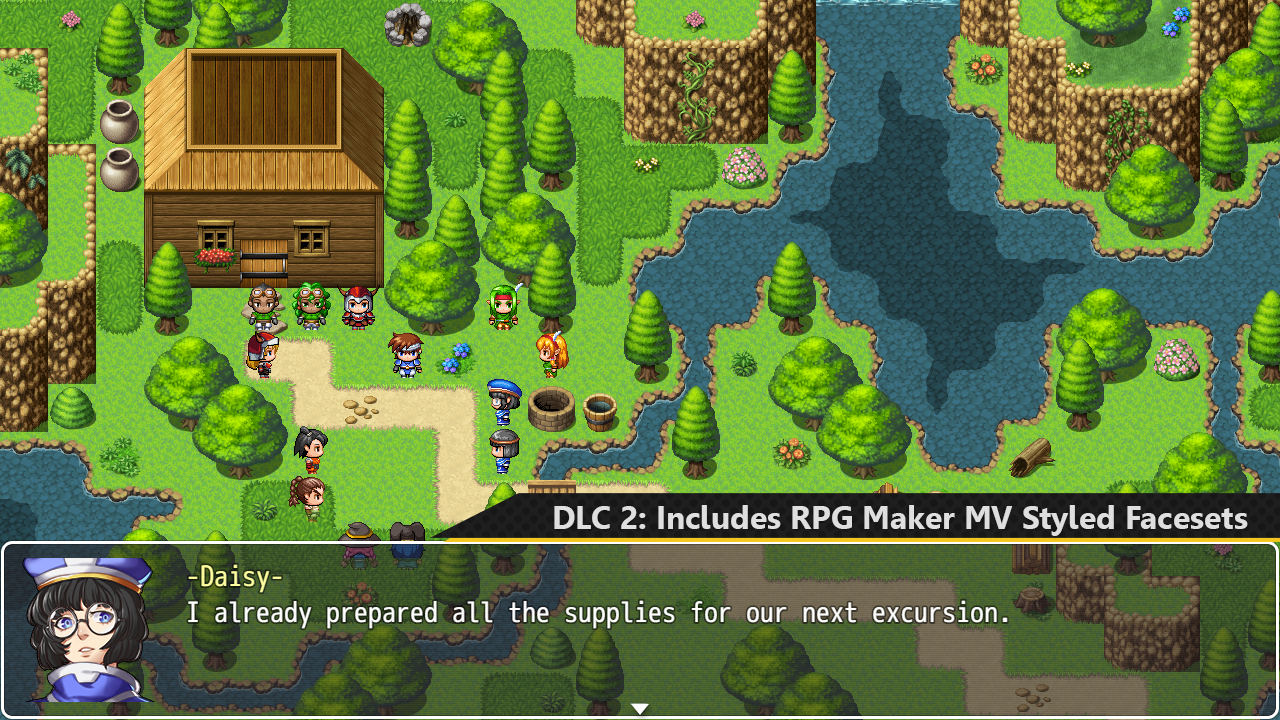 However, as Kee Yong had commented, RPG maker’s pixel art is 48×48 which is still very modern and thus the sounds effects wasn’t out of place in the video.

Either way I went ahead with the map creation.

I started out with scenes of a serene Plain, but to make it off putting , I decided to add in ruins of an ancient city ( to hint at inhabitants), unnatural cracks  within the environment and jarring purple trees.

Side note: It took a long time to slowly shade the different elements and make the map look as legit ( like a real game) as possible, but I enjoyed myself wheeeee 😀

This was when my initial plans completely derailed. After creating the map, I decided that it was much more appealing if I created sounds to enhance the experience of the player traversing the landscape, in other words, create a soundscape to enhance the landscape, instead of creating a video. That being said, I was unsure of what the narrative should be like, as the video can’t just have someone simply walking around. Putting this aside, i decided to make map 2 first.

Initially i wanted 3 other map besides after this, but after testing out and recording the player moving about map 1 and 2, the length of the video was already about 40 seconds. Thus at this point I decided to change my story completely.

I used a mood graph to plan out how the audience should feel as the move from map to map. 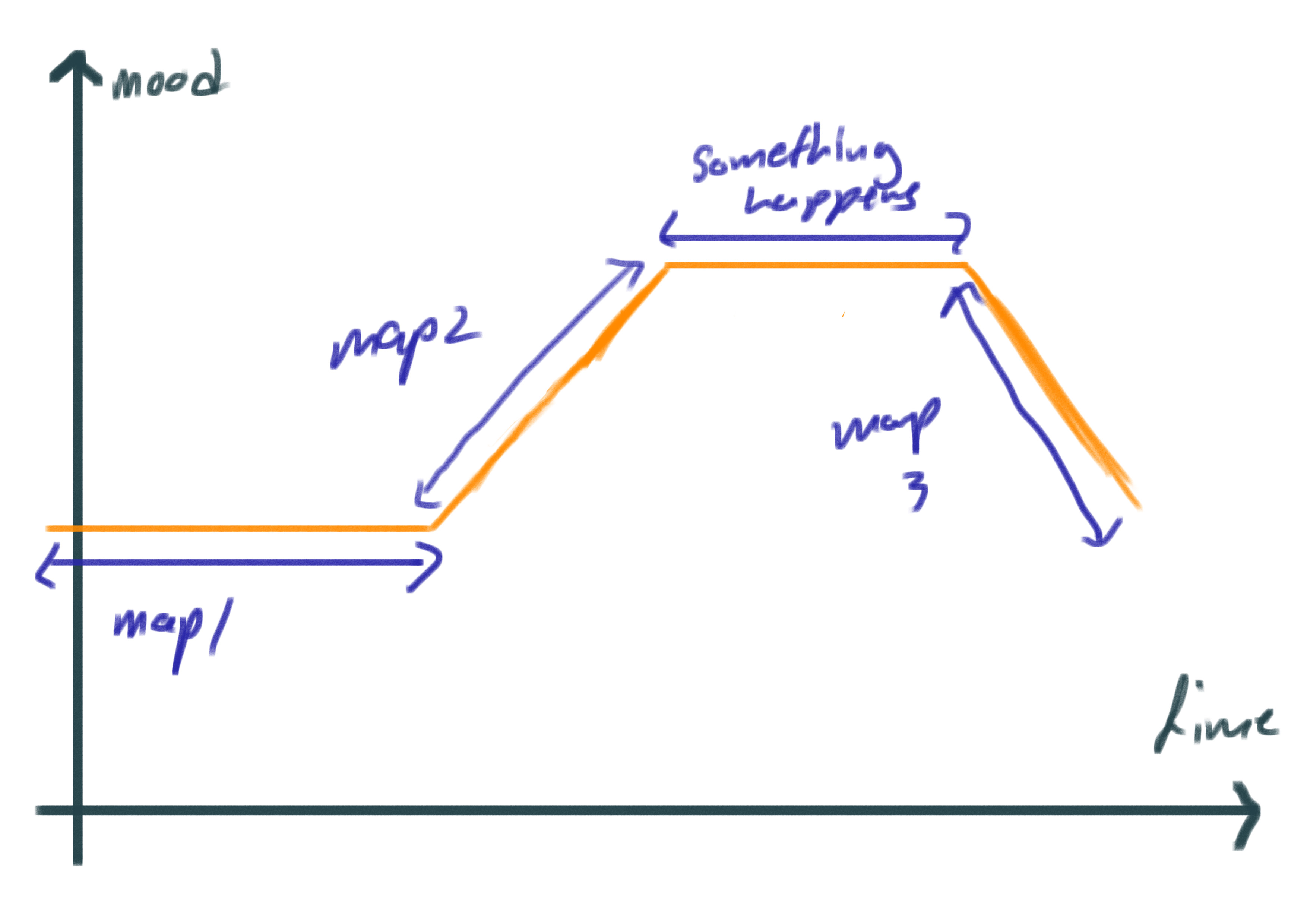 From there I mapped out how the player would move through map one and 2, how the weather would change, and designed map 3 to be the “anti-climax” to the video.

I made sure to add a soft blue lighting to the map to add ambiance and made the map sparse (in terms of flowers) to match the mood.

Lastly, to add to the aesthetics of the map I tried to do a little bit of simple animations (first time doing animation)

From this, I recorded on screen game play. From there I editted the sounds I recorded to match the video.

First, I decided to do the biophany for the maps. For this I recorded the sounds of frogs and crickets in ntu.

I also recorded the sound of flowing water ( actually water flowing from a huge drain near my dorm) to serve as the sound of the waterfall.

Now when mixing these sounds together, I tried to play with the volume of the sound to suggest distance and play with which ear you would hear more of the sound from to create space.

Coupled with the sound of birds I downloaded online, it produced a pretty convincing biophany.

Next was the sounds of the rain and thunderstorm which I also obtained online.

I also recorded multiple different sounds to be the off putting factor after the thunderstorm.

I ended up going with the mrt sound as the landscape has started to turn more into a dreamscape and I thought it would add to the surreal factor if being in limbo if I added sounds from the real world that were seemingly unfamiliar.

Lastly, taking inspiration Hans Zimmer and his use of silence,

I decided to use white noise to transition from the peaceful scene of the plains to the deep forest.

Lastly, I also used the art of foley to recreate the sound of foot steps on grass, dirt and wet grass.

Grass footsteps were creating using a dried rose that I had kept.

And lastly for the dirt path with rain, I used wet rice.

I’m impressed I was able to create convincing sounds myself hehe.

Combining all of this with a suitable melancholic background sound I obtained from RPG maker, i created the final video.

Thank you and have a nice day.