by Muhammad Shaherfi Hadi on February 5, 2019 in My Work, Research

Pokemon Go (2016) is an Augmented Reality mobile game developed by Niantic and The Pokemon Company. In Pokemon Go, players travel a to scale digital map of the real world,where the player’s avatar location is based on the player’s real world GPS location) to collect and evolve the hundreds of different species of Pokemon to complete the Pokedex (an encyclopedia of pokemon). At the same time, players travel to Pokestops to collect resources and battle at PokemonGyms for king-of-the-hill matches. Both Pokestops and PokemonGyms are located at key areas of interest in real life.

(I wont lie, I have chills whenever I see this trailer. My heart is just filled with a sense of nostalgia)

The creators of Pokemon Go, John Hanke and Tsunekazu Ishihara and  have expressed that their intention with creating this app was mainly to get people to get out, explore the world around them and interact with one another more. Needless to say they have succeeded doing just that, at least initially. During its first year, Pokemon Go exploded and become a cultural phenomenon becoming on of the most played, most downloaded and top grossing mobile games to hit the app stores in 2016.

Within the first week of it’s launch it seems like everyone was playing it. The effects could be felt on a personal level. Walking around you see on the move playing and you could clearly identify people who were playing Pokemon Go. Needless to say, this had a profound impact on the spaces around us and our perceptions of the places around us.

In week 2, we talked about tuning a place and I still hold on to the opinion that when tuning a place more often than not it is to tune it for a purpose. Even areas without a purpose, lets say a patch of green land, they become places of interstice, patches of rest and thus its purposelessness becomes in essence its purpose. Now in the case of media, I wouldn’t say that media gives a place purpose, unless it is a highly specific purpose like an art museum, but it does enhance the essence of the place. For example, huge TV screens blaring advertisement at a shopping district allows you to know that it is a shopping district. It does not give it purpose, the shops at the shopping district make it a shopping district, but the media makes us highly aware of this fact. Similarly, an art installation in a public place makes the general public more aware of the essence of the place and I think in essence, this is what Pokemon Go does.

Pokemon go being an Augmented Reality game places attention within the places around us by firstly adding to the reality we live in. It makes us look at previously banal places as something more. Oh that coffee shop down at the corner, it is now a pokestop. Did you ever notice it before this, well you notice it now.

One might say because Pokemon Go is so wide scale (unlike a art installation at a specific place), its affect at placing importance might be diluted. In my opinion its large scale is exactly why it works. It simply gave the push people needed to go to these places by enticing them to move about, but gave players the autonomy to realise for themselves how beautiful these places are.

What didn’t work well & How it can be improved

Now besides the technical issues with the game (the bugs and the rawness of it all), there were many social issues that popped up due to the explosion of the game and the examples are numerous. Within the first year of Pokemon Go, we have heard many countries expressing concern about internal security with people trying to enter high security locations to capture pokemon. Or concerns over players playing pokemon at places that demands solemnity such as the Hiroshima war memorial park or the Auschwitz museum. We even heard of players getting into accidents and being public nuisances. I say these problems arose because the world wasn’t ready to handle such a phenomenon that entered pop culture seemingly overnight. And these problems were slowly solved as we got more accustomed to Pokemon Go and is the fad slowly reached a more calmer state.

What irked me however, was that although the Pokestops had the names of the locations, it didn’t go further with providing us with more information. The pokestops could have easily included a short paragraph about significant places. Yes it is a daunting task for a company to provide information on all these places. However it is possible for a company like Niantic to do so. They already have a partnership with google maps (this is how they created their first game Ingress (2012)) which has a database of information. And besides that they have a huge player base in both Pokemon Go and Ingress that can help. They have created the Pokestops and Portal locations in Pokemon Go and Ingress Respectively based on player submissions and the could have done the same, just with information on the locations instead. My suggestion would be to make each pokestop a sort of bulletin board where players can leave messages and encourage players to type out information on the place. Yes the problem with this would be that there would be trolls who would post nonsensical things. But I say do not underestimate the public. Moderators can always be hired and have a flag system like most forums. I think this could lead to some interesting situations where players will post sweet stories and their own personal connections with seemingly banal locations which would elevate the places.

When I heard the news about Pokemon Go I was instantly excited, mainly because it was Pokemon and I was a long time fan of the series. But when it actually played it, it became slightly special. It was the first time I went out with my sister to walk around the neighborhood. To be honest it was the first time I actually explored my neighborhood. I’ve always been on of those kids who went straight home after school everyday. And playing Pokemon Go made me discover new playgrounds that I never knew existed. There was even a beautiful black monolith nearby made by the students of Siglap Secondary school which I would have never discovered without this game. Places that I now know because of this game. 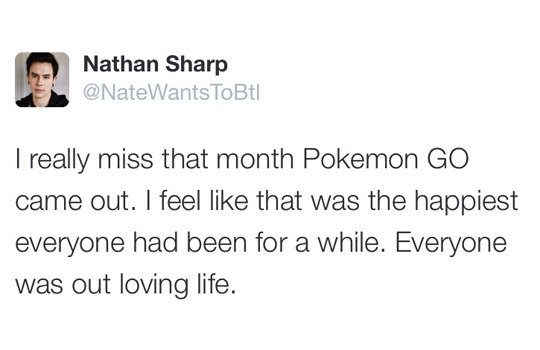 PokemonGo has more and more players each day and it is still growing although the fad has died. But I long wish the day to see a group of random strangers crowded around a playground again because they wanted to catch a pokemon.

With that, I thank you for reading this post and I hope you have a brilliant day,

Kain, E. (2016, July 15). ‘Pokémon GO’ Is More Than Just A Game And It’s Bringing People Together. Retrieved from https://www.forbes.com/sites/erikkain/2016/07/11/pokemon-go-is-more-than-just-a-game-its-a-phenomenon-thats-bringing-people-together/#69a0f7fb214f