by Muhammad Shaherfi Hadi on August 20, 2017 in Pandora

Something that interests me 3 dimensionally

And I started thinking why the John Delinger spectacle box looks so much more regal than the normal one and this made me start to notice the smaller design details that made it so. Firstly, I was reminded that John Delinger spectacles took inspiration form gentleman thieves so it would only be natural for their spectacle box to also fit this theme, that is they (at least to me) look like treasure boxes that almost invite you to open them. Firstly, and most notably is that the box itself is black all around, a very regal colour, at the same time mysterious. The box itself has no indication of it being a spectacle box and only a small embossed logo at the top of the box. Making you wonder, what is inside.

The black colouring and the matt leather finish also made the spectacle box look expensive.

The front of the spectacle box (where you would open)is also slightly thicker than the back (the part where the hinges are situated) hence this to me subtly invites you to open up the box.

While the normal spectacle box is small and can fit in one hand, designed in a compact manner and for travel, this spectacle box is is bulkier, fits in two hands and hence I would say the designers created it with not ravel in mind, but display. It was meant to sit on a table and capture the attention of anyone who walks in.

Other design aspects you would notice is that it is only symmetrical from the front view, but from the side view it is not. The hinges I would say play with the half- half rule as it is situated midway through the length of the box and the empty space without the hinges are about half the length of the hinges.

Strangely enough, the hinges themselves are not situated midway through the height of the box. It is slightly higher than the midpoint line and slightly lower than the 2/3rds line hence it plays neither with the half half rule nor the 1/3rds rule. Thus one design improvement I would make would be to shift the hinges slightly higher till it reaches the 2/3rd line to give an overall better aesthetic appeal.

As the word I had to try to express using my 3D model was Weight/Mass, I tried to make a part of the model as as “heavy” as possible, in a sense, try to give it the illusion of weight. Here initially I used the top box as it was black and black to me was a heavy colour hence the top box I used this box as the one on top as it seemed the “heaviest”. However, there were other elements besides the colour that I feel expressed this notion of weight. First of all was that I used horizontal planes for the base and the top, this makes it feel as if both horizontal planes are being pressed together, giving the illusion of a force acting upon the middle sub-ordinate portion hence, the illusion of weight. Next would be placing the sub-ordinate right below the dominant portion. This I feel accentuates the presence of dominant box and hence in a way increases its weight within the entirety of the sculpture.

Also, finally to make this model look aesthetically pleasing, I played with the 50-50 ratio that is, the sub-ordinate “linking” box was positioned exactly midway for both dominant and sub-dominant box.

So how can I improve on this?

I can maybe try to find and use a bigger box for the dominant part of the sculpture to really exaggerate the top part of the box being “heavy”.

Here, I have replaced the S.O with toothpicks using the Gestalt Principle.

We still See the S.O as a whole despite being broken up and here, the concept of levitation is more apparent. Maybe, if used for the final model, I can try making the S.O out of acrylic dowels to push the idea of levitation further.

However, the problem of being unable to see the S.O and S.D from the top view and the S.O from the bottom view still remains.

For the first model I tried to express weight by making something seem “Heavy”so for the second model, I tried the converse that is try to make something look weightless. To do this I tried to make the dominant box seem like it was floating, and I did this by playing with vertical lines. The arrangement of the boxes gave the illusion of ascension and hence made the dominant box seem lighter. One problem with this arrangement however, was that the sub-dominant box was too small to support the dominant box and hence this made the design not make sense. However, I realised  when attached to a wall, the illusion of weightlessness still played well as shown below. Also, from this angle, it looks pretty much like a lamp doesn’t it 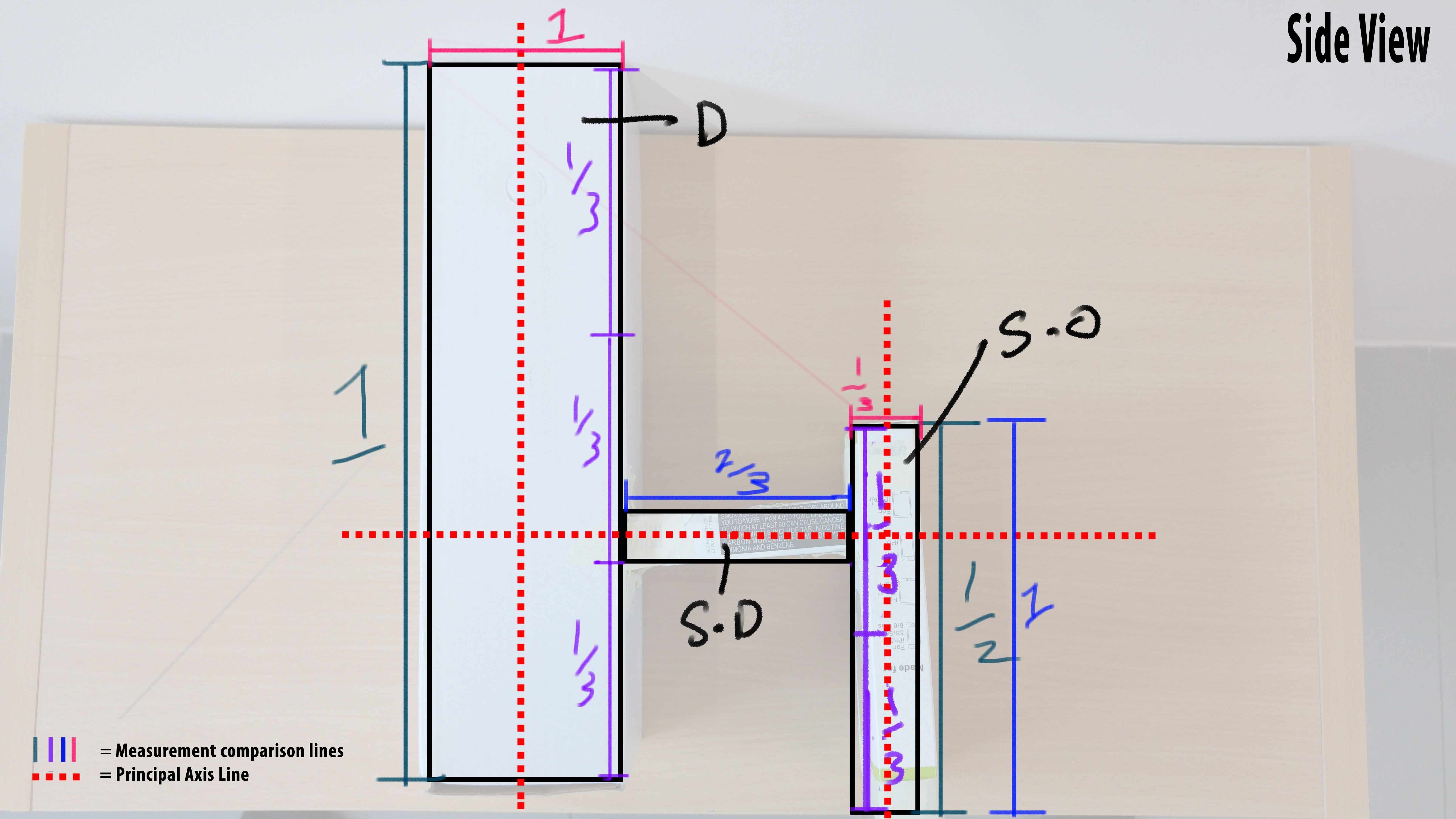 So how can I improve on this?

Maybe I can have a bigger box to replace the sub-dominant box (and hence making that part the new dominant one) to make it support the rest of the structure and also omit the need for a wall to make the message come through.

Form the top it becomes apparent that the sizes are pretty similar and you aren’t able to really distinguish the  D, S.D and S.O.

Also, from the front view, you are unable to see the S.D or the S.O. Thus the sculpture become less interesting as 1 axis is removed.

Hence, although this sculpture conveys the idea of of “anti-weight” or levitation well, it is not a dynamic sculpture due to there being similar sizes. To improve this, I could have used a much smaller S.O and an S.D with a smaller breath. Also, I could have skewed the arrangement such that the sculpture not flushed.

For my 3rd sketch I thought about how a cantilever can give something a sense of mass/ weight if something is hanging at its end. This is because the it feels like a force is acting upon the cantilever, in this case the subordinate small box is putting a clockwise force upon the structure and the dominant box is counteracting this motion and supporting the structure. 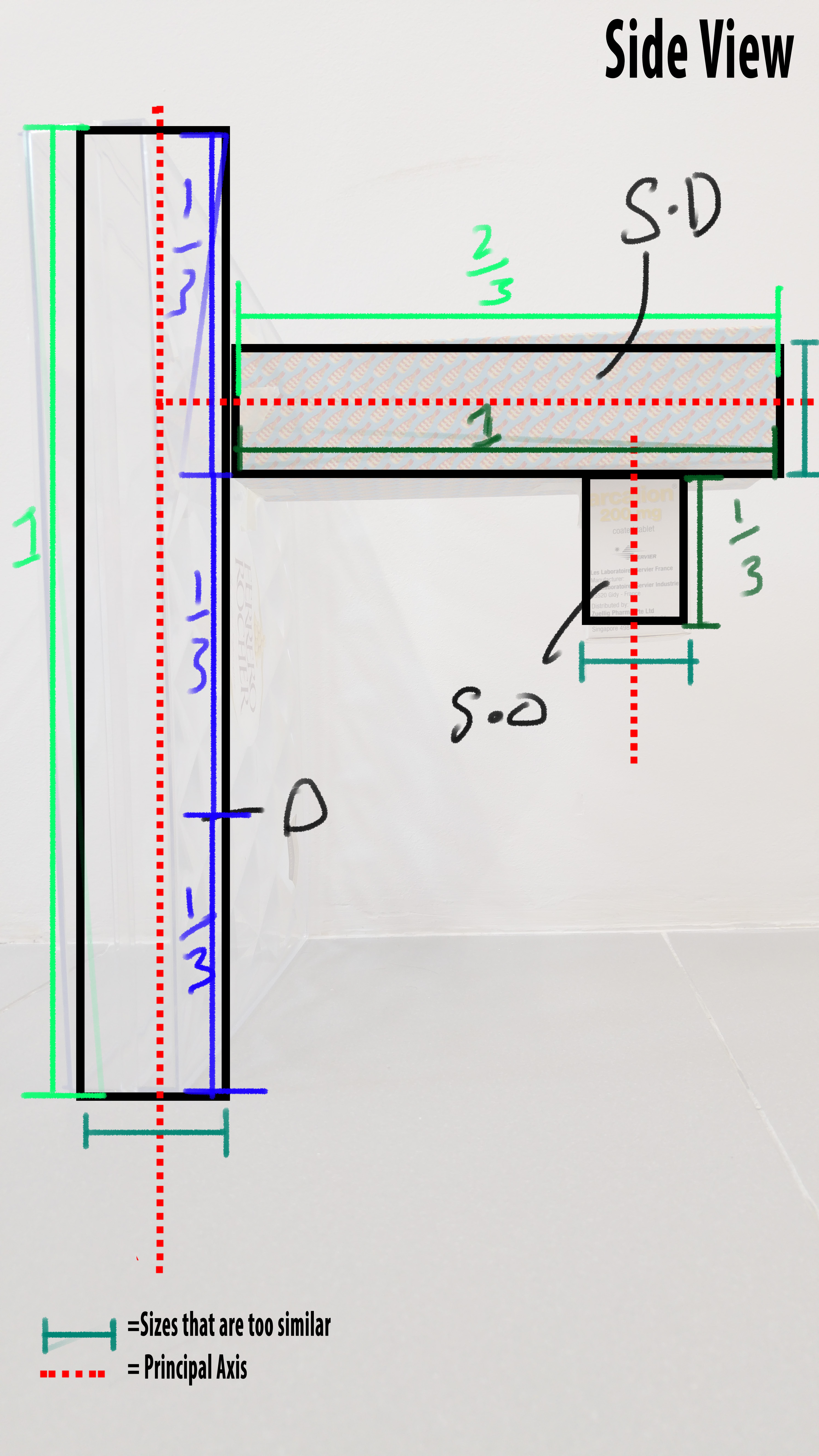 Things to Improve on:

As you can see, from certain angles , the S.O and the S.D look like a cluster of similar masses and from other angles, the S.O can’t be seen at all and thus makes the sculpture look not as dynamic is it could be. To do that maybe I can use a an S.O that is bigger, but skew it such that it will not be blocked by the S.D and still can be seen from the top view.

Here I used a different box to serve as the S.O. One that has a longer breath. Then, I took it a step further by skewing the S.O to make the sculpture more dynamic.

Now, the corners of the S.O can be seen when the sculpture is viewed from the top view and the principal axis still remains relatively the same.

To make this sculpture look better, the S.O has to be cut in half breadth wise so that it would be more obvious as an S.O and also so that from the front view it will not look as similar to the S.D.

The upwards direction, the white colour of the Dominant box and the stilt legs all give the impression that the top box is very weightless. Looking a this sketch, it reminded me of shinto prayer shrines. Where you would write your prayers on a slip of paper and insert it through the tiny hole in the box. In this scenario I thought it would be very apt to make the box look weightless as it would simulate bringing your prayers up to heaven.

However, from the top view, the sculpture becomes less interesting.

Things to improve on:

Firstly, maybe I can try to make the sketch more interesting by making it asymmetrical. This way, all 3 elements will be seen when the sculpture is viewed from all angles. Also, I could play with different joining techniques such as wedging. This way, from the top view, the sculpture won’t look flushed.

Working from the initial sketch, here I decided to make it asymmetrical by shifting the S.D and the S.O Elements. I have also decided to wedge the S.D into the D.

Also, as you can see I have also played around with the rule of thirds. Personally, I think this has solved most of the problems that the innitial sketch had.

Even from the top view, you can now see all 3 elements. However, the D now becomes the S.D and vice versa.

And thus, my final model plays with the contrasting ideas of trying to make something that looks heavy levitate.

I also played with the rules of thirds where I can to make it look as aesthetically pleasing as possible.

I tried to apply the gestalt principle. By breaking up the S.O, into dowels and using negative space to imply the box, I was hoping to put forward the levitation effect as best as possible.

I also made the model asymmetrical so that all elements can be seen from the top and bottom.

Although all elements can be seen from all angles, from the top and bottom view, the D becomes the S.D and vice versa.

But for the most part, the roles of all 3 elements do not change.

After seeing how my 4th sketch reminded me of the shinto shrine for wishes. I thought about how this would change if I made the dominant box where you would put the wishes black instead. And thus I thought it can become a hate box. Instead of putting your wishes inside, you pen down and put in slips of paper containing all the negative thoughts that you harbor. But as you put these hateful messages inside, you will see your own reflection ( that is why the dominant box is made out of reflective black acrylic). This induces the individual to reflect every time he sees himself. As the hateful thoughts stack and the box get full. The individual can pull out the middle Sub-dominant box to pour the hateful messages out. He will then see a scroll that appears with the words “Do you see yourself as you pen down your Hate? Never fear for there will always be Hope.” Hence it is a hate box that compels the individual to catharsis. In every sense, this hate box is an individual’s Pandora’s box.

Application from another angle:

From the side view, the model looks like it can be a futuristic gun, with the S.O being the gun handle, the D being the gun barrel and the S.D being an aiming device.

This project has really thought me the meaning of what truly is a Pandora’s box. At first, I thought the project would be easy as on the surface it is simply manipulating 3 boxes of different sizes to create a sculpture. But, I soon realised that to create a dynamic stucture, there are many different design considerations to juggle all at the same time to the point where shifting or changing even one element in the slightest bit would open a can of worms an thus the name.

However, this project was definitely as enjoyable as it was challenging and if it is one it has thought me is to have my eyes open and consider every small detail and rule when designing a 3D structure.

Side Application pictures for manipulation taken from:

Thank you for your time and have a nice day !