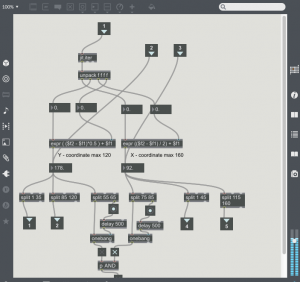 We’ve decided to add cv.jit.faces into the patch to detect the user’s face position and scale in relation to the screen to affect the type of music that will be played. We’ve improved the patch up so that the overall contrast and saturation of the displayed image will be increased depending on how close the person Is to the screen, rather than a randomiser.

Also, the lateral position of the user’s face will change the type of music will be played. I took some slightly altered SYNTHI 100 music and edited the clip so that it plays on the loop seamlessly. 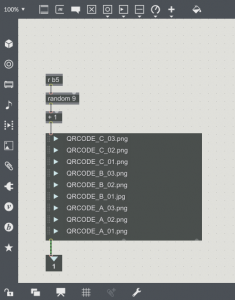 We also tried displaying a set of highly contrasting qr codes as they appeared in grids, and mash well with the grid rendering. The high contrast colors also meant that the shapes were highly responsive to distortions.