This session of the shared broadcasting worked out much better than in OSS, so I was able to do a little bit more. However, I noticed that in both this instance and in the first ever Facebook broadcast, I was unable to speak coherently without having the urge and compulsion to check if the broadcast was working, or if I was broadcasting anything that would be shady. I also refrained from talking a little as my mind kept switching back to the real world, and I was getting a little more conscious about how other people would perceive me if they saw me laughing to myself and talking to an inanimate object. (they wouldn’t know the context of the broadcast)

Upon returning back to school, I met back up with Anam, and noticed that there were some sound feedback looping, but the thing that intrigued me more was the idea of arranging both camera phones back to back and showing a front and back view of the scene as a panorama. Another idea would be to use a couple of mirrors to create a kaleidoscope effect. ( Facebook live might have a couple of filters which may allow this to happen.) 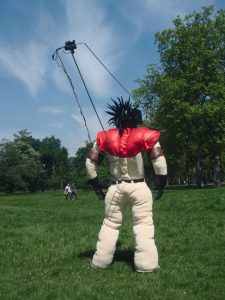 The last idea would be to blindfold someone with a makeshift “VR headset ” and broadcast the person in third person view. The idea is to have someone be disconnected from his own self.

For this to work, a third camera phone would be needed. This camera, which would be mounted on the person’s VR headset would not be broadcasting anything, but would be watching someone else’s broadcast. Both broadcasters would then be walking around with their camera, constantly changing their vantage points so as to disorientate the user. A lot of preparation would be needed for this to work.

Material wise, all I would need are a couple of cardboard pieces, some duct tape, and an elastic band.

Thie headset wouldn’t technically be an actual VR headset as it doesn’t use a pair of lenses, and it wouldn’t need to, since virtual reality headsets warp the imagery for immersion purposes, and are used primarily to see things in a first person perspective.

3 thoughts on “Reflections on the shared broadcasting”